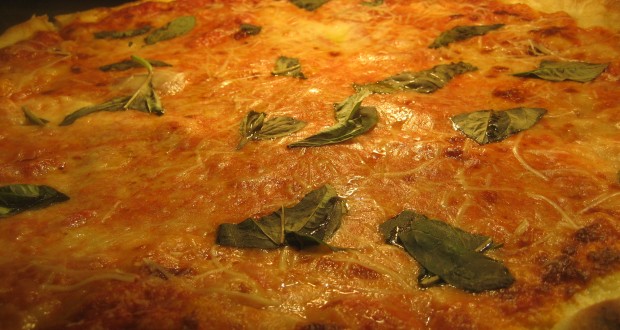 I recently took a Delta flight out of LaGuardia airport and lucky (or perhaps unlucky) for me that happens to be where Taste of Tagliare is located. The spot is part of a new food court that opened in the terminal alongside Custom Burger’s by Pat La Frieda among other more upscale bets than your …

Summary : This airport pizza spot is no better than Sbarro and should be avoided.

I recently took a Delta flight out of LaGuardia airport and lucky (or perhaps unlucky) for me that happens to be where Taste of Tagliare is located. The spot is part of a new food court that opened in the terminal alongside Custom Burger’s by Pat La Frieda among other more upscale bets than your traditional airport fare.

But what is so exciting about Taste of Tagliare was that it was opened by Dom DeMarco’s son: Dom DeMarco Jr. The elder Dom’s pies are heavenly… and the pizza at Di Fara is perhaps the most delicious food I’ve ever consumed. It wasn’t that I had the same expectations for pizza that I was about to eat at an airport… but I was more curious than anything else.

I spotting Taste of Tagliare immediately after going through security. It was 10AM and I was a little worried that they wouldn’t be serving pizza yet. But pies were coming out of the oven in all shapes and sizes (okay, well circles and rectangles at least). But before I was even given my slice, I had a rather interesting experience. 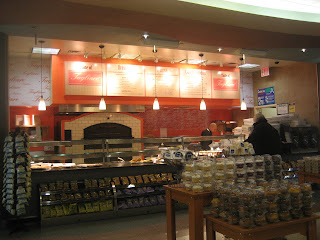 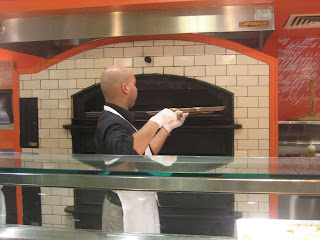 As you’ll notice above, the place wasn’t exactly hopping at 10AM. So I approached the counter, checked out the pies, and told the woman behind the counter that I wanted a regular slice of pizza. I figured that while my slice was being reheated I’d snap some photos, which I preceded to do. After a minute or so of watching me take photos, the lady behind the counter told me that photos were prohibited. “Of the pizza and oven?” I asked. “Security reasons. Speak with security if you have an issue,” she replied. I was a little confused, but put my camera away. I stood, alone, for five minutes while I waited for my slice to come out at which point the lady behind the counter said, “Can I help you with anything?” I told her I was just waiting for my slice, which confused her even more. “What slice?” she asked. I told her I’d ordered a slice of cheese pizza about five minutes ago. She mumbled to herself and stuck a slice back in the oven. Overall, it was just an odd experience.

I was excited, however, because the pies that were sitting out resembled those at Di Fara… aesthetically at least. But when my slice came out of the oven and I dug into it, my heart sank. It wasn’t that the pizza didn’t taste like Di Fara. It’s tasted disgusting. It’s not really worth breaking down why it tasted so bad, but it started with the cardboard-like crust. No flavor whatsoever. With tax, the slice came out to $5.44 making it more expensive than Di Fara (which is generally considered to be the most expensive slice in the city). My understanding is that there was previously a Sbarro’s in the food court. Please… come back! 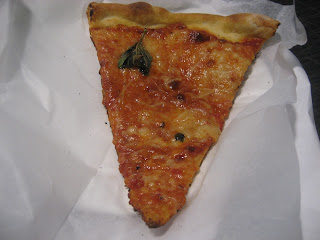 The place offers a number of other items — at least around breakfast time — including bagels and pastries. I didn’t try any, but I can at least hope that some of that fare was better than the pizza. 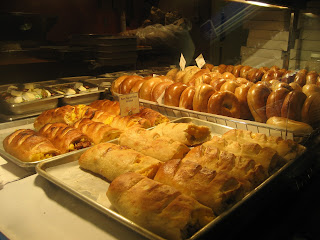 I went to Taste of Tagliare with the intention of comparing it with other airport pizza and not a place like Di Fara. Unfortunately, it was even bad for airport pizza. Next time I take a Delta flight out of Laguardia… it’s Custom Burger’s by Pat La Frieda for me!
airport pizza Di Fara Dom DeMarco jfk Taste Of Tagliare 2011-01-21
I Dream Of Pizza

Previous: The Persistence Of Pizza
Next: A Peek At Di Fara’s New Digs (An Upgrade!)