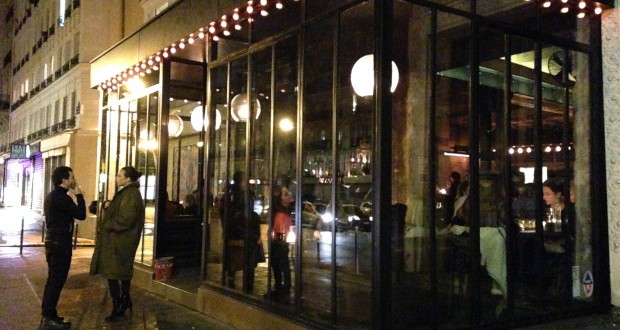 Posted by: I Dream Of Pizza in France, International, Reviews May 19, 2014

I recently returned from a trip to Paris during which I spent much of my time eating croissants, crepes, and other traditional French food… like pizza! Okay, it’s not a food you’normally associate with France, but Paris does have a thriving pizza scene. Yet in a city known more for its Michelin stars than slice …

I recently returned from a trip to Paris during which I spent much of my time eating croissants, crepes, and other traditional French food… like pizza! Okay, it’s not a food you’normally associate with France, but Paris does have a thriving pizza scene. Yet in a city known more for its Michelin stars than slice joints, there is certainly room for improvement.

As is typically the case when I travel, I spent a lot of time researching the best pizza places in town. There didn’t seem to be a general consensus on the best. Blogs and food critics vouched for different places and — truth be told — no matter how strong the accolades were for a given spot, the photos that accompanied those accolades never looked particular appetizing. Pizza Chic (website / TripAdvisor), La Bricola (website / TripAdvisor) and Santa Lucia (website / TripAdvisor) seemed to be popular choices (or just have good SEO), but their pizza didn’t look all that great. So I dug a little deeper and came across a spot called Grazie (91 Boulevard Beaumarchais) which is located between République and Bastille around the 3rd/11th arrondissement. Not only is Grazie a pizza place, but also one of the most highly regarded cocktail bars in Paris. I figured even if their pizza wasn’t good, at least I might get to enjoy a tasty cocktail. And I was exactly right.

I arrived at Grazie around 7:30PM on a Wednesday evening — certainly on the early side for dining out in Paris. The place was pretty full, but there was an open seat I was able to grab at the bar. As I knew I’d be dining alone, I brought along some reading materials, but was not able to read. You see, it’s very dark inside of Grazie. Too dark. I needed to hold a candle over my menu to read it. You’ll notice a lack of photos in this review because, frankly most of my shots are just pitch black. It’s not necessarily a bad thing. They’re trying to create a certain vibe… a vibe that might not suite someone who requires artificial light.

The bartenders seemed “friendly” — although that’s a little hard for me to assess because I don’t speak French and they were not eager to converse in English. The highlight of my evening was the cocktail I ordered — a basil honey martini. It looked like something that Slimer from the Ghostbusters concocted and it was deliciously sweet and refreshing. But that was only half the reason I was here.

Along with the cocktail menu, I was given a food menu featuring 16 pizzas. There was no English version of the menu, but between a combination of guessing (champignons = mushrooms, for example) and looking ingredients up on my iPhone I was able to get a pretty good sense of what was on each pie. Other than an 8 euro pizza bianca (which is just bread and olive oil) pies start at 11 euros and top out at 20 euros. My 12 euro cocktail and 18 euro pizza cost me the equivalent of $40 USD which makes Grazie more expensive than just about any pizza place in New York City.

My 18 euro pizza was the Aurora which features tomato sauce, buffalo mozzarella, and basil. This is quite an up-sell from the margherita pie (which features tomato sauce, mozzarella, and basil) and only costs 11 euro. That’s $10 extra for BUFFALO mozzarella. And to my surprise when my pie arrive the buffalo mozzarella had been put on AFTER it came out of the oven. I guess it’s a French thing — but it’s a big fail in my book. I felt like I was eating a flat baguette — not pizza! It was actually tasty-ish. The mozzarella was delicious. And I had no problem with the sauce (they skimped on the basil). The crust resembled something you might get at a Neapolitan pizzeria. So all of the elements were there. It’s just that I would have preferred my cheese melted on my pie. 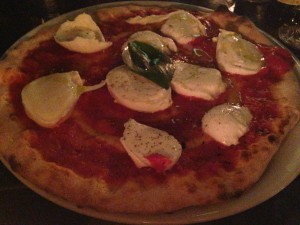 I loved Grazie. But I’d recommend you stop by for (an expensive) cocktail or two and then check out a restaurant with better food. You can certainly get a better value for your money. I could give you a laundry list of awesome places, but here is one that is a bit under the radar: Au Bouef Couronne (188 Avenue Jean Jaurès). It’s a classic French bistro with English menus and the most friendly service you can imagine. For 34 euros (so about $8 less than I spent at Grazie) you can get an appetizer, juicy steak entree, dessert, wine and coffee. I left that meal feeling much more satisfied than I did after eating at Grazie.

But man… that basil honey martini was great.