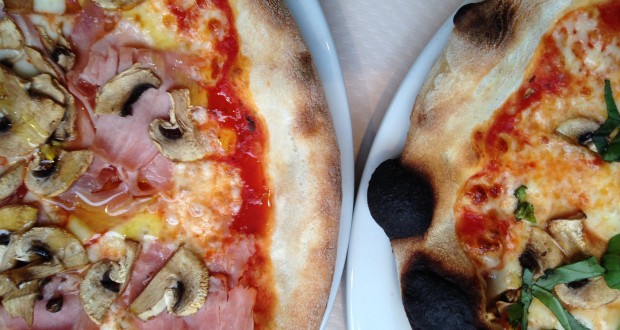 Posted by: I Dream Of Pizza in France, International, Reviews May 5, 2014

I recently went to Paris and after an unsuccessful pizza outing at Grazie,  I decided to cut my losses and avoid pizza for the rest of the trip. With my limited time in town, it made sense to focus on the important stuff… you know, like, steak frites. However, the day following my somewhat odd …

I recently went to Paris and after an unsuccessful pizza outing at Grazie,  I decided to cut my losses and avoid pizza for the rest of the trip. With my limited time in town, it made sense to focus on the important stuff… you know, like, steak frites. However, the day following my somewhat odd experience at Grazie (where they put the mozzarella cheese on pizza AFTER it comes out of the oven), my coworker suggested we grab some lunch at a pizzeria around the corner from our office. Of course, I was down.

Although I did a lot of research before and during my trip — trying to pinpoint the best pizza places in Paris — it was not surprising that our lunch spot was not on my radar. Pizzeria d’Ampere (1 Rue Ampère) is a local spot frequented by residents and workers in the 17th arrondissement where it’s located. It’s not the kind of place that might generate buzz on food sites or that Parisians would trek across the city to try. But maybe they should… 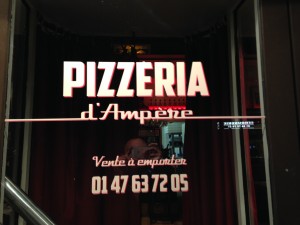 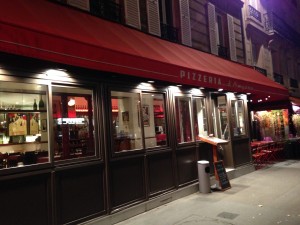 The place was packed around 1PM on a Thursday and we had to wait about 10 minutes to be seated (almost all of the 40 seats were empty when we left at 2PM — affirming the notion of a lunchtime rush). Their menu consists of all kinds of Italian dishes including five versions of linguine and four of rigatoni. Not to be outdone, there are also 22 pizzas — 20 red pies with sauce and two white pies with just cheese — on the menu. At 9-15 euros each, they are certainly not a bargain. The toppings are generally consistent with what you might find in an Italian restaurant in the United States, the most exotic “pie” being a tuna calzone with tomato sauce, mozzarella, tuna, and egg. No thanks.

I kept things simple and ordered a mushroom pie. It was quite tasty. My favorite part might have been the mushrooms which were cooked to near perfection. They weren’t sauteed, but luckily they also weren’t raw — somewhere in between. The crust was soft with a slight char and although the cheese and sauce didn’t stand out… they also didn’t detract from the pie. Because going here was a game time decision, I had absolutely no expectations and was pleasantly surprised. 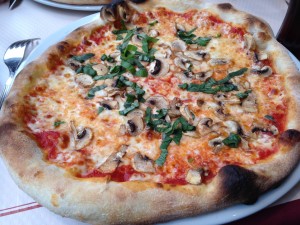 So is Pizzeria d’Ampere worth it? I guess it depends who you are and what you’re looking for. If you’re visiting from, say, New York…it’s not worth your time. There is much better pizza in New York. But things are different in Paris. And although I haven’t had much pizza there, I could certainly see this being in a discussion about the best spots in the city. But because not much is nearby this pizza place (although it is very easily accessible via the efficient Metro system in Paris — it’s right near the Wagram station!) it is unlikely the average Parisian would find themselves passing by. Which leads me to the conclusion that Pizzeria d’Ampere is a solid neighborhood pizzeria. And every neighborhood really needs one of those.

Previous: The Best Bar Style Pizzas In NYC Are Coming From A Pop Up Pizza Shop That Technically Doesn’t Even Exist Yet
Next: Pizza & Cocktails At Grazie In Paris