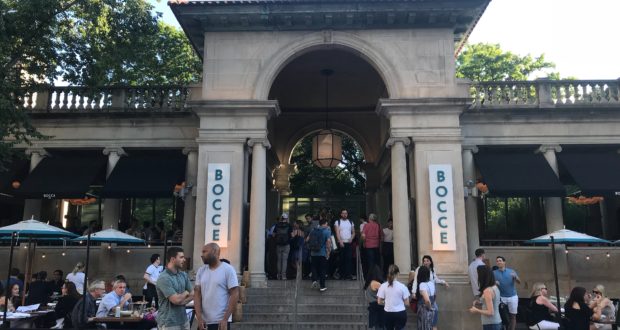 If you wanted to concoct a recipe for the perfect summer evening in New York City it might include pizza + drinks + bocce — all offered up in an iconic open-air metropolitan setting. Well let me introduce you to the aptly named Bocce USQ (20 Union Square West) which recently took over a seasonal …

Summary : Six tasty pies are featured on the menu at this seasonal restaurant located in Union Square's open-air pavilion.

If you wanted to concoct a recipe for the perfect summer evening in New York City it might include pizza + drinks + bocce — all offered up in an iconic open-air metropolitan setting. Well let me introduce you to the aptly named Bocce USQ (20 Union Square West) which recently took over a seasonal lease on the Union Square Pavilion, a structure that was built nearly a century ago but has seldomly been open to the public in recent years (NYC Parks Department offices are located below ground, as is the restaurant’s kitchen). The space was home to hotspot Luna Park until 2007. And remained unoccupied until a temporary restaurant (The Pavilion), opened for the season last summer. 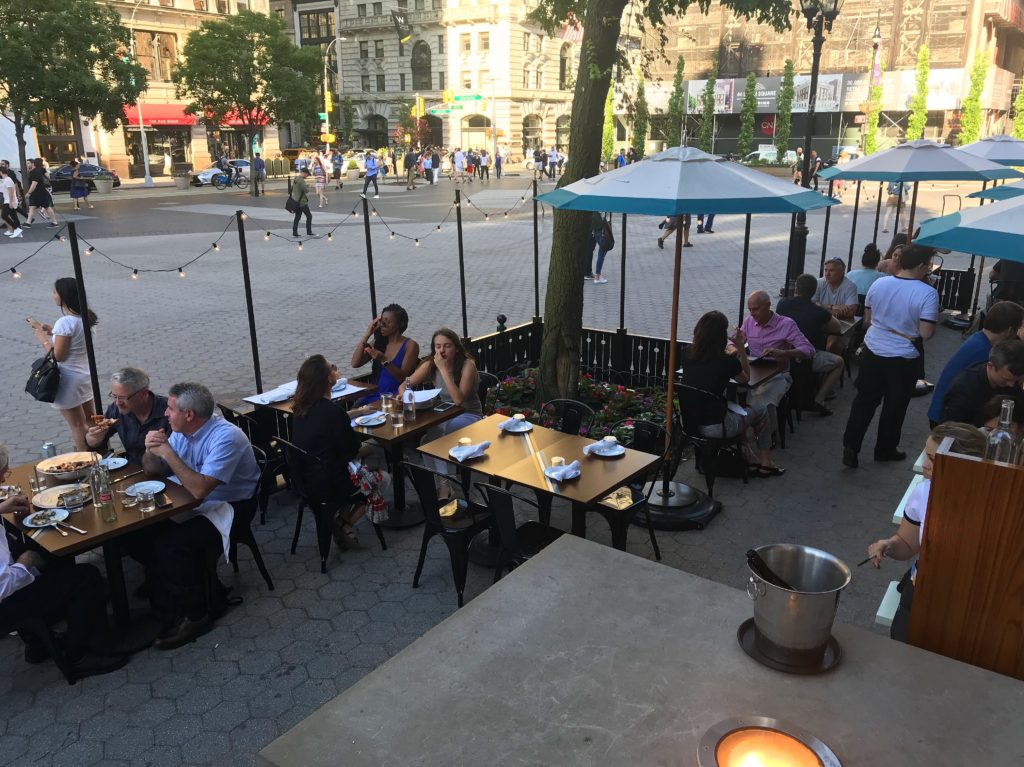 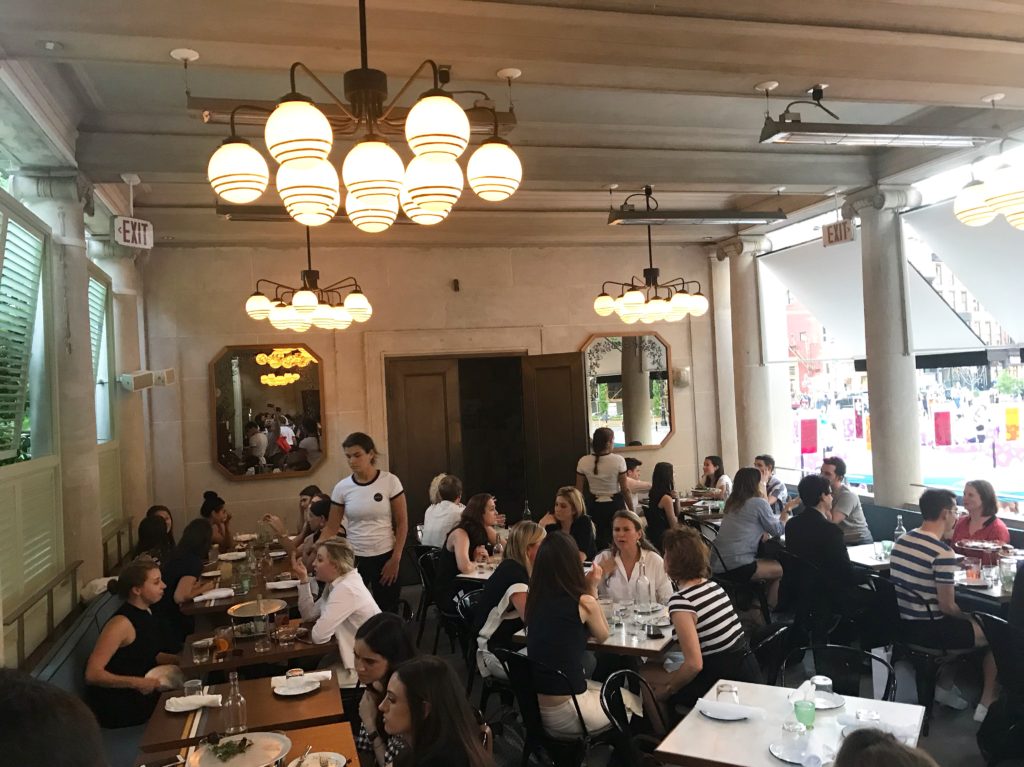 I’ve walked by the Pavilion some 10,000 times over the past 15 years (I lived around the corner from Union Square until recently, so likely passed by 4-5 times per day on average). But I never imagined that the structure could be transformed into such a majestic setting inside. The restaurant was packed on a recent Thursday evening. Which you should expect as long as the weather is nice (there is “covered” seating inside the Pavilion, but it wouldn’t be pleasant to dine there once the temperature dips). Additional seating (and a bocce court) area located out front of the Pavilion.

My friend and I were quoted a wait time of about 90 minutes when we arrived around 6:30PM. And when we checked back 90 minutes later, we were seated right away. The place itself is casual. But as the night wore on, the clientele transformed from an “after work” crowd to couples on dates and larger groups dressed for a night on the town. The best (or worst, depending on whether your enjoy being the center of attention) table in the restaurant seats 10 people and is located right in the center of the Pavilion. 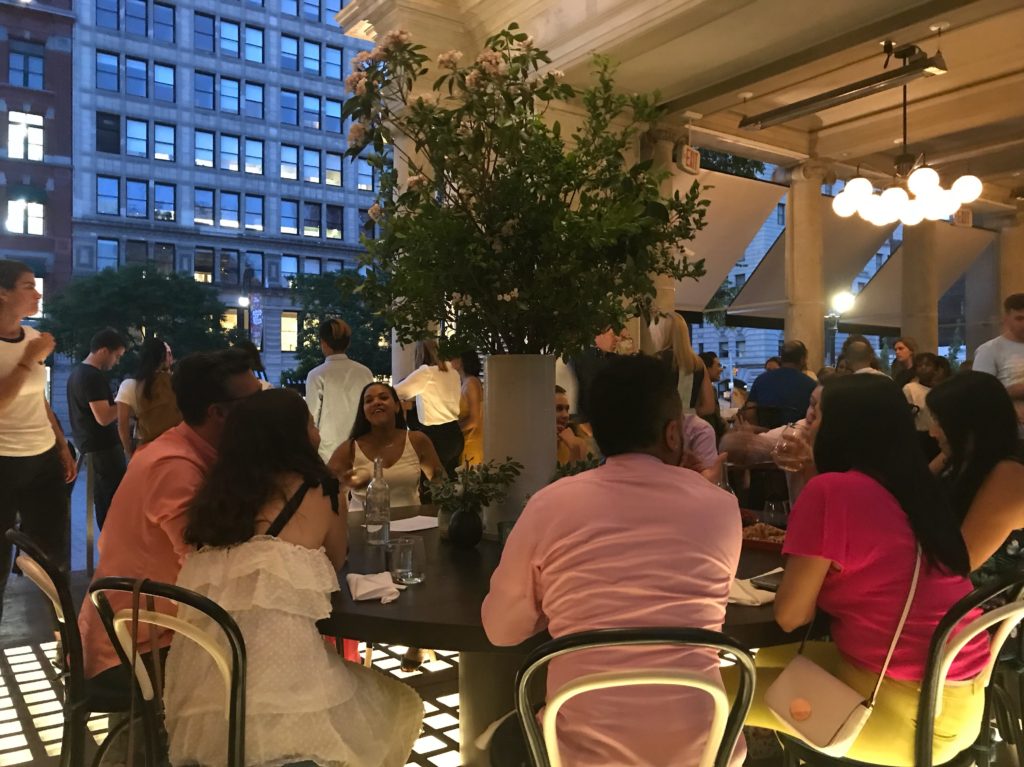 First order of business: drinks. There is a full drink menu, including seven spritzes. They all sounded incredibly refreshing, but I opted for the lemon one. It was great.

My next move was to decide on food. Although their salads sounded light and refreshing, online intel had directed me to the $12 “Bocce Bread” with a side of whipped ricotta and olive oil. It was fantastic. Chewy, puffy, slightly warm dough — an Italian play on pita bread — served alongside a dollop of delicious cheese. An essential start to any meal here. 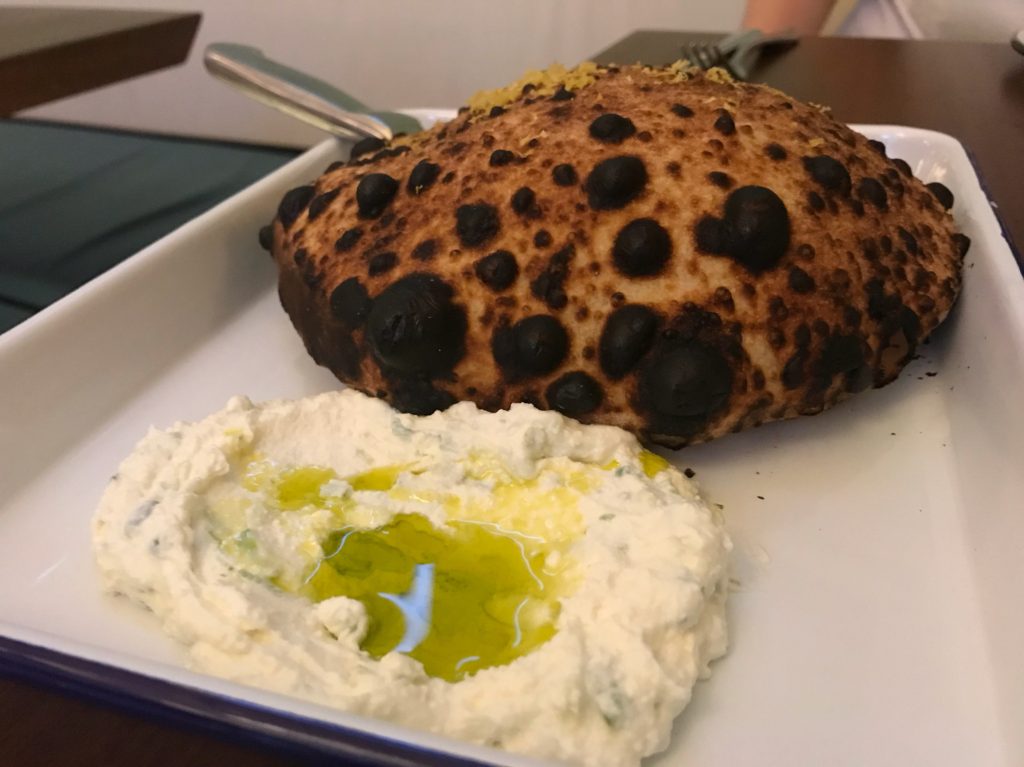 There are a number of other “share” plates on the menu, including a couple of pastas. But my focus was on the pizza. There are six pies offered — three vegetarian, two with meat, and one with shrimp. They are reasonably priced at $16-$20. I opted for “The Farm” (Fresh Mozzarella, Chilis, Green Garlic, Market Greens, Fresh Herbs) and “Sausage” (Tomato, Roasted Peppers, House Pork Sausage, Mozzarella, Pecorino). They were both delicious, but I was most impressed by the Farm pie. The non-descript market greens were cooked to perfection and the pie was light (in that you likely won’t feel like curling up into a ball on your couch immediately following consumption). 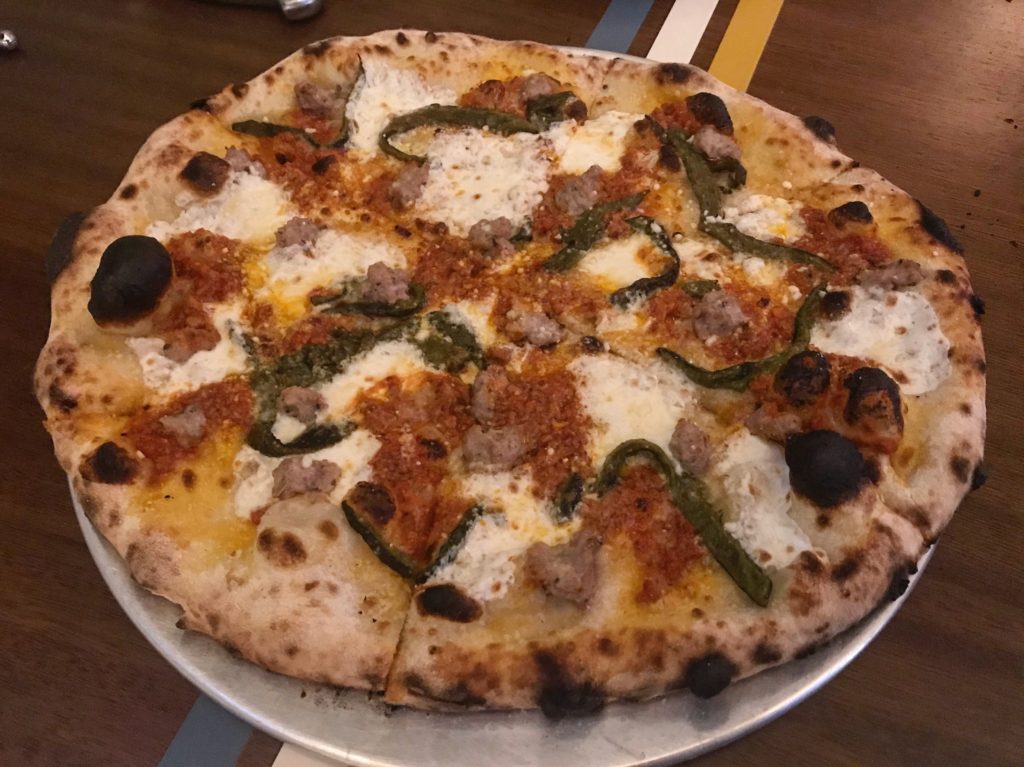 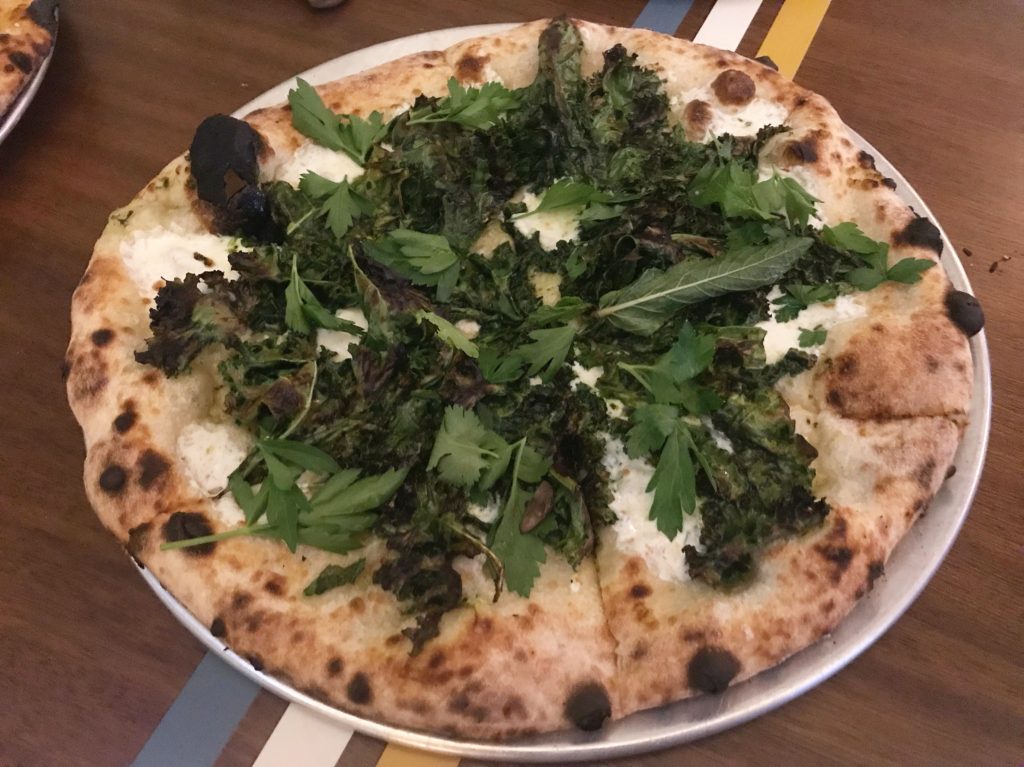 Bocce doesn’t fully lean into the whole bocce theme. Although there is a makeshift course outside, it’s sized for the city (i.e tiny). But it wasn’t in use as I was leaving the restaurant. So my friend and I decided to play — the perfect ending to a lovely summer evening in New York.

Bocce’s future beyond this summer is unknown. So swing by for a pie or two before it’s too late. 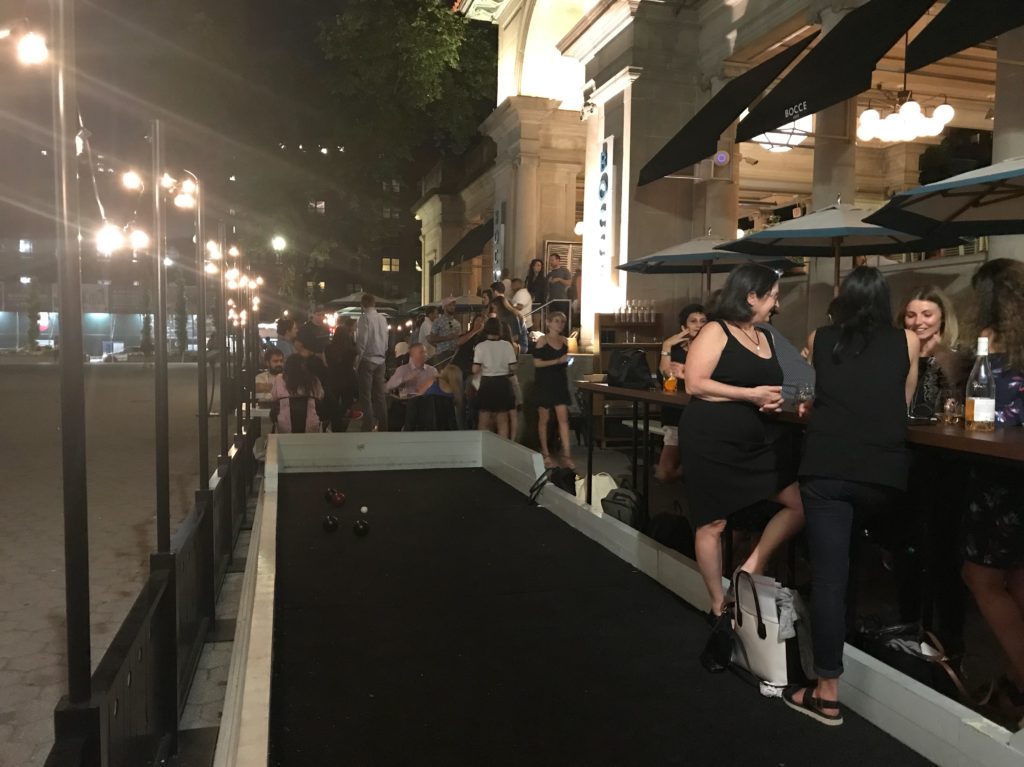 2018-07-09
I Dream Of Pizza
Previous: Di Fara Quietly Opens Its First Outpost After 50+ Years
Next: Beebe’s @ The Boro Hotel: Hip Pizza In Queens