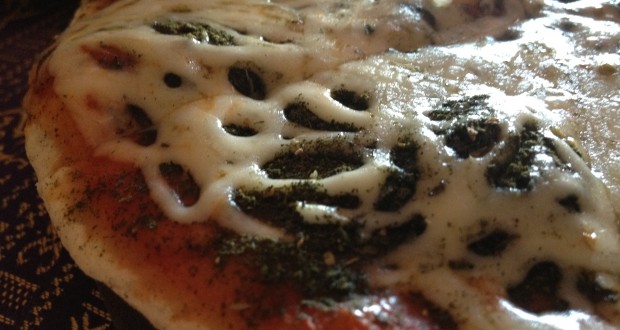 Happy Special Pizza In Siem Reap, Cambodia Lives Up To Its Billing

Posted by: I Dream Of Pizza in Cambodia, International, Reviews April 29, 2013

Happy Special Pizza In Siem Reap, Cambodia Lives Up To Its Billing

Earlier this year, I spent three weeks in Southeast Asia visiting Thailand, Vietnam, and Cambodia. I was pleasantly surprised by the pizza I ate in Thailand and Vietnam and was unsure how the pizza in Cambodia would stack up. I’d done no research about pizza in Cambodia prior to the trip and would only be …

Summary : The pizza leaves much to be desired, but nobody is at Happy Special Pizza for the quality of the pies.

Earlier this year, I spent three weeks in Southeast Asia visiting Thailand, Vietnam, and Cambodia. I was pleasantly surprised by the pizza I ate in Thailand and Vietnam and was unsure how the pizza in Cambodia would stack up. I’d done no research about pizza in Cambodia prior to the trip and would only be spending five nights there — two in Phnom Penh and three in Siem Reap. When I arrived in Cambodia I did a quick Google search about pizza there and nearly all of the top links were for “happy” pizza places. If you ask me, all pizza is happy. But here happy refers to something else: marijuana pizza.

Cambodia is know for its happy pizza places, all which serve pizzas containing just an extra bit of seasoning for you to enjoy your pizza on another level. In turns out that in Siem Reap — which is located just a few miles from the temple of Angkor Wat — there is a whole block with nothing but happy pizza places. The street just so happens to be named Hospital Street (also called 2 Thnou Street). 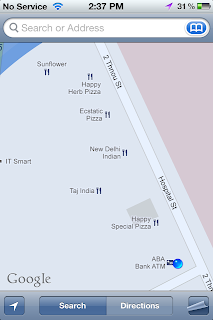 Starting from the intersection of Street 7 and Hospital Street, walk north and on your left side you’ll first see Happy Special Pizza. Next up you’ll arrive at Happy Angkor Pizza (not noted on the map). This is followed by both Ecstatic Pizza and Happy Herb Pizza. It is truly one of the happiest blocks in town. 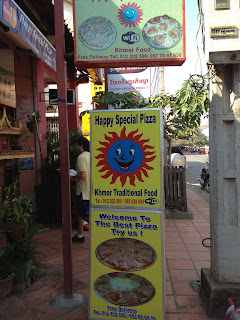 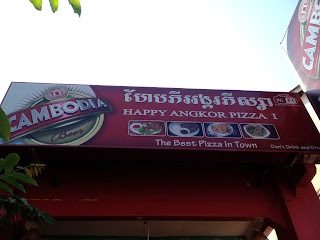 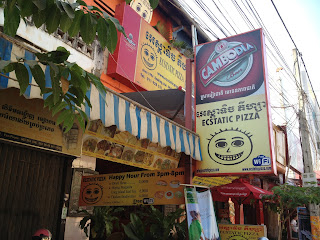 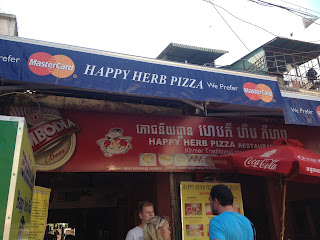 According to online reviews, the Cambodia government has lightly cracked down on some of these places in recent years. As a result, not all of the pizzerias are necessarily as happy as they used to be. But Happy Special Pizza appeared to be the most happy based on reviews, so off we went. When you enter, it looks as if it’s a normal restaurant. There is no mention of marijuana anywhere. Just happiness. All of the pizzas on the menu are listed “without happiness” and you must request your pizza “happy style” for a more authentic experience. Oddly, the prices for the pizza are the same whether or not you order it happy. I wonder if that’s because nearly everyone orders their pies happy and that is simply worked into the cost already. 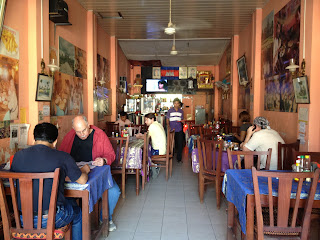 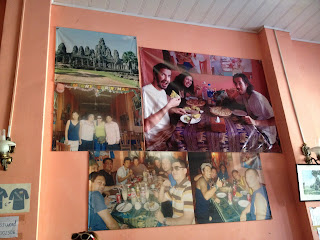 From an aesthetic standpoint, you cannot differentiate between a “happy” pizza and a non-happy pizza. At Happy Special Pizza they come in three sizes — small, medium, and large — which are drawn in the photo below. 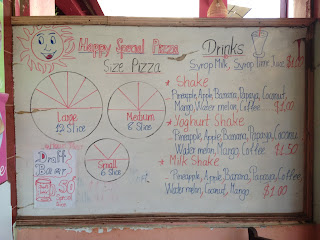 The quantity of pizza ordered varied a lot amongst the group members I was with — some ordered a large pie for themselves, while others split a medium two-ways. It is unclear whether a larger pie equates to more happiness — or you’re simply getting more food. The pies ordered included a margherita pie, a beef pie (cheese, tomato, onions, beef, and green pepper), a pollo verde pie (cheese, tomatoes, spinach, garlic, chicken), and a Hawaii pizza (cheese, tomato, ham, mushroom, pineapple). None of them looked particularly appetizing, but rumor was that the pollo verde and margherita were the best. In total there are 48 pies on the menu.

Here is what some of my dining companions had to say about their experience there:

Review 1: Don’t expect Neapolitan pizza at this place. However, the pizza is edible and the atmosphere is very laid back. I suggest you order pies with strong flavors like garlic, pepperoni, etc because they mask the bitter flavor of the happy herbs. Service is slow but servers are nice and agreeable. Having said this, I have never been so happy after eating pizza, if you know what mean 🙂

Review 2: Happy Pizza was great! It was my favorite meal in Cambodia and not necessarily because of the quality of the pizza. The atmosphere was laid back and the decor and interesting pictures of happy people on the walls were appropriate for the restaurant.  Would have enjoyed very much the option of having my pie made “extra happy” and so i suggested the staff to include it in the menu in the future. Def will go back.

Review 3: At first bite, it doesn’t seem like much. Typical average pizza, nothing to write home about it. However as time goes on you start to realize just how good it was. The reaction might be a bit delayed, but it definitely makes you feel very, very happy.
Pollo Verde 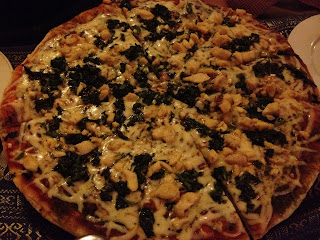 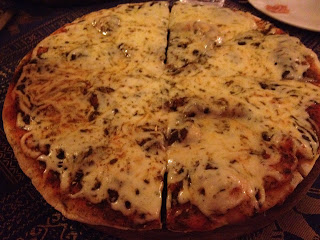 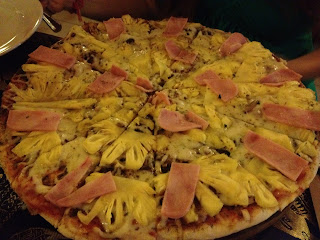 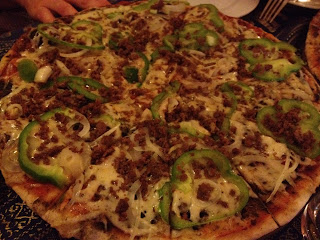 Previous: I Like Pizza
Next: First Look: MD Kitchen — A Di Fara Spinoff