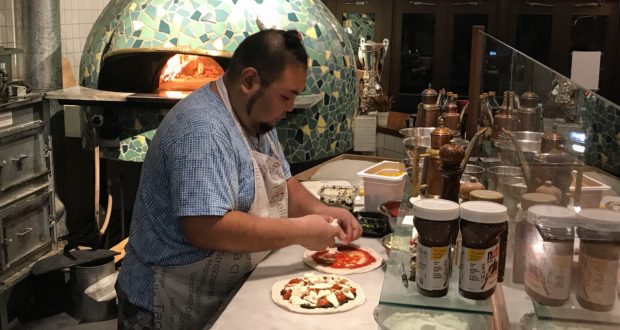 Posted by: I Dream Of Pizza in International, Japan, Reviews May 9, 2019

Kyoto, Japan — which was once the country’s capital city — is well known for its classical Buddhist temples, imperial palaces, and Shinto shrines. It’s a city filled with a rich history and strong culture. And also some pretty tasty pizza. This past summer, I took my second trip to Japan. Back in 2012, I reviewed …

Summary : Authentic pizza in Japan's cultural capital... at a pizzeria that wouldn't be out of place in Italy.

Kyoto, Japan — which was once the country’s capital city — is well known for its classical Buddhist temples, imperial palaces, and Shinto shrines. It’s a city filled with a rich history and strong culture. And also some pretty tasty pizza.

This past summer, I took my second trip to Japan. Back in 2012, I reviewed a few Tokyo pizzerias on this site. At the time, I was really impressed with the quality of the ingredients and the craftsmanship than went into a food item that you might not typically expect to be anything special in Japan. Sushi? Sure. Beef? Of course. Yakitori? You bet. But pizza? That was shocking to me. On my return visit, I knew what to expect in terms of the pizza I might expect to find. And while the majority of my meals were spent consuming more traditional food, I did make a notable stop at Pizza Mercato (下京区朱雀正会町1-1KYOCA会館105) in Kyoto (if the name rings a bell, you might be thinking of a slice shop on the NYU campus). 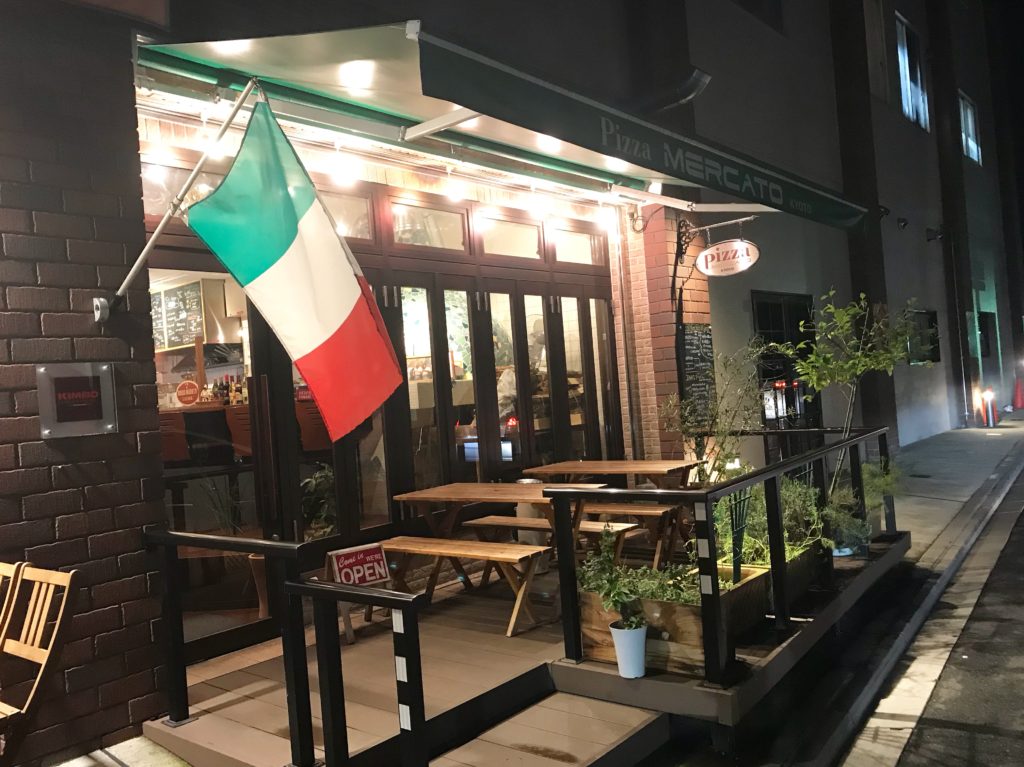 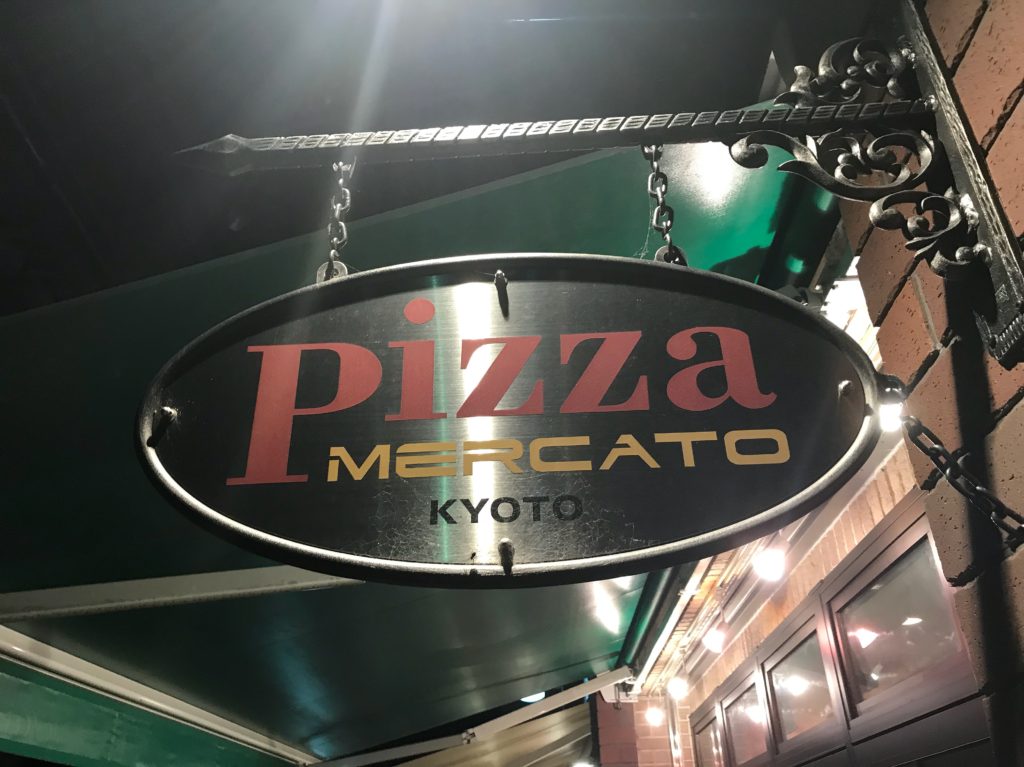 The pizzeria is located about a 15 minute bus ride west of the main train station. It’s a bit off the beaten path in terms of where most tourists typically spend their time. But it’s very easy to get to (the bus drops you off right in front of the restaurant) and provides some incentive to explore an area you wouldn’t otherwise visit. I first heard about the pizzeria in the comments section on a friend’s Facebook post a few years ago (he was looking for food recommendations in Japan) and have been following the pizzeria on Instagram since then. So I’d been eyeing their pies for sometime.

From the outside, Pizzeria Mercato looks like any other pizza spot. An Italian flag hangs beside the door and a “Come In. We’re Open” sign stands next to outdoor picnic tables. Was this Naples? Or Kyoto? 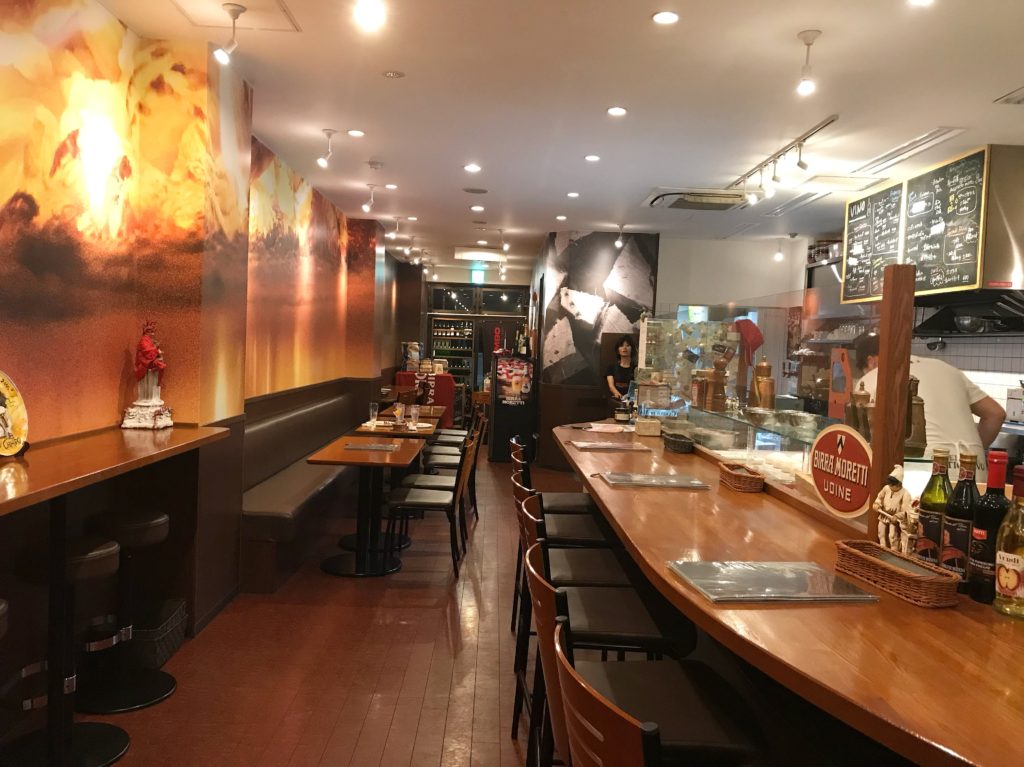 The restaurant itself seats about 40 guests — split pretty evenly between tables and bar seating. There were about 10 other guests there when we arrived around 7PM on a Sunday evening (the restaurant is closed on Wednesdays, which is relatively common in Japan). The family on one side of us happened to be from Houston, Texas. And the gentleman on the other side of us was from Egypt.

The menu features about 35 pies (quite the selection). And while you might expect some crazy topping combinations, most of the offerings are pretty traditional. One pie has tuna. Another has corn. And there’s also one with french fries (which isn’t that uncommon in Naples). But that’s about as exotic as it gets at Pizza Mercato. Nine of the pies are vegetarian (plus 3 more dessert pies) and the rest contain meat or fish. By far, the most popular topping is ham, which can be found on 13 pies. Of note, there is also a montanara pie on the menu (where the dough is fried before it is baked). My wife and I ordered a margherita and a pesto pie (mozzarella, basil pesto, and tomato). 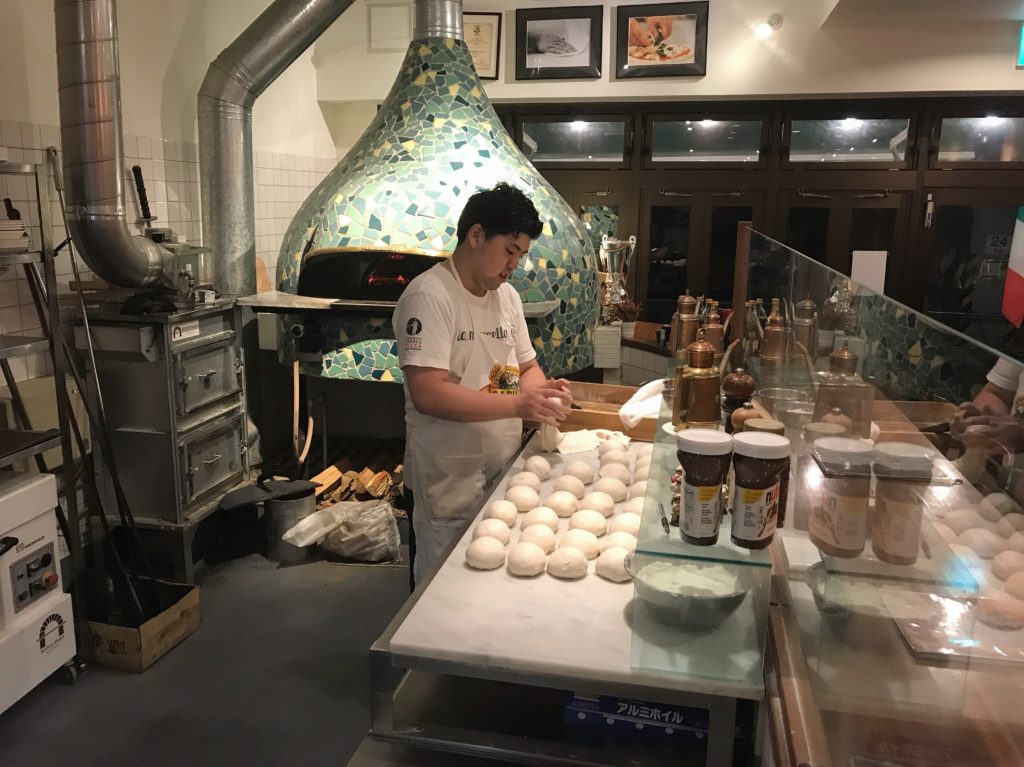 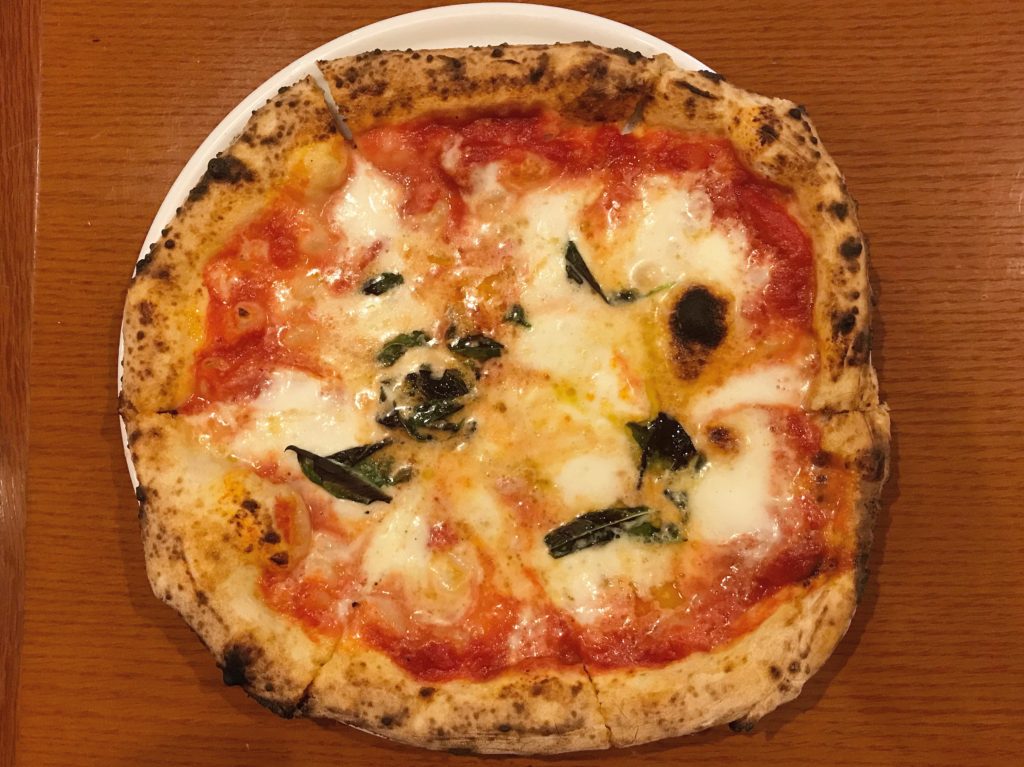 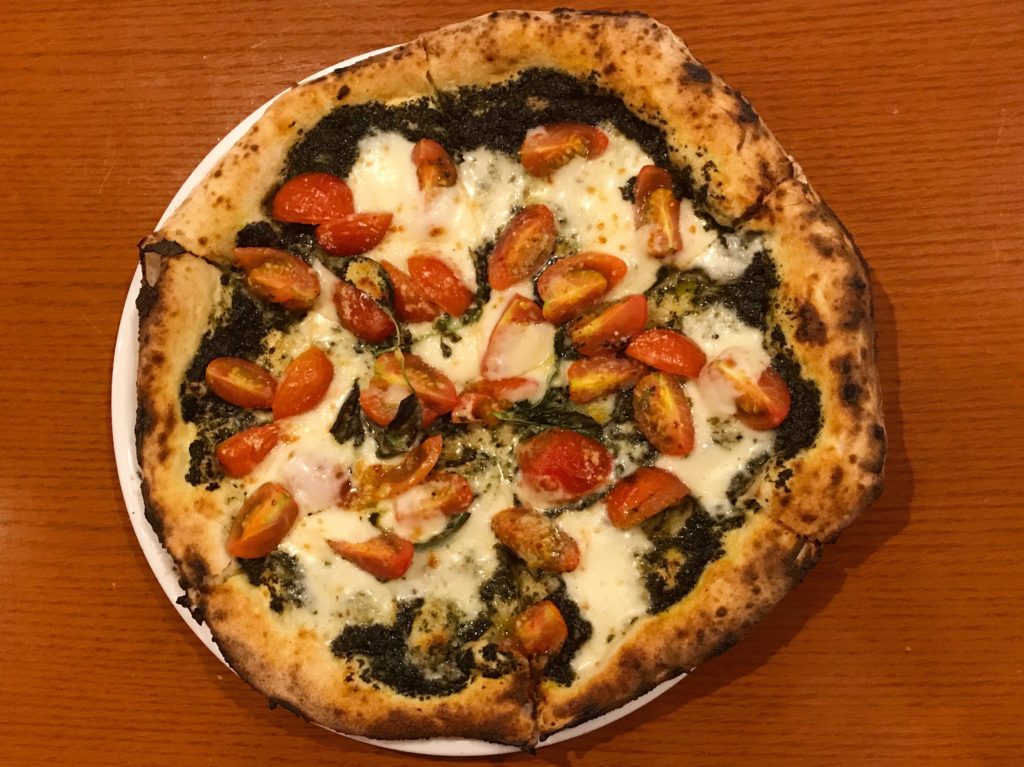 Both pies were tasty. But I think part of the allure was that we were in Japan, eating Neapolitan pizza that was as good as you can find in Naples (or New York, for that matter). These days you can essentially get any type of cuisine, anywhere on the planet. There is good Japanese food in Italy. And it’s no surprise that there is also good Italian food in Japan. What I’ve yet to find in Japan, is a pizzeria that successfully fuses elements of Japanese food and culture with traditional Italian ingredients and processes.

What’s the pizza version of a ramen burger? Is it a pie with tempura? A yakitori pie that’s a spin on BBQ chicken pizza? Maybe nobody is doing that because it sounds outlandish. But I have faith that sometime soon, we’ll be seeing Instagram photos of a chef that’s managed to put a unique spin on a version of Italian-Japanese (Japalian?) food. In the meantime, these traditional Neapolitan pies will have to suffice. 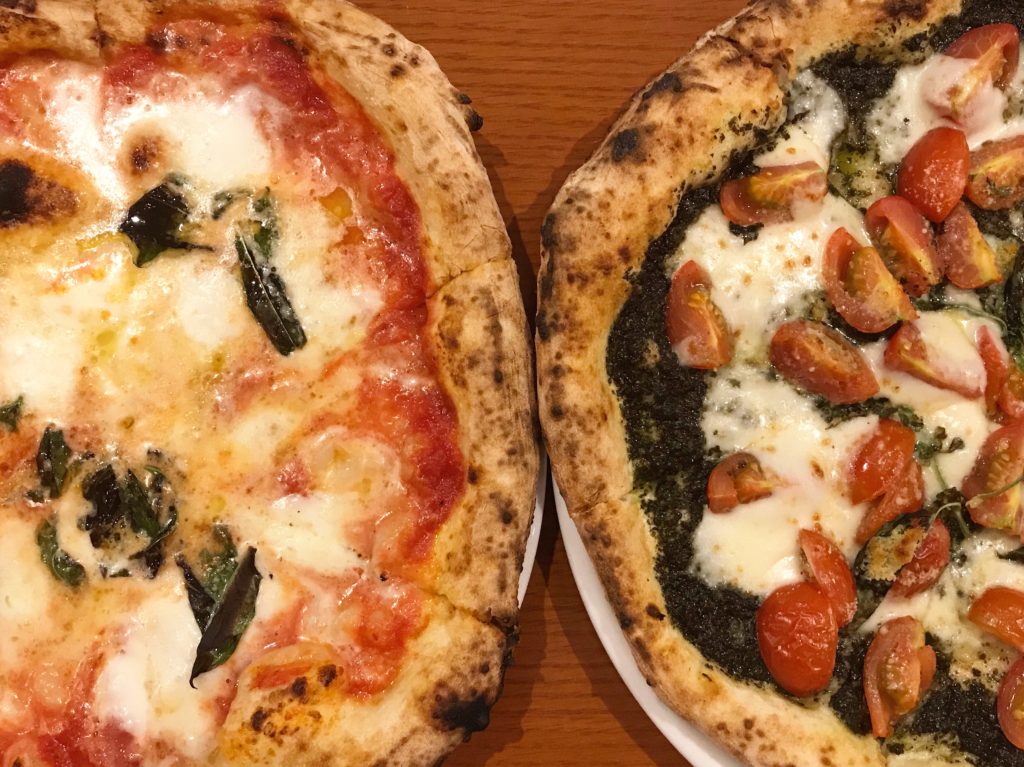 2019-05-09
I Dream Of Pizza
Previous: Yankees CC Sabathia Tries Good NYC Pizza For The 1st Time
Next: In Chicago, Deep Dish By The Slice At Art Of Pizza