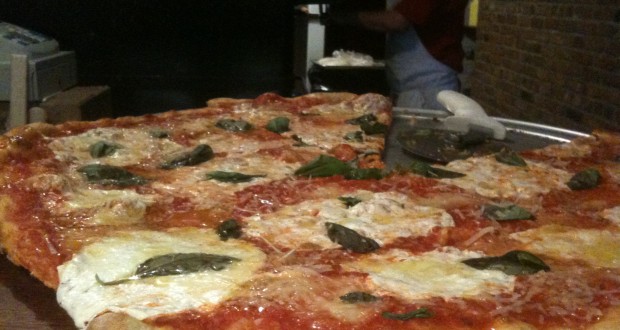 PLEASE NOTE THAT THIS LOCATION IS PERMANENTLY CLOSED, HOWEVER THERE IS STILL AN OUTPOST IN OPERATION IN BROOKLYN AS OF NOVEMBER 2016. What defines a trend? So goes the saying: one’s company, two’s a crowd and three’s a party. And if that’s the case, then there is certainly a Brooklyn pizza party taking place on …

Summary : This nondescript East Village storefront serves some of New York's best --and most expensive -- slices.

PLEASE NOTE THAT THIS LOCATION IS PERMANENTLY CLOSED, HOWEVER THERE IS STILL AN OUTPOST IN OPERATION IN BROOKLYN AS OF NOVEMBER 2016.

What defines a trend? So goes the saying: one’s company, two’s a crowd and three’s a party. And if that’s the case, then there is certainly a Brooklyn pizza party taking place on the island of Manhattan.

I’m not sure if this trend surprises me. Brooklyn is an easier and less risky place to start any type of business. If successful (and once a profitable business model is in place) many of these places should theoretically have the finances to expand. Although one option is to open another Brooklyn location (like Fornino just did), the most logical next step is to set up shop in Manhattan. Which is why in the last few months we’ve seen three notable Brooklyn pizza places open up in Manhattan. I would not be surprised if more are on the way.

Before I share my thoughts on South Brooklyn Pizza’s new location, it should be noted that I’ve never been to their pizza place in Brooklyn so I have nothing to compare it to. It’s been on my list of places to try, but now that I don’t have to trek out to Brooklyn for it, chances are it might be longer than anticipated before I make it out there.

Their new spot is a no frills, hole in the wall space on 1st Avenue in the heart of the East Village. For now, you wouldn’t even know you were passing by a pizza place unless you knew what you were looking for. I’m sure signage will soon follow. After all, this isn’t Lit Lounge. 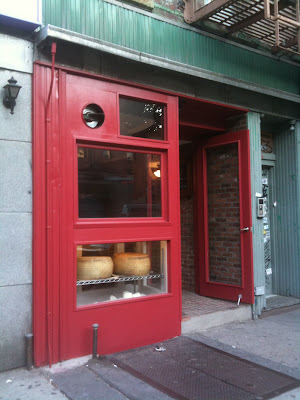 The space itself is not much bigger than that of Artichoke Basille’s up on 14th Street. When the spot first opened there were no seats, but since then, they’ve been able to squeeze in a small table with two chairs. So essentially, this is a take out spot. 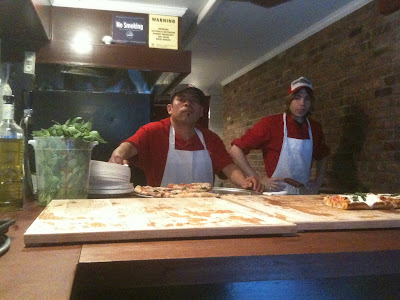 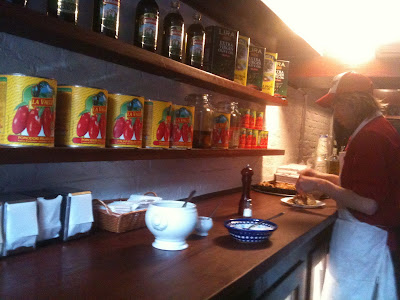 The pizza I had was delicious, albeit just a tad overpriced. Right now they’re serving only margherita slices and sicilian slices. Each cost $4.00. Considering that there’s nothing cheaper to order, in a sense this outpost of South Brooklyn Pizza has become Manhattan’s most expensive slice joint. I’ve seen expensive slices at other places, but usually it’s possible to order a cheese slice for just a couple of bucks. Other places, like Artichoke, where slices start at $3.50, aren’t far behind. But the $4.00 slice is officially in full effect in the East Village.I preferred the regular slice over the sicilian. Two slices were quite filling, so you shouldn’t need more than that unless you’re really looking to stuff yourself. All of the ingredients are fresh, despite the fact that the slices are reheated before being served. They’re also oily — which I love — although my dining partner on this particular evening had to remove some of the oil using the napkin blotting technique. 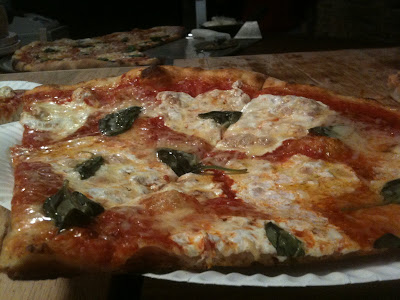 The most interesting thing about the sicilian slice was that it was served with onions on it. I’d never had a sicilian slice with onions. I think that if they were more caramelized it could have worked, but there was something a bit off with the flavor. That’s not to say it wasn’t great — after all, onions are one of my favorite toppings. It was just a little bit surprising when my first bite revealed a hidden treasure inside. 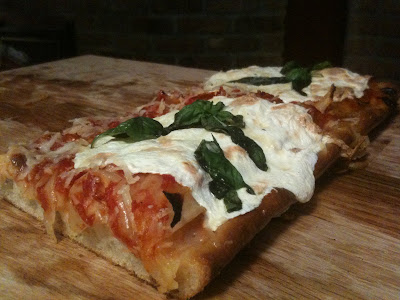 One of the cooler things about the South Brooklyn Pizza outpost — and perhaps a way of justifying the price you’re paying — is their condiment section. Specifically, their roasted garlic. Made fresh throughout the day, you have the option of putting roasted garlic on your slices. Put too much on and it’ll taste like your slice is topped with garlic bread. But then again, doesn’t that sound kind of awesome? Regardless, as long as you’re not planning on any late night make out sessions, you’d be at fault for not at least trying out a bit of this roasted garlic magic on your slice. 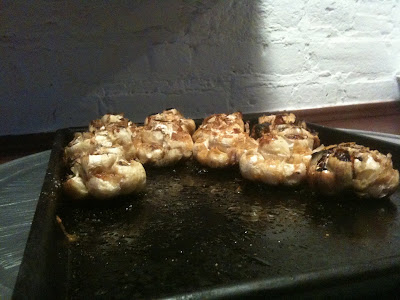 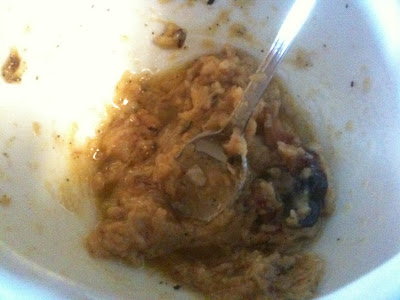 At the end of the day, this South Brooklyn Pizza outpost is one of the better slice joints in the area. But it caters to people who are looking for a more expensive, upscale slice. At least they don’t skimp though. For $4.00 you’re getting a generously sized slice with fresh toppings that will leave you satisfied. Even better would be dropping the price $0.50 cents. NYU students in the area will certainly go to one of the many other pizza places around, but for someone like me — I’m happy to shell out some extra quarters for some quality pizza.
Reviews South Brooklyn Pizza 2010-05-28
I Dream Of Pizza