Posted by: I Dream Of Pizza in Maryland, Reviews, Uncategorized, USA (Non-NY) December 21, 2009

I grew up in Potomac, Maryland — a fairly large suburb of Washington, DC. But a suburb with limited options for pizza. Typically, if we were going out to eat it’d be at Jerry’s Subs & Pizza. And if we were ordering in, then Domino’s and Pizza Hut were on speed dial. I know…

There were exceptions though. Ledo Pizza is a fairly well know local chain which serves square pies because, well, they don’t cut corners (corny slogan). A quick look at their website indicates that they now have nearly 100 locations as far away as Florida. Armand’s is another chain with a modest 10 locations in the DC Metro area.

It wasn’t until about a decade ago that my pizza world was turned upside down. It was then — in the late 90s — that I discovered Giuseppi’s Pizza in Rockville, Maryland. And even now that I’m a pizza snob (for lack of a better term), I still consider their pies top notch.

I have no idea how long it has been around, but I do know that their original location was torn down a little over five years ago as part of a massive redevelopment project — the creation of a new Rockville Town Square which now features luxury condominiums and upscale restaurants. The original Giuseppi’s was located alongside a Margruder’s supermarket and CVS in the old Town Square — a rundown grungy strip mall. The place fit in at the time. I remember walking in and seeing stacks of hundreds of pizza boxes by the door. After ordering at the counter you’d make your way to the back of the restaurant which was scattered with mismatched tables and a few old school video arcade games. 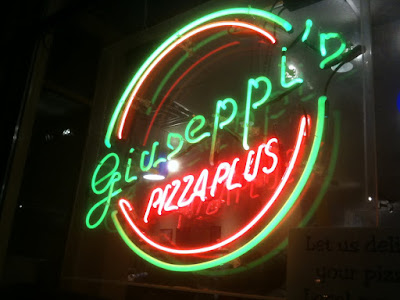 When the strip mall was torn down, the future of many of the stores and eating establishments was in jeopardy. Luckily, Giuseppi’s found a new location a few blocks away in a vacant storefront on a block that had already been redeveloped. Today, it sits next to a Regal Cinema and California Tortilla — in the middle of a pedestrian heavy center of town. In other words, things couldn’t be better for Giuseppi’s. 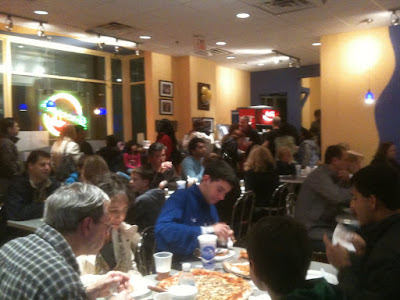 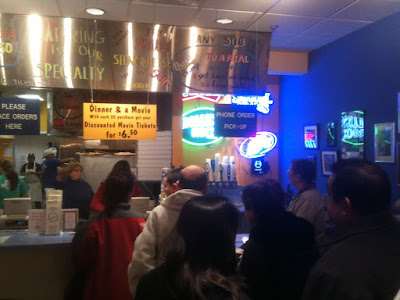 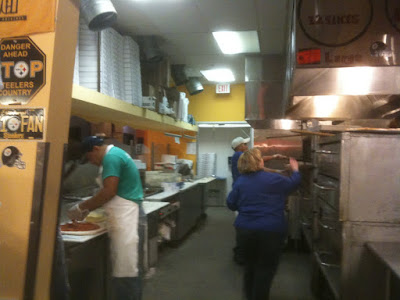 The place is packed every time I’m there. They’re popping out pizzas by the minute. And their pies have never tasted so good. I’m not necessarily sure that if I took someone from New York down to try it that they’d be blown away. But I’d like to think I suffer from something that will henceforth be known as hometown bias. Giuseppi’s is the little place that could. It’s family run business and the owners are always there behind the counter. I grew up with Giuseppi’s and it was the pizza place of my youth. It’s no Motorino or Di Fara but it taught me that not all pizza is created equal.

On a recent trip there we ordered a large cheese pie — half with mushrooms — a family favorite. One thing about Giuseppi’s that I will always love is it’s distinct taste. I’m not necessarily sure that in a blind taste test I could distinguish a Motorino pie from a Co pie. But Giuseppi’s has a very unique taste. It’s cheesy. It’s oily. And every bite makes you want to suck every last juicy bit out of it. 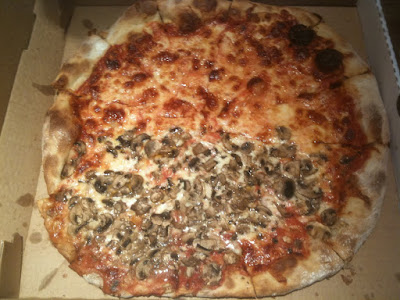 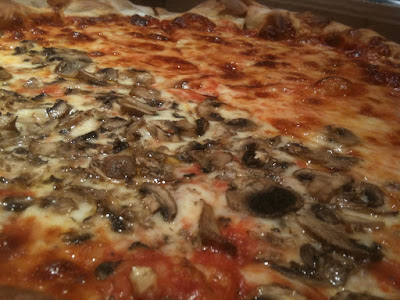 The place is cheap by New York standards. A large cheese pie will run you $13.90. It’s 16 inches, but what I like is that they cut it into 12 slices. For the less adventurous, there is a 12 inch, 8 slice pie that costs $9.75. The most expensive pie on their menu is the Giuseppi’s Special — pepperoni, mushrooms, sausage, onions, green peppers, and olives. The price: $22.85. There are also great specials. For example, with each $5.00 purchase you can get a movie ticket to Regal next door for only $6.50. That’s $11.50 for pizza and a movie. In New York, a movie alone is more expensive than that. 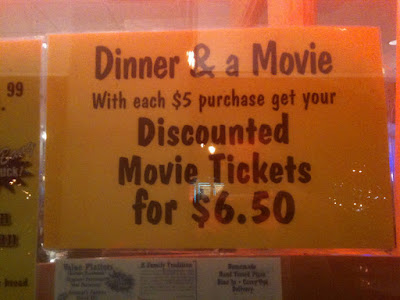 There are two things that I don’t particularly like about the place and neither has to do with the pizza itself. The first: on the front window there is a huge sign that reads Real New York Pizza. Who are they kidding? Their pizza is delicious, but it’s not New York pizza. You can only get that… well… in New York! 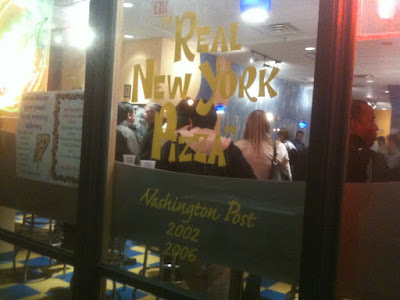 The other thing I dislike about the place is a little shrine right above the register. I’m all for being passionate about football, but Giuseppi’s is located in the heart of Redskins territory. The owners apparently have a different allegiance. Hey — at least it’s not the Cowboys! 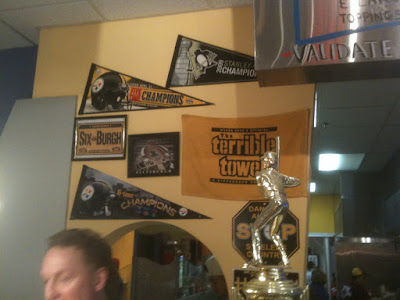