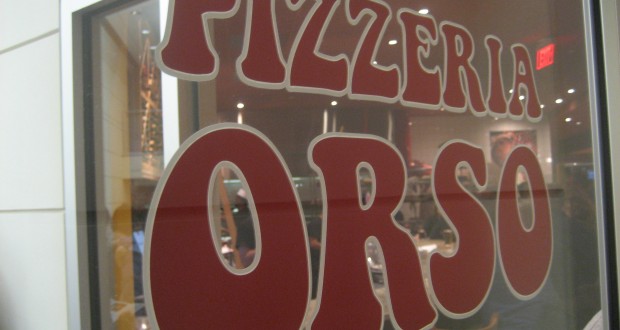 When a beverage is the highlight of your dinner at a pizza place, that typically means either one of two things: (a) their pizza wasn’t that great or (b) they had really amazing drinks! At Pizzeria Orso (400 S. Maple Ave) in Falls Church, Virginia… it was a little of both. So what was this …

Summary : This underwhelming suburban DC pizzeria often gets overlooked. And for good reason. The pies and service aren't great and there are better places in the region.

When a beverage is the highlight of your dinner at a pizza place, that typically means either one of two things: (a) their pizza wasn’t that great or (b) they had really amazing drinks! At Pizzeria Orso (400 S. Maple Ave) in Falls Church, Virginia… it was a little of both.

So what was this magical cocktail in question? The passionfruit sangria ($9.00) which was fruity and sweet — and perhaps the only thing we ordered that arrived in a timely fashion. 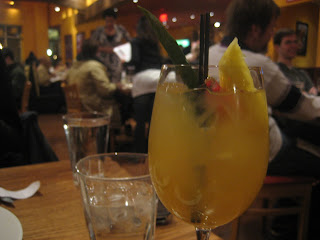 It’s rare that I write about restaurant service on this site. I don’t have high expectations when it comes to service. I’ll gladly wait two hours for a Di Fara pie and many of my favorite pizza places are no frills, let-me-give-you-attitude joints. So what’s the big deal? 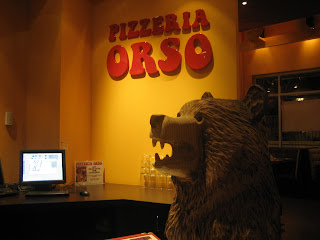 At Pizzeria Orso, I felt that the service was so bad that it became difficult to enjoy the meal. When we arrived at the 117-seat restaurant around 7:30PM on a Saturday evening, we were told it would be about a 35 minute wait for a four top. While that estimate ended up being pretty accurate, we could have actually been seated a lot quicker. Empty tables were often disregarded for more than 5 minutes before they were cleaned by a busboy and one customer complained that he’d had his eye on an empty table for 30 minutes. It’s important that customers don’t feel rushed, but after they’re gone, the table should be cleared immediately and reset for the next party 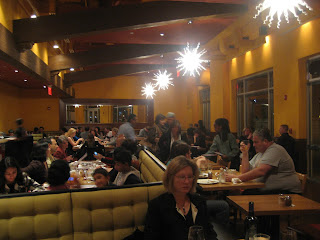 Once we were seated around 8:05PM, it took more than 10 minutes for anyone to notice we were there (our table, by the way, was in the middle of the crowded restaurant). We finally had to ask someone for water and a waitress came over soon after. Our drinks and appetizers arrived promptly (although the waitress forgot about my father’s soda), but it wasn’t until 9:00PM that our pies arrived, nearly an hour after we’d been seated. Mind you the pies take 90 seconds to cook. 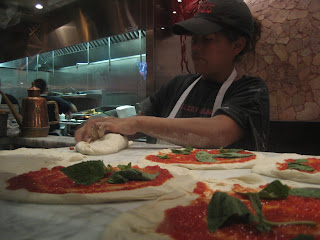 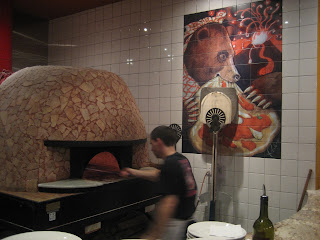 As there were two vegetarians in our party, we ordered one pie (Capricciosa) without ham. This request was disregarded. Because there isn’t a lot of ham in this pie anyway, it wasn’t until you took a bite that it was really possible to notice the small pieces of ham. A ham-less pie was promptly made. In addition, no pies at Pizzeria Orso come sliced unless requested. This seems odd to me. Isn’t pizza meant to be shared? Even personal Neapolitan pies? We requested that the pies be sliced, but when they arrived they were not sliced. Another fail.

Had there only been an issue or two, I feel like it would have been possible to overlook them. But the restaurant didn’t seem to get anything right on this particular night. Although certainly not expected, I would have thought that at least the pie they initially served us with ham would be comped when we received the check. That was not the case.

All of these mishaps aside, the pizza was decent. I wouldn’t put it in the top tier of Neapolitan pizzas I’ve had, but it’s worth noting that I was in Falls Church, Virginia. The suburban town outside of Washington, DC isn’t known as a pizza hub. For locals, it very well might be the best pizza around. The place provides a lively atmosphere. Children could be seen posing with a wood bear (shown above) at the entrance, and there are even arcade games to keep you occupied while you wait. Adults down drinks by the bar (beers on tap included Anderson Valley Winter Solstice and Left Hand Milk Stout, each $6.00 per pint). They even have specials on pies during Redskins games.

But back to the pizza. We ordered three pies: 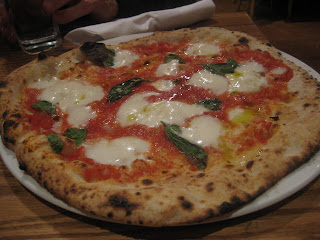 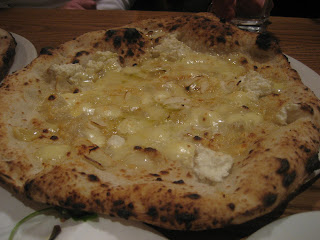 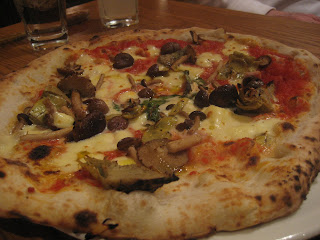 The best pie was the Margherita D.O.C. although the cheese to sauce ratio very much favored the latter. Our white pie was pretty standard and the toppings on the Capriccisoa were uninspiring. I’ve been on an artichoke kick lately, but it would have been nice if they were cut into smaller pieces. Our pie contained a couple of artichoke chunks. It appeared that the ingredients were carelessly thrown onto the pie, resulting in bites that might contain a lot of one topping, like mushrooms, and none of another. 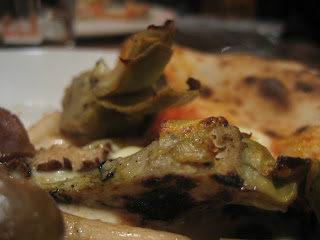 Pie prices range from $12.00 – $18.00. Considering that pies at Manhattan spots like Motorino start at $9.00, I’d say Pizzeria Orso was a little pricey. But if they can fill up their restaurant with prices like that… why not? I’m not sure I’d ever return to Pizzeria Orso with so many other high quality pizza places setting up shop in the DC area. But if you live around the corner, it sure beats Domino’s and Papa John’s.