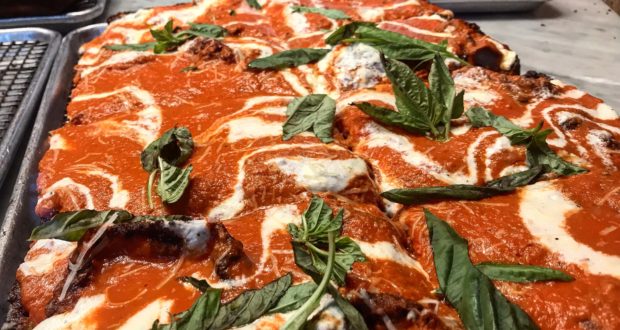 Mama’s Too (2750 Broadway) serves the best pizza in Manhattan (there, I said it). That’s not a statement I make lightly. But it’s a statement I’ve put much thought behind over the past couple of years. And I am now ready to share that sentiment publicly for the very first time. Let’s take a look …

Summary : Superb slices from a hole in the wall shop in Morningside Heights. Their house slice (circle and square) vodka slice (square) and cacio e pepe (square) are standouts.

Mama’s Too (2750 Broadway) serves the best pizza in Manhattan (there, I said it).

That’s not a statement I make lightly. But it’s a statement I’ve put much thought behind over the past couple of years. And I am now ready to share that sentiment publicly for the very first time.

Let’s take a look at a quick timeline of how a pizzeria smaller than the size of a studio apartment — located in a neighborhood with few notable food establishments — won me over:

December 2017: Mama’s Too opens. Few take notice.
March 2018: A slice from Mama’s Too pops up on my Instagram feed. Adam Kuban calls it “fantastic.”
April 2018: I venture there to see what all the hype is about. I am impressed (“seriously good slices,” I wrote on Instagram at the time).

Six months pass by and I didn’t really think much about the pizzeria. But then the New York pizza world was turned upside down when a New York Times article spotlighted Mama’s Too in November 2018. Critic Pete Wells wrote:

It combines some of the most appealing elements of a Neapolitan pie with the most satisfying aspects of the archetypal product sold on paper plates from sidewalk windows. It is as if Frank Tuttolomondo, the owner and pie architect of this informal but very serious pizzeria on the Upper West Side, has learned how to genetically modify pizza.

The rave review led to lines out the door and was followed by subsequent reviews from other prominent publications. The following month, once the hype died down a bit, I decide to pay another visit. And that’s when I began to truly fall in love with Mama’s Too.

Over the course of 2019, I’ve eaten there at least a dozen times — and am still finding new slices that I’m impressed with. 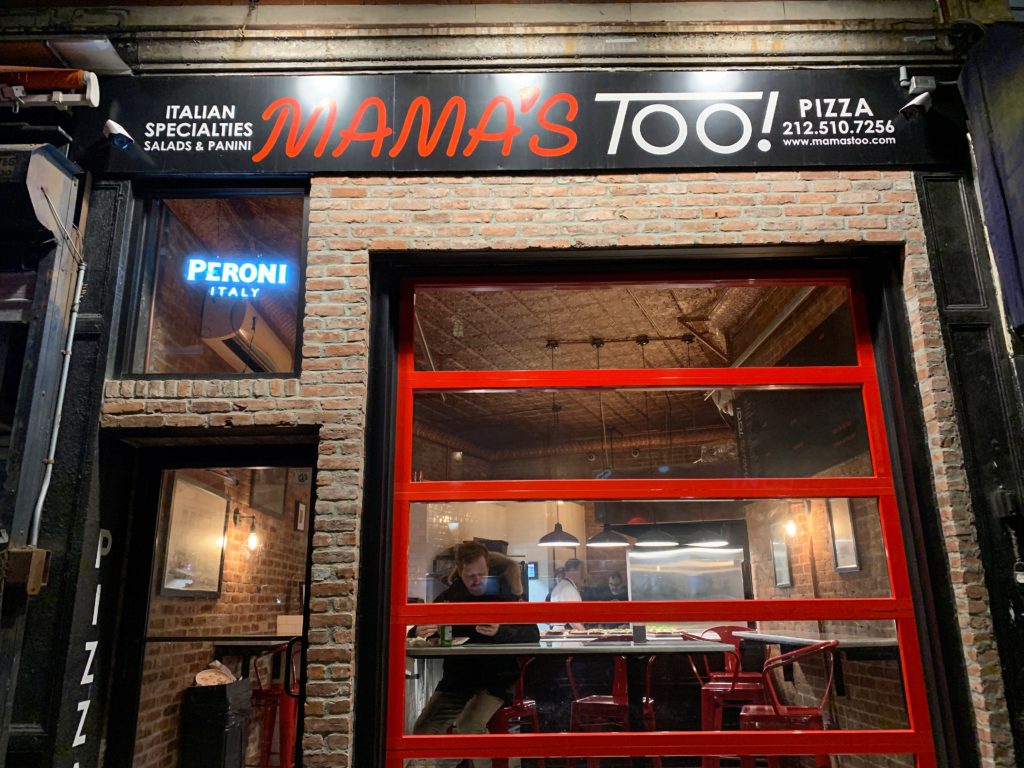 When you enter the storefront on Broadway and 106th Street, there might be anywhere from two to ten pies sitting out on the counter. If there is one “complaint” that I have about Mama’s Too it’s the following: There is no predicting what pies will be available. There have been times where I’ve been in line and there was a full pie of 8 slices sitting out, but by the time I got to the front of the line it was gone. And once a pie is gone, it might be gone for the rest of the night. This can be frustrating for patrons. In addition, Mama’s Too has no signage by their pizza, so it’s not always clear what the available slices are (and how much they even cost). When nearly every person in line gets to the front, they ask the cashier “what’s this?” and “what’s that?” which slows down the line and make it difficult to decide what to order until you’ve been given the full rundown of what’s available. If Mama’s Too was willing to invest in some signage that would make the ordering process a lot more smooth. 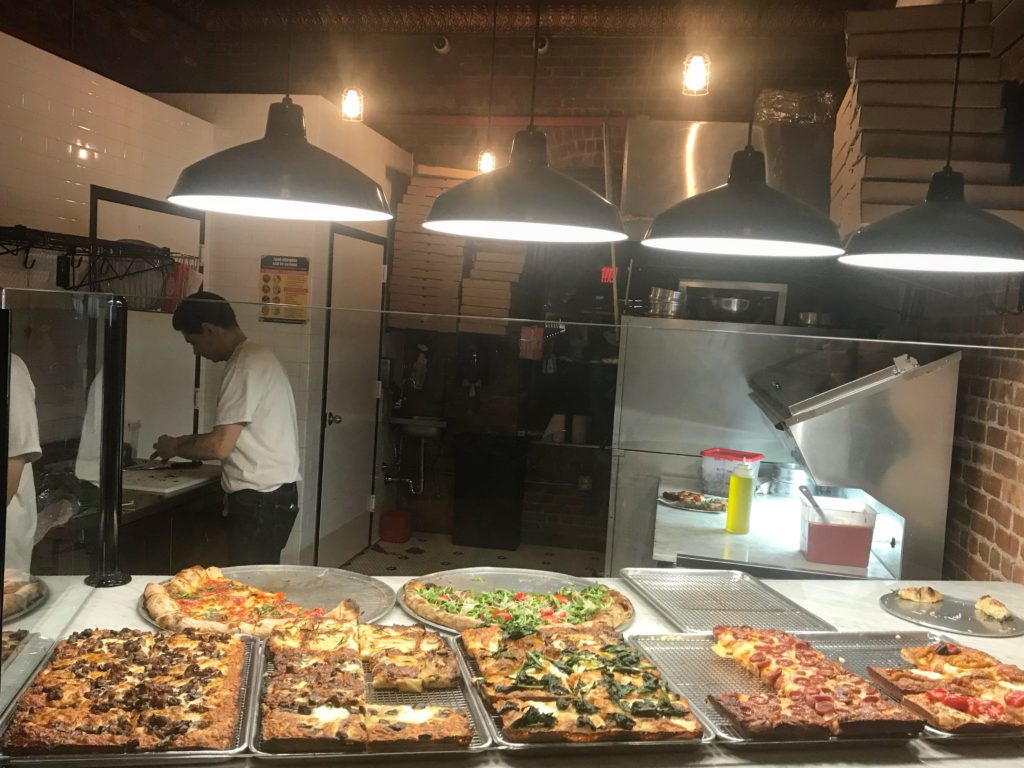 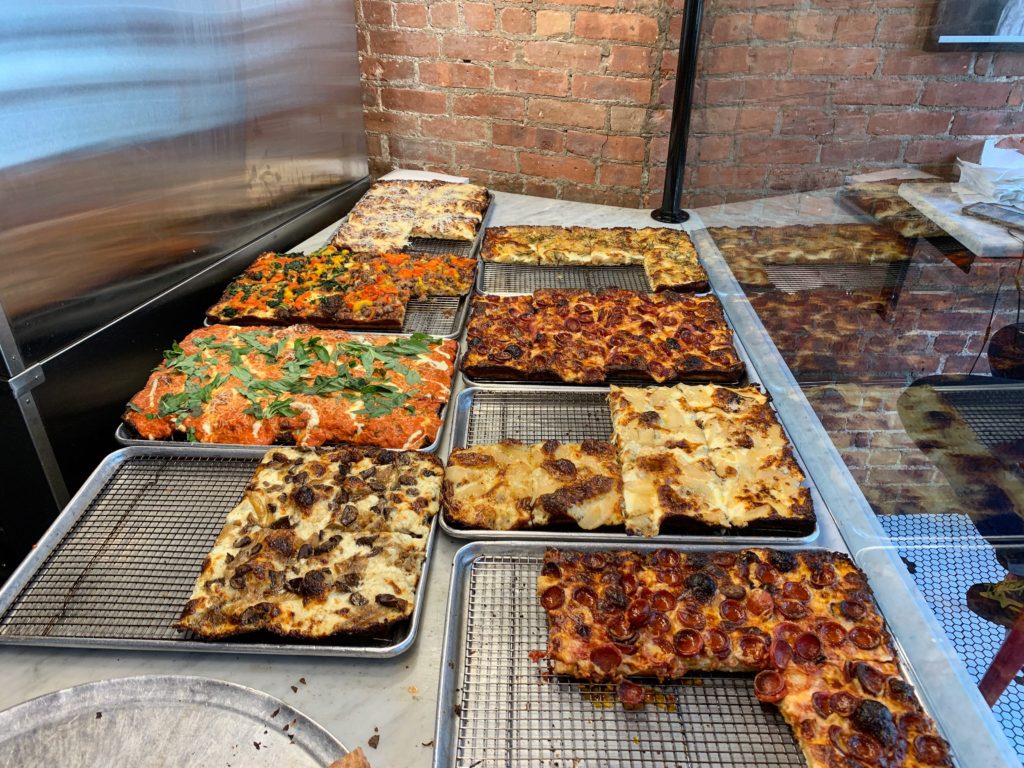 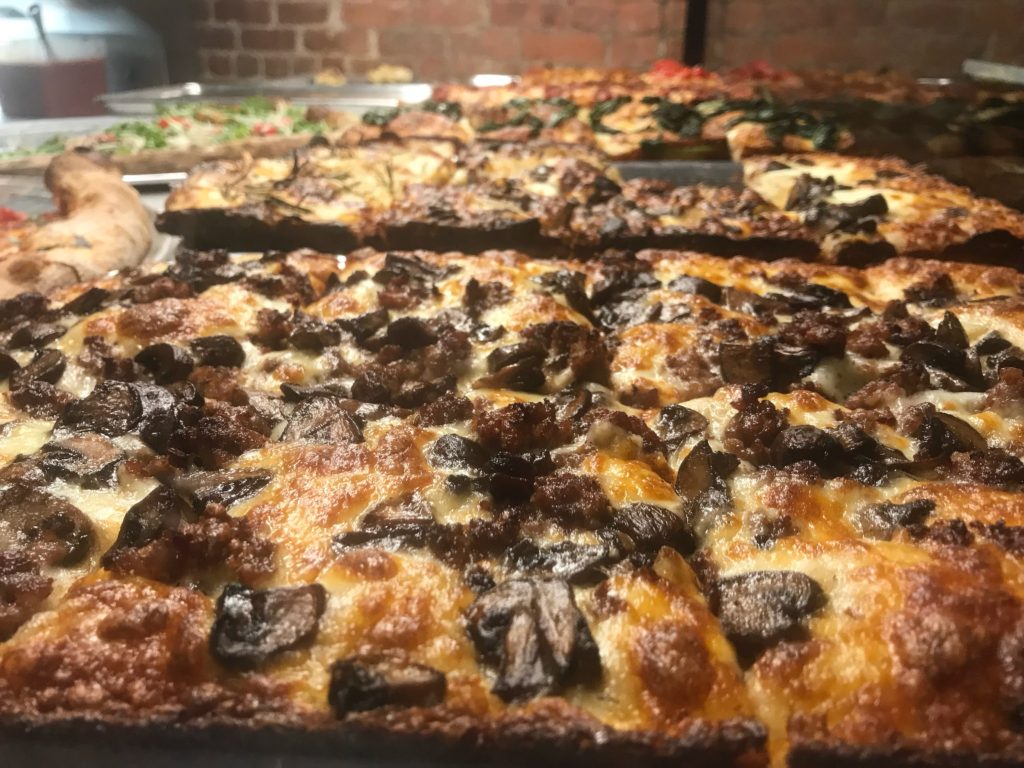 Before we get into the pizza itself, it’s worth mentioning how Mama’s Too came to be. Owner Frank Tuttolomondo comes from a family which has owned pizzerias in the neighborhood for decades. The name Mama’s Too (frequently mispronounced by friends as Mama Too’s) is a reference to Mama’s Pizza, which is located one block away on 106th Street and Amsterdam Avenue. It’s operated by Frank’s parents. Although I haven’t been to the namesake shop, Tuttolomondo has seemingly leveraged his family background and pizza making experience to create an elevated product at his new place. Mama’s Too isn’t the only pizzeria that is serving what’s become known as a retro (or neoclassicist) slice. But it’s definitely the best. Paulie Gee’s Slice Shop, Upside, Best Pizza, Corner Slice, Scarr’s and others have been leading the movement to redefine (or at least, reinvigorate) the New York City slice scene. Using superior ingredients and processes often reserved for haute cuisine, they are putting the dollar slice (and even the $3 slice) to shame. 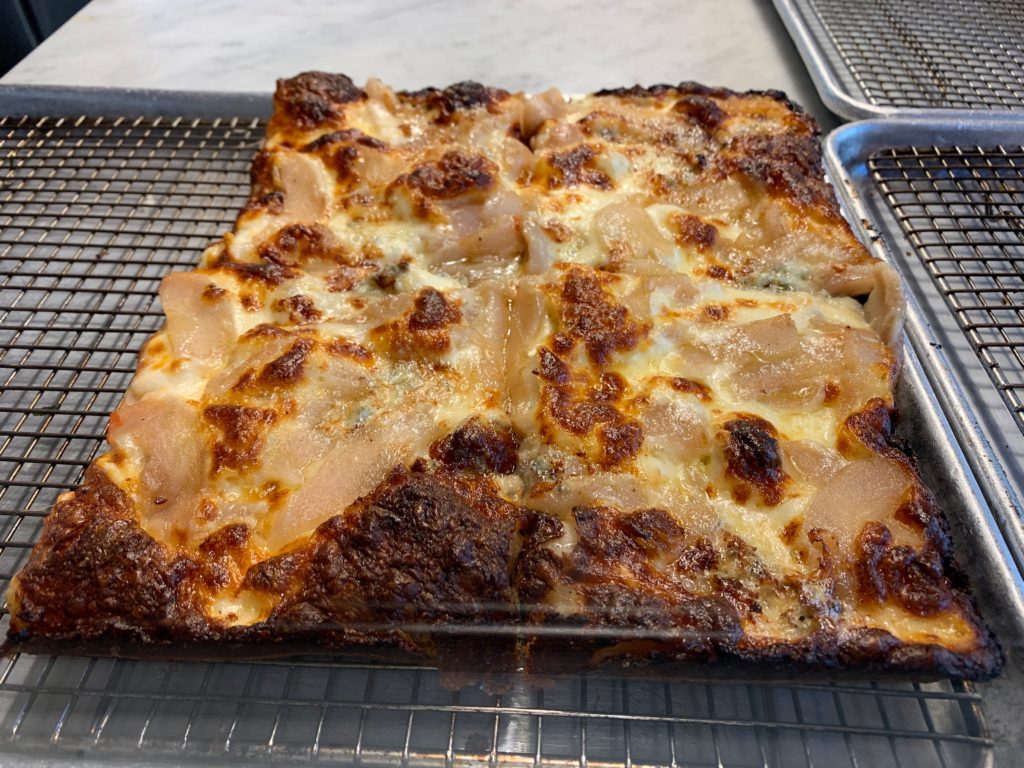 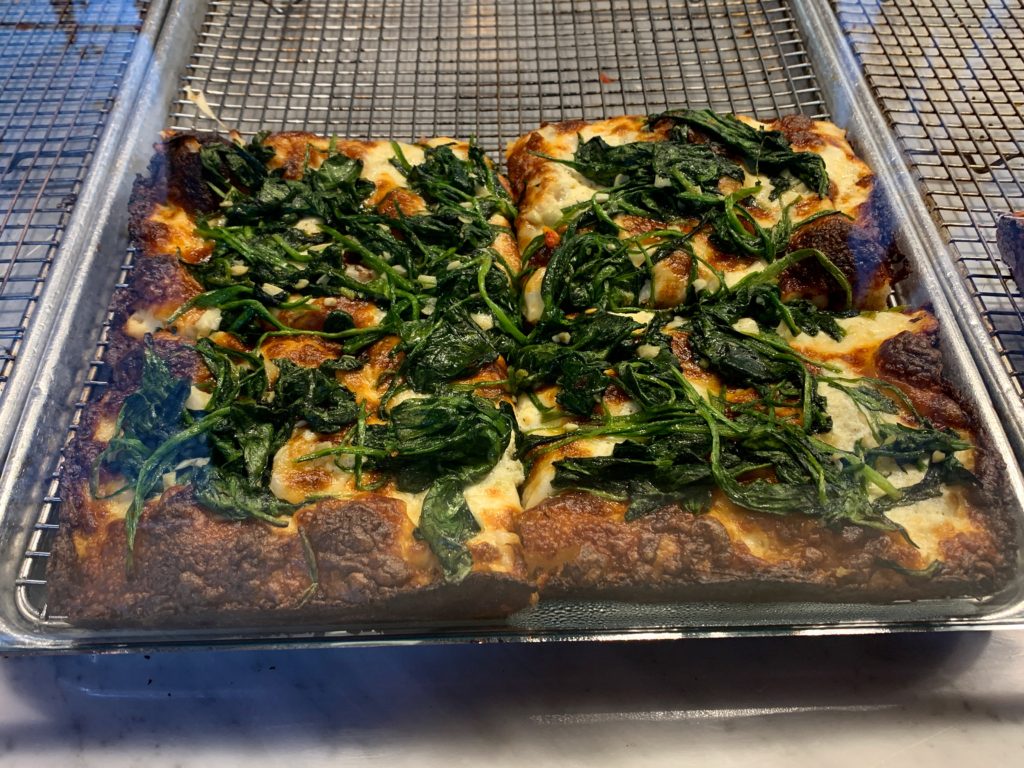 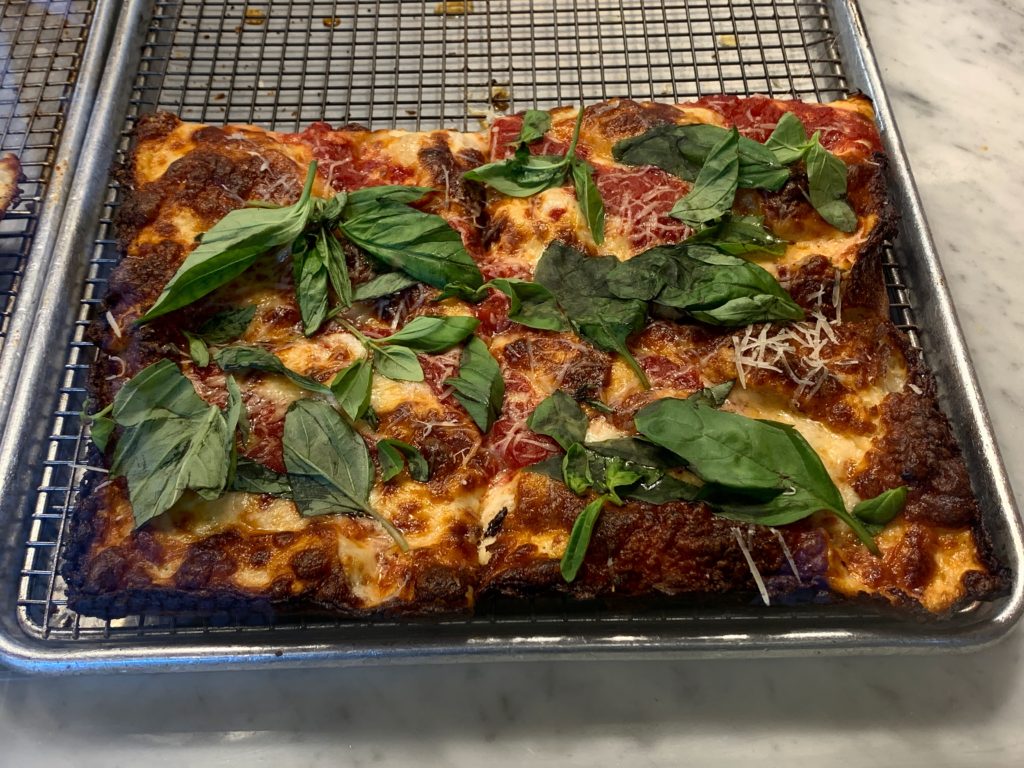 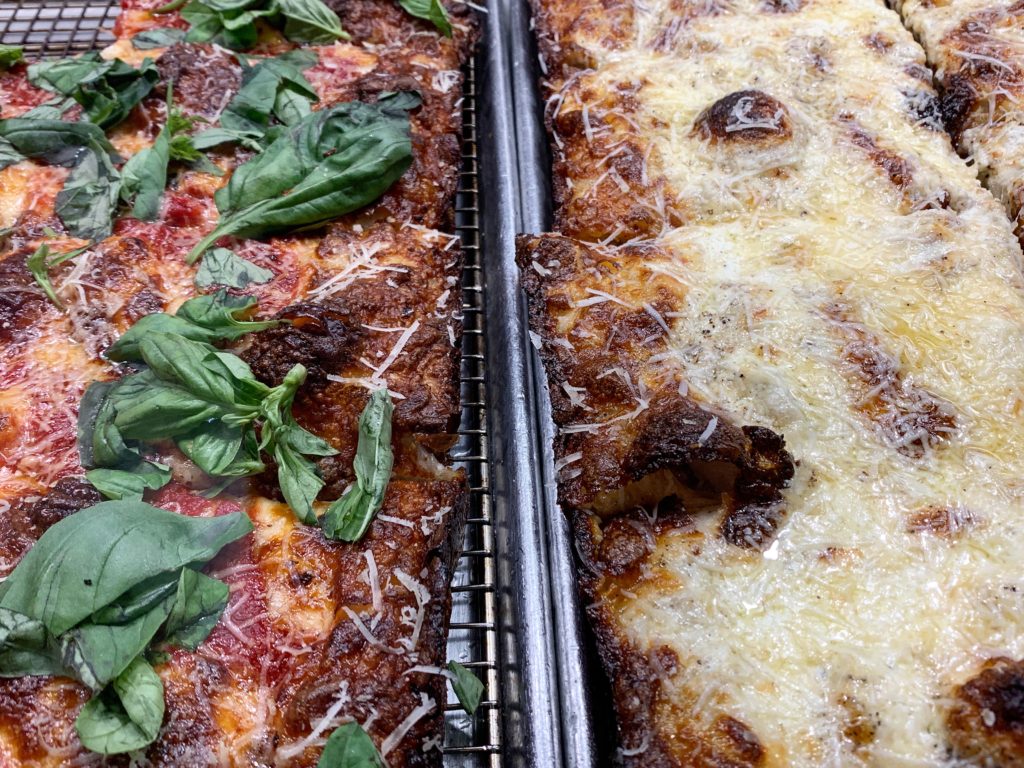 There are both traditional round pies and square pies that are available at Mama’s Too (although during a few of my visits only square pies were available). Both are worth ordering and offer different advantages. My favorite traditional slice is the “house slice” which, if your lucky, will be topped with a heap of fresh basil. The first bite has the slightest amount of crunch — it’s not too droopy — and then as you work your way through the slice, you get more of that crispy element in each bite. The high quality cheese and sauce stand out and some Di Fara-esq qualities shine through. 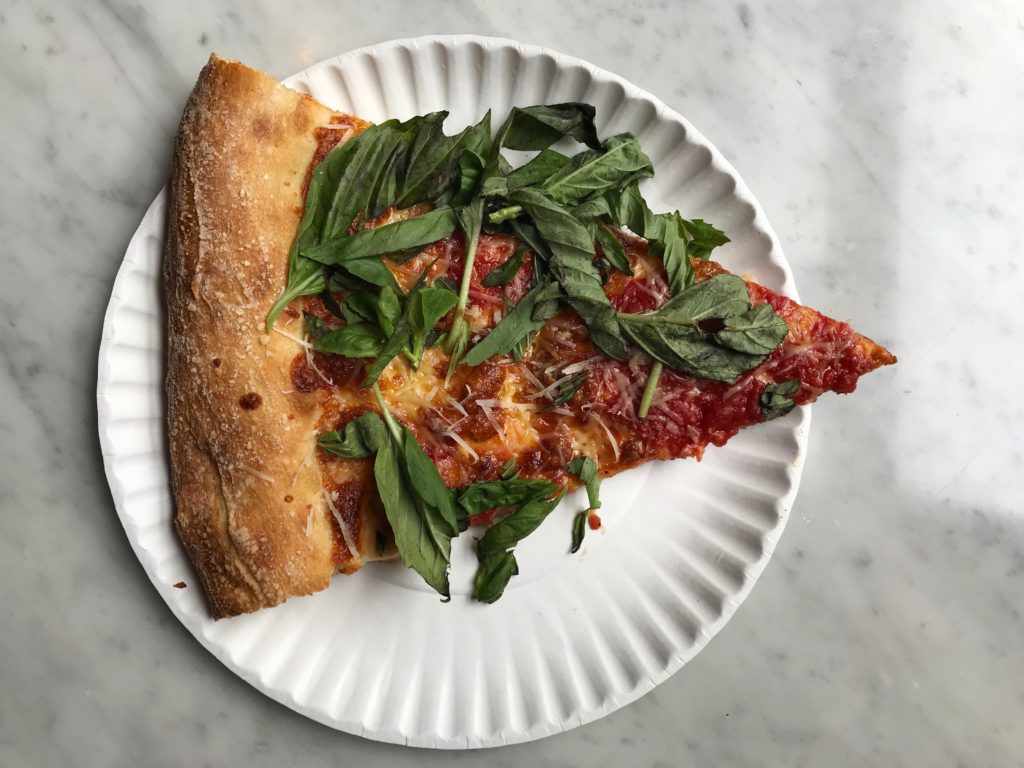 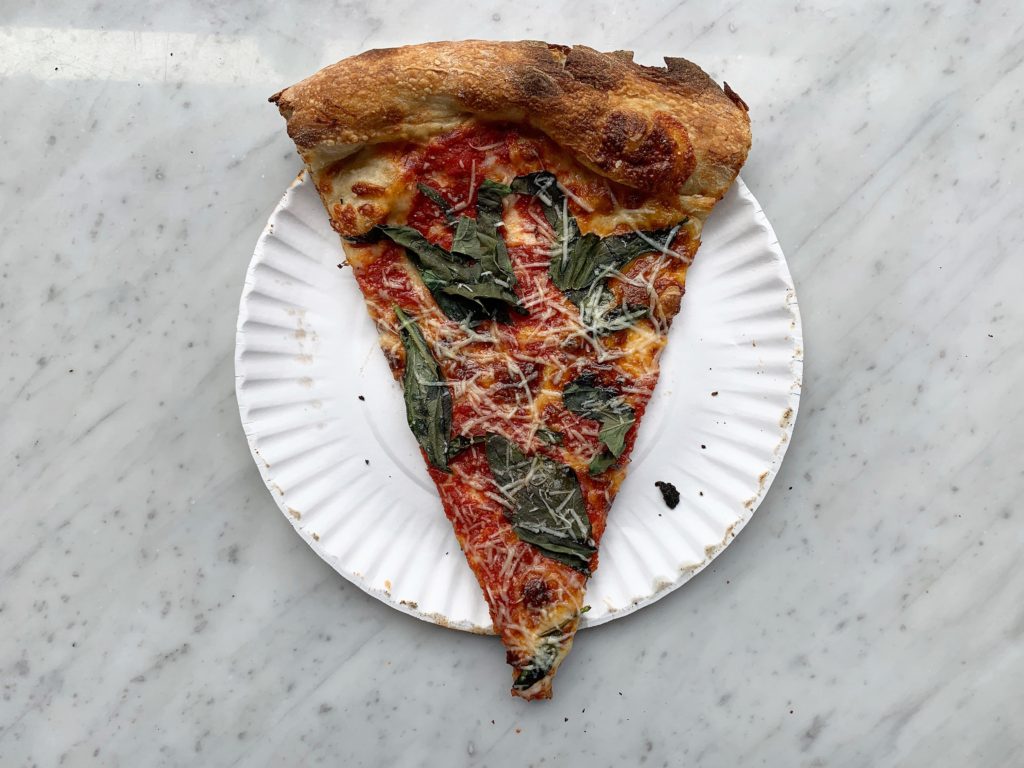 As appetizing as the regular slice is, I might love the square slice even more. In packs more crunch and there are often more choices when it comes to the squares. My favorite, hands down, is their vodka slice. It’s incredibly creamy and both the sauce and cheeses come together in a way that I’m not sure I’ve ever tasted on pizza. Add in a crunch that is reminiscent of a Detroit-style slice, throw on some basil, and you’re toying with pizza perfection in my book. Over and over again, this slice is consistently delicious. 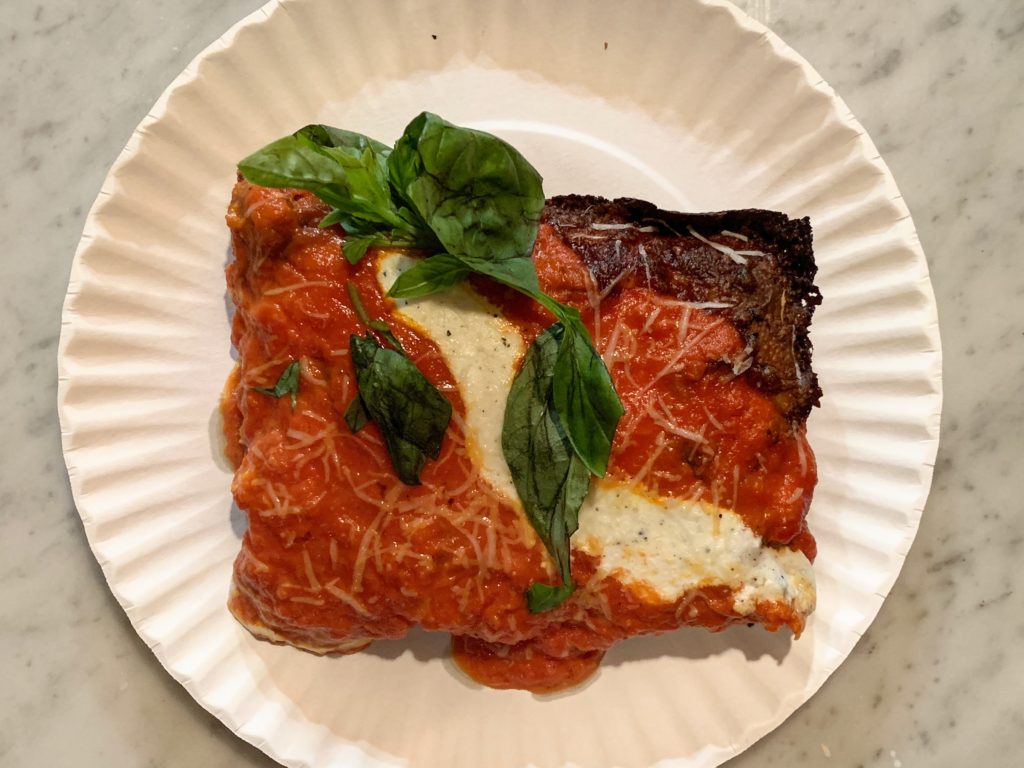 My next favorite square slices comes in the form of cacio e pepe (sometimes referred to as a “four cheese” slice by the cashier). I’ve only seen it being served a couple of times, but it’s remarkable. It takes all of the best elements and flavors of a cacio e pepe pasta and reinterprets them in pizza form. While the vodka slice is sauce heavy, this one is cheese heavy. And the crust, which is consistent from pie to pie, is a great canvas for this masterpiece. 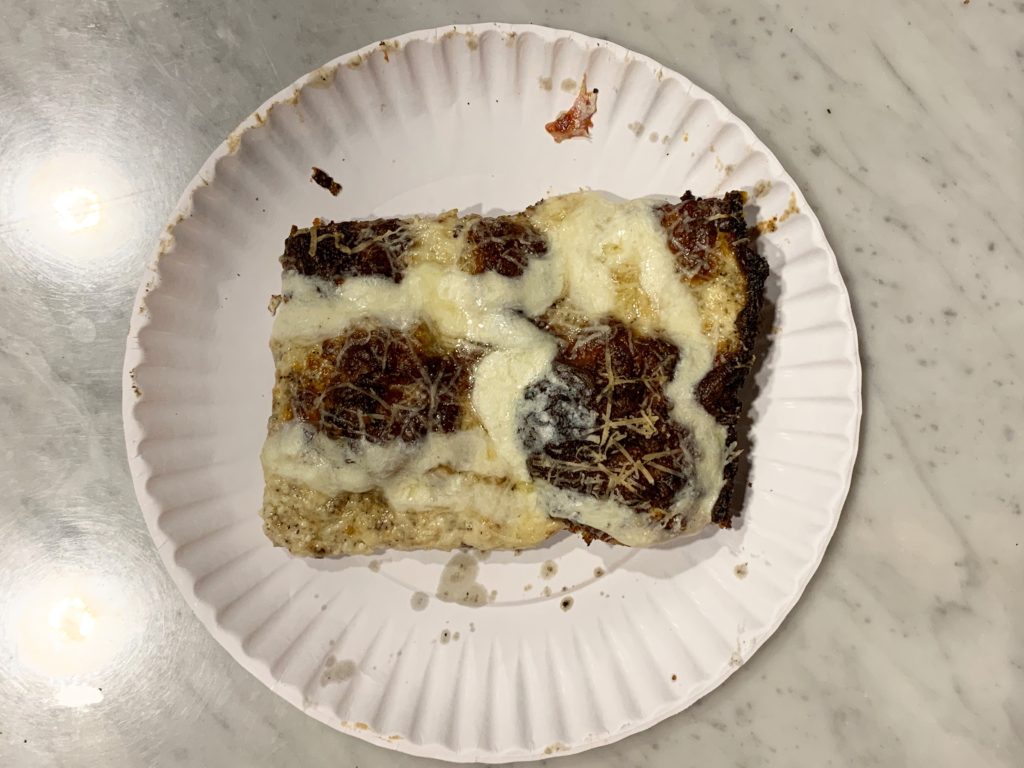 What would likely be my favorite slice at any other pizza spot, is a little disappointing in the context of the other slices at Mama’s Too. The square onion and mushroom slice doesn’t pack as much punch as some of the others, with the chewy mushrooms overshadowing the onions. But complaining about this slice is like brushing off Klay Thompson as ONLY the third best player on the Warriors (I know this analogy might not age well, but I’m using it anyway). 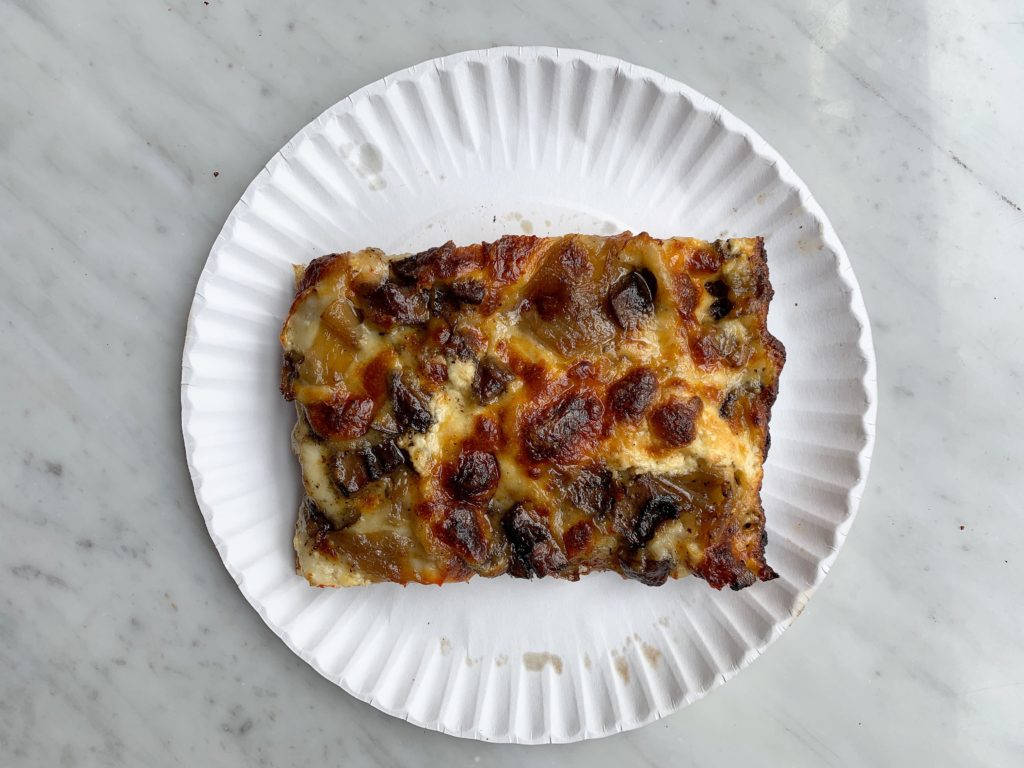 Mama’s Too is the slice spot that every corner deserves. But the residents of Morningside Heights — and the nearby Upper West Side — are lucky to have this in their neighborhood. And for everyone else… it’s really just a short ride on the 1/2/3 train. Now that the crowds have died down a bit, it’s unlikely you’ll encounter wait times like at Di Fara or Lucali. It’s hard to compare a place like Mama’s Too to a traditional New York slice shop like Joe’s. But in a head to head matchup, I’m going to side with the newcomer at the moment. How Mama’s Too evolves over time will be interesting to see. At the moment, however, I’m comfortable declaring it the most exciting and delicious pizza place to open in Manhattan since I’ve lived here over the past 20 years. 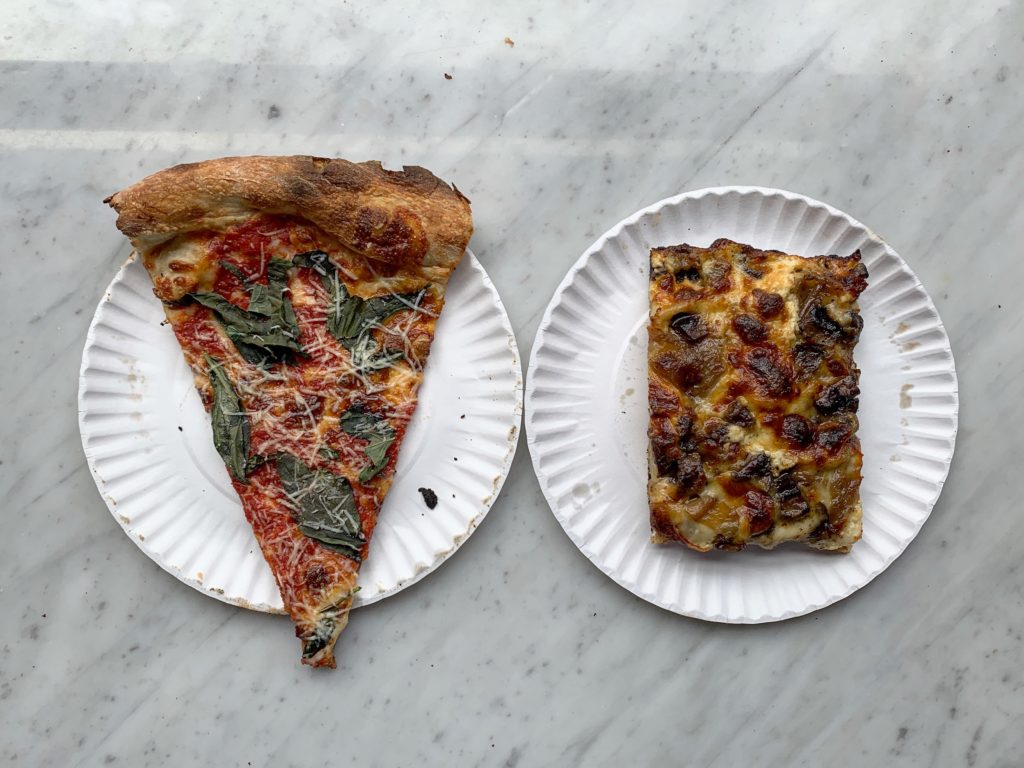 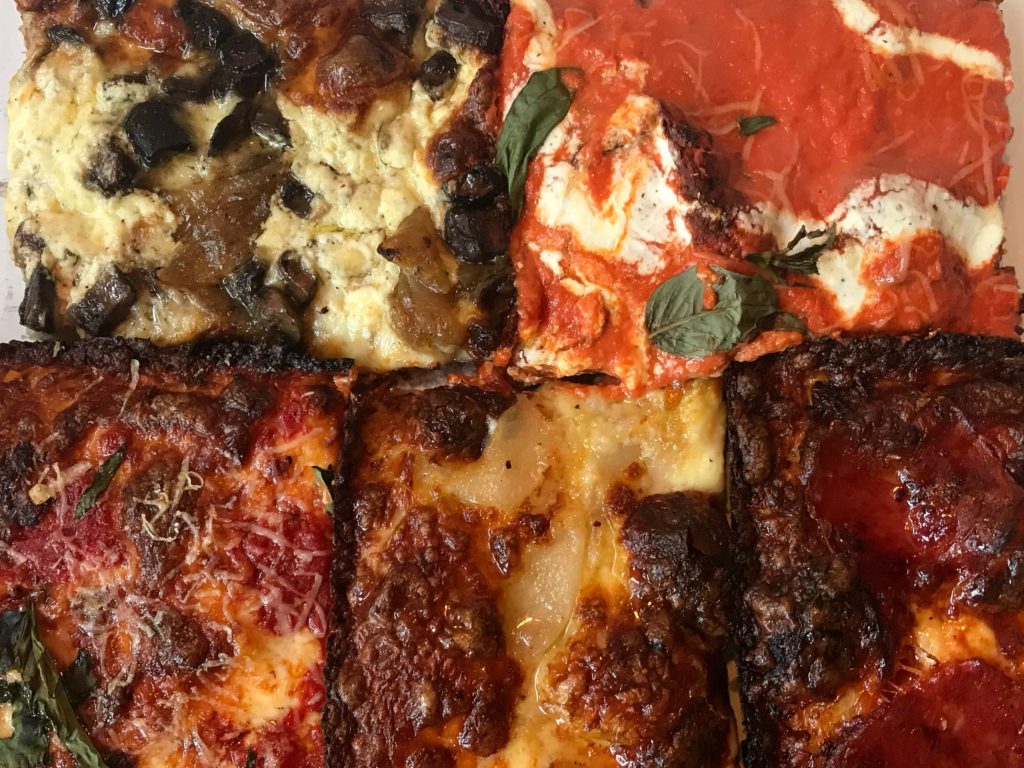 2019-08-08
I Dream Of Pizza
Previous: At Garage Bar In Louisville, Pizza In A Former Gas Station
Next: Pizza On Campus: Strada At The University Of Wisconsin