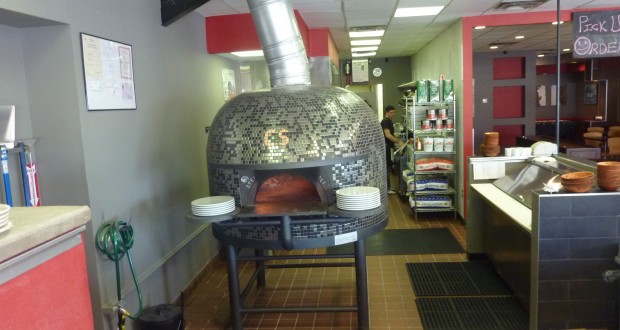 Growing up in the Washington, DC suburbs there were not an abundance of options for pizza beyond the standard chains. Some of my favorite childhood spots, however, included Guiseppi’s Pizza and Ledo Pizza – which serve relatively traditional pies, each with its own spin. But one style of pizza that was nowhere to be found …

Summary : The fact that a place like this exists in my hometown of Rockville, Maryland is impressive. But the execution just wasn't there. Hopefully over time the quality of their pies will improve.

Growing up in the Washington, DC suburbs there were not an abundance of options for pizza beyond the standard chains. Some of my favorite childhood spots, however, included Guiseppi’s Pizza and Ledo Pizza – which serve relatively traditional pies, each with its own spin. But one style of pizza that was nowhere to be found in my hometown was Neapolitan. As the number of Neapolitan pizza spots has skyrocketed throughout the country in recent years, it was only a matter of time before Rockville, Maryland got what I believe to be the city’s first pizza place serving exclusively Neapolitan pies. 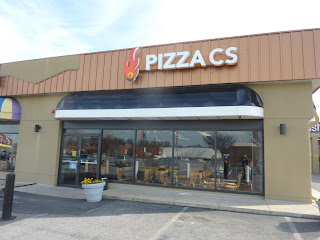 Pizza CS (1596-B Rockville Pike) is located just off the city’s main commercial drag — a few steps away from the likes of Fudruckers, Hooters, Baja Fresh, and nearly every other chain you can imagine. It was opened by two friends – Jonathan and Ankur – and they were both there the morning I swung by. The place itself is pretty bare bones — featuring an open kitchen, a counter where orders are placed, and space for about 50 diners. They hope to open an outside area when the weather is nice.

There were two things I particularly liked about the space. First, it’s decorated with fantastic art which will be rotating on occasion. Second, there are games in the back including foosball. It only makes sense then, that Pizza CS would and should be catering to families. The pizza there is certainly better than any fast food pizza you might come across. Anyone who is planning on ordering Domino’s would be more satisfied with a pie from Pizza CS. 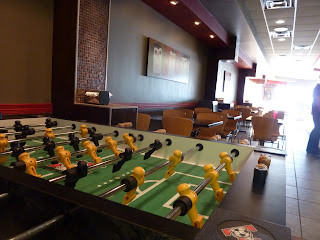 When it comes to Neapolitan pizza, however, I have high standards. I just came back from Italy. I’m certainly not the restaurant’s target customer. That’d be a young couple and their children. By New York standards, the pizza just isn’t that good. But, for now, it’s the best Neapolitan pizza in the area which is what’s important for Pizza CS. And as more competition will certainly arise in the coming years, I’m confident that the restaurant will continue to hone its pizza and business model.

There are 20 pies on the menu there — which is probably a few too many. The restaurant should focus on it’s ten best and expand later on (the place itself reminded a lot of Ah’ Pizz in Montclair, NJ, which has 13 pies on the menu). One, The Moto, is inspired by the brussels sprouts pie at Motorino. They are priced between $8.00 and $13.00 which seems reasonable considering similar pies might cost up to $5.00 more in New York. We tried a Margherita and Quattro (Fresh Mozzarella, Smoked Mozzarella, Ricotta, Gorgonzola, Garlic and Oregano). Both were tasty, if not slightly undercooked. The cheese on the Margherita could have been a bit more melted, as was the case with the Quattro too. These are all kinks that can be worked out. 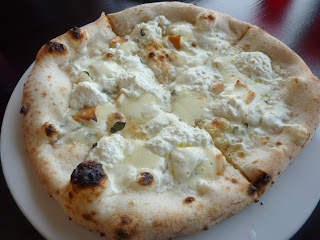 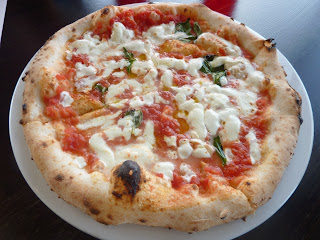 I am proud that my hometown has a place like Pizza CS. As a teen, I would have loved to swing by after school, down a pie and play some fooseball in the back. The restaurant’s survival is dependent on whether or not enough people know they are there. The demand should certainly be high enough. But with the more visible Matchbox located just across the street (the full-service restaurant serves 16 pies), it might be tough luring customers over. Personally, I’ll be sticking to Guiseppi’s Pizza and Ledo Pizza when I am home, but Rockville natives should check out Pizza CS and decide for themselves.