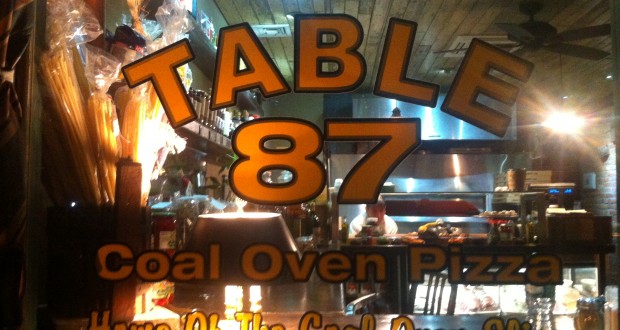 My friends and I recently paid a visit to Table 87 (87 Atlantic Avenue) in Brooklyn Heights to try nearly every pie on their menu. Table 87 is doing a couple of things of note which make it stand out of the pack. First off, they use a wood stone coal-fired pizza oven. You see, …

Summary : Table 87 is the only pizzeria in Brooklyn to serve slices from a coal fired oven. Some of their more unique pies, namely their breakfast pie and dessert pie, stand out of the pack here.

My friends and I recently paid a visit to Table 87 (87 Atlantic Avenue) in Brooklyn Heights to try nearly every pie on their menu. Table 87 is doing a couple of things of note which make it stand out of the pack.

First off, they use a wood stone coal-fired pizza oven. You see, current regulations ban coal fired ovens in NYC unless you’ve been grandfathered in. But new a oven technology, which is utilized by Table 87, finds a way around that. A company called Woodstone manufactures ovens that enable pizza to be cooked in a stone hearth. The heat comes from multiple sources one of which is coals. The details of the oven — and regulations surrounding coal ovens in general — still baffle me. But what’s important here is that Table 87 is able to achieve the effect of a coal fired oven. A higher oven temperature often results in a shorter cook time and coal fired pies tend to be slightly crispier.

Second, Table 87 has a sit down restaurant, but also serves its pizza up in the front of the restaurant by the slice. Even though the pizza doesn’t come from an old-school coal oven, they are still the only Brooklyn pizzeria to serve coal-fired pizza by the slice. At $3.75, they are some of the more expensive slices you can find. 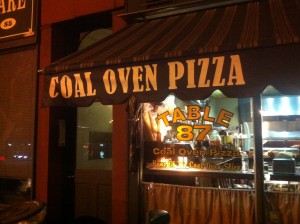 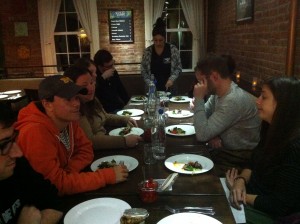 My friends and I dined in and took up nearly half of the restaurant which seats about 30 people. We tried nine pies — two “normal” sized pies and seven “personal” pies (it’s worth noting that the slices up front are from the normal sized pies). The Margherita pie is very tasty and in the upper tier of New York City pizza pies. Their seasonable vegetable pie was a Sicilian style pie which I enjoyed much less. It was thick and crunchy. The crust was slightly overcook and there were simply too many vegetables on top. One of those vegetable was broccoli which I’m not sure I’ve ever seen on pizza and could have done without. If you’re getting a slice, I’d keep things simple and stick with the Margherita. 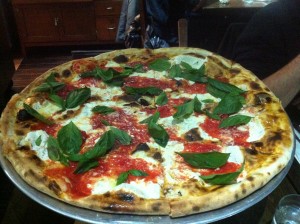 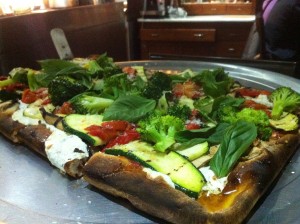 As far as the personal pies, my two favorites were the breakfast pie and the dessert pie. The breakfast pie contains cheese, basil, pancetta and two farm eggs which are cracked on the pie as the pizza comes out of the oven and mixed in at your table. The dessert pie was one of the best I’ve ever had and featured nutella, strawberries and marshmallows. Although I usually prefer my dessert pies with banana, this was overshadowed by the delicious toasted marshmallows which melt in your mouth — literally. All the other pies were solid, although the two arugula heavy pies didn’t taste particularly different from one another. One had arugula, mozzarella, tomatoes, fig and speck while the other had arugula, mozzarella, tomatoes and prosciutto. It doesn’t make sense to order both. On the first pie, Table 87 should nix the arugula and crank up the fig which will make it stand out more. Fig is an underutilized pizza topping and this is certainly an opportunity for differentiation. 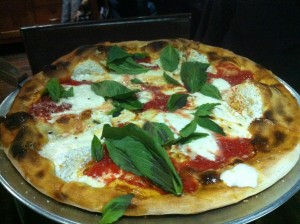 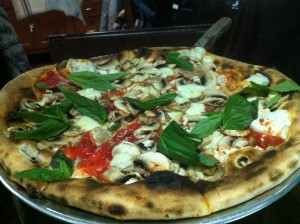 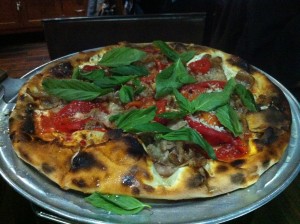 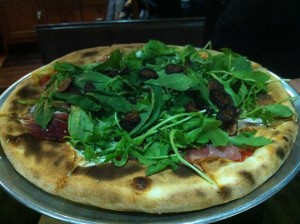 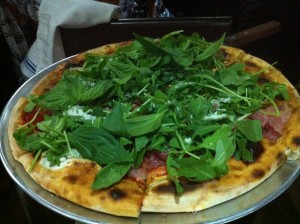 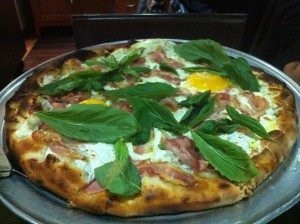 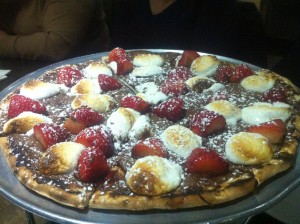 So is Table 87 worth your time? It sure is. Swing by for a Margherita slice. And if you’re sitting down, check out the breakfast pie and dessert pie. There aren’t a whole lot of good pizza places in the immediate vicinity and Table 87 has that cozy, neighborhood vibe that should make it a regular destination for residents of Brooklyn Heights and the surrounding neighborhoods including Cobble Hill and the Columbia Street Waterfront District.