WHAT'S NEW?
Home / Reviews / USA (Non-NY) / Pennsylvania / A Delicious "A Piece Of The Strip" In Pittsburgh 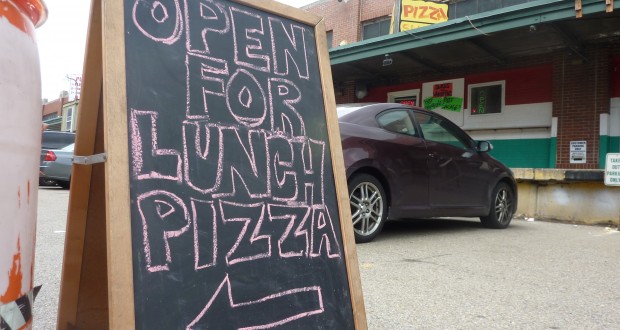 The final leg of my recent road trip through the Midwest brought me and my friends to Pittsburgh for one night. I had no plans of eating pizza there. Believe it or not, I’d had just about enough pizza throughout the trip after stops at We, The Pizza in Washington DC, Pizza Oven in Canton, …

The final leg of my recent road trip through the Midwest brought me and my friends to Pittsburgh for one night. I had no plans of eating pizza there. Believe it or not, I’d had just about enough pizza throughout the trip after stops at We, The Pizza in Washington DC, Pizza Oven in Canton, OH, and Lou Malnati’s, Great Lake, and Spacca Napoli in Chicago, IL. Besides… I didn’t think I’d be missing out on much if I were to forgo pizza in Pittsburgh. Less pizza means more Pimanti Bros.

As we made a stop at the famous sandwich stop just before leaving town, my eyes were drawn to a small window serving pizza at 1917 Smallman Street, just across the street from the original Pimanti Bros location at 46 18th Street. It looked like the kind of place that would have been somewhat secretive if not for all of the signage directing traffic to the shop. I had to try it out. 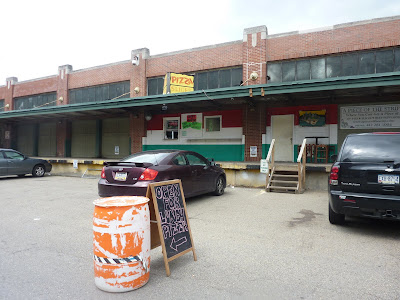 Just as it appeared from the street, the shop consisted of one small window through which you could place your order. Slices were $2.00 each and pies ranged from $8.00 for a medium to $14 for an XXL. You’d think with those sizes the place would be selling t-shirts. I’d sure like to see what an XXL pizza looks like, but nobody ordered one while I was there. In fact, nobody ordered much of anything.

A Piece Of The Strip is located in Pittsburgh’s Strip District, historically the area’s garment district. Now it serves a variety of clientele. During the day the area is dense with shops – many of which sell food or clothing and are located on Penn Avenue. At night, much of the Strip District appears abandoned although bars and lounges are sporadically situated throughout the neighborhood. Thus, in theory, the pizza place could cater to shoppers during the day and party-goers at night, much like a pizza shop in Chelsea or the Meatpacking District might do.

But unfortunately foot traffic doesn’t compare to that in New York City and from my brief conversation with the man behind the counter, it would appear that business is struggling. It’s too bad. The slice I had was delicious. And it would have been just as great at 2AM as it was at 2PM. 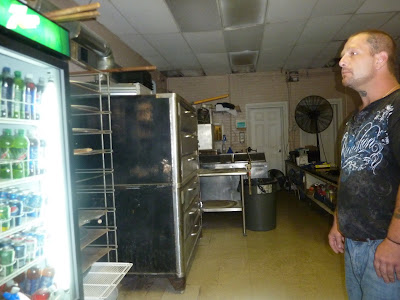 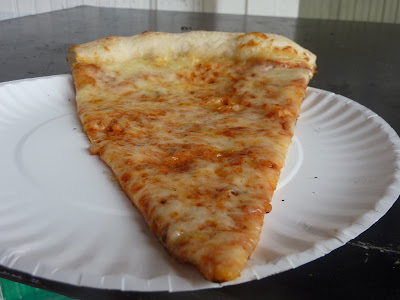 The pizza reminder me of something I’d get at a typical slice joint in New York — which says a lot for pizza in Pittsburgh. So many people leave New York and complain that they can’t find a slice of pizza that reminds them of the city. Well such a place exists in Pittsburgh. Although the fact that I’d been away from New York for two weeks might have contributed towards my thoughts about this slice, it was a nice break from the more upscale places I’d spent my time trying throughout the trip. This was a no frills spot that got right down to business. You could spice up your slice with ten different toppings; the most interesting were gyro meat and lemon pepper chicken.

There are a couple of tables situated outside of the window, but it is essentially a take-out spot. There’s a great painting of the Pittsburgh skyline situated on top of a slice which is visible in the photo below. It’s not the signature skyline you’d expect to see on a pizza. But it’s a testament to the fact that even in Pittsburgh there is a strong connection with pizza. It just so happens that I got an e-mail from a man named Doug the other day which reads: I live in Pittsburgh and at some point want to bring some authentic NY Pizza here. We have some decent shops but nothing compares to the New York slice. I was happy to respond to Doug with a recommendation that I’ll be passing along to anyone looking for a decent slice in The Steel City. 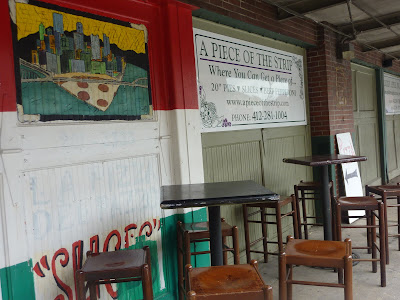 Tagged with: a piece of the strip best pizza in pittsburgh pittsburgh Pizza strip district