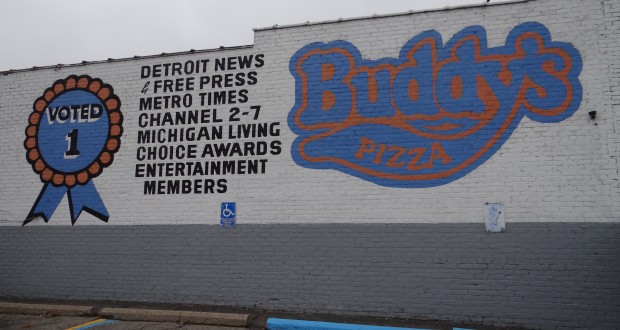 Detroit-style pizza has made a number of appearances on I Dream Of Pizza in recent months. Back in March of 2014, I tried my first Detroit-style pies in Austin — of all places — at Via 313. And more recently, Liz Barrett, the author of Pizza: A Slice of American History spoke highly of Detroit style …

Summary : Buddy's is synonymous with Detroit's famous rectangular pan pizza. Their original location should be a destination for all pizza lovers.

Detroit-style pizza has made a number of appearances on I Dream Of Pizza in recent months. Back in March of 2014, I tried my first Detroit-style pies in Austin — of all places — at Via 313. And more recently, Liz Barrett, the author of Pizza: A Slice of American History spoke highly of Detroit style pizza during my interview with her. So I figured it was about time I visited the source of this pizza style: The Motor City.

I was flown out to Detroit in December by the folks at Chowzter — a website dedicated to finding the world’s tastiest foods — for the sole purpose of eating pizza. You see, the site was preparing to nominate Buddy’s (17125 Conant Street) as one of the best pizza places in North America for 2015 and they wanted me to see for myself how great it is (I am one of many food bloggers who submit nominations and vote for Chowzter’s annual awards). So, I landed in Detroit around 11AM on a Sunday afternoon and headed straight for Buddy’s, which is about a 20 minute drive from downtown. 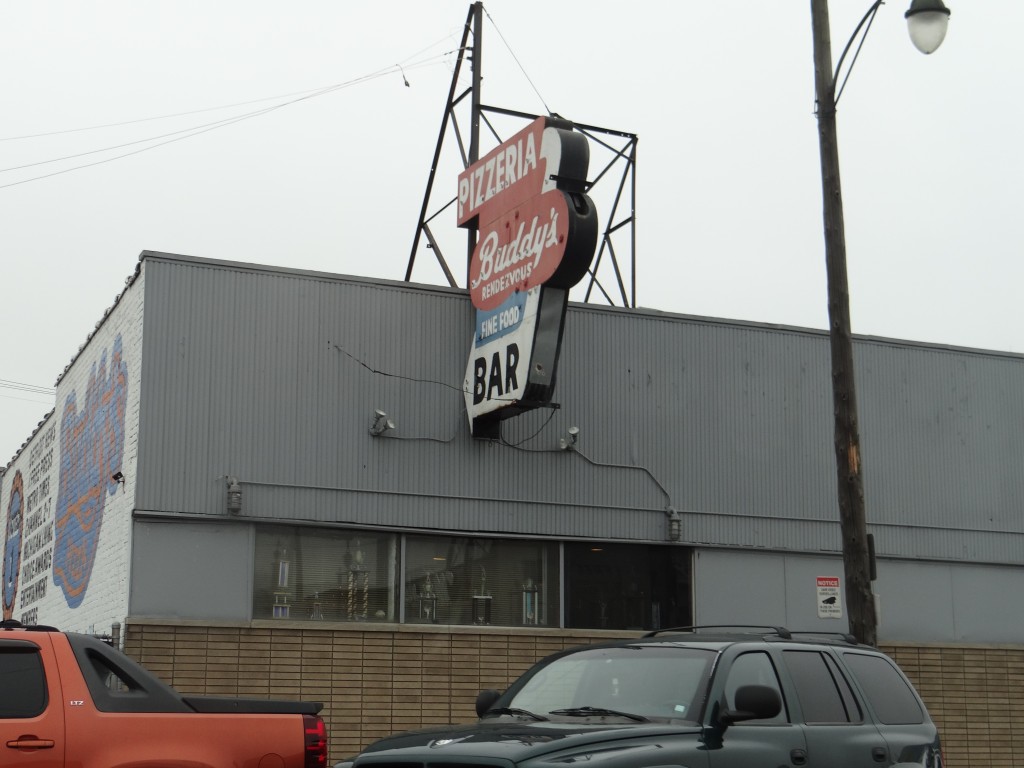 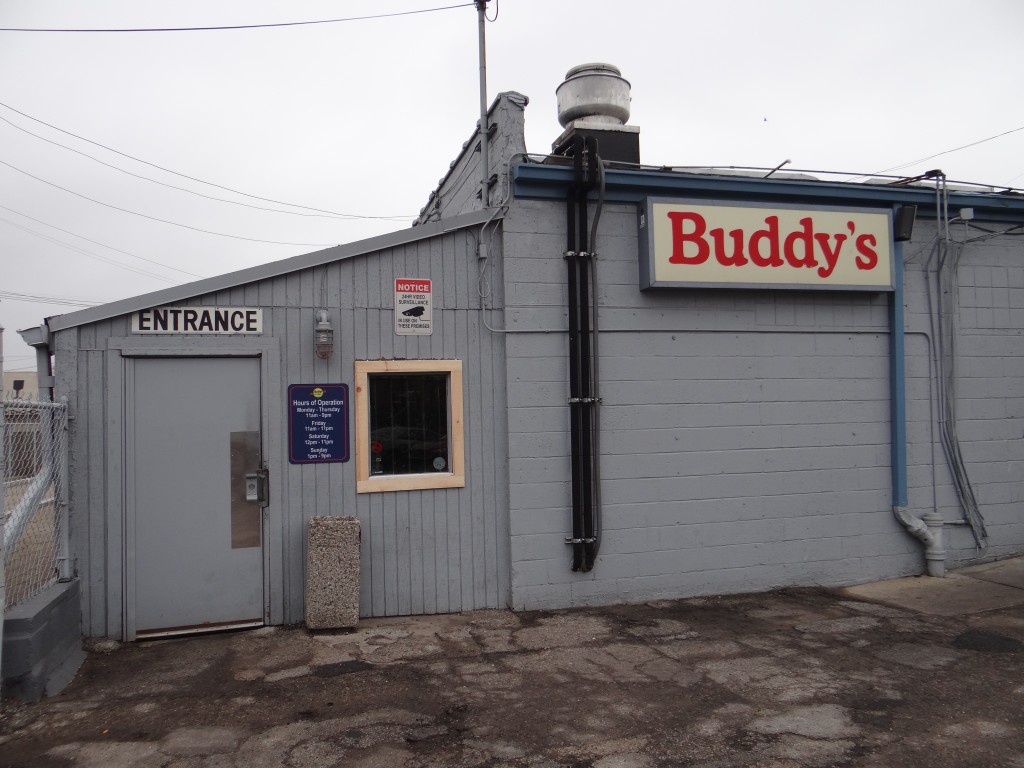 From the outside, Buddy’s doesn’t look like much. In fact, there isn’t much around other than gas stations, liquor stores, and empty lots. If Detroit is rebounding from the recession, you wouldn’t know it from this part of town. Don’t worry though — if you’re nervous about visiting this “seedy” area, the parking lot at Buddy’s has 24 hour video surveillance. The only indication that Buddy’s itself isn’t abandoned is the cars in the parking lot. From the outside, the place looks like a shack. 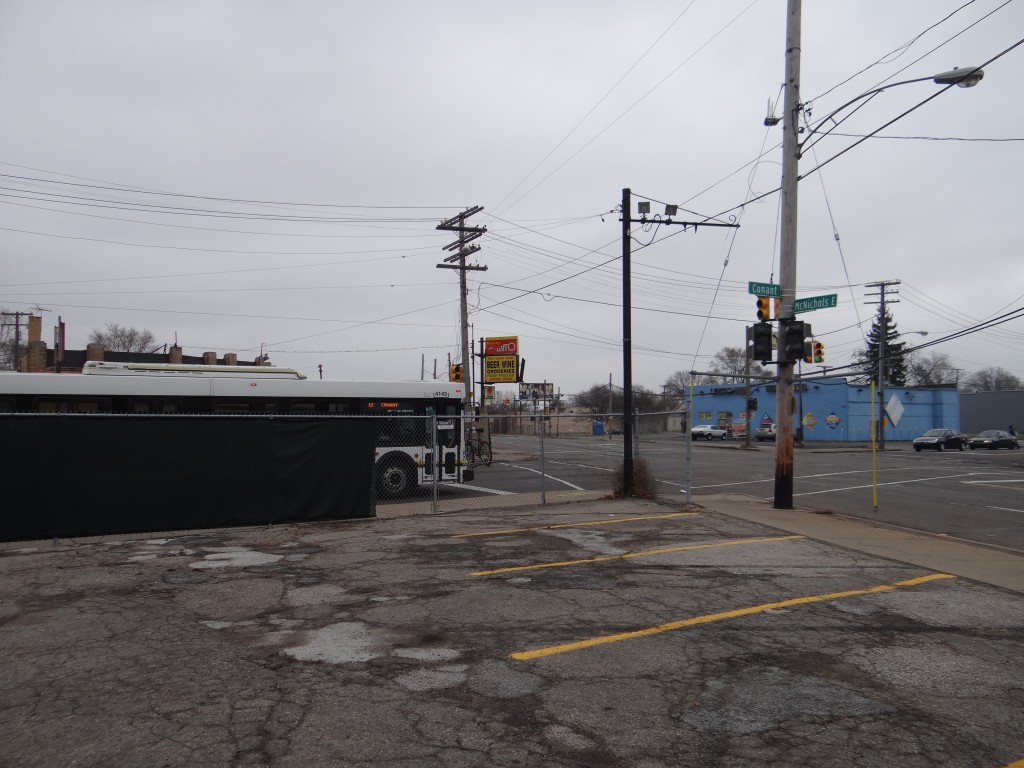 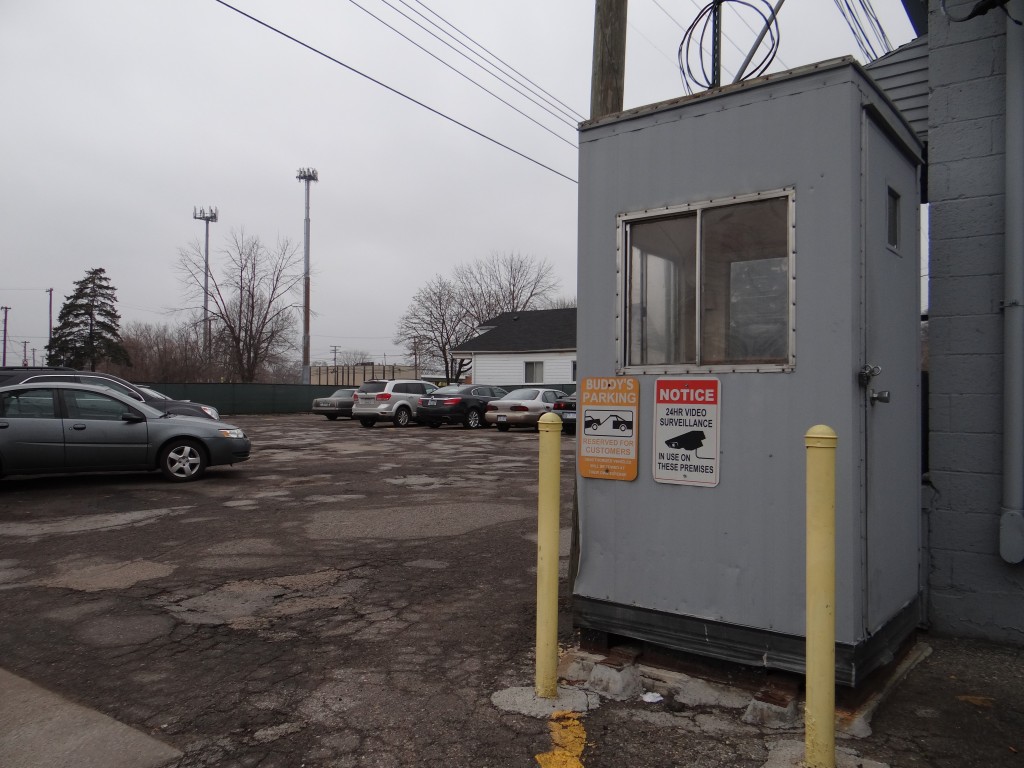 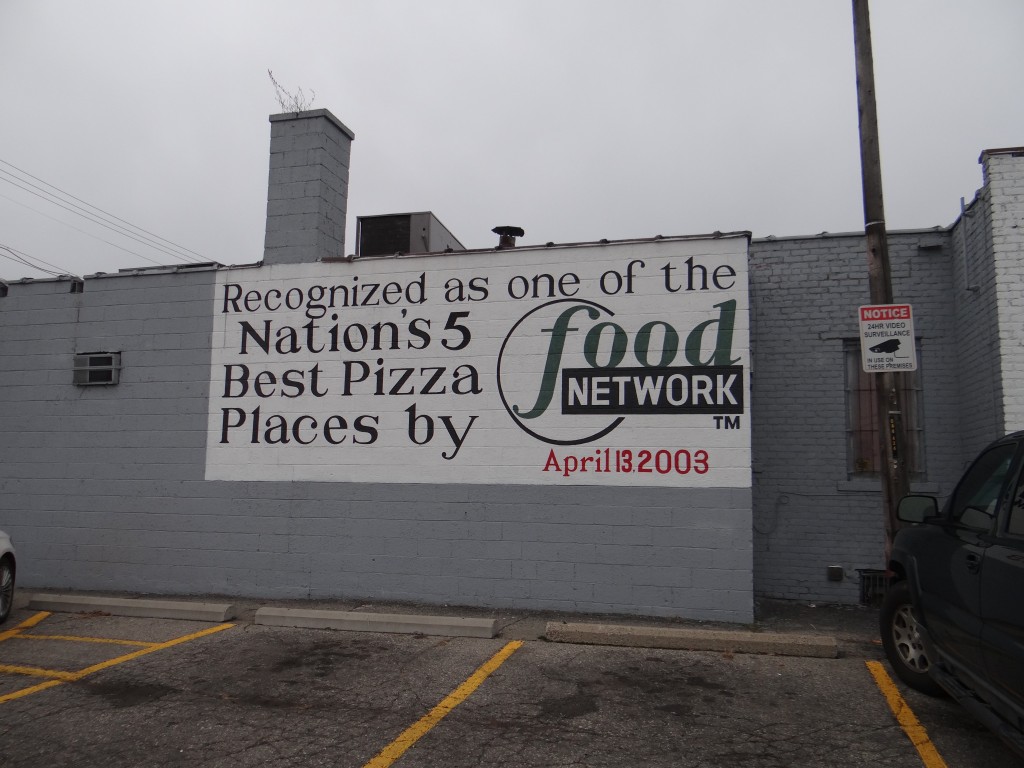 When you step inside, you’re first greeted by a wall of accolades and newspaper clippings (soon Chowtzer will have some real estate up there too, I hope!). Buddy’s pizza is well regarded and they aren’t afraid to let you know. It’s like walking through some sort of “Hall of Champions” on your way to the playing field. Expectations are sky high. 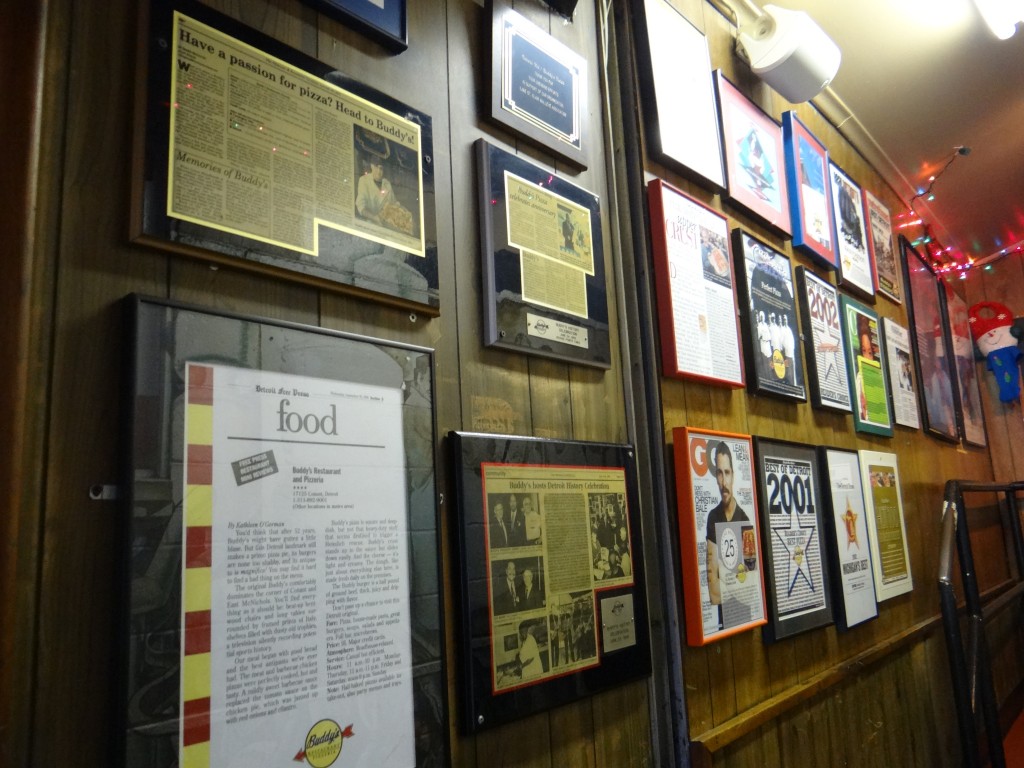 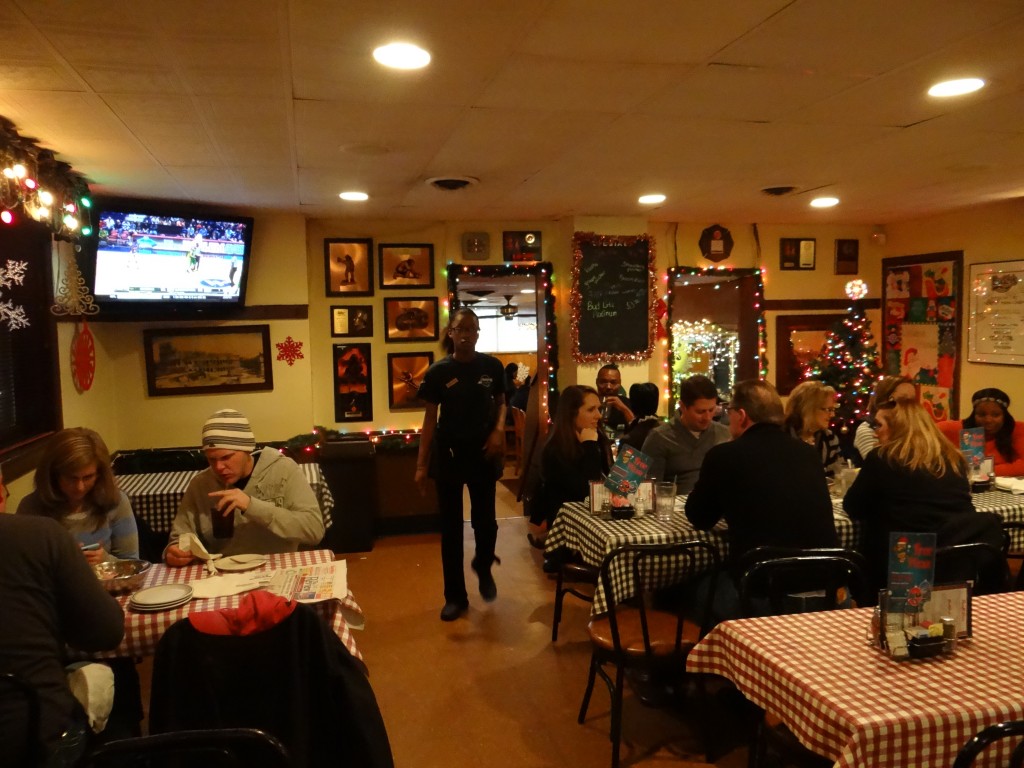 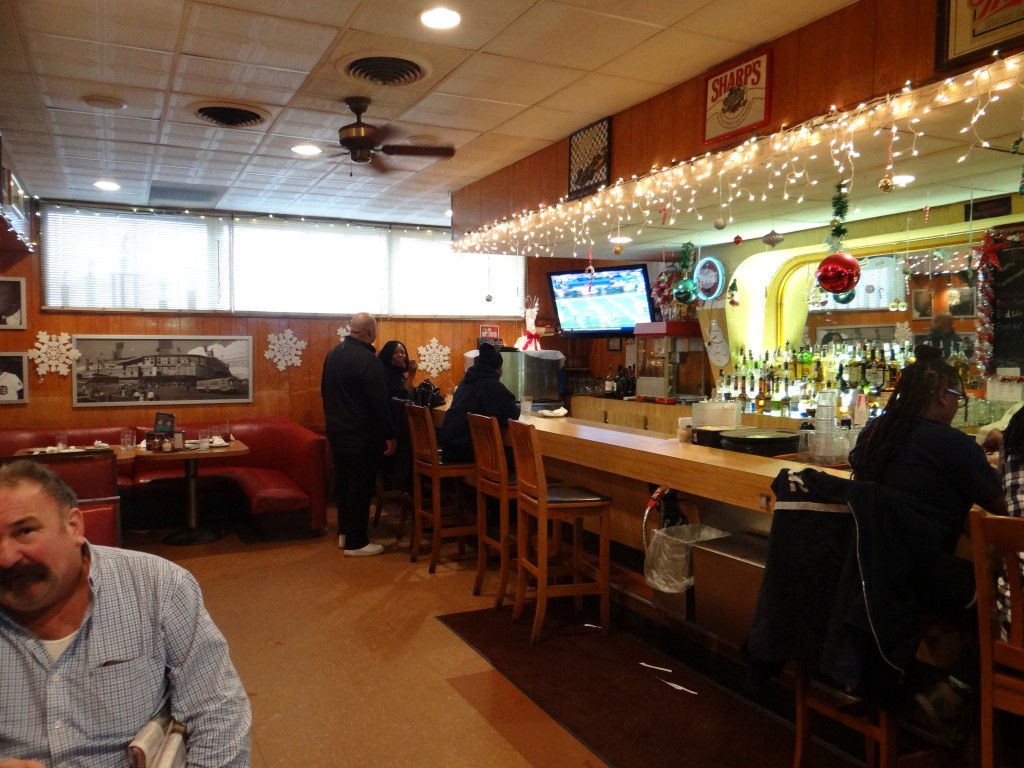 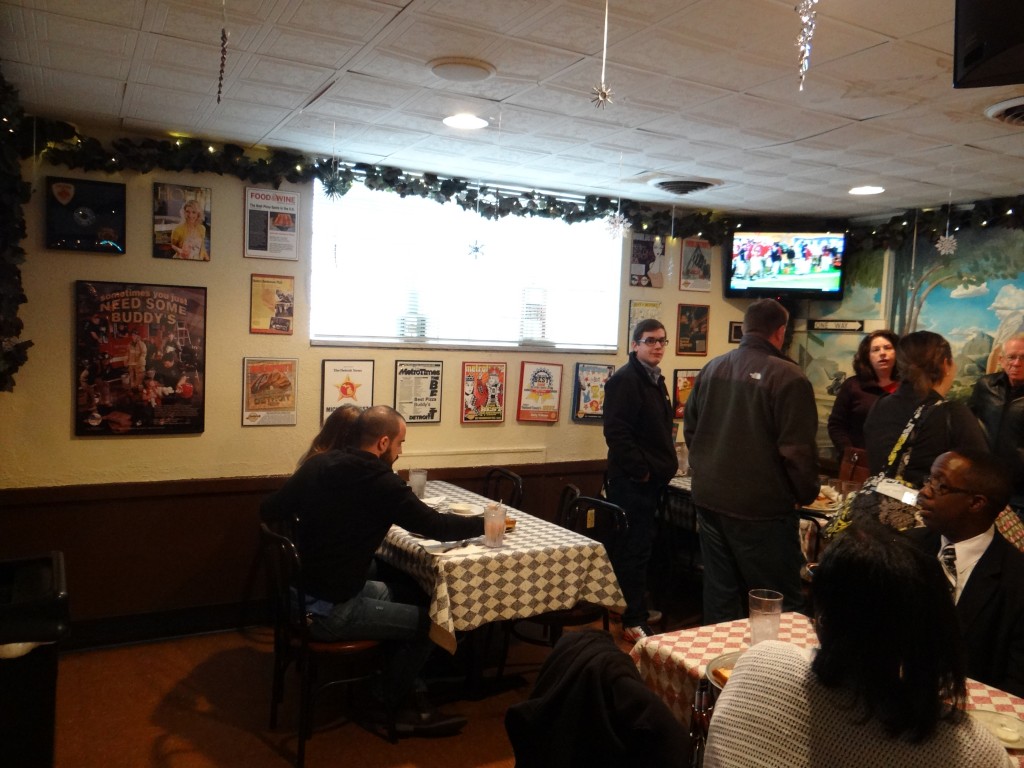 Before we get into the pizza — a brief primer on what exactly Detroit pizza is. Legend has it that back in the day, assembly line workers in Detroit factories would bring home auto pans from work for cooking and baking. And over time, pizzerias began to use those pans too. The industrial steel pans enable a crispy texture to form on the outside of the pie and many places like Buddy’s also add a little bit of cheese around the edge to caramelize the dough.

Some other notable difference about Detroit-style pizza — generally the cheese (Wisconsin Brick cheese) is put on the pie first from edge to edge, followed by toppings, and then finally the sauce is put on after the pie is cooked (this allows the cheese to cook into the bread) in two strips. If that wasn’t twisted enough, if you order pepperoni as a topping on your pie, they’ll put it underneath the cheese. According to Buddy’s this is to enhance the flavor and prevent charring.

Here is a close up of what pepperoni looks like when it is cooked underneath all of the toppings. 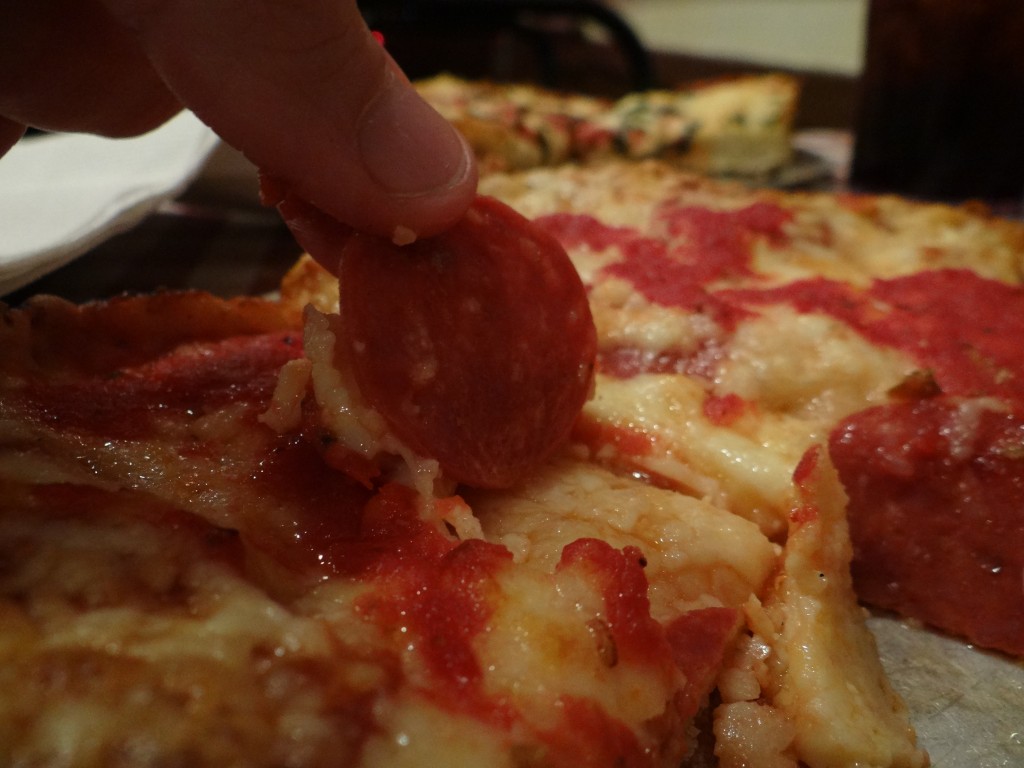 I ordered two small pies which contain four squares, compared with a large which has eight squares. I’d say a single small pie feeds one person, while two people can handle a large — maybe three if you aren’t very hungry. The menu is overwhelming. There are a dozen specialty pies, and nine signature pies (broken down into “Motor City Pizza Collection” and “Great Lakes Pizza Collection”). And then they have “Detroit’s Original Square Pizza” section which is basically the build-your-own pie part of the menu. I ordered a regular cheese pie with pepperoni on half. And then a “Detroit Zoo” pie from the “Motor City Pizza Collection” section which contained cheese, roasted tomatoes, basil, pine nuts and tomato basil sauce. 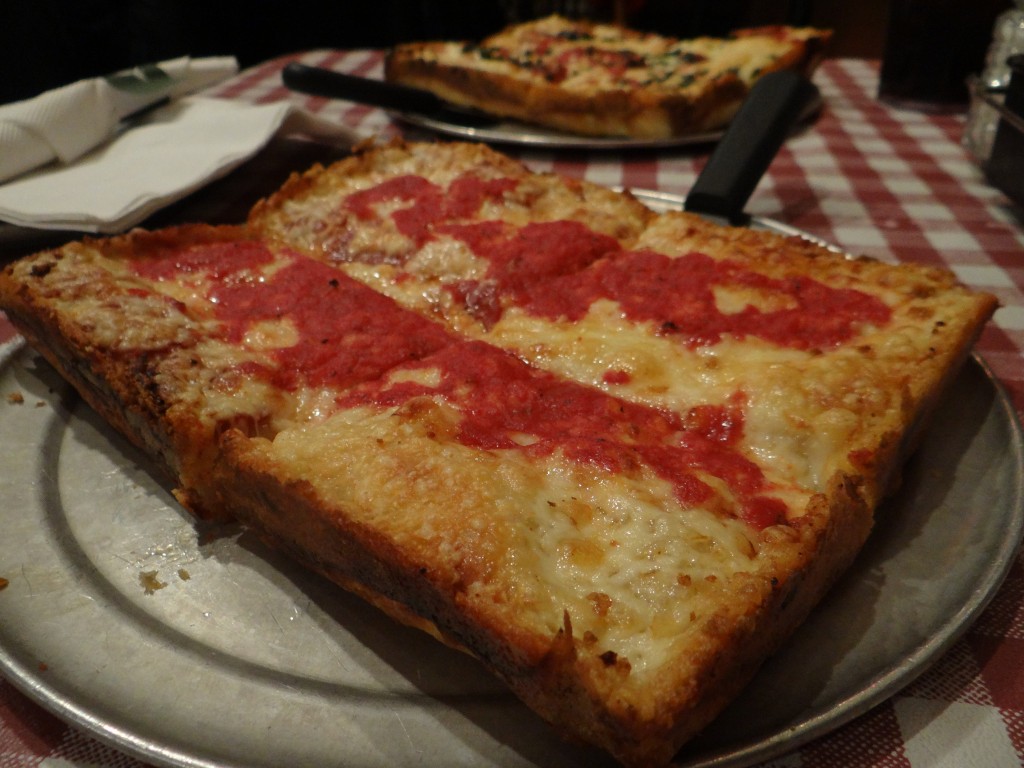 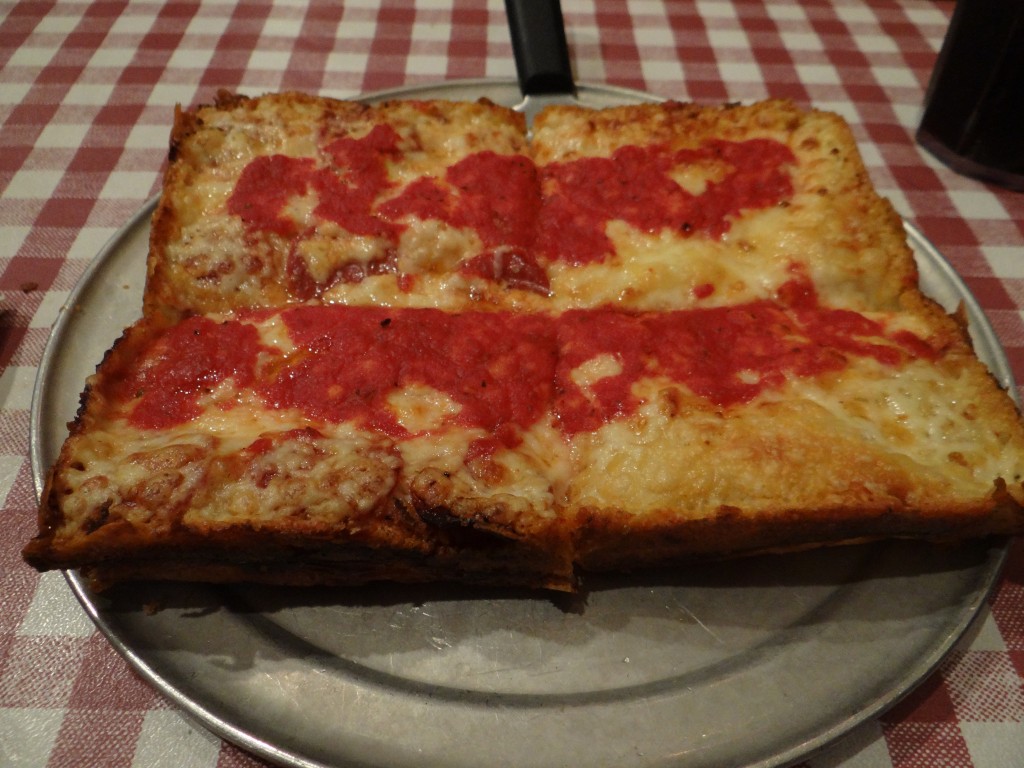 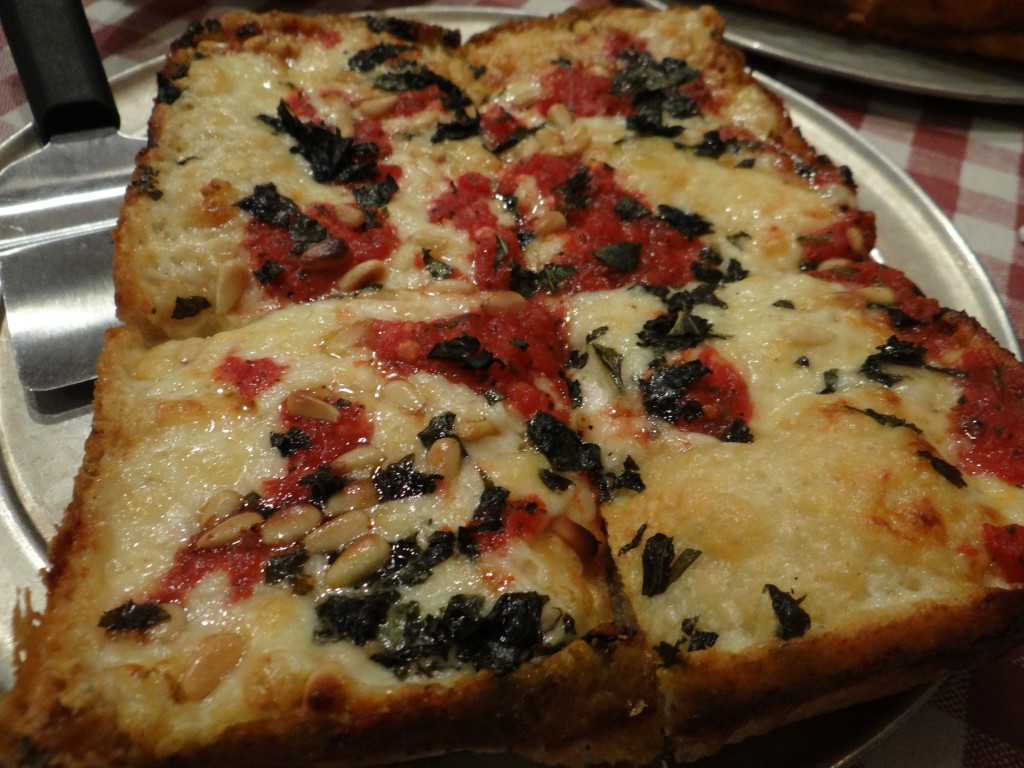 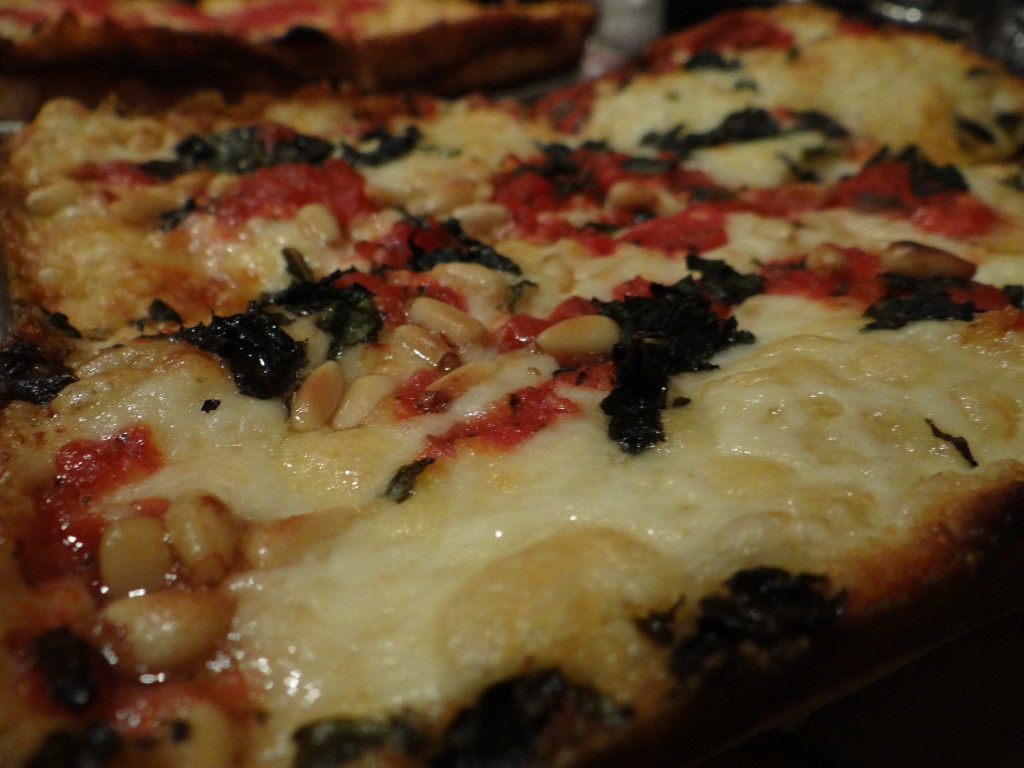 Overall, I really enjoyed the pies at Buddy’s. The “Zoo” pie, despite not having any pesto, reminded me of a pesto pie. I guess it was the pine nuts that caused that to happen. And the regular cheese pie seems simple, but there are so many tastes and textures going on in each bite — from the thick and crispy crunch to the juicy cheese blend featuring Brick, Fontinella, and Parmesan.

So is Detroit-style pizza my all time favorite style? Probably not. But I appreciate it for what it is. And the original Buddy’s is certainly worth a visit. Over the next few years, I’ll closely be monitoring the proliferation of Detroit-style pizza in the US. Whether or not it can ever do for Detroit what deep dish has done for Chicago is yet to be seen.

Previous: The Top 5 Pizzas Of 2014 (That I Ate!)
Next: Loui’s Pizza: Detroit Style Pies Fall Short