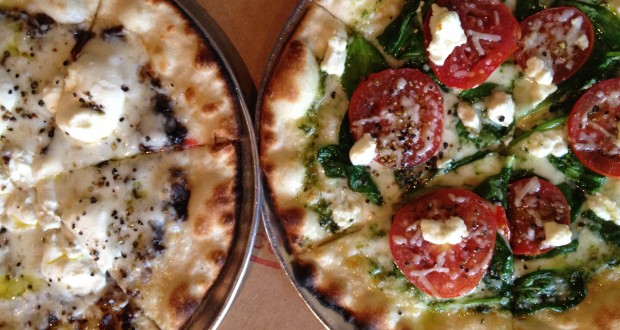 Baltimore isn’t known for its pizza scene, but there is one place I’ve had on my pizza shortlist for the past couple of years: Iggies (818 North Calvert Street) in the Mount Vernon neighborhood. I’d once tried to go there around Independence Day weekend in 2010, but they were closed and I ended up at …

Summary : The toppings are creative and the pies exceeded expectations. This is a true neighborhood joint. Everything is fresh and seasonal.

Baltimore isn’t known for its pizza scene, but there is one place I’ve had on my pizza shortlist for the past couple of years: Iggies (818 North Calvert Street) in the Mount Vernon neighborhood. I’d once tried to go there around Independence Day weekend in 2010, but they were closed and I ended up at Joe Squared.

But last month I was down in Baltimore for the Orioles first playoff game in 15 years, and figured a quick pre-game bite at Iggies was necessary. We went at an off time — 4PM on a Saturday afternoon — but there were still a few locals grabbing some pizza. The place seats around 50 people, but all orders are placed at a counter and picked up when ready. You can tell from the moment you walk in that Iggies does things a bit differently. They are an eco-friendly, social conscious pizzeria which is incorporated into their mission: Pizza With A Purpose. For example, since there is no waitstaff, in lieu of accepting tips  they select a different charity each month and donate any gratuities to them. 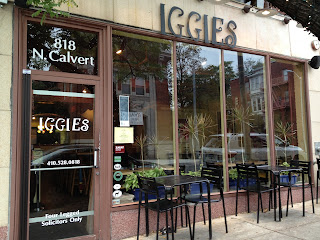 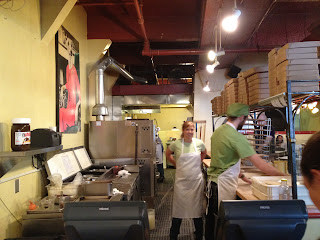 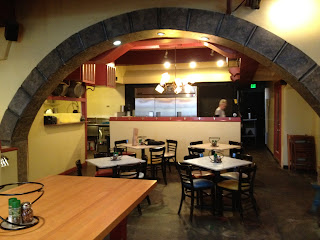 Their menu features about a dozen pies which come in both small and large sizes. The small pies are almost too small to fill up one person, although they offer a nice option for trying multiple pies. If you’re going for substance, a large pie is the way to go — easily eaten by two people and possibly one hungry individual. Since this was my first time there, my girlfriend and I decided to order two small pies: Cipollo without pancetta (red onion confit, mozzarella, and ricotta) and Alice (basil pesto, mozzarella, fresh tomato, garlic spinach, goat cheese, parm). 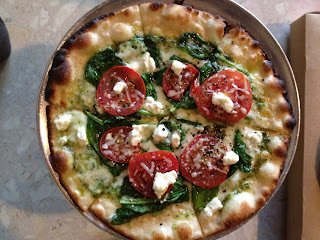 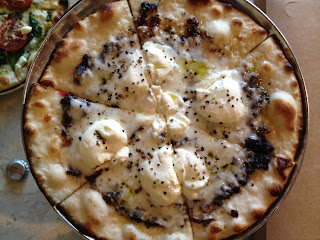 Both were surprisingly tasty, if not filling. The crust, which looks burnt around the edges is actually soft and pretty chewy. I was expecting it to taste more like a cracker. The ingredients, as advertised, were fresh and rationed well. I was particularly intrigued by the red onion confit which was delicious. In fact, their toppings on many pies are a bit out of the ordinary, but not so much so that you’d say: they put that on pizza?! For example: tomato ragu, cumin, and roasted duck all make their ways on (separate) pies. You don’t normally see such ingredients on pizza, but they each make sense.

There isn’t much I’d change about Iggies. It would be nice to have someone bring you your pies when they come out, so you don’t have to stand around and wait for your name to be called. I also might make their small pies just a little bit larger (one inch in circumference) so you feel like you’re getting more for your $10.00; the incremental costs would be minimal. But these are small tweaks to what was a pleasant pizza outing in Baltimore.

Previous: A Pizzeria… On A Boat… On Land… In Page, Arizona
Next: Scenes From My Kitchen