Pulino’s: Lighting Up The Bowery

PLEASE NOTE THAT THIS ESTABLISHMENT IS PERMANENTLY CLOSED
I often write about how over hyped new pizza places are. After all, it’s just pizza. But the opening of Pulino’s took pizza coverage to a whole new level. Eater was the biggest culprit, publishing no fewer than a dozen Pulino’s related postings before the place even opened. Most were not what I’d call newsworthy (Huge Signage Goes UP as Pulino’s Creeps Closer To Opening), while others were just straight up ridiculous (The Epic Pulino’s Bathroom Reveal You’ve All Been Waiting For). Needless to say, Pulino’s opened to much fanfare. 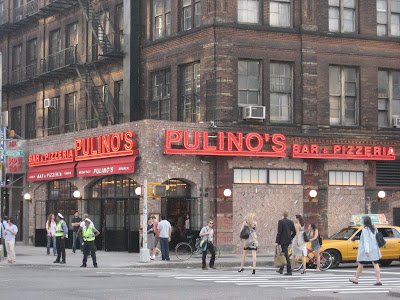 I suppose that comes with the territory when Keith McNally – one of the city’s leading restaurateurs – joins forces with Nate Appleman – last year’s award winner for the James Beard Foundation’s Rising Star Chef. The restaurant has only been open for a few weeks and while I haven’t heard much about the food, nearly every day I read about celebrity sightings there. In fact, as we were leaving, Lorne Michaels was sitting down to dinner. Heck, there have even been sightings of a bouncer there (At Pulino’s, A Security Guard For Pizza).

I decided that the best way to review the place would be to try every single pizza on the menu. So I summoned Pizza Club members to work through the menu with me. But first I had to secure a reservation for 12 which was no small feat. I had to sign a contract which had a number of standard stipulations such as:

The reservation will be held for 15 minutes only. The entire party must be present within this 15-minute period…. A fee of $20.00 per person will be charged to your credit card only if this cancellation policy is not adhered to.

When I arrived at 6:30PM on a Thursday evening, the place was packed. A walk-in for two people was a 45 minute wait and crowds were spilling out the front entrance onto the Bowery. The nicest thing about the restaurant’s layout is the floor to ceiling panels which open up onto the street. It was in the 70s on this particular evening and once the sun set, the restaurant literally illuminated the entire surrounding area. This set up takes the notion of “to see and be seen” to an all new level. 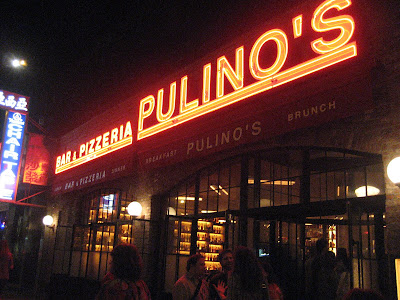 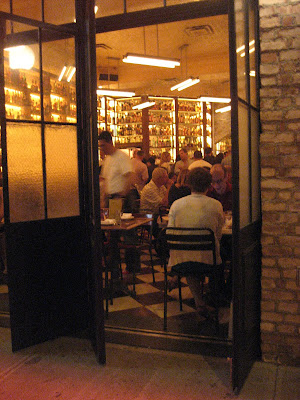 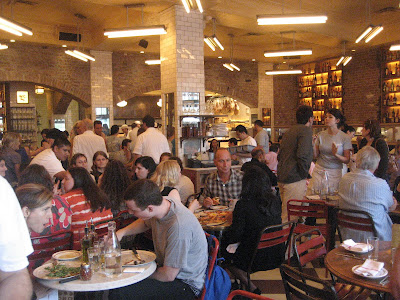 As you can see above, there is really no rhyme or reason to how the restaurant is laid out. There are some booths on the side, but other than that it feels as if tables are randomly thrown together. Waiters and waitresses strategically weave themselves in and out of the pathways, as pizzas are rushed out of the kitchen, where up to a dozen staff can be seen cooking away, including Appleman. 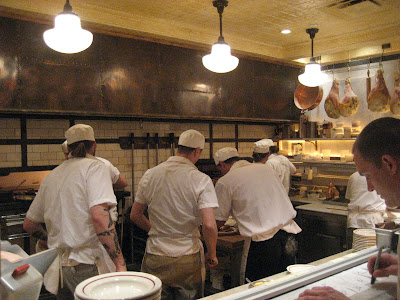 Some notes about the pizza itself:The pizza is not particularly filling. We tried all 12 of the pies on the menu except for the Bianca (“it just tastes like bread,” our waitress told us). We also tried a Bianca Tradizionale without pork strutto and a Salsiccia pie without sausage, meaning that the 12 of us tried a total of 13 pies. We had absolutely no problem finishing them. So although the pies look sizable, they are really thin. Any of the pies on the menu can be finished by a one person.

Few vegetarian options. Pulino’s is not vegetarian friendly, as only four of the 12 pies on the menu lack meat (one of those is the “Bianca”). All of the pies can be made without a particular topping, but they won’t do half and half (for example, you can’t get a funghi pie with pancetta on only half of it). There are some pies that make sense to order without meat — like the funghi — but others would be completely altered without their meat topping.

The pizza is sliced oddly. When I first saw the way in which Pulino’s pizzas were sliced I thought it was pretty cool. Two parallel cuts one way and two parallel cuts the other way yield nine slices. But when it came time to eat the pizza, I realized that this was possibly the worst way to slice a pie (hence why other places don’t slice their pies like this). Each slice was square-ish and held together well, but there is only one slice in each pie that contains no crust and that was the slice everyone fought over. Especially given the uneven distribution of toppings, there was little consistency among slices. Take the pizza below, for example. Which of the nine slices would you go for? 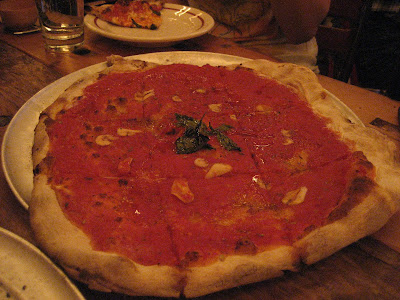 Another example of the uneven topping distribution can be seen in the Salsiccia pie below (tomato, mozzarella, broccoli rabe, chiles & pecorino with no sausage). There are a couple of slices that don’t contain any toppings. 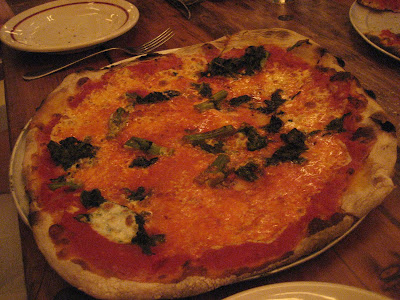 My favorite pie was the Margherita, followed by the Salsiccia (without sausage), and Quattro Formaggi. General consensus was also that the Bianca Tradizionale pie tasted better without the pork strutto (although the crust of the one with pork strutto was partially burnt). The Salame Piccante and Salsiccia had the most kick to them — the latter contained flavorful chiles. Our group wasn’t thrilled with the sauce meaning that the Marinara and Gamberi left something to be desired.

The pies range from $13 – $19 (other than the $8 Bianca) and five of them are $18 or $19. Including tax and tip, you’re spending about $25 for most pies which is a little pricey for what you’re getting. Certainly, they’re still working out kinks and I’m hopeful that things will improve over time.

But a hot spot is a hot spot and I have no doubt that Pulino’s will be packed on a nightly basis for years to come. There are better pizza places within a few blocks, but how can you not check out Pulino’s… if only to see what the hype is all about.

Below you’ll find photos and a description of every pizza on the menu: 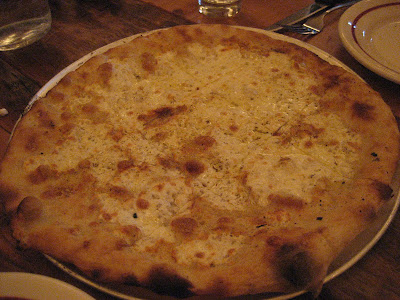 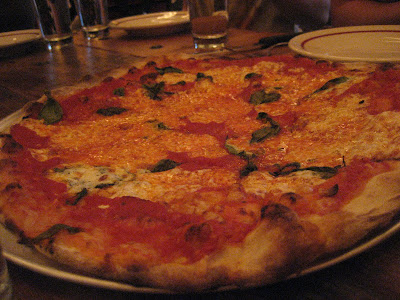 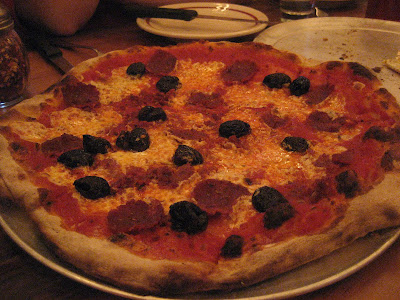 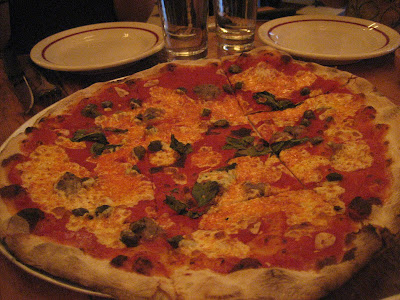 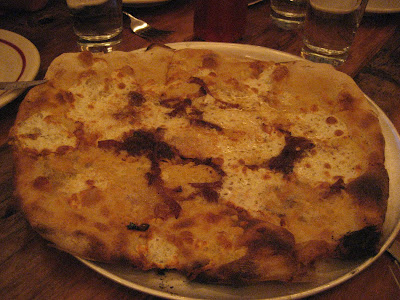 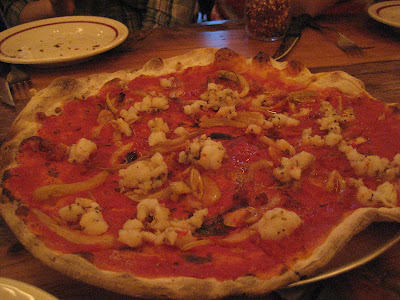 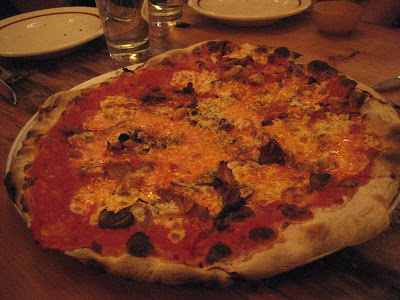 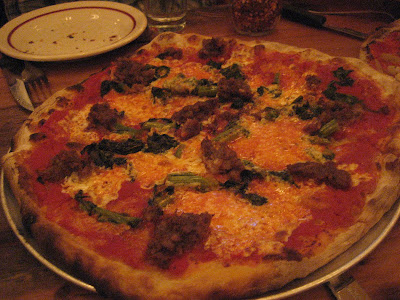 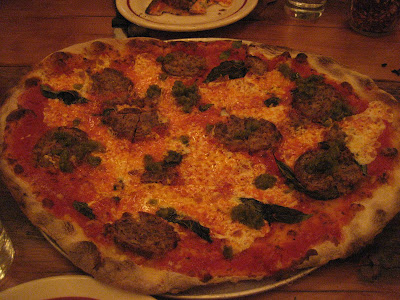 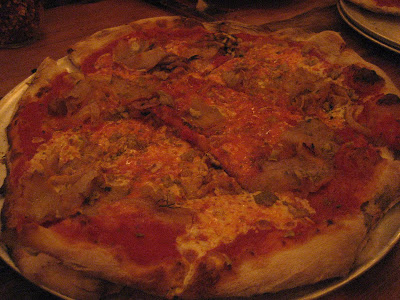