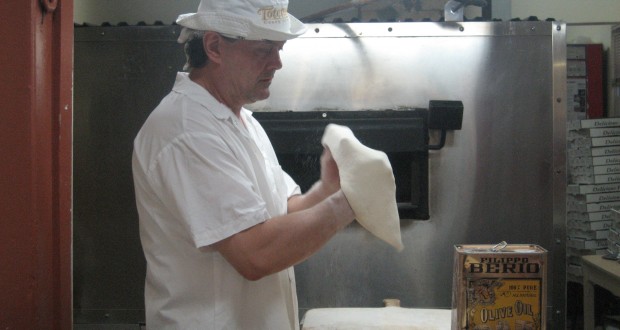 Back in March 2009, a devastating fire forced Totonno’s – a legendary Coney Island pizza place – to close indefinitely (Fire Shuts Totonno’s). Weeks passed and false reports of a reopening date surfaced from time to time. Finally, nearly a year after the fire, Totonno’s was back in business. The only problem? It was the …

Summary : A trip to this legendary Coney Island pizza place was disappointing.

Back in March 2009, a devastating fire forced Totonno’s – a legendary Coney Island pizza place – to close indefinitely (Fire Shuts Totonno’s). Weeks passed and false reports of a reopening date surfaced from time to time. Finally, nearly a year after the fire, Totonno’s was back in business. The only problem? It was the middle of winter in New York City — not exactly a prime time to be visiting Coney Island. Nevertheless, loyal customers returned right away and when the cold weather was gone, the place was packed once again — as if it had never even closed.

Sadly, I never made it to the original Totonno’s. From what I hear, not much has changed. Ever since I started Pizza Club in 2008, I’d been looking forward to organizing an outing there. And last month, it was finally time to make the trip. I was worried, though, that I wouldn’t be able to form an objective opinion about the pizza there. For years now, I’ve been hearing about how amazing the pizza is at Totonno’s. Nearly every pizza enthusiast I meet lists it as one of their favorite places. Even before I set foot inside, I already had unrealistically high expectations for what I’d find behind those glass doors. 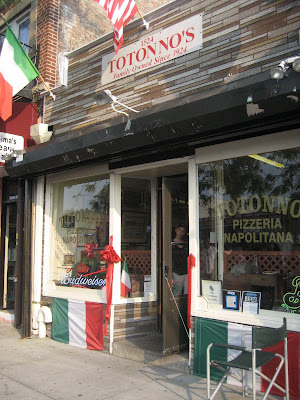 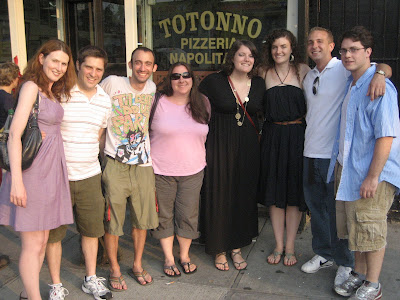 The place itself feels like it’s been around for decades. The walls are adorned with photos and plaques of awards and reviews. About 35-40 people can comfortably fit inside — most at tables, some in booths. The way Totonno’s is arranged makes it difficult to accommodate large parties. Had our group been larger than seven people, I fear we would have encountered a problem. When the place is full, as it was on a Friday evening around 7PM, a disorderly line forms outside. When a table opens up, the place’s no-nonsense owner, Louise Ciminieri, steps outside to let in the next party. 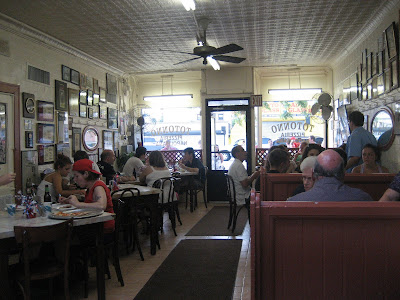 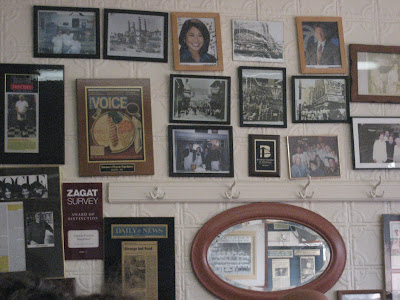 The pizza itself was underwhelming. It was good. Solid. Enjoyable. Tasty. But it wasn’t all I hoped and dreamed it would be. We ordered three pies – one plain, one with sausage, and one with mushrooms and peppers. Our group seemed to agree the the toppings only took away from the key ingredients. The plain pie was the best. 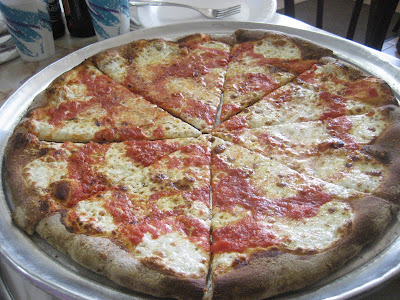 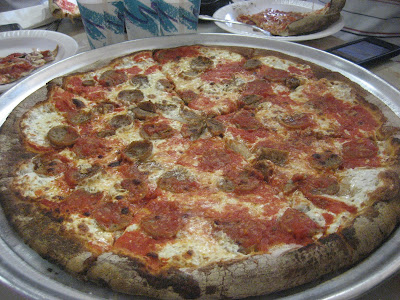 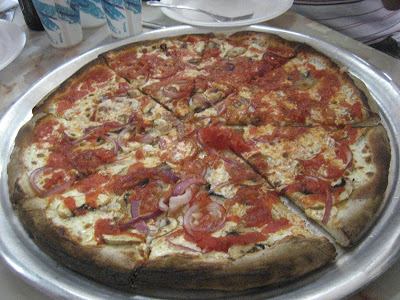 At $19.50 for a large pie, it seems in line with other classic Brooklyn pizza places. A large pie at Grimaldi’s is $14.00, but at Di Fara you’ll have to shell out $25.00. Totonno’s, however, is a far cry from Di Fara. I was disappointed there was no basil on the plain pie and the crust was crunchier than I like. Some of the pies were lukewarm when they arrived. I love when a pie is placed in front of you… still steaming from the oven.

I’m sure I’ll return to Totonno’s very soon and perhaps my opinion about it will change. When a pizza place involves a bit of a trek to get to, I ask myself this: Would I send a friend from out of town there for some pizza? The answer is a resounding no. Other Brooklyn pizza places I might send them to include Di Fara, Grimaldi’s, Paulie Gee’s, Motorino and Roberta’s. I’m perhaps ashamed to say that I even enjoyed a place like Toby’s Public House more than Totonno’s. I appreciate the history and it’s somewhere every New Yorker should visit. I just don’t appreciate the pizza as much as I do elsewhere. Had I gone with lower expectations, perhaps I would have been pleasantly surprised. But when you’re expecting greatness, it’s easy to be disappointed. 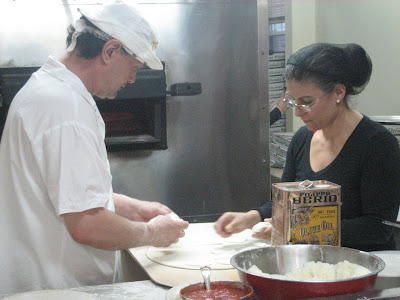