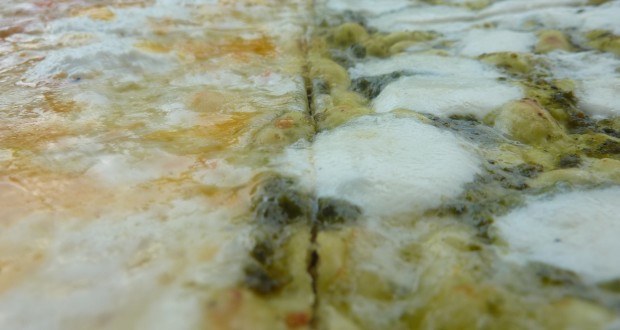 This summer, I was driving from New York to Maryland and decided to stop in Baltimore for some pizza on the way. Although I grew up 45 minutes south of Baltimore in Potomac, Maryland — I’ve limited my regional pizza reviews to the Washington, DC area until now (see: Guiseppi’s Pizza, RedRocks, Ledo Pizza, Pizza …

Summary : This neighborhood spot cranks out super thin bar-style pies. Although they won't change your life, when paired with a beer and some live music you can't really go wrong.

This summer, I was driving from New York to Maryland and decided to stop in Baltimore for some pizza on the way. Although I grew up 45 minutes south of Baltimore in Potomac, Maryland — I’ve limited my regional pizza reviews to the Washington, DC area until now (see: Guiseppi’s Pizza, RedRocks, Ledo Pizza, Pizza Paradiso, Pizzeria Orso, and We, The Pizza). Needless to say, this site was due for a Baltimore review.

After doing some research (Pizzablogger, by the way, is the Baltimore pizza expert around these interwebs), I decided to hit up Pizza John’s (technically in Essex, Maryland). It had gotten very favorable reviews and it’s only accessible with a car. Perfect.

When I arrived at Pizza John’s, however, there was a note on the door that they’d be closed the entire week following the July 4th holiday. I had to think on my feet and came up with a backup plan — I’d drive to downtown Baltimore and hit up Iggie’s which I’ve read a lot about. Believe it or not, when I arrived at Iggie’s, I found out that they were also closed for the week. Go figure.

Next up: Joe Squared (133 West North Avenue). I called ahead to make sure they were open. It’s just a five minute drive from Iggie’s, so any Baltimore pizza adventure could easily include both. The best part about Joe Squared isn’t the pizza, but the space itself. Technically it’s a bar, but they have a patio out front — surrounded by plants — and a performance space inside. It’s the kind of local, neighborhood joint you’d expect to find in Baltimore. It’s not dingy, but the first thing you see when you walk in are flyers and posters promoting upcoming shows. It’s rare in New York to see a hybrid pizza space — that is, a location know for serving great pizza but also for something else (i.e. putting on art shows, hosting live bands). 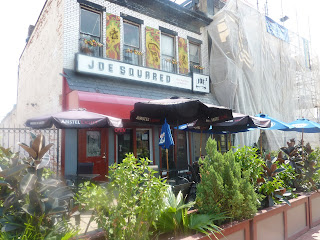 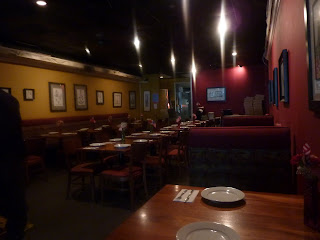 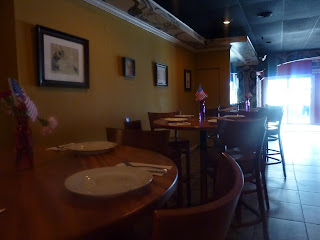 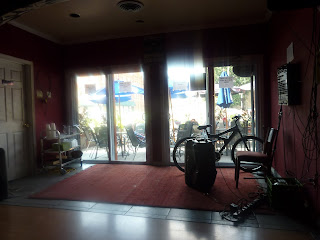 After taking in the space, things went downhill. It’s not that the pizza was bad. It was tasty… edible… unique… but it tasted like matzah pizza. Really good matzah pizza. But I couldn’t get over the matzah-like crust. It was a different kind of bar pie than I’d ever seen before.

As I was dining alone, I opted for the Flag Pizza — it’s split in thirds with a variety of sauces:

In other words — three pies for the price of one! Although the pies here aren’t cheap. The flag pizza could be ordered in four sizes at the following price points: $15 / $17 / $20 / $23. I ordered the $17 pie which you can see below. It was so thin, I was still hungry after devouring it. 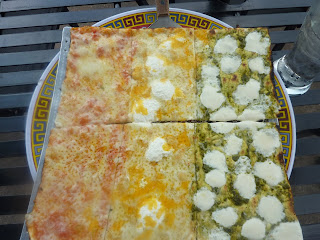 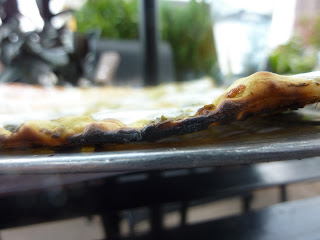 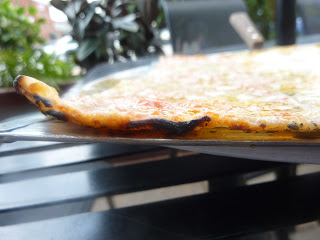 I really like the idea of combining three pies into one. The section with the red sauce was actually my favorite. The white sauce suffered from poor quality ricotta and cheddar cheeses (not a great combo to start with), and the pesto section was bland. Maybe it could have used a topping like mushrooms.

I rarely comment on how menus are laid out, but Joe Squared has it right. On one page are suggested pies — meat pies on the left and veggy pies on the right. I can’t believe more NYC restaurants don’t do this. I frequently dine with vegetarians and this makes it easy for them. It eliminates half the pies without them having to take out their iPhones to Google whether pancetta is a meat or cheese.

There are ten meat pies and nine veggie pies on the menu at Joe Sqaured. It’s worth noting that you can create your own pies too. There is a page dedicated to building your pie — one topping at a time — and it’s also laid out well. Start out with a cheese, add some meat, then some veggies, some seafood, and even some pasta (okay, maybe that’s too much).

When it’s all said and done, Joe Squared is a great place to sit outside and have a beer. Heck, if you want, nibble on some pizza. It won’t change your life. But it’s also a lot better than you can probably do elsewhere. Catch some live music. Chat it up with folks at the bar. Watch a Ravens or Orioles game. This place is what Baltimore is all about. I wish there was a place like this in New York City — serving traditional New York slices. The closest thing we have here is Crocodile Lounge. Go figure.

Previous: Tips From Me On PizzaTV.com
Next: Ken’s Artisan Pizza: A "Must-Visit" Stop In Portland, Oregon