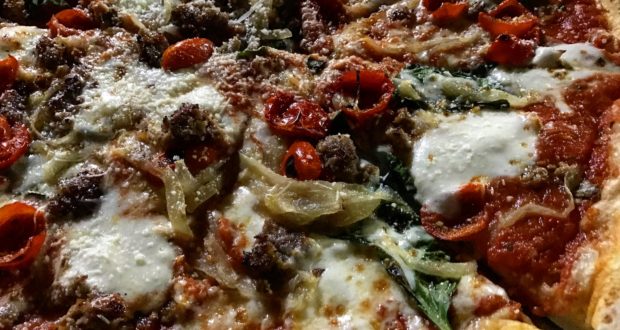 In 1996, when I was 12 years old, my family went to the Olympics in Atlanta. Although I’ve crisscrossed the United States dozens of times since then, I hadn’t been back to Atlanta since then… until earlier this year. My memories of Izzy (what, you don’t remember the famed Olympic mascot?), pin trading (an essential …

In 1996, when I was 12 years old, my family went to the Olympics in Atlanta. Although I’ve crisscrossed the United States dozens of times since then, I hadn’t been back to Atlanta since then… until earlier this year.

My memories of Izzy (what, you don’t remember the famed Olympic mascot?), pin trading (an essential Olympic pastime) and Richard Jewell (did you know he’s been dead for more than a decade?) have long since faded away. So I was excited to return to Atlanta 21 years later to make some new memories.

Moments after landing at the airport, I immediately set out to try some pizza. Ammazza (591-A Edgewood Ave SE), a Neapolitan style spot in the Edgewood neighborhood had garnered solid reviews online and strong accolades from some friends. So that’s where I decided to kick off my trip. 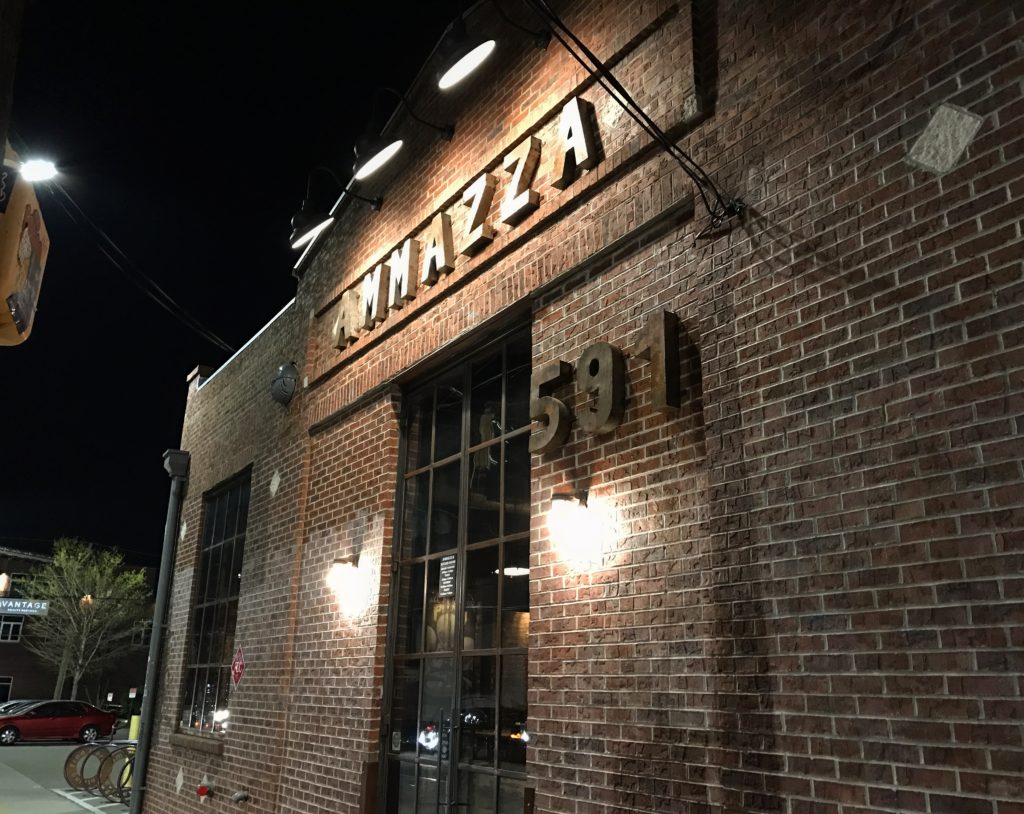 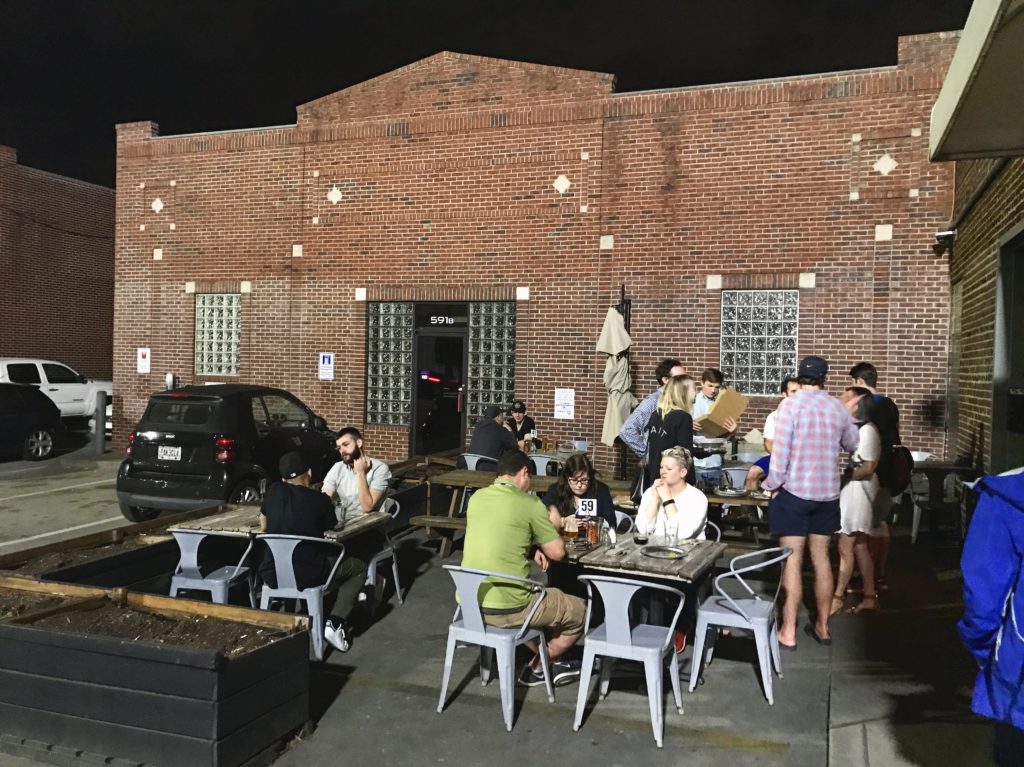 I didn’t arrive at the restaurant until after 10PM on a Wednesday evening. Restaurants in Atlanta close much earlier than in New York and I was happy that Ammazza churns out pies until 11PM during the week and midnight on the weekends.

The restaurant is located inside of a renovated warehouse in the hip, food-centric Edgewood neighborhood. There are two wood-fired ovens, visible through a glass wall. The main dining room features a huge communal table in the center (actually a series of tables put together, but add them up and you might just have the longest communal table in the country — it’s that big!) surrounded by booths on one side and tables on the other. There is also an outdoor area, which features seating for an additional 30 guests. Oh, and a bar too. A beautiful bar. So in other words, there are a plenty of places to enjoy your pies — whether you are flying solo, on a date, or out with the family. 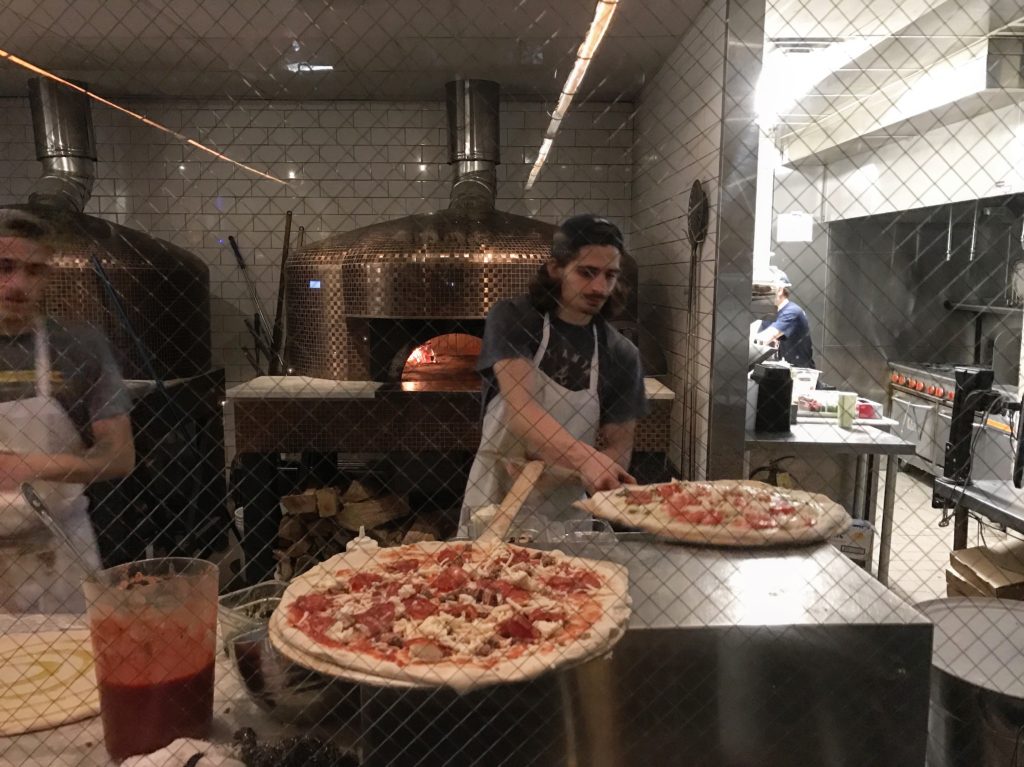 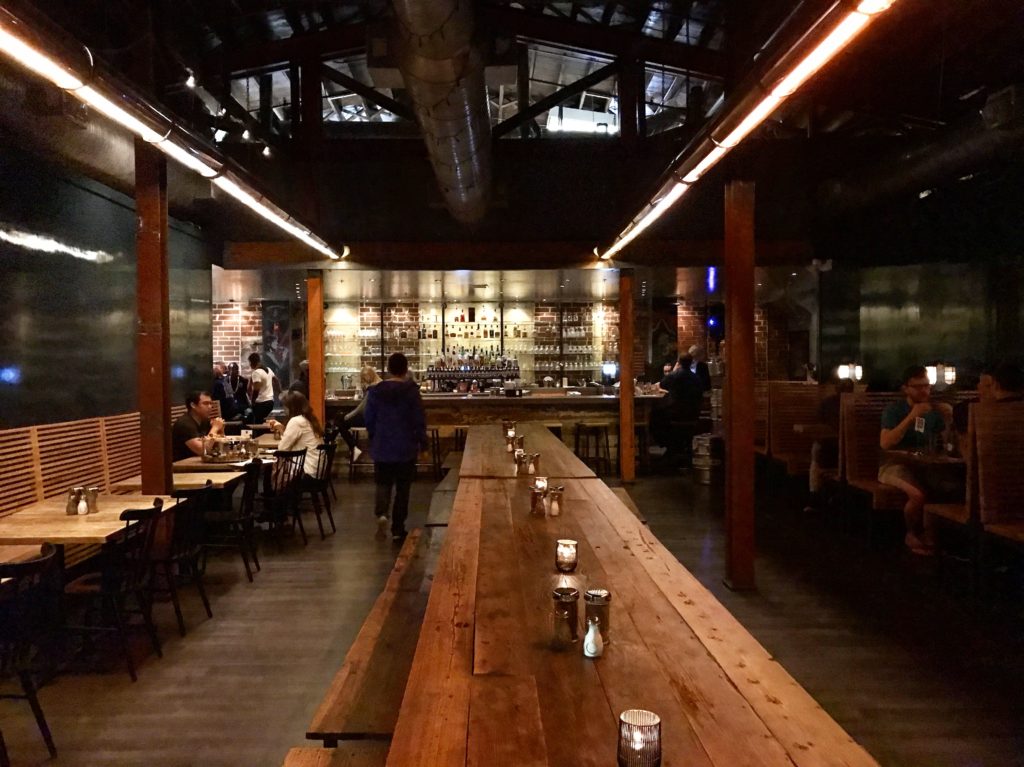 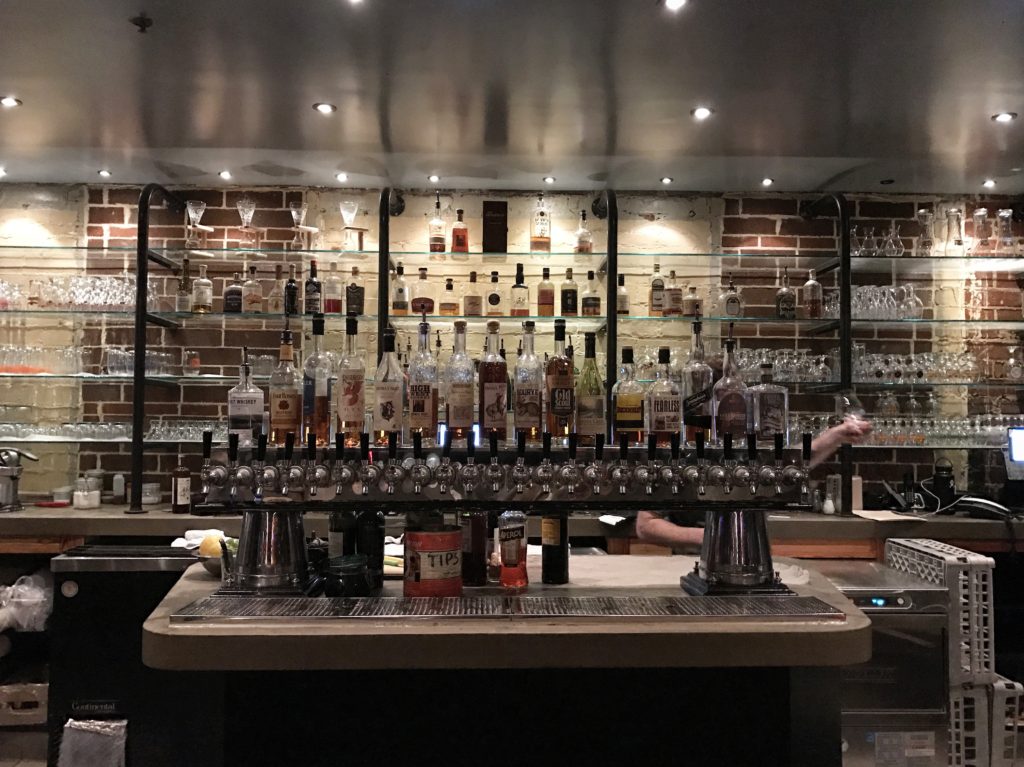 My friends and I opted to sit outside. We sat down a table, waited a few minutes, and then it occurred to us that there might not be table service at the restaurant. After inquiring inside with the bartender, we learned that you are supposed to place orders at a counter near the entrance, down the hall from the dining room. But… if you’re dining at the bar, you can place your orders with the bartender. Since it was late, and mostly empty, the bartender accepted our pizza order along with our drink order. But the whole ordering system is slightly confusing.

The menu boasts 16 pies plus some other notable items including pizza fritti — fried pies — and a “glitter” pizza for kids featuring edible glitter. A little kitschy, but whatever brings in more business, right? It’s only $6, but unfortunately you have be under 12 years old to order it. Too bad this place wasn’t around back in 1996!

All pies come in two sizes — small pies are $13-$16 and large pies are $19-$22. There are a few unusual topping combinations including a chicken pesto pie (basil pesto sauce, spinach, marinated chicken, onions, house mozzarella). That was a little too aggressive for me at 10PM, so I opted for the following two pies: 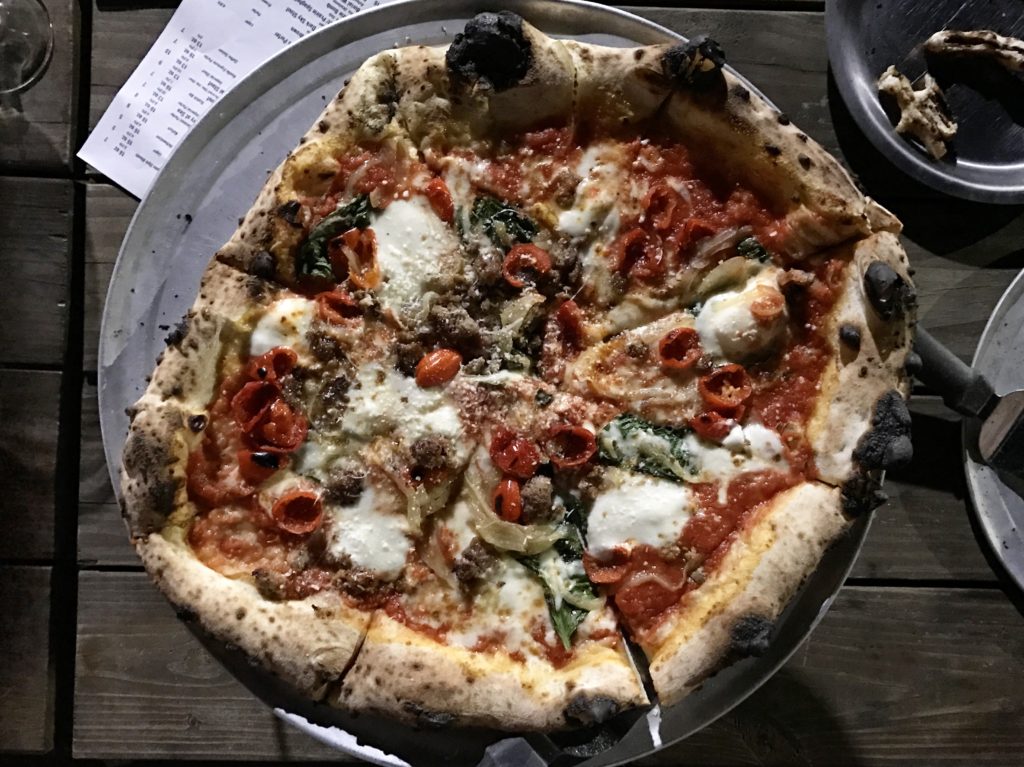 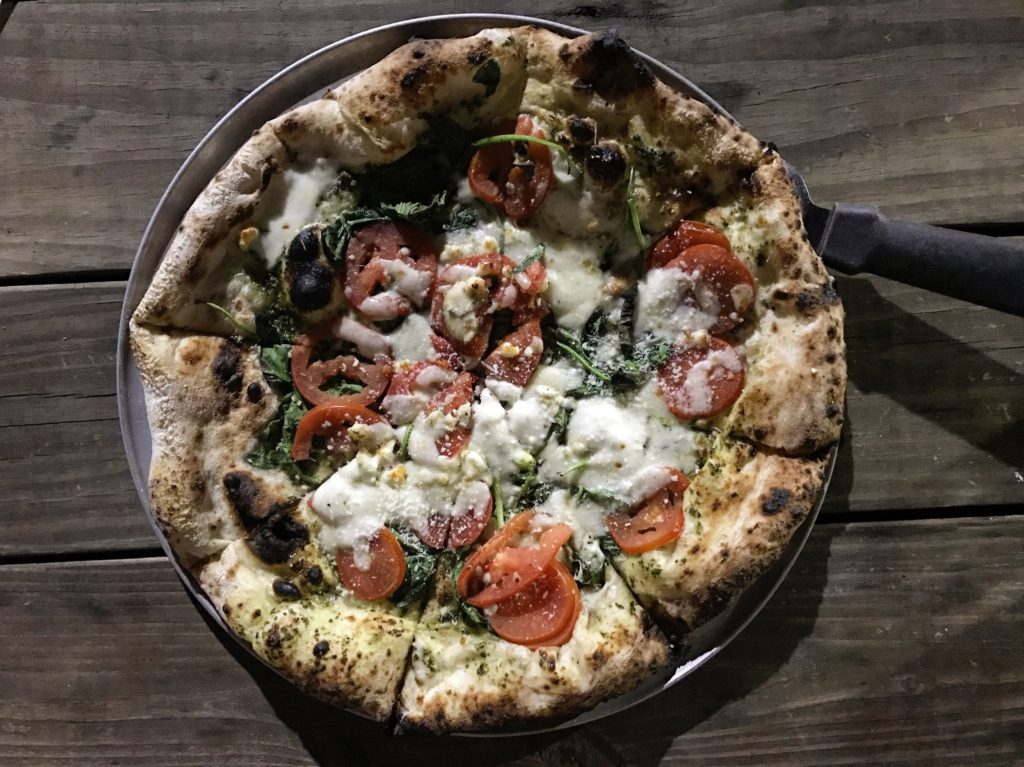 Neither pie was great, although the Pesto Gorgonzola pie was the more disappointing of the two. First off, I could barely taste any pesto — the main ingredient featured in the name of the pie. You could tell that there was a very, very light base of pesto applied to the pie, but it was overshadowed by all of the other ingredients. The crust itself, could not hold any of the ingredients. It was impossible to eat without a knife and fork. Try any other way, and each slice simply collapsed. The ingredients weren’t applied evenly. So some slices had cheese and others didn’t.

After finishing that pie, our second pie hadn’t arrived yet. The restaurant was nearly empty at this point and apparently our ticket had been lost in the kitchen. The staff was very gracious (they even treated us to dessert which was kind), but this was another blip in my experience there.

The Amarena pie was much better than the our first pie. But the crust still suffered from the same issues. And this pie was really cheesy. That’s not something I generally mind, but it was hard to pull apart the slices without string of cheese forming. 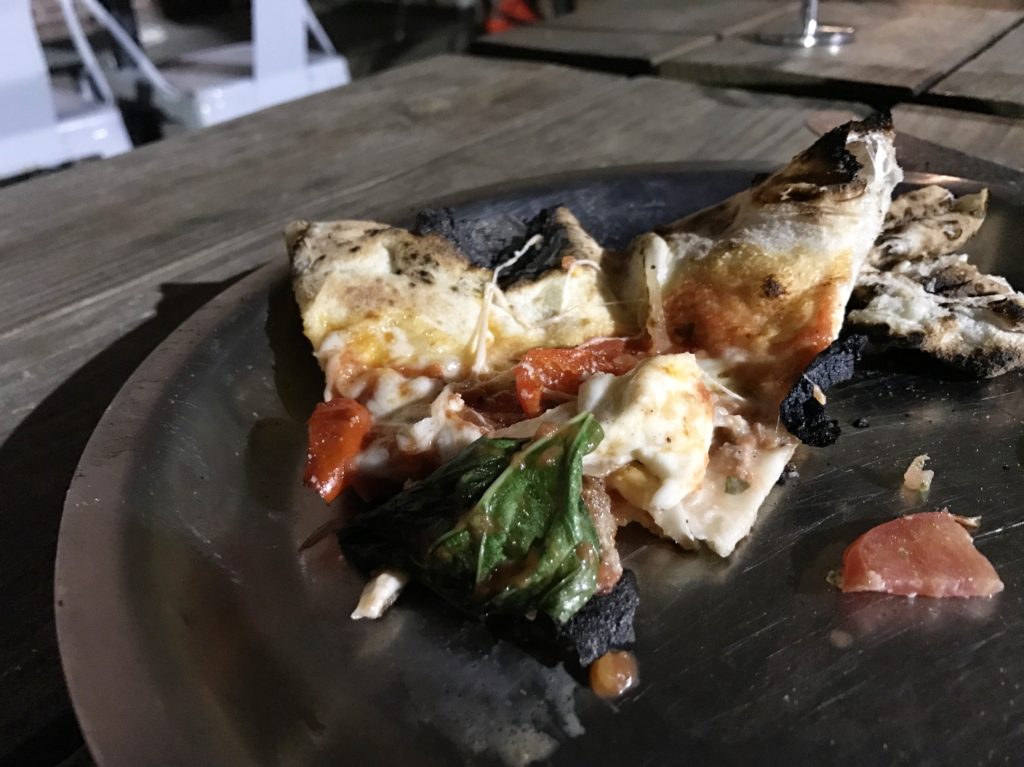 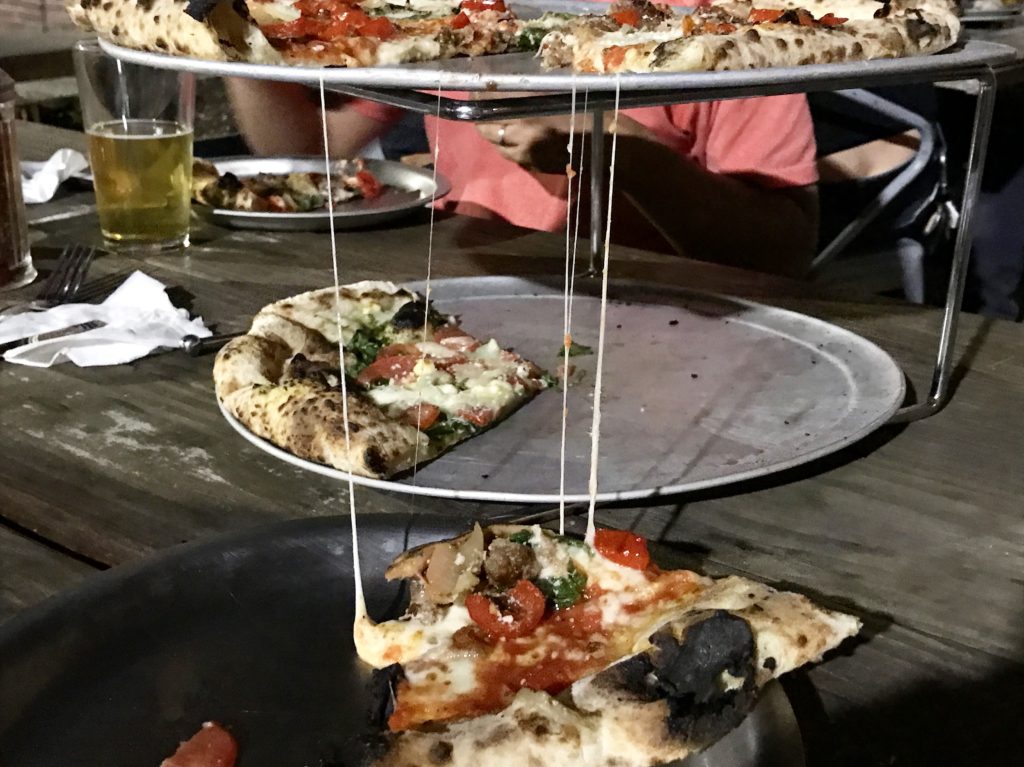 Despite my disappointment with the pizza, there is a lot to like about Ammazza. The space is awesome. There is a really great beer list. They are open late. Our (free) dessert was excellent. But, at the end of the day, Ammazza is a pizza place. And not one that is on the top of my list to return to… when I’m back in Atlanta 21 years from now in 2038.