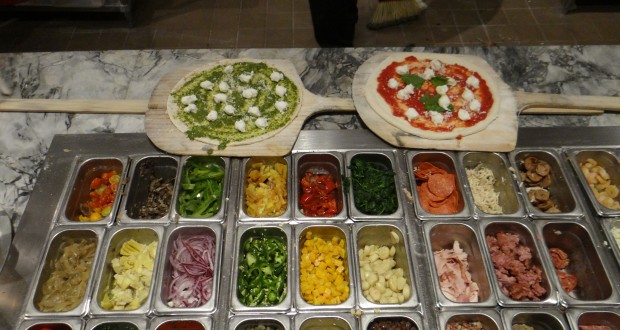 The Chipotle of _______. You can fill in the blank with dozens of foods. Concepts are popping up all over the country that are trying to be the Chipotle of _______. That’s not surprising. Chipotle has established a whole new market of “fast casual” restaurants and business savvy food entrepreneurs see an opportunity to capitalize …

Summary : The pizza at 800 Degrees leaves something to be desired and the execution is poor. The concept has a lot of potential, but needs some tweaks if the mini chain wants to be successful.

The Chipotle of _______. You can fill in the blank with dozens of foods. Concepts are popping up all over the country that are trying to be the Chipotle of _______. That’s not surprising. Chipotle has established a whole new market of “fast casual” restaurants and business savvy food entrepreneurs see an opportunity to capitalize on that. The folks behind 800 Degrees, a California based impersonator of Chipotle (with locations in Nevada and Illinois) that focuses on pizza, is in good company. For starters, Chipotle itself is actually testing out a Chipotle style pizza concept in Colorado called Pizza Locale. And my friends in DC rave about &pizza.

During a recent trip to Los Angeles I decided to check out the 800 Degrees location in Santa Monica (120 Wilshire Boulevard) — my first visit to one of these types of pizza places. I’ll cut to the chase: there was a lot that I liked about 800 Degress conceptually. But the pizza itself wasn’t great. That’s the challenge will all of these places, right? Trying to mass produce a single cuisine consistently and make it taste good. 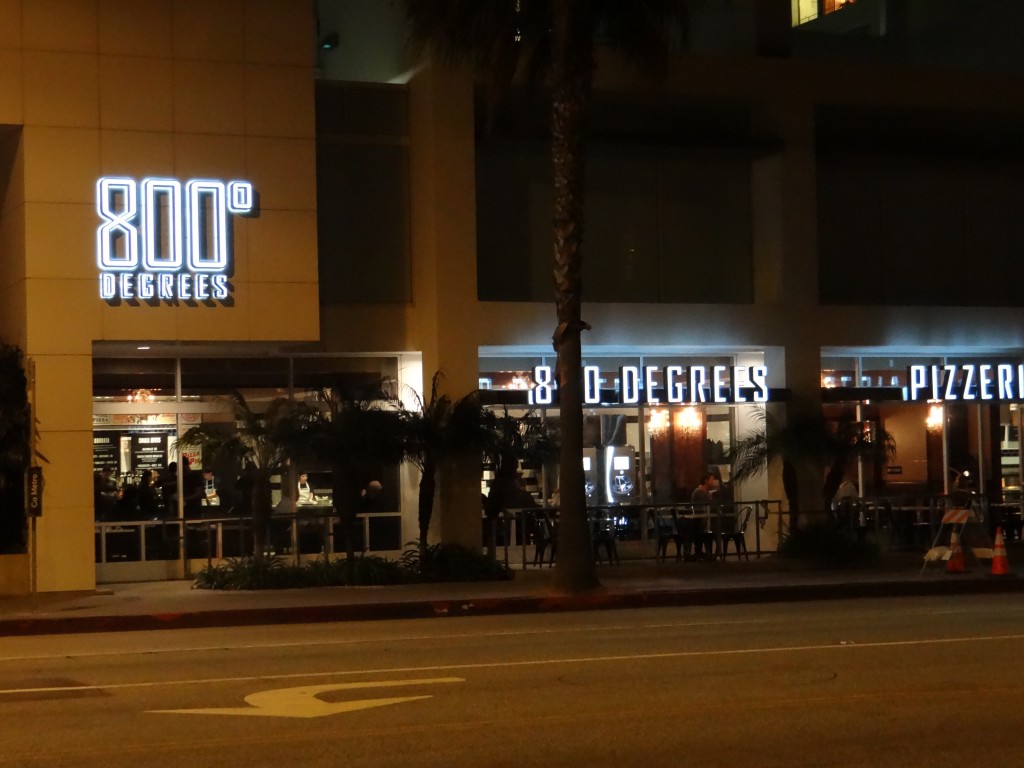 The Santa Monica location of 800 Degrees is quite large. Some 100 diners could probably fit inside with some more outside. I’ve never seen a Chipotle that big. When I stepped inside, I was confused as to what vibe they were going for. There where chandeliers hanging from the ceiling which made me think they were trying to position themselves as a bit more upscale (can you think of a Chipotle that has chandeliers?). But the walls were also decorated with (fake) pizza boxes which screams corner slice joint to me. 800 Degrees is having an identity crisis. 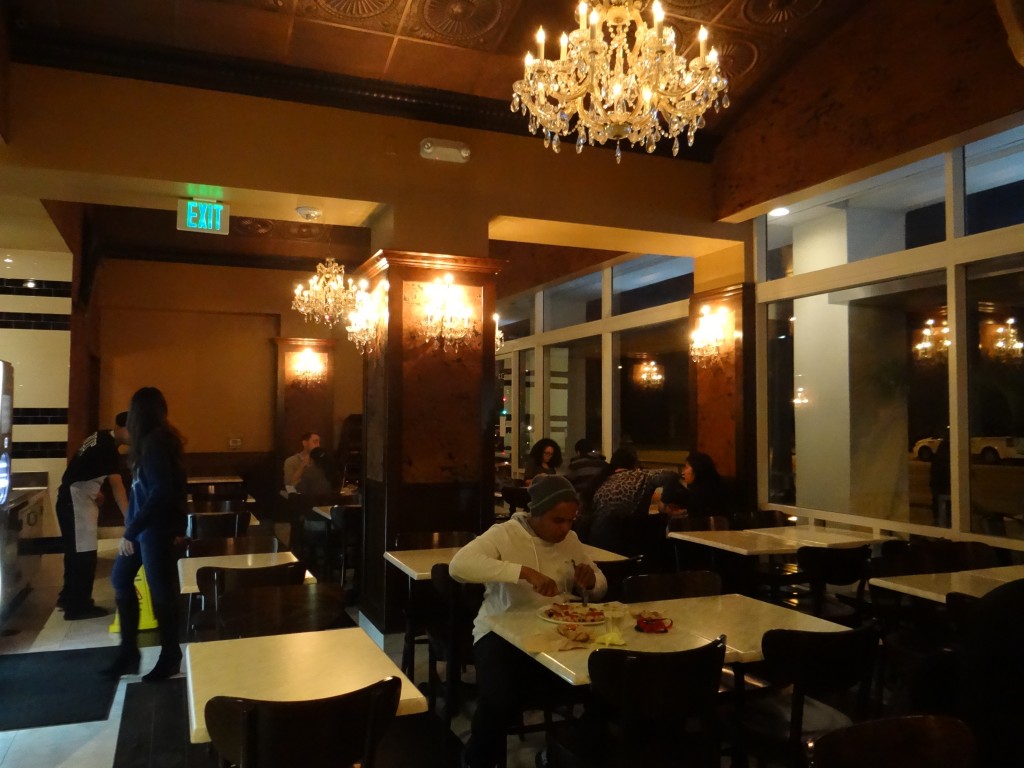 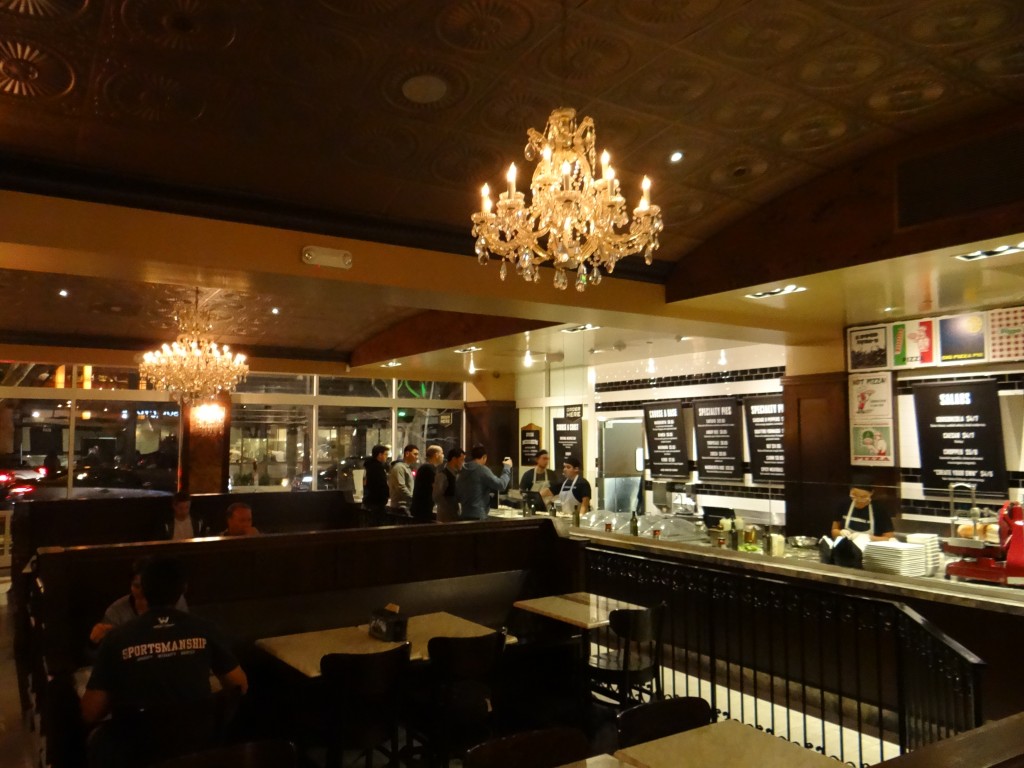 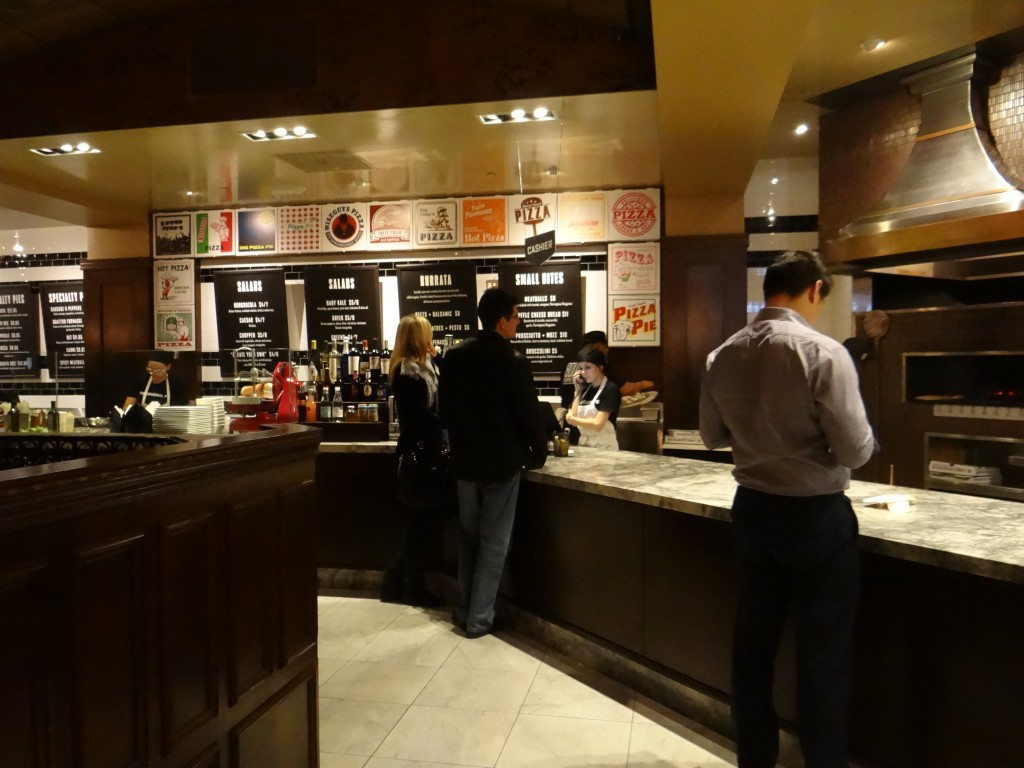 The place was pretty empty around 8PM on a Tuesday evening — albeit a little late for dinner. There wasn’t a line, so I just sort of made my way to the beginning of the “pizza conveyor belt.” The first sign was promoting a special — an Amatriciana pie for $10.55 — but I wanted to go through the process of building my own pie. The next sign prompted me to choose a crust. This makes complete sense — it’s the equivalent of chosing a bowl, tacos, or a burrito at Chipotle. At 800 Degrees the options are a neapolitan crust, crispy crust, or gluten free crust (for $1.50 more). Pizza eaters have very different crust preferences and this is one huge benefit of going to a place like 800 Degrees for dinner.

Oh, your girlfriend has a gluten allergy? No problem! Your boyfriend likes his crust puffy and airy. 800 Degrees to the rescue!

Personally, I’m a Neapolitan pizza fan so that’s what I would have typically gotten. But I also wanted to try the crispy crust for comparative purposes, so I ordered that too. 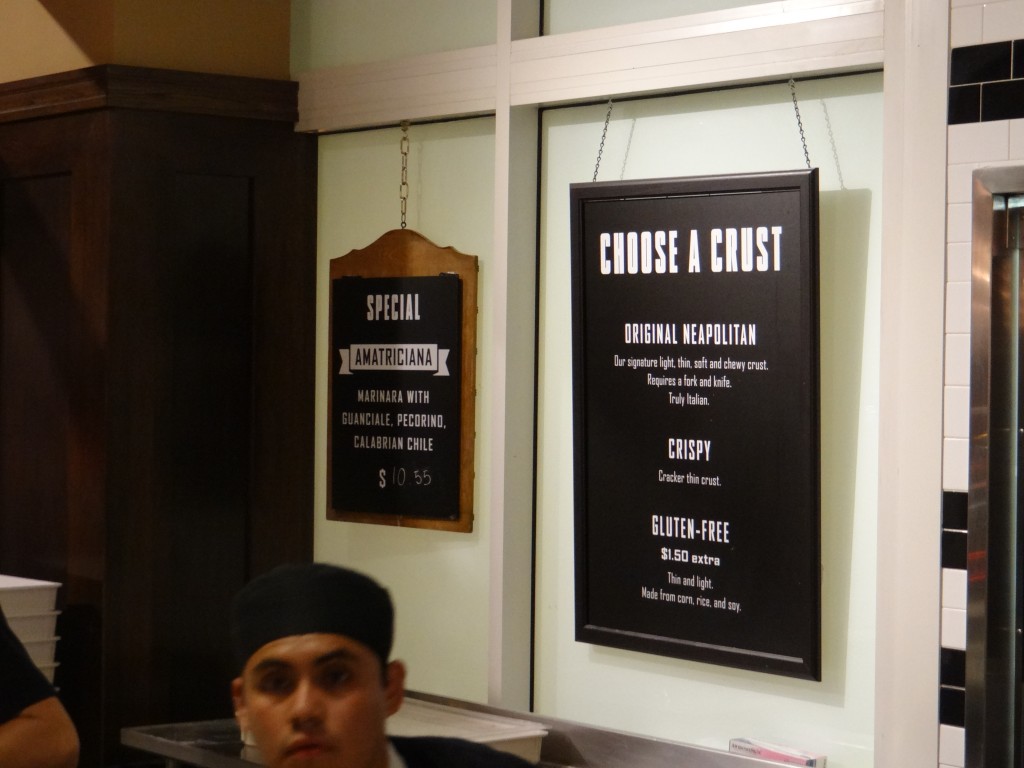 Now — for what to put on my pie. There are essentially two options. You can build you own pie or order one of the restaurant’s Specialty Pies. This makes sense as I write about it, but at 800 Degrees I was a little confused about things. First off — only a few of the Specialty Pies list what base they come with. Let’s take the Tropicale, for example, which features roasted pineapple and rosemary ham (I’m not sure if that’s a typo, and they actually mean rosemary AND ham… but that’s beside the point). So let’s say I want this pie. Do I also select the base I want it with? Or does the pie already come with a preselected base that I’m just not aware of. Especially since there are so many different prices on the menu — I found myself starting to do some calculations. A couple of the pies list the base (the Tartufo, Quattro Formaggi and BLT come with a Bianca base). But what about the Angry Bee? Does that, by default, come with a Margherita base? Or a Marinara?

Another thing — all of the specialty pies are priced differently. There is so much math involved that it’s unclear if you’re getting a price break by ordering a special. Or if 800 Degrees is just being kind enough to do the math for you? Add ons cost $1 at 800 Degrees. Let’s say you order a Sausage & Peppers pie which features sausage, pepperdews, and onions. The pie costs $9.85 — the same price if you were to build it yourself ($6.85 for a Margherita + three $1 toppings). But let’s say your order a Quattro Formaggi pie which features provolone, parm, gorgonzola, and fontina. The pie costs $9.05 — which is actually $1 cheaper than if you were to build it yourself ($6.05 for a Bianca + four $1 cheeses would actually be $10.05).

The purpose of the past two paragraphs is simply to illustrate how confusing it can actually be to place an order at 800 Degrees. Chipotle has mastered the art of simplification. And 800 Degrees seems to have really complicated things in trying to offer diners the opportunity to customize their meals. 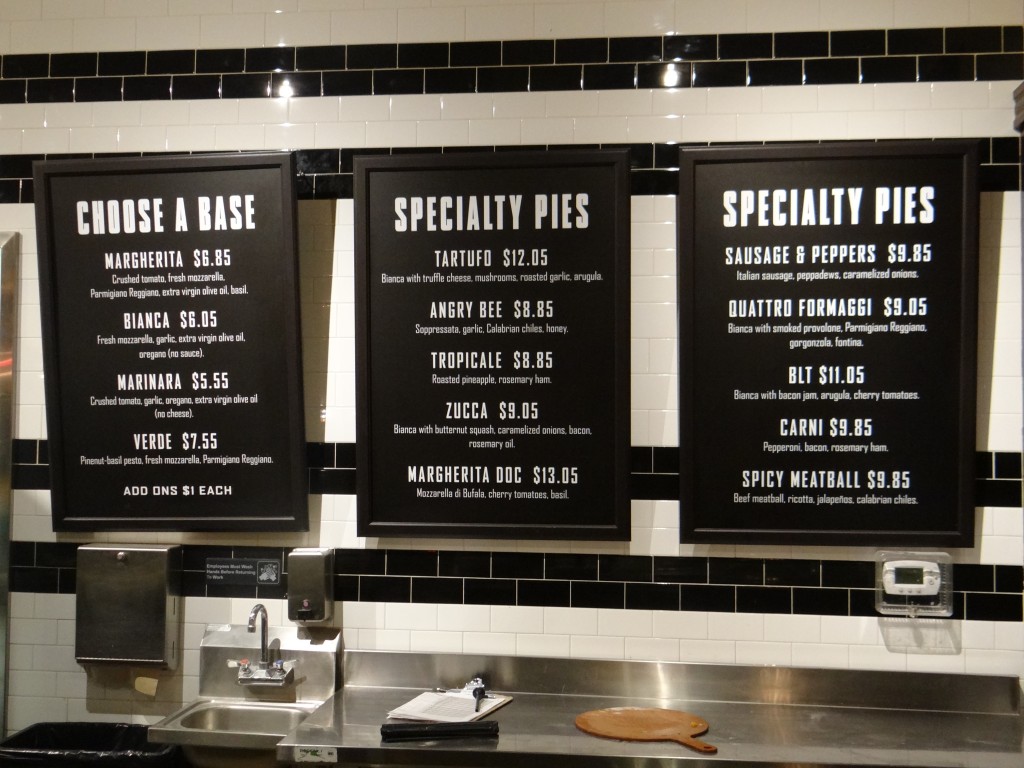 In fact, look at how complicated the menu actually is at 800 Degrees. You can click on it to enlarge it. But you’ll see that there are actually 15 specialty pies listed — five more than are on the wall. Why are these listed on the paper menu, but not on the wall menu? Basically every time I thought I finally made sense to things, I only got more and more confused. Don’t even start with the 40+ add ons.

I avoided ordering specialty pies altogether and built two of my own. The first was a Margherita pie (with a Neapolitan crust). Nothing else. I kept things super simple, as I wanted to be able to judge 800 Degrees on its core product. If they messed up the Margherita, I could certainly blame them. But if they messed up some crazy concoction of toppings I invented… well, then maybe I was to blame? 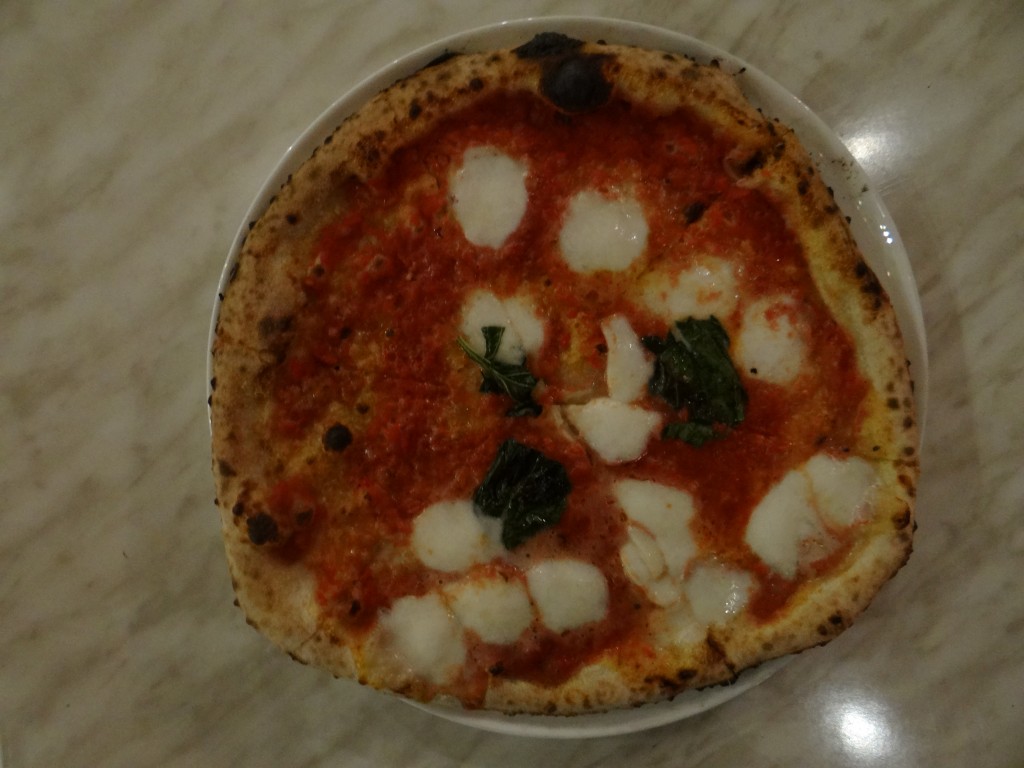 For my second pie I ordered a Verde pie (that’s their pesto base) on a crispy crust with mushrooms, onions and garlic. And I also Mozzarella Di Bufala. Why Mozzarella Di Bufala? Well it was listed on the menu as an add on with a $6 surcharge. $6?!? I had to see what that was all about.

So at the first station, I said I wanted a Verde pie and the man behind the counter topped my pie with pesto, mozzarella, and parm. Then it was time for add ons. I told the next guy I wanted to add Mozzarelle Di Bufala to my pie. He seemed confused (as if nobody had ever made such a request given the high price tag of adding it on). Now rather than just adding it on, he picked every piece of regular mozzarella off of my pie, threw it in the trash and then added the fancy mozzarella on my pie. This is another thing that’s confusing. Three of the four bases already come with cheese. If you want cheese as an add on, it’s unclear if that is an addition to the cheese from the base or if that cheese is suppose to replace the base. If it’s the latter, then the customer needs to specify what cheese they want at the “base” station, not the “add on” station. More confusion. 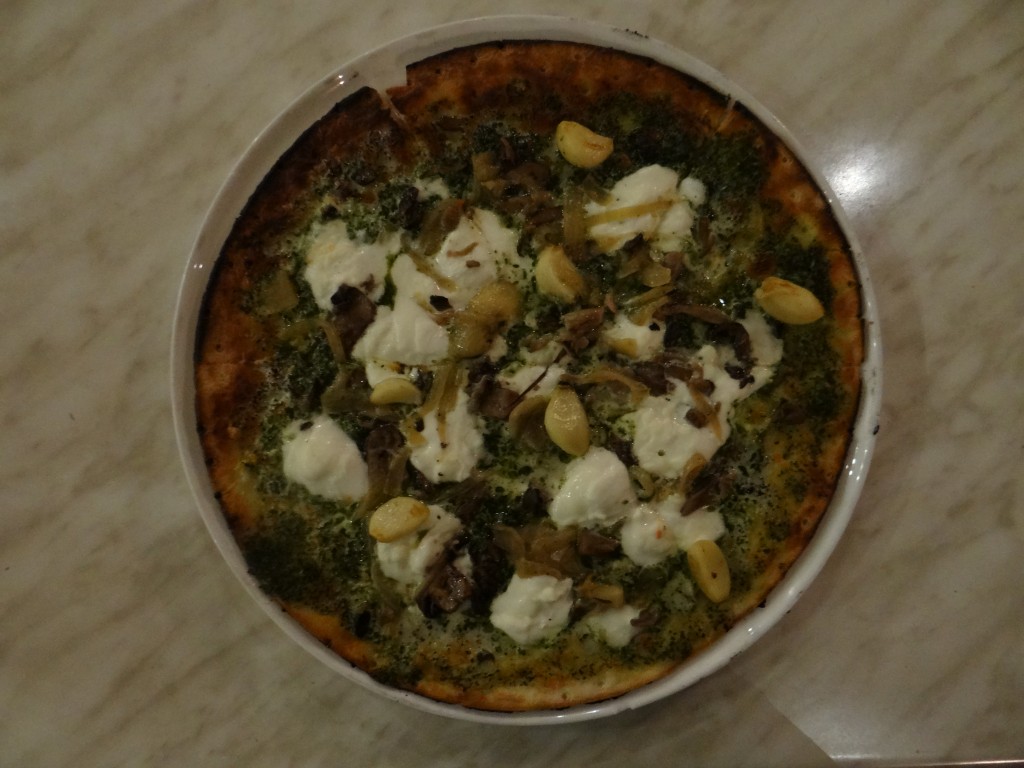 I didn’t love the Margherita. For starters, as you can see in the photo above, the cheese is completely unevenly distributed. When the pie was placed in the oven, all of the cheese fell to one side. That’s really unacceptable. And then, as you can see in the photos below, it was really just impossible to eat. It kept falling apart, breaking in strange places with the ingredients sliding off the crust. It’s definitely one of the worst Margherita pies I’ve had. But, at $6.85 it is also one of the cheapest. I guess you get what you pay for. 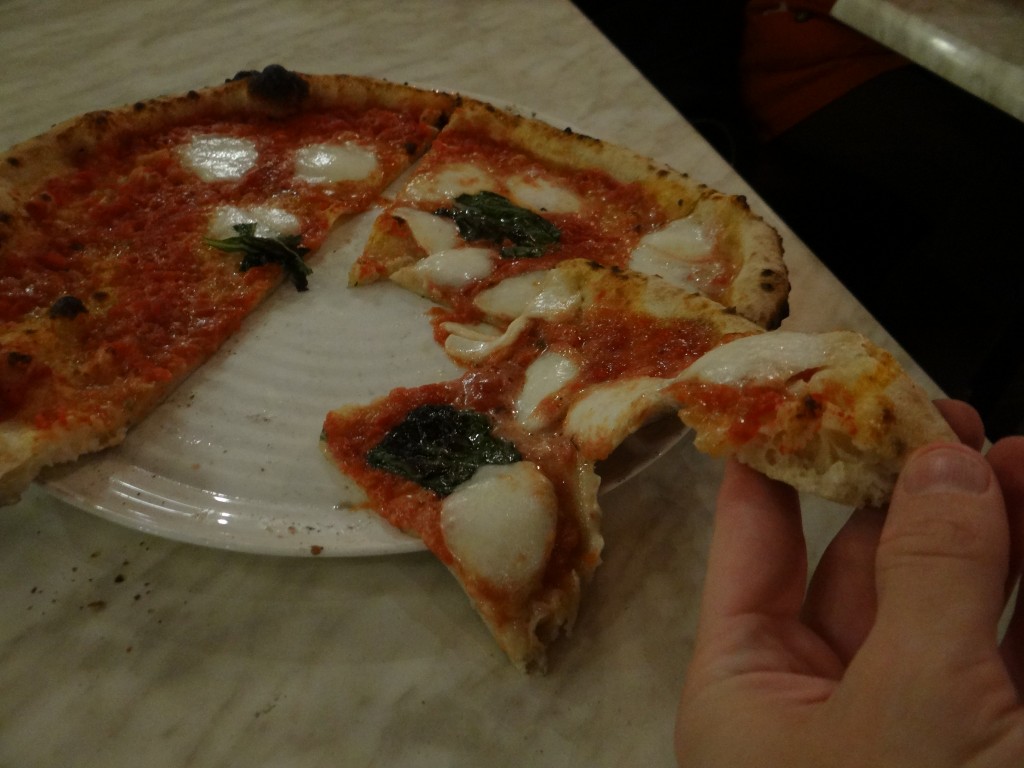 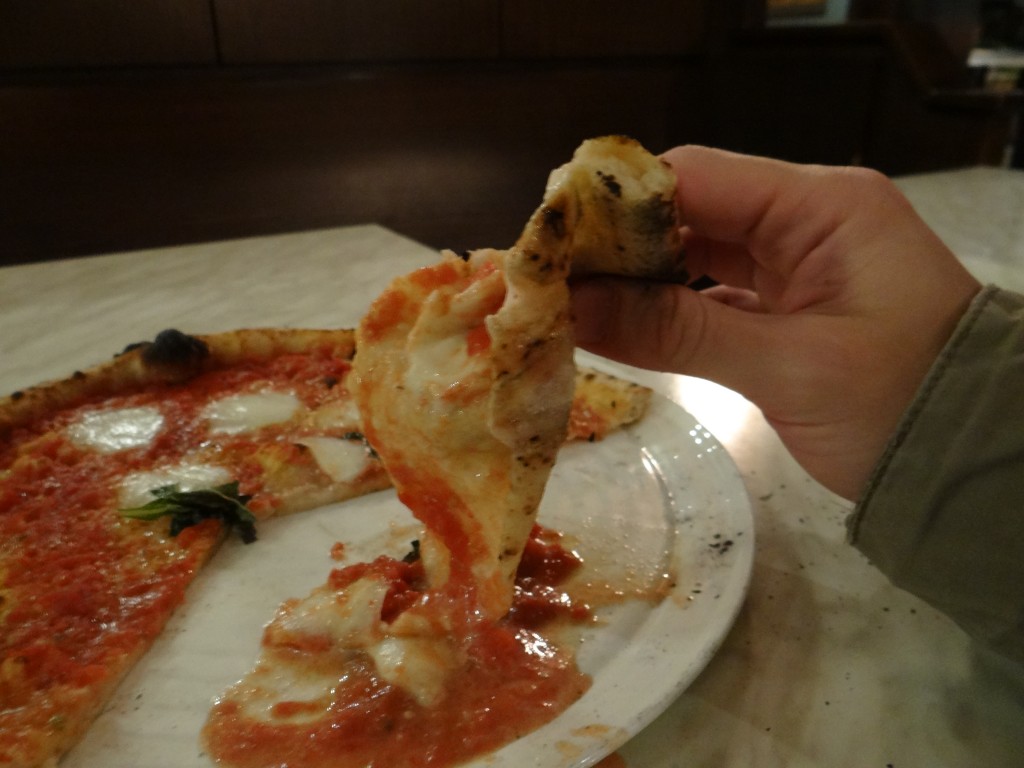 My Verde pie I actually enjoyed quite a bit, except for the crust. But the only reason I chose the crispy crust was to see how it was. And as I’d suspected, I didn’t really care for it. If I went back, I’d probably get the Verde pie again, just on the Neapolitan crust (and without the fancy mozzarella).

The whole idea behind 800 Degrees is customization. And I love that idea. But the execution is poor. And the pizza isn’t all that good. But there is so much potential. Some clarity around the steps of ordering your pizza could go a long way. And some simplification too. How about this: Here are 4 special pies we are offering today for $10. Want one? Great. Don’t want one? Then build your own. Step 1: pick a crust. Step 2: pick a base: Step 3: Pick some add ons.

There will be lots of spots like 800 Degrees popping up in the coming years. And someone is bound to get it right. With some tweaks that could be 800 Degrees. But for now, it’s a poorly executed not so tasty LA pizza chain.