The Persistence Of Pizza

Posted by: I Dream Of Pizza in Miscellaneous January 19, 2011

I’ve been down to Mark Bello’s Pizza A Casa a number of times. He has some fantastic decorations. But the first thing that catches my eye every time is a postcard of the Salvador Dali painting, Persistence Of Memory, with pizzas in place of the clocks.

I’ve done quite a bit of research online, but haven’t been able to track down where it’s from or how to find a copy. So the purpose of this posting is merely to get the word out there and see where I might be able to find this masterpiece. Help! 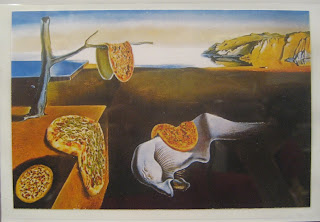