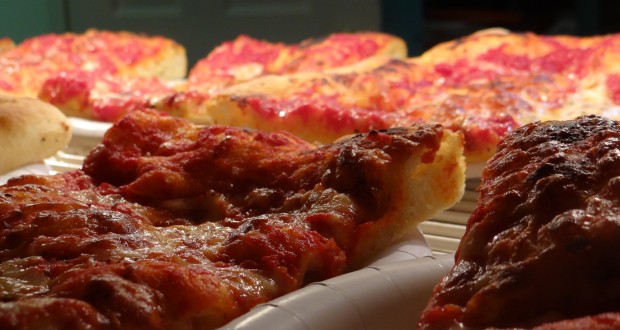 Micucci Grocery: Excellent Sicilian Slices In The Back Of A Portland, Maine Shop

Micucci Grocery: Excellent Sicilian Slices In The Back Of A Portland, Maine Shop

When you think of Portland, Maine, seafood and lobsters are probably what come to mind. But Portland has a thriving food scene that expands beyond water creatures and that includes pizza. I recently made my first trip to Portland and at the top of my list of places to try was an unconventional pizza spot …

Summary : A "hidden" pizzeria in the back of an unassuming grocery store serves sicilian slabs of pizza, as good as they come. The dough is chewy and the tomato sauce is sweet. Don't miss this Portland hotspot.

When you think of Portland, Maine, seafood and lobsters are probably what come to mind. But Portland has a thriving food scene that expands beyond water creatures and that includes pizza. I recently made my first trip to Portland and at the top of my list of places to try was an unconventional pizza spot I’d read about: Micucci Grocery (45 India Street).

To write that Micucci Grocery is a pizza place is a bit of a misnomer. It’s actually, as you can probably tell by it’s name, a grocery store. Walk in through either the entrance on India Street or the side door by the parking lot, and you’ll be greeted with offerings of a typical specialty grocery shop — breads, cheese, flour, pastas, sauces, wine, and beer amongst other local products. But the action here is taking place in the back of the store. 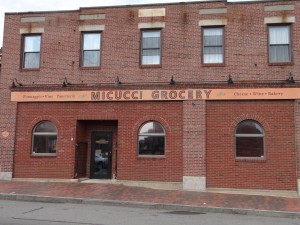 Head up a couple of stairs and veer to your left and you’ll find a tiny room with a rolling rack of breaded goods. Focus on the lower rack which contains slabs of Sicilian pizza. They’ll start to appear a bit before 11AM and the last ones usually come out around 3:30PM. Although it wasn’t crowded when I stopped by on a weekday afternoon around 2PM, I understand it can get crowded back there. As such, the slabs are never sitting out there for long. My girlfriend and I split one — which if you’re not particular hungry is perfectly sufficient. It costs $4.50. 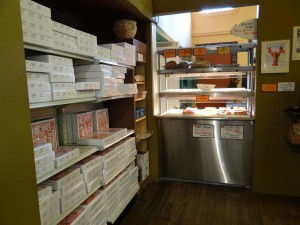 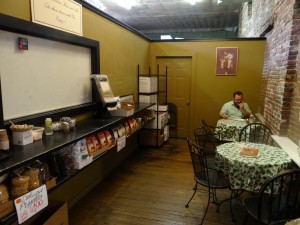 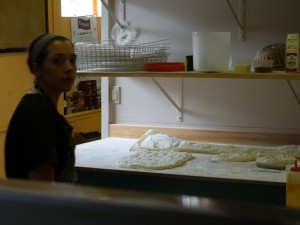 Sicilian pies are not my preferred style of pizza but this was delicious. The crust was bready and chewy — and exhibited some foccacia-like properties. But the highlight for me was the tomato sauce. It’s sweet and smooth, a combination of crushed tomatoes, garlic, salt, and sugar. It some of the best tomato sauce I can recall having on pizza. 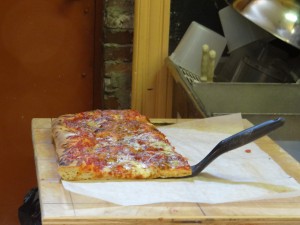 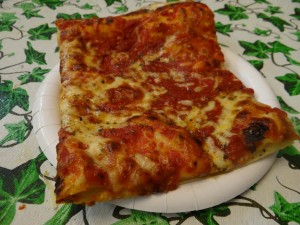 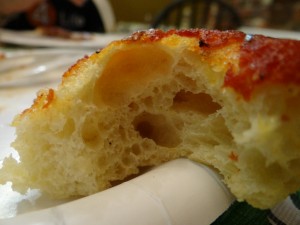 In an odd twist of fate, just days before I visited Micucci, noted baker Stephen Lanzalotta who is responsible for the pizza, was fired after six years at the shop. All of the recipes are his and we might be in for a pizza war in this quaint New England town — certainly a locale where you’d least expect it. Whatever the outcome, I hope Micucci continues to operate this exceptional space featuring Sicilian pizza as good as it comes.

Previous: 180: A Speakeasy Pizzeria Puts A New Spin On Pizza
Next: Some Well Compiled Pizza Lists