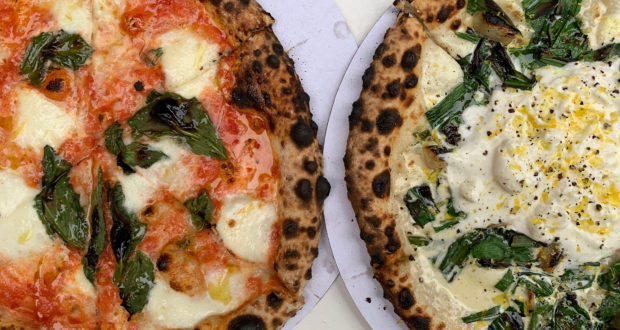 Posted by: I Dream Of Pizza in California, Reviews January 28, 2020

Los Angeles is one of my favorite American food cities. And while the city’s pizza options have improved greatly in recent years (Roberta’s even has an outpost there now), it wasn’t until last year that I tried a truly exceptional Los Angeles pizza spot. La Morra Pizzeria is a mobile pop-up vendor, which can frequently …

Los Angeles is one of my favorite American food cities. And while the city’s pizza options have improved greatly in recent years (Roberta’s even has an outpost there now), it wasn’t until last year that I tried a truly exceptional Los Angeles pizza spot.

La Morra Pizzeria is a mobile pop-up vendor, which can frequently be found at local markets and events — and if you’re lucky — in a slightly more permanent state, as part of a residency. When I first visited La Morra in the spring of 2019, they were serving pies in the lot behind Silver Lake bar Tabula Rasa. And during a trip in January 2020, they had taken over the kitchen of a defunct bar called Kettle Black. Regardless of whether La Morra continues popping up around town or ultimately transforms into a brick and mortar business, I’m confident that their pizza will remain among the best in town — if not the country. 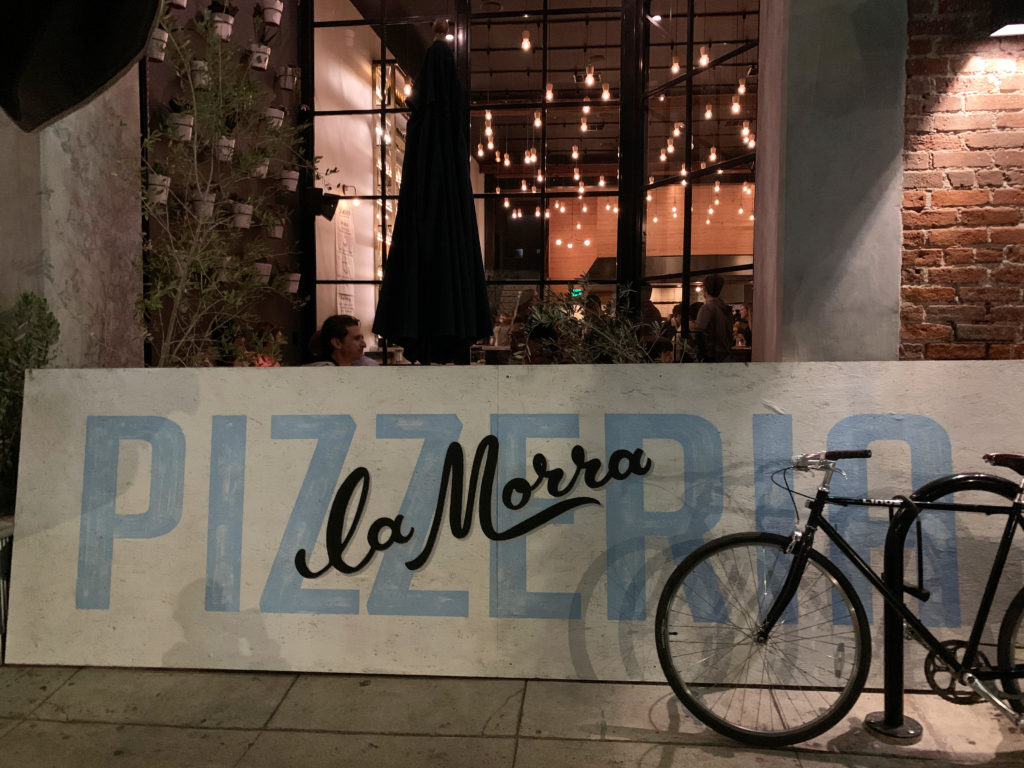 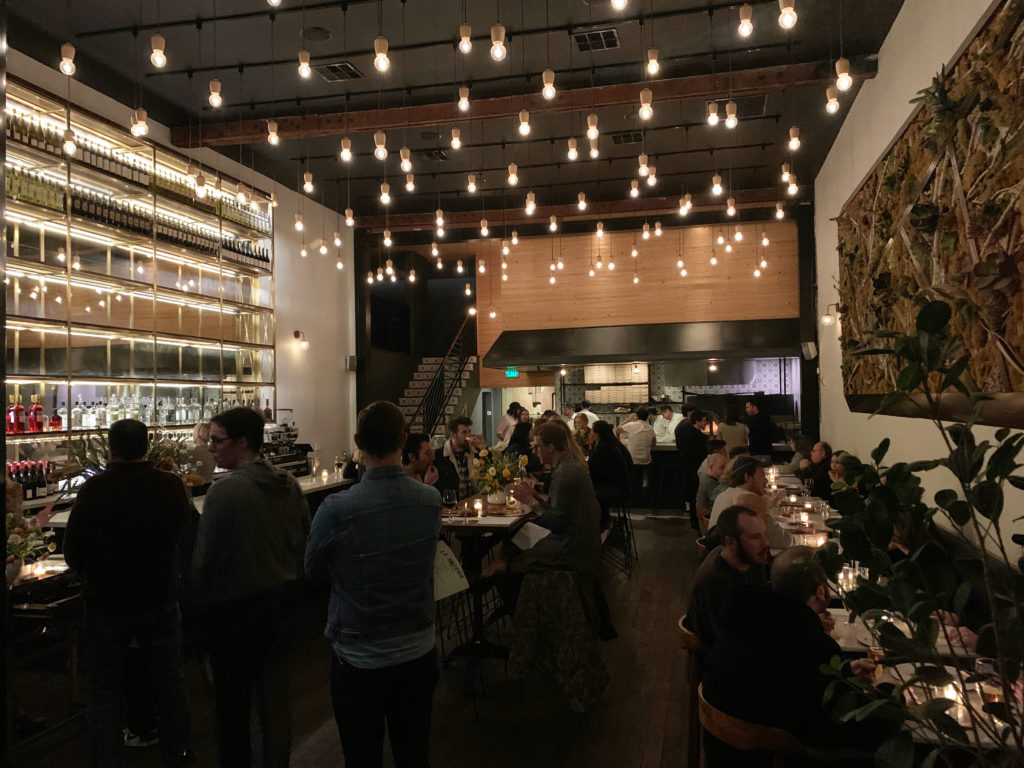 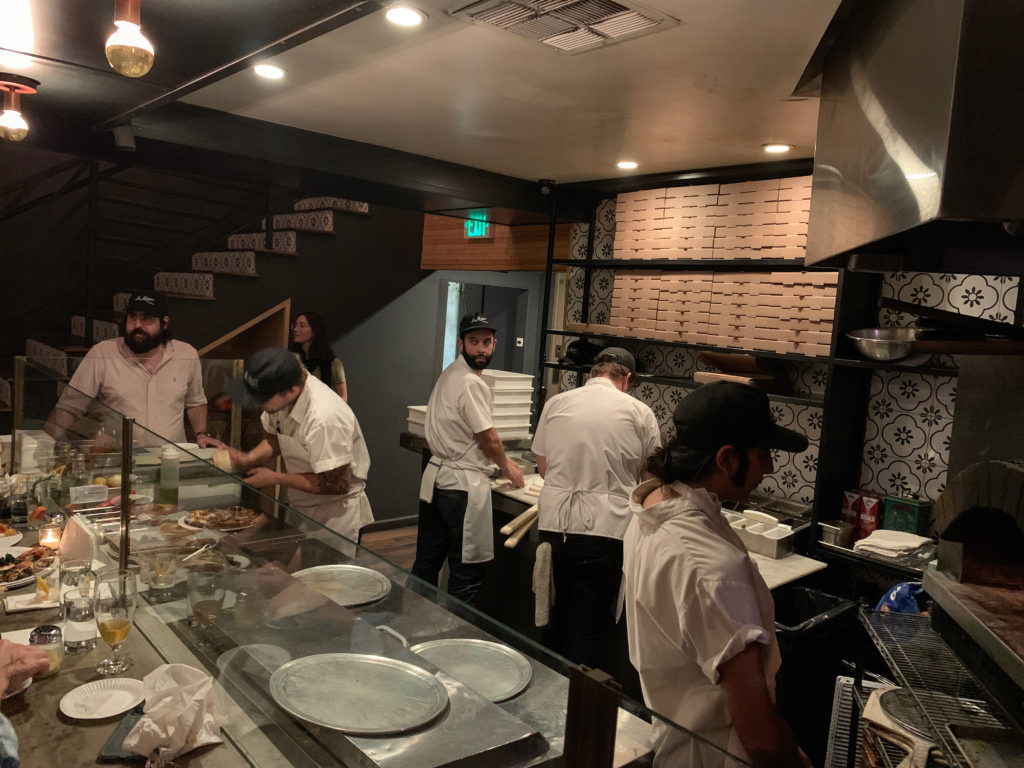 The photos above are from La Morra’s takeover of the Kettle Black space, while below you can see their outdoor operation at Tabula Rasa. Regardless of the space or oven, La Morra’s pie are consistently delicious. At Black Kettle, I could see the skeleton of what a full fledged establishment might look like. But I also like the idea of La Morra as a mobile establishment, setting up shop in various spaces and bringing pizza greatness to different events and happenings throughout the Greater Los Angeles area. 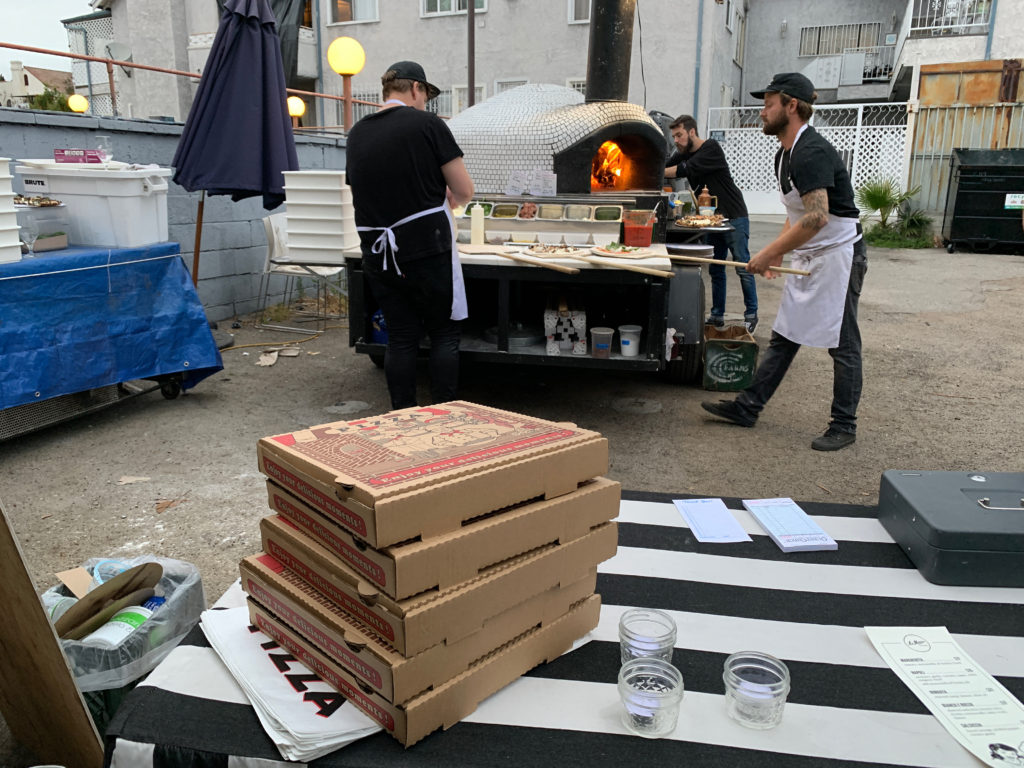 There are so many things that I love about La Morra. But here are two that are top of mind: (1) the topping combinations that La Morra uses would make for delicious standalone dishes, had they not been served on pizza; (2) La Morra’s concise, constantly changing seasonal menu encourages frequent, repeat visits.

I named La Morra’s Burrata pizza (Burrata, Charred Ramp, Lemon, & Olive Oil) the best pizza I had in 2019. I love burrata and I love ramps and this seasonal spring pie combines those two ingredients in generous quantities (literally an entire ball of burrata adorns the center of this pie). Often times I find that restaurants in New York serve a seasonable “ramp” pizza and there is literally a single ramp — barely identifiable — on the pizza. But La Morra piles on the ramps. It’s simple. And delicious. Burrata and ramps would have tasted great even if they weren’t on a pizza. But luckily for me, they were. 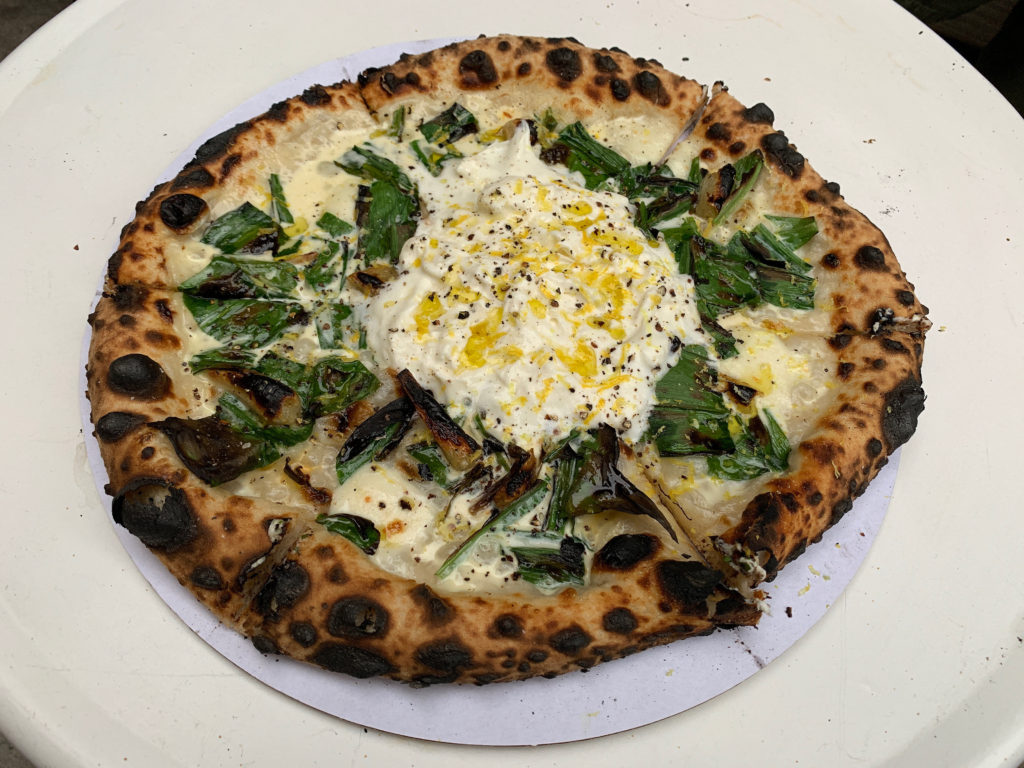 Another favorite pie of mine was their Patate pizza (Shaved Yukon Golds, Raclette, Rosemary and Parmigiano). The toppings on this pie would have be delicious as an appetizer at any restaurant. But once again, La Morra threw them on a pizza and elevated them to another level. In particular, the rosemary was prominent in every bite. It wasn’t a few leaflets of rosemary that were sprinkled on this pie. But multiple sprigs, so every single bite contained that flavor. I also love the non-traditional use of raclette cheese on this pie. Most pizzaiolo probably would have just used mozzarella. 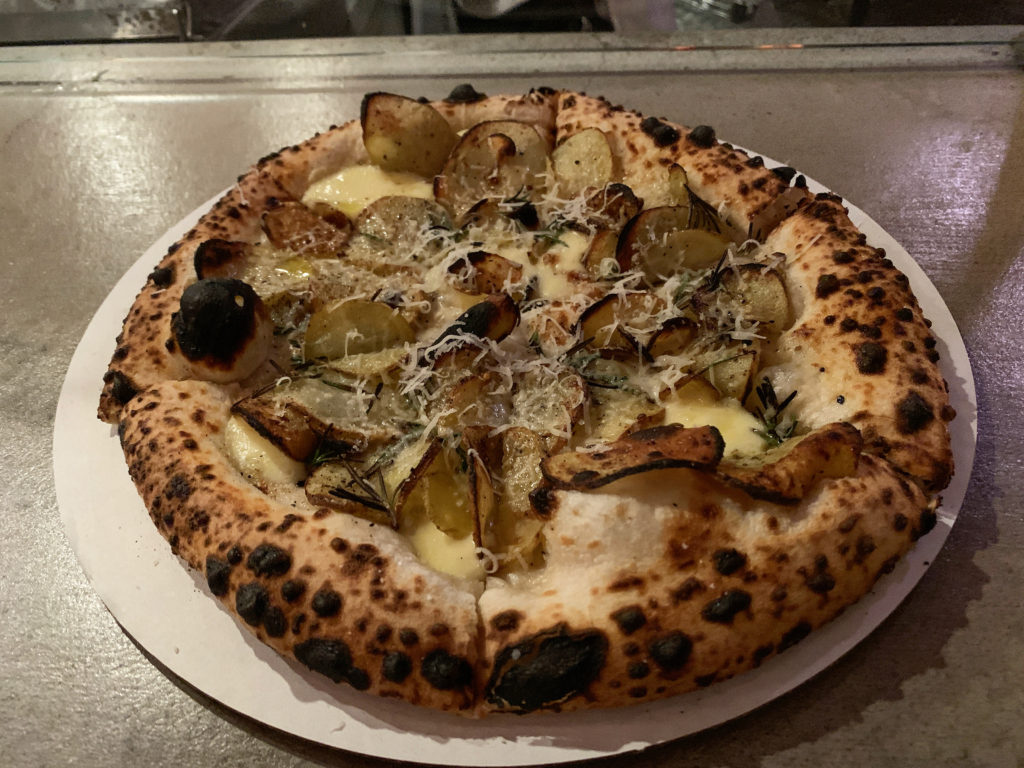 The more simple pies at La Morra hold their ground too. The margherita pie — which as far as I can tell is always available — is excellent. And I also loved a “Cinque Formaggi” pie I had at Black Kettle. Often times “four cheese” pies just contain mozzarella, ricotta, parm, and gorgonzola. But this one included fontina, caciocavallo and fontina (in addition to mozz and parm). You might think it was a white pie, but there was also tomato sauce. And garlic. And oregano. And chili. A normal pizza place would have just thrown some cheese on the pie and called it day. 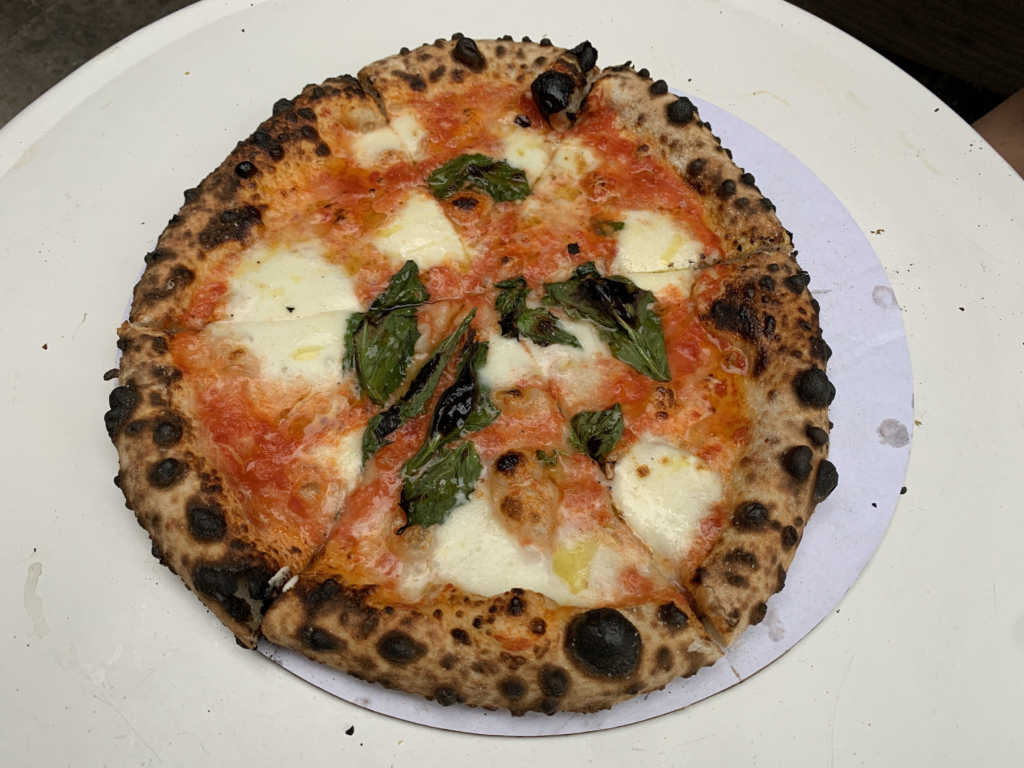 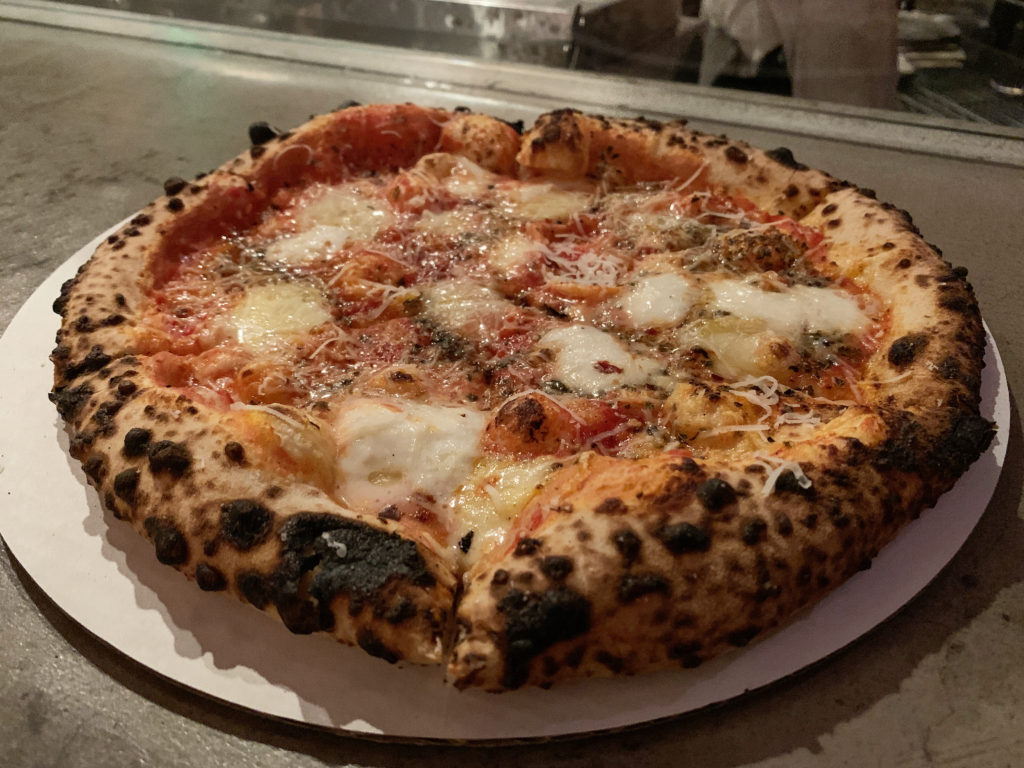 I look forward to visiting La Morra when I’m in Los Angeles, because their menu is constantly changing. Usually they have about five pies available. And the concise menu really allows them to focus on making each one special. Los Angeles isn’t know for its pizza. But hopefully that starts to change with La Morra at the forefront of the city’s evolving pizza scene.