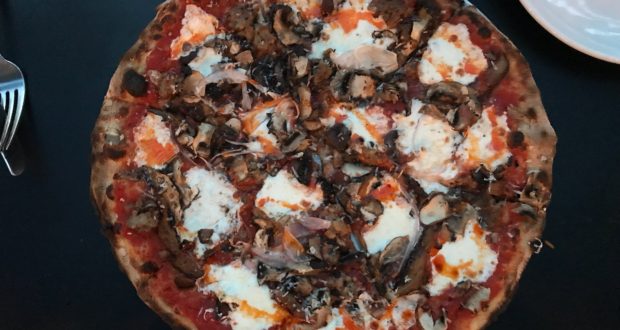 If you dine out at restaurants frequently — especially in New York City — you’ve probably noticed a particular trend over the past few years: more and more dining establishments are opening in boutique hotels. This set up provides many advantages for both the hotel (attracting visitors) and the restaurant owners (little to no overhead …

If you dine out at restaurants frequently — especially in New York City — you’ve probably noticed a particular trend over the past few years: more and more dining establishments are opening in boutique hotels.

This set up provides many advantages for both the hotel (attracting visitors) and the restaurant owners (little to no overhead costs). The resulting partnership often leaves diners with high quality food options in unique spaces. And that’s exactly what’s happening at The Boro Hotel in Long Island City, Queens which houses Bebee’s (38-28 27th Street) in its lobby. 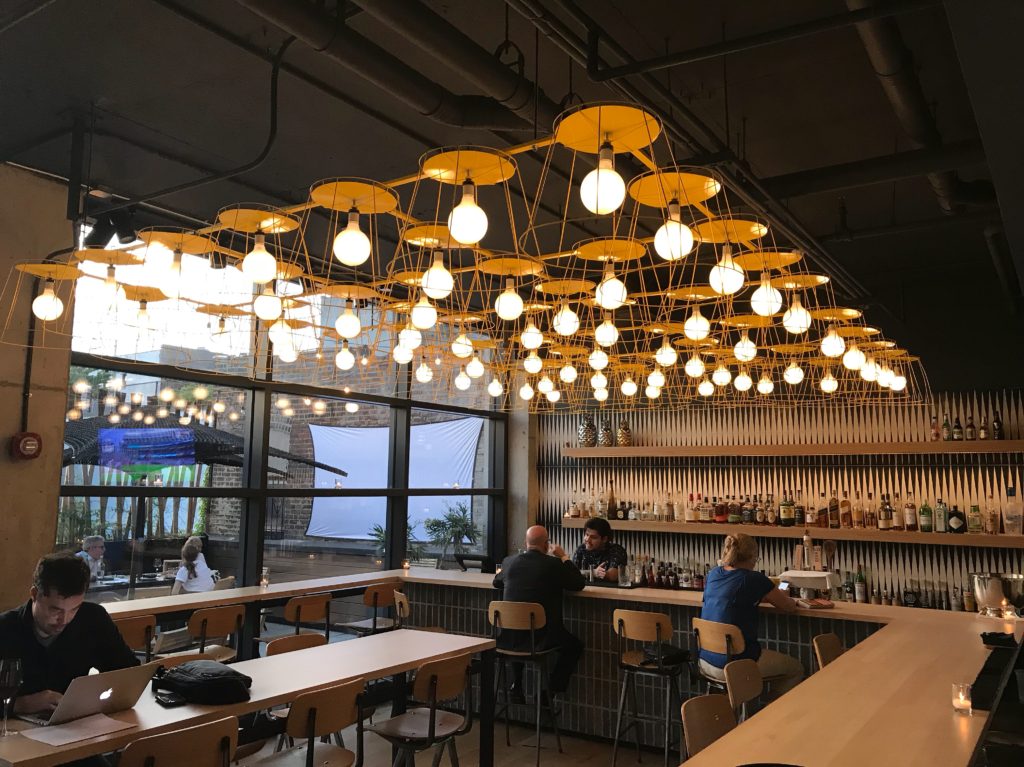 Enter the restaurant and to your right is a bar space where patrons can grab a cocktail or pop open their laptop at a communal table. To your left, is the main dining room, with floor to ceiling west facing windows — providing perfect illumination in the evenings, as the sun sets over Manhattan. Although only 30-40 people can fit inside, the restaurant more than doubles when the weather is warm and they can utilize their patio. 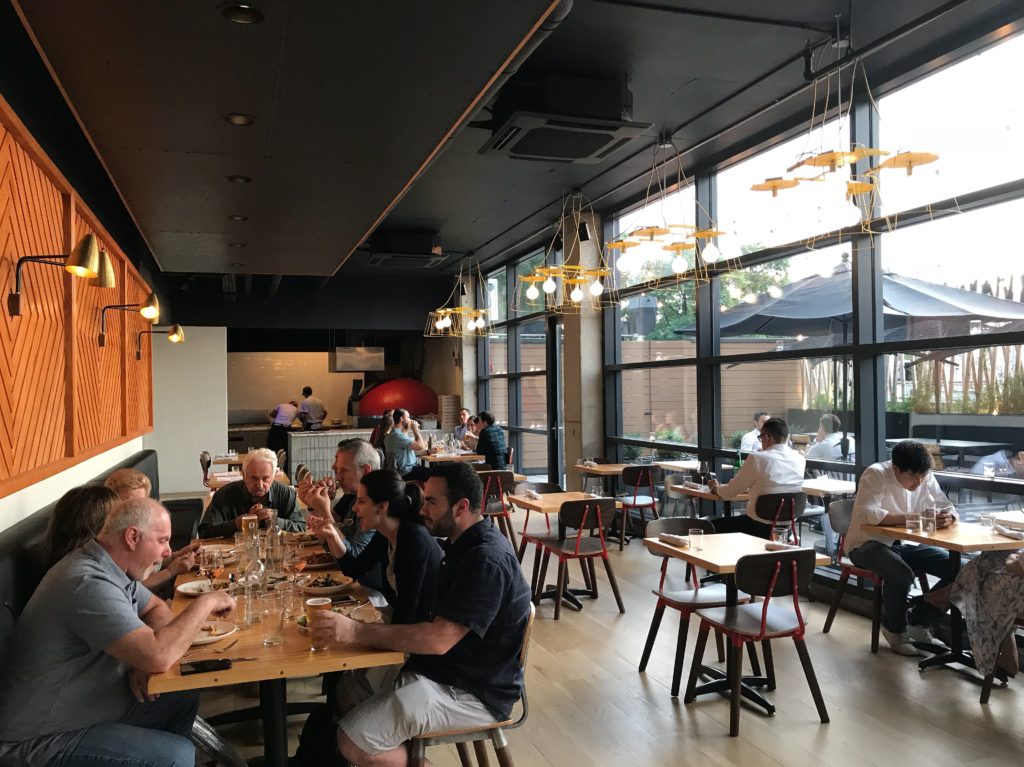 If this space were in Manhattan, it would be packed to the brim on a beautiful summer evening. But alas, it is in Queens — a five block walk from the N/W trains at 39th Avenue. This is not to say that Long Island City can’t support a restaurant like this. But I have to question what the hotel vacancy rate is in the middle of the week. You would think that a healthy percentage of potential diners here might be hotel guests. This is not exactly destination-worthy pizza we’re talking about. There were a handful of people enjoying dinner on a recent Wednesday evening. So maybe this is a good spot to escape the crowds. 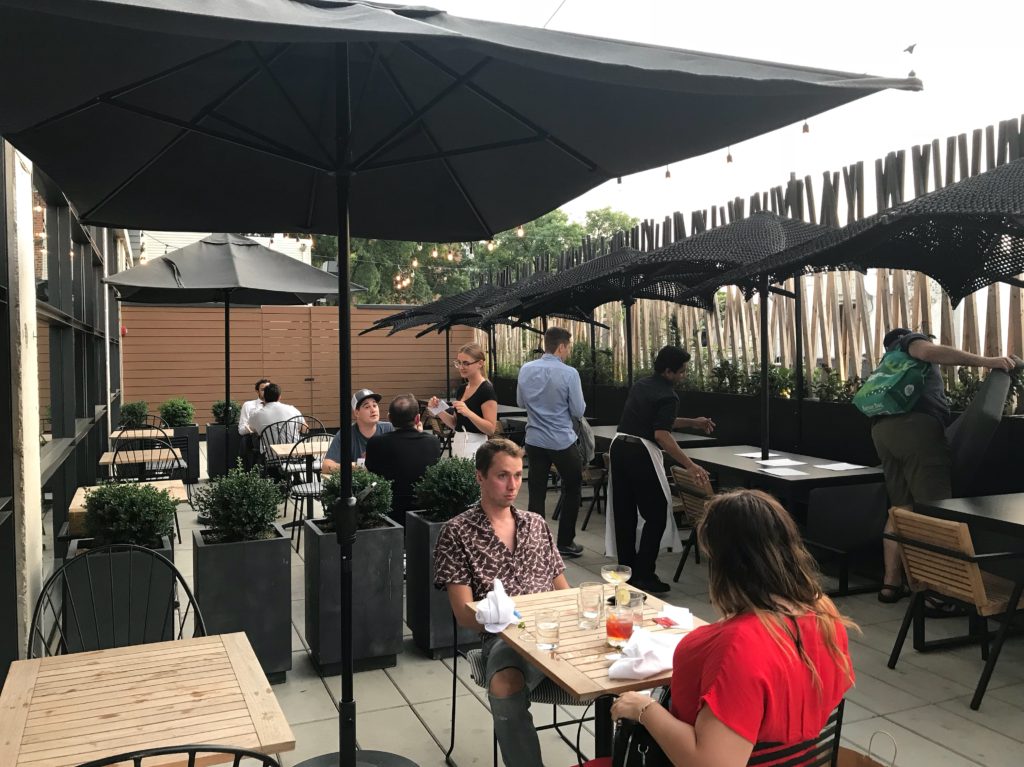 Run by a former chef from Paulie Gee’s and Emmy Squared (strong creds!) the restaurant serves seven pies — most of which are pretty straightforward. Mozzarella is the primary cheese featured on every pie, except for the stracciatella pie which features (drum roll, please): stracciatella (a distant cousin of mozzarella). This was actually my favorite pie there. It comes topped with post-oven arugula, tomato sauce, black pepper, and olive oil.

I love mushrooms, but was disappointed in the Campfire pie which also features (smoked!) mozzarella + pecorino, rosemary and olive oil. The other two pies I tried were the margherita, which was tasty, but unremarkable. And the Jimmy Forager featuring tomato, mozzarella, pecorino, sweet fennel sausage, mushrooms, red onion, and calabrian chili oil. It was by far the most intricate pie on the menu, and my second favorite of the evening. I probably would have swapped out the chili oil for some Mike’s Hot Honey though. 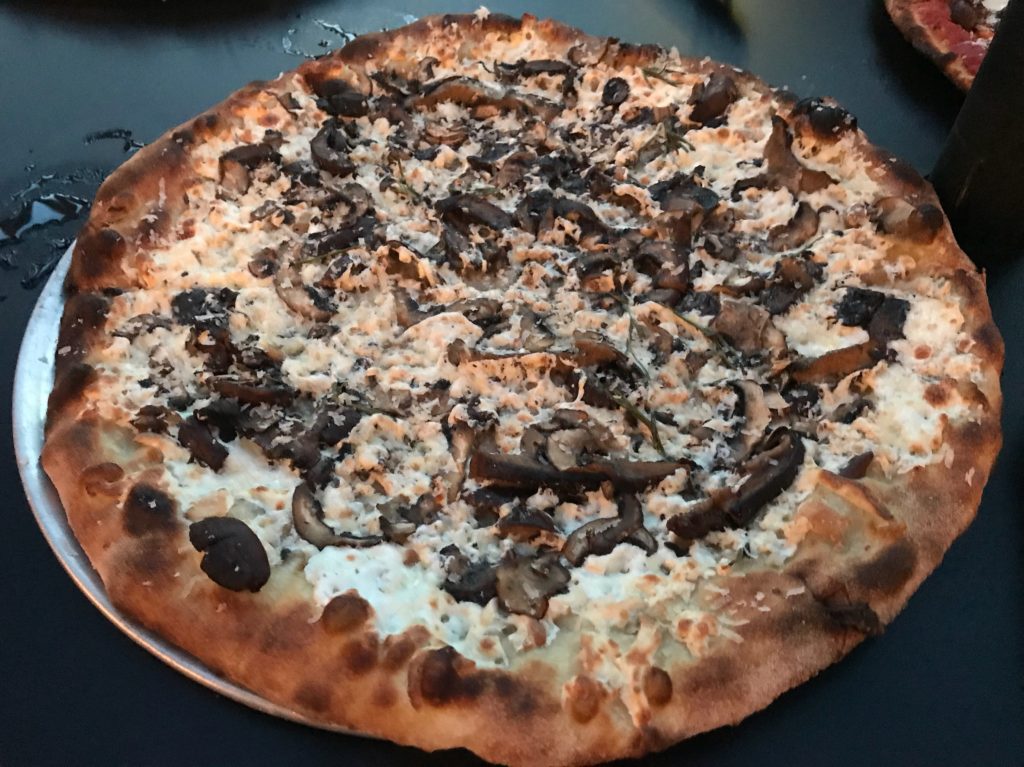 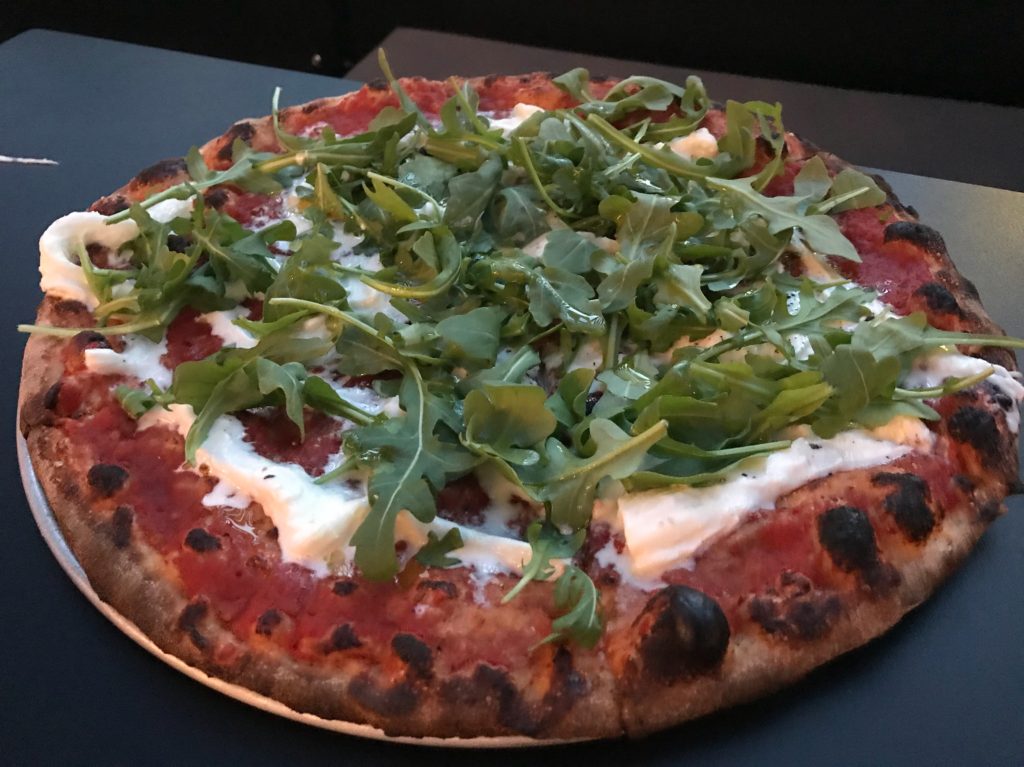 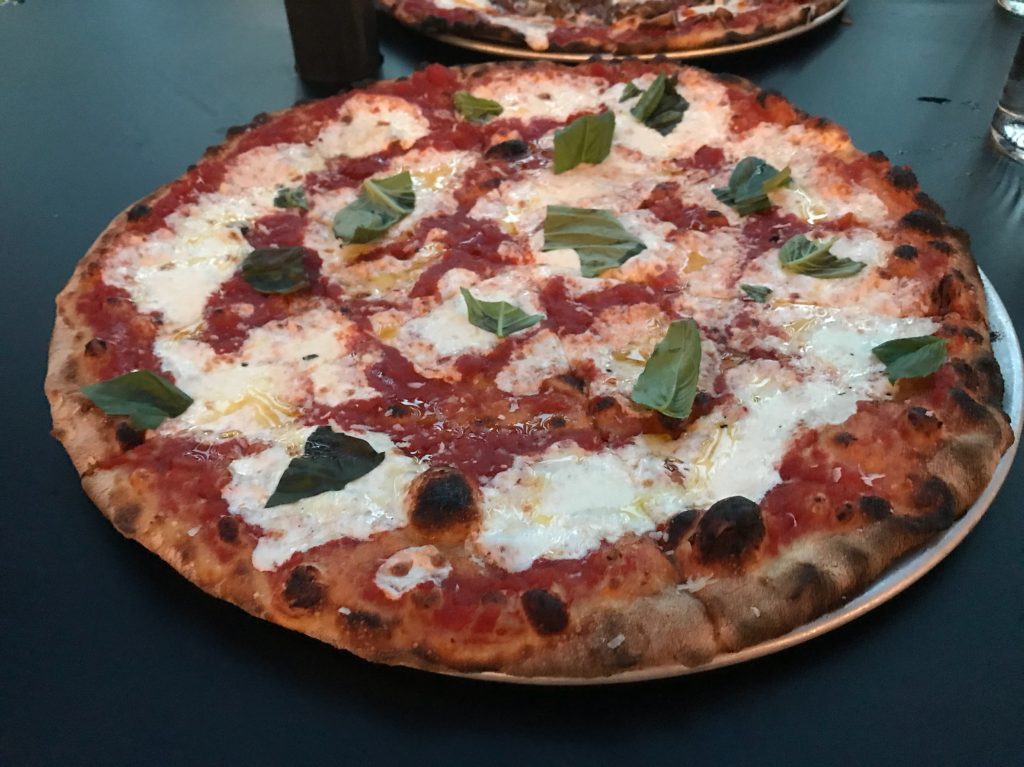 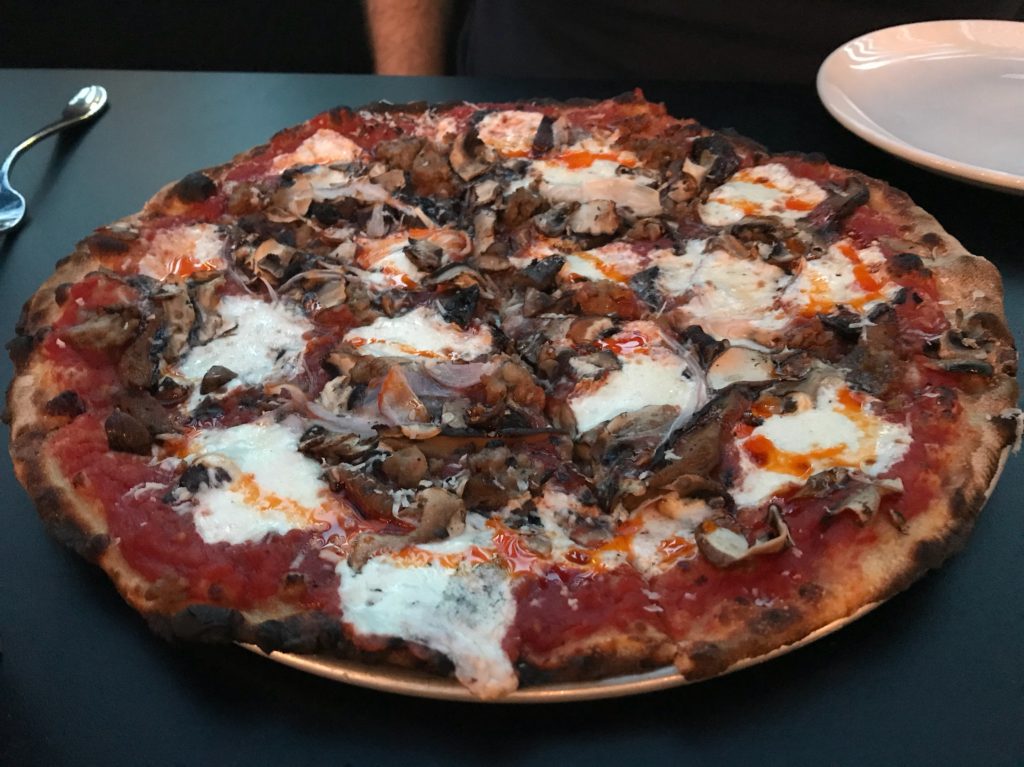 The highlight of Beebe’s is definitely the space — not the pizza. That’s not to say the pizza is bad. It might be some of the best pizza you can get at a restaurant hotel. And it’s certainly worth swinging by if you live in the neighborhood. But if not, there is probably better pizza to be had in your own neighborhood. However, the space is pretty awesome. And as more and more development takes place in Long Island City (a neighborhood not known for having good pizza, I might add), I can see Beebe’s being very successful.

2018-08-07
I Dream Of Pizza
Previous: Bocce + Pizza: A Perfect Combination In Union Square
Next: Pies On The Jersey Shore: Porta In Asbury Park