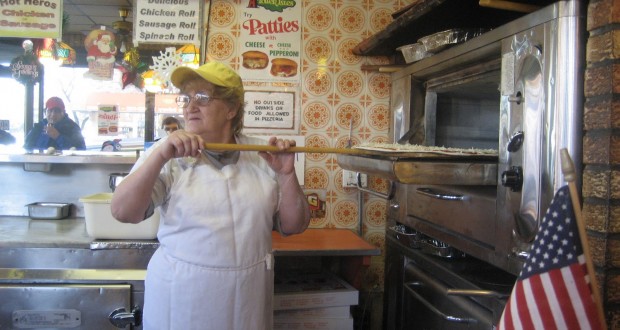 I’ve been determined to find great pizza in Queens. In my opinion, it’s the least pizza worthy borough… but there is so much potential. The culinary landscape in Queens features a melting pot of high quality, authentic ethic food. But pizza has yet to make it’s mark. Nevertheless, I was excited to join Scott from …

Summary : This old school pizzeria serves a solid classic New York slice. The facade and inside are nostalgic and the place truly embodies everything you would want from a neighborhood institution.

I’ve been determined to find great pizza in Queens. In my opinion, it’s the least pizza worthy borough… but there is so much potential. The culinary landscape in Queens features a melting pot of high quality, authentic ethic food. But pizza has yet to make it’s mark. Nevertheless, I was excited to join Scott from Scott’s Pizza Tours on a recent trek around the borough in search of a good pie.

We visited Dee’s (107-23 Metropolitan Avenue) in Forest Hills, but with 26 pies on the menu, a return visit is needed. We swung by Rosa’s Pizza (5526 69th Street) in Maspeth and Junior’s Cafe (4618 Vernon Boulevard) in Long Island City. But the highlight of the day was an old school slice joint in Elmhurst: John’s Pizzeria (85-02 Grand Avenue). 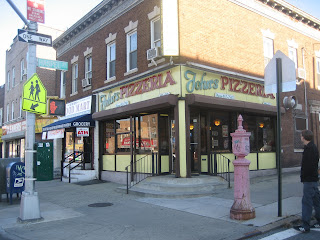 The exterior of John’s is like a sight from the 1960s — off yellow paint serves as a backdrop for a sign that looks like it’s never been replaced. And when you step inside, the experience is as authentic as you might imagine. I did, however, have some trepidation about what kind of folks were behind the place. Signs were plastered all over the store that would have made you think you were back in Catholic grammar school. Rules included:

No bills over $20. No exceptions.
Please pay when served.
No outside food or drinks.
Cash only.
No restrooms.

So who was running this tight ship of a pizza place? Two of the sweetest ladies you’ve ever met: Rose and Susan Bagali. I was a bit surprised to see the mother and daughter team dressing up pies and throwing them in the oven. The pizza world is extremely male dominated. On occasion I’ll spot a women in the kitchen at a pizza place. But never have I seen a pizzeria being run by only women.

Besides the fact that the pizza is actually quite good… my favorite part about John’s is that nothing appears to have been updated in years. The signs behind the counter feature old Pepsi logos and the light fixtures look like they’re from the lobby at my grandmothers retirement home. All of these little quirks are what makes visiting John’s so special. It’s rare to find spot that is suspended in time. 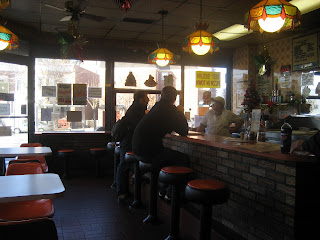 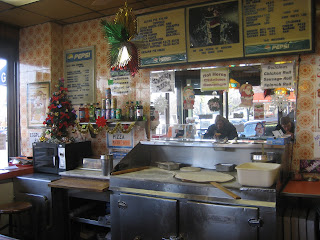 John’s features regular cheese slices for $2.35 and sicilian slices for $2.60 (the prices might be the only things that have changed over the years)! Both were tasty, but I was especially impressed by the sicilian slice. Soft and chewy, it contains what I can only describe as a cake-like texture. The regular slice resembled the 1964 Style pie at Santillo’s in Elizabeth, NJ — crunchy with a slightly charred crust and and a generous amount of oil on top. 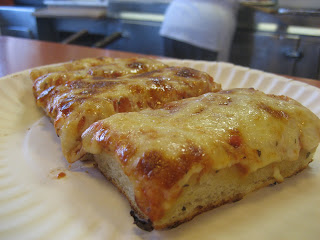 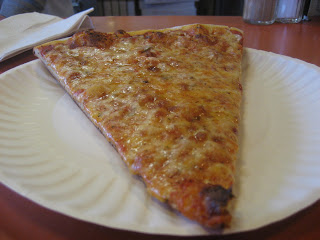 For 45 years, John’s has been a neighborhood staple. They rely a lot on local patrons and are a true mom and pop shop (technically a mom and daughter shop). They stopped doing delivery because the people they hired were unreliable. And business is down during the daytime because the school around the corner stopped letting students eat lunch off campus. If this was a Papa John’s, the folks behind the counter wouldn’t care about such things. But as a neighborhood institution, John’s is counting on local residents to keep them in business for another 45 years. And as long as they don’t change their pizza recipe… I have a feeling they won’t be going anywhere.