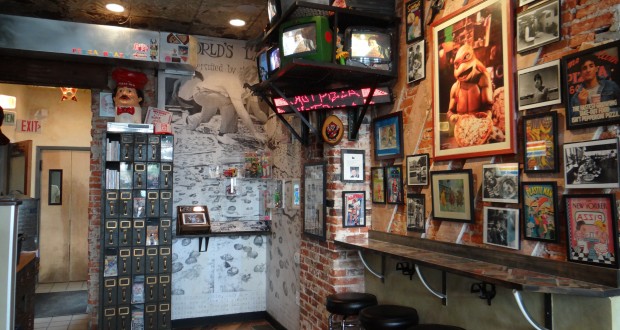 Is a museum? A pizzeria? Well, actually it’s both. Pizza Brain (2313 Frankford Avenue) is the world’s first pizza museum. And what good would a pizza museum be if you can’t grab a pie there? Twenty-something Brian Dwyer’s only started collecting pizza-related items memorabilia over the past few years and quickly amassed what is officially the …

Summary : The decor in this pizza mecca cannot be beat and pizza happens to be pretty great, as well. Especially its most basic offering: The Jane.

Is a museum? A pizzeria?

Pizza Brain (2313 Frankford Avenue) is the world’s first pizza museum. And what good would a pizza museum be if you can’t grab a pie there? Twenty-something Brian Dwyer’s only started collecting pizza-related items memorabilia over the past few years and quickly amassed what is officially the world’s largest collection of pizza memorabilia. What started as a pizza themed art show in 2010 has turned into an epic pizza experience.

First up: the “museum” aspect of the spot. Honestly, the term museum might be a bit of a misnomer here. More accurately, Pizza Brain is a pizzeria which is very heavily decorated with pizza memorabilia. There are a couple of interactive components to the space, but mostly it’s just an opportunity to gaze at pizza decorations as you enjoy what happens to be some delicious pizza. I personally dream of pizza, but this space is any pizza lover’s dream. 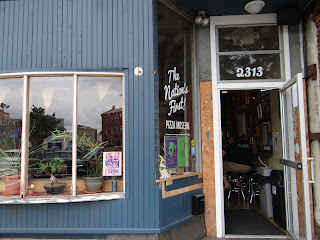 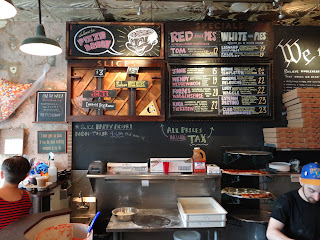 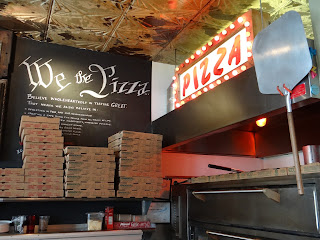 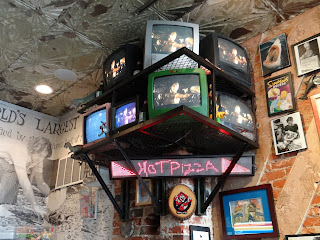 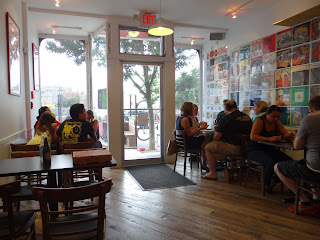 There is a lot on display, but what would be cool is if items rotate throughout the year. Certainly Pizza Brain has the potential to continue to amass items. A good 5-10 minutes is sufficient to see everything on display. Here are a few of my favorite items:

Pizza mirror. There is only one (rubber) slice of pizza below, but what you look at it, at the proper angle it appears as if there is a whole pie in front of you. 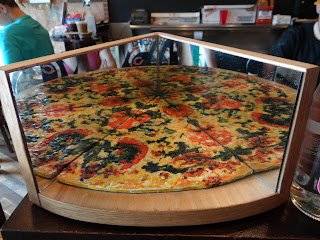 Pizza action figures. Teenage Mutant Ninja Turtles are synonymous with pizza. But the museum also displays many heroes who you might not associate with pizza — like Spiderman! 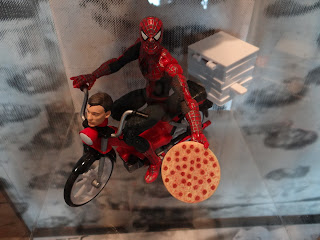 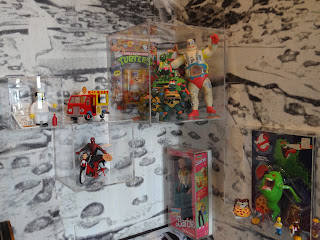 Celebrity pizza photos. Most of these are digital in the form of an iPad slideshow, but I really enjoyed seeing the likes of Charles Barkley and Kurt Cobain enjoying a slice. Come to think of it, this is probably one of the most enthusiastic Cobain expressions I’ve ever seen captured. 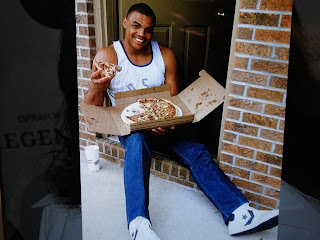 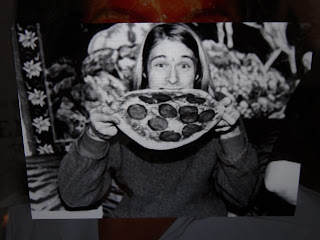 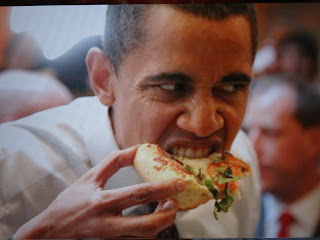 Troll pizza chef. This one falls under the many miscellaneous pizza items you’ll find at Pizza Brain. But this Troll is particularly awesome. Who doesn’t love a pizza Troll? 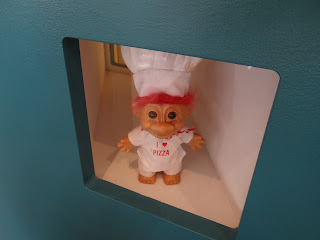 Pizza album covers. One of the walls at Pizza Brain is covered with album covers that have even the most vague connection to pizza. What, you don’t remember The Gaylords’ Let’s Have A Pizza Party? 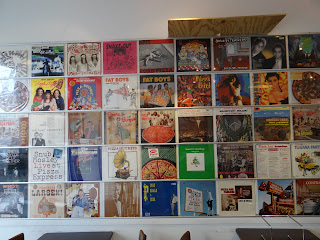 Movie memorabilia. This one in particular brought back memories… of the famous pizza scene from Home Alone. Buzz is still is a jerk! 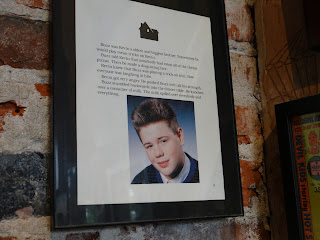 Historical items. Like this napkin menu from one of the first Pizza Hut restaurants on the Wichita State University campus from the 1950s. 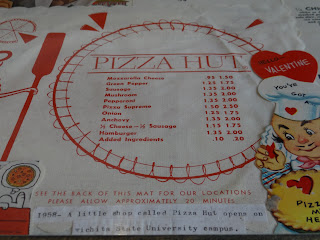 As you can tell this place likes to have fun with the names of its pies and its topping combinations. We opted for a slice of the Jane and Leonard Bookman, as well as a pie of the Felix Huppert (Gruyere, Mozzarella, Fresh Thyme, Caramelized Onions). The slices cost $3.00 each and it’s worth noting that they are much larger than the slices you get in a pie. In fact, to give you a sense of how large they are, I held them up to my face. It’s well worth $3.00 and may actually be a better deal that an entire pie.

My favorite type of pizza at Pizza Brain was the Jane, its most simple offering. The three types of cheese combine supurbly with the tomato sauce in a proportion that is right on par with what I enjoy. With three types of cheese, you might expect a gooey slice, but the Jane is anything but that. The basil adds a nice touch. This would give any New York slice joint a run for its money. The other slice, The Leonard Bookman, was average. The ricotta overwhelmed all of the other flavors and although it was tasty, it would seem there are better offerings. Like the pie we ordered: Felix Huppert. It’s a white pie that is defined by the delectable glops of caramelized onions spread around. I’m excited to return to Pizza Brain and try all their pies. I’d recommend coming with a group of 6-8 people, so you can order a few of the pies which aren’t on the days “slice” menu. 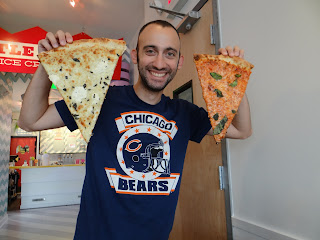 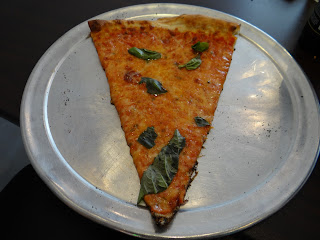 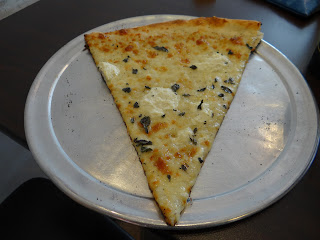 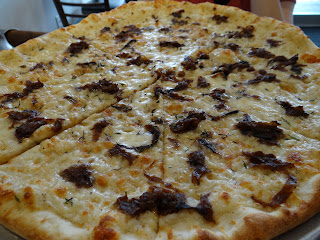 Before you leave Pizza Brain make sure you pay a visit to the backyard. There is a nice seating area there, but what is most impressive is a massive mural — a tribute to the city of Philadelphia and pizza eating. You’ll find caricatures of some of Philly’s most notable personalities — from athletes to politicians (and every the Philly Phanatic) – enjoying a slice. It’s the perfect way to end a visit to Pizza Brain. I will certainly be back to try more pizza and check out what I hope to be a rotating display of pizza’s greatest memorabilia. 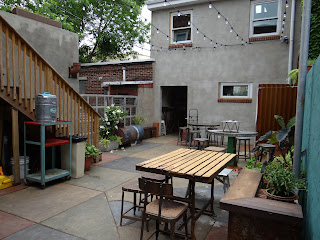 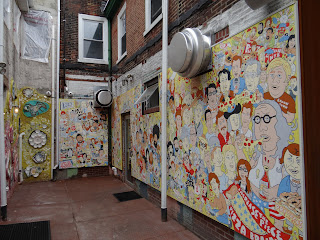