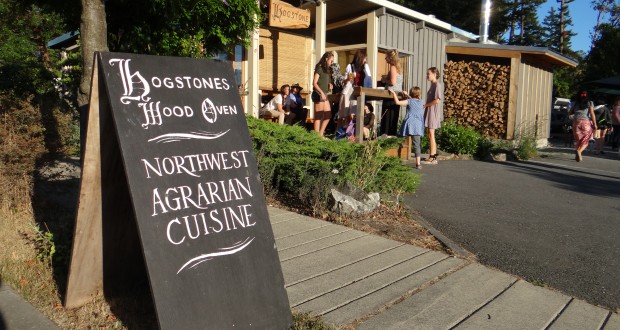 Question: Have you ever felt like you were in an episode of Portlandia? I’ve traveled to the farthest corners of Brooklyn, heck I’ve even been to Portland a bunch, and never have I felt more like Fred and Carrie than at Hogstone’s on Orcas Island in Washington State. It’s as if someone built a pizza place …

Question: Have you ever felt like you were in an episode of Portlandia?

I’ve traveled to the farthest corners of Brooklyn, heck I’ve even been to Portland a bunch, and never have I felt more like Fred and Carrie than at Hogstone’s on Orcas Island in Washington State. It’s as if someone built a pizza place and thought — how can we make it as hipster as possible?

I know what you’re thinking. You’ve been to Roberta’s in Brooklyn. Maybe you’ve even been to Ken’s Artisan Pizza in Portland. Or Pizzicletta in Flagstaff. Well Hogstone’s puts all of those places to shame with its level of hipstersdom. It’s so hipster, I can’t even describe it. But I’ll try. Or maybe these photos will help paint a picture. 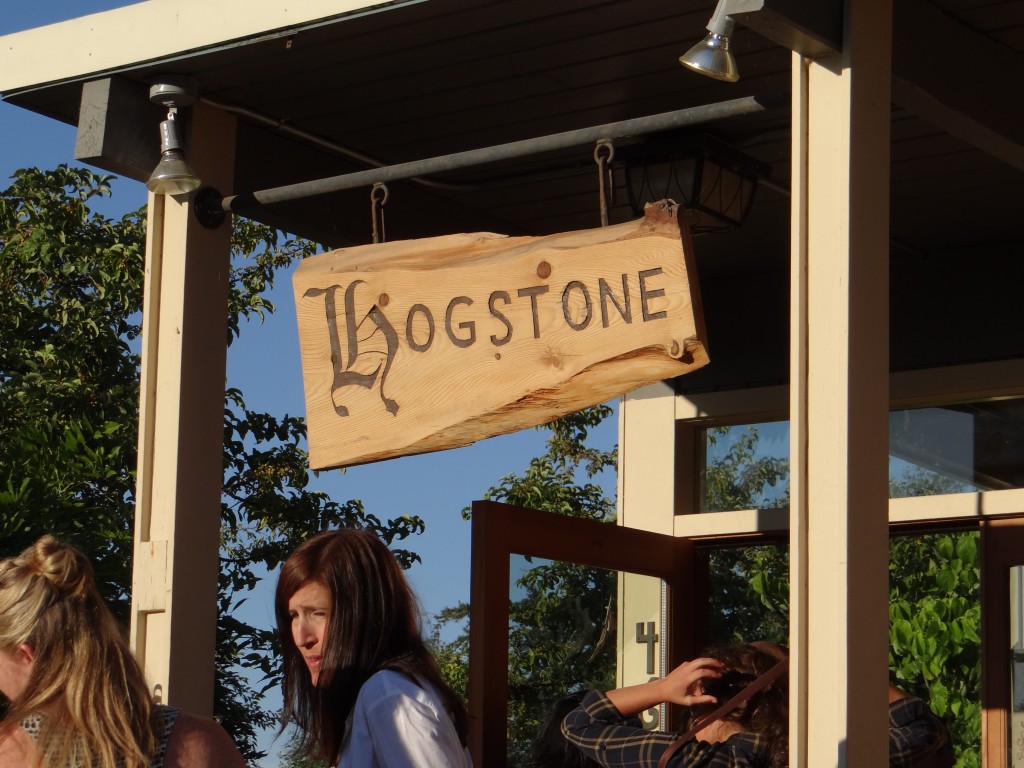 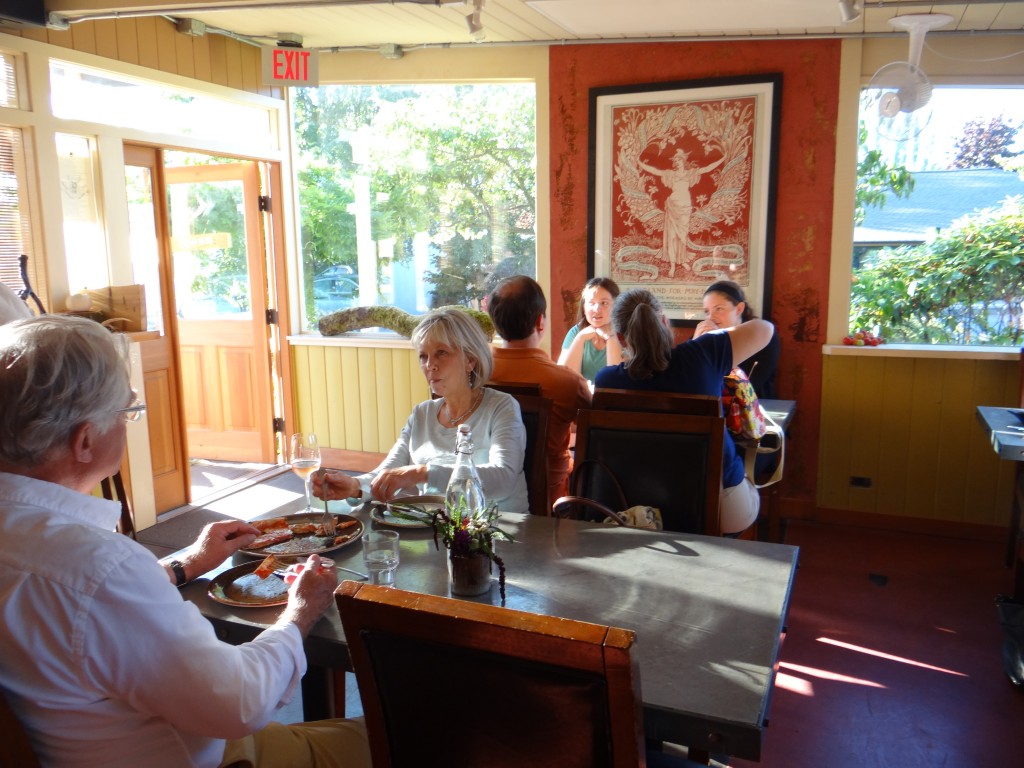 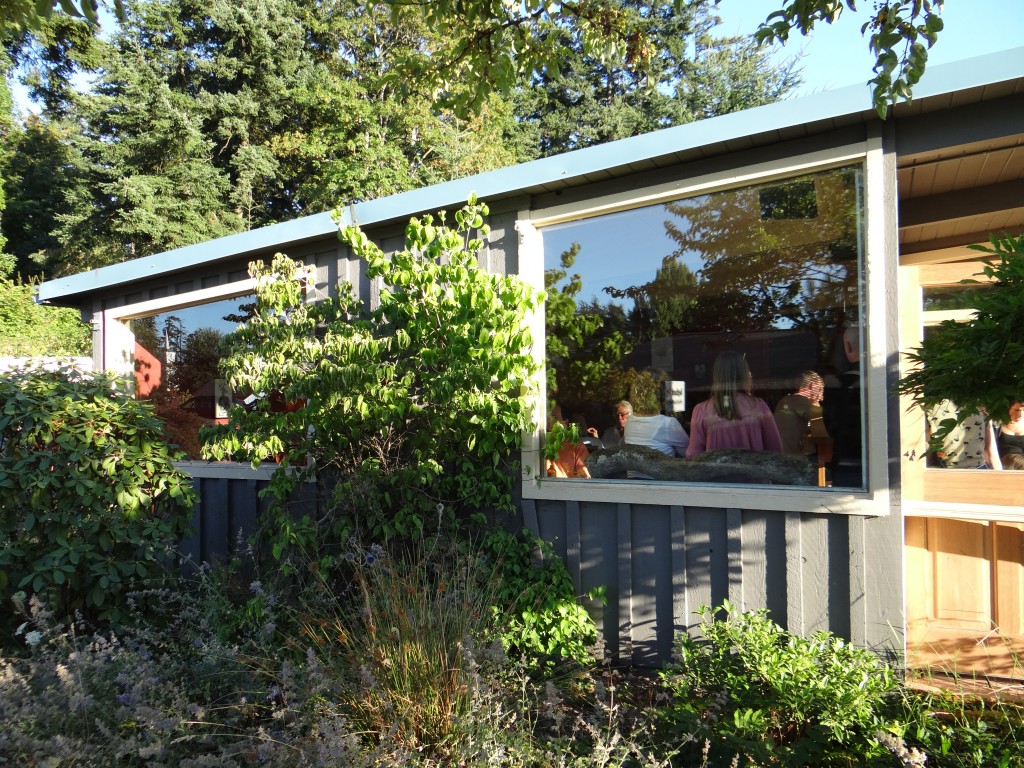 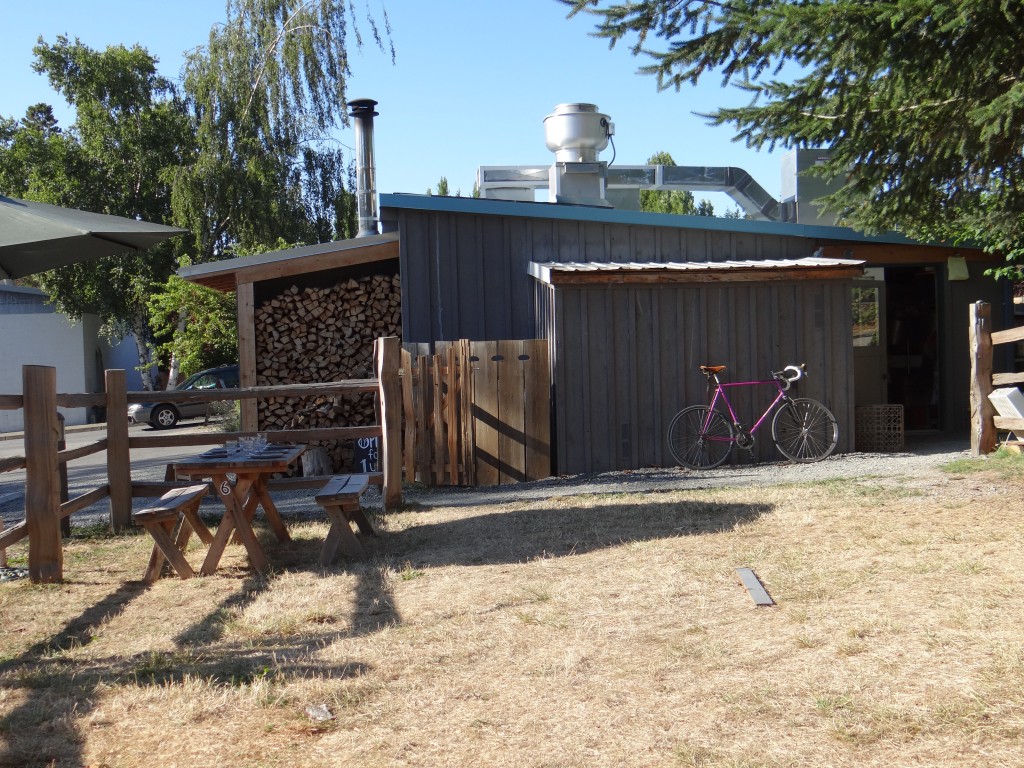 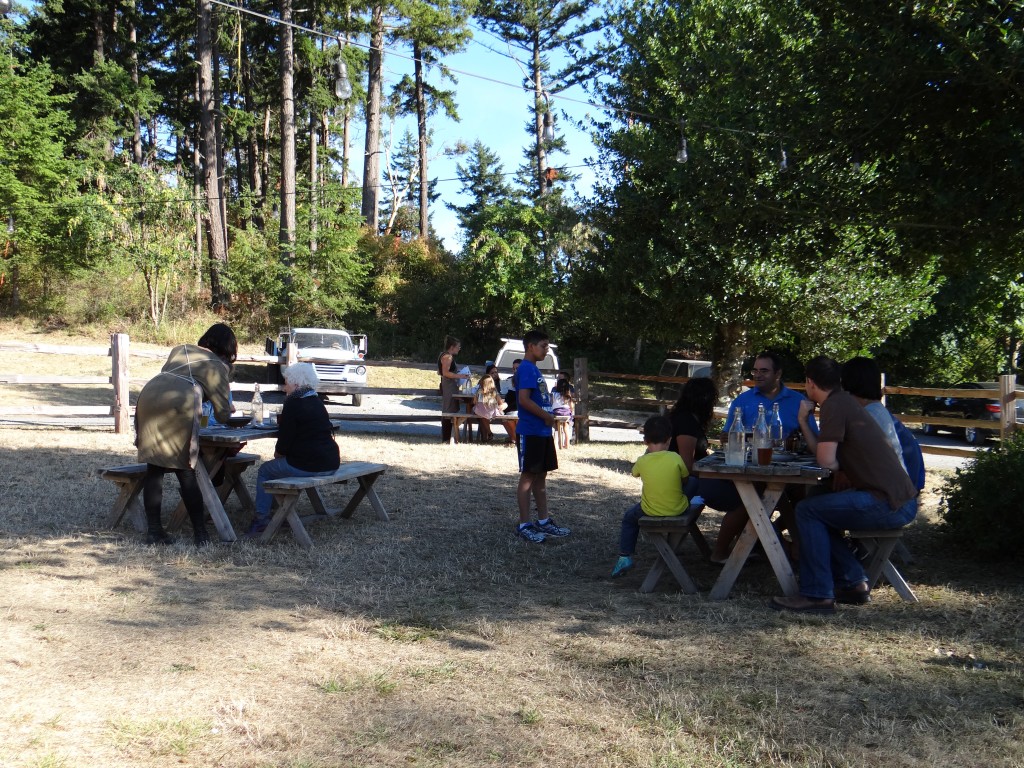 First off, it’s a shack. On an island. They have limited hours (they serve dinner on Thursday-Monday). They have a backyard with a fire-pit. There is wood everywhere. And fixed gear bicycles. They offer a $75 non-pizza tasting menu. Our tattooed waitress resembled Daria. Their pizzas have toppings like “hay smoked fresh cheeses” and “new onion” (I mean, who wants old onions?), and their menu boasts the following warning:

Being a construct of the soil as opposed to the delivery truck our menu changes weekly, often daily, dependent completely upon what the island and our farm can provide us.

Needless to say, I felt like I was on an episode of Portlandia.

Perhaps it seems that I am making fun of Hogstone’s and hipsters here. That’s not the case. I love hipsters and I love Hogstone’s. It’s just that every aspect of the restaurant embodied a particular subset of our culture to the greatest extreme. To be clear — I don’t think the owner of Hogstone’s sat down and said, “Hey — I want to open a hipster pizza place.” It’s just that the hipster ideals are reflected in the restaurant’s design, service, food, and so on. 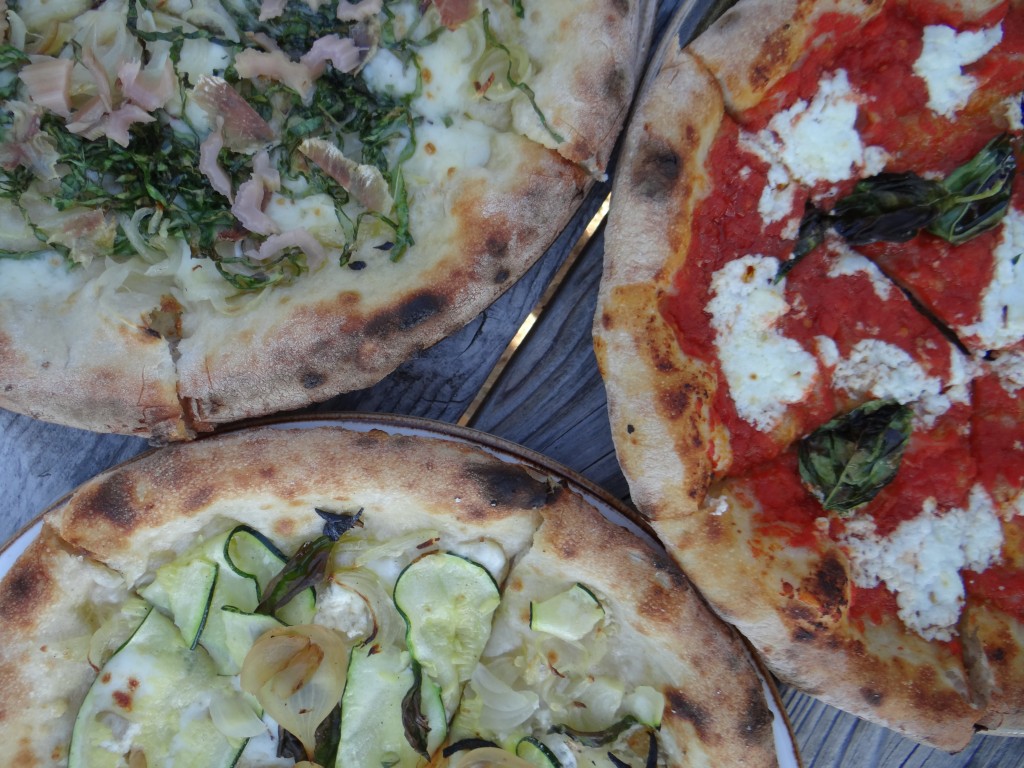 The pizzas were pretty good. The menu changes so often, you’re unlikely to see any of these pies if you go. Their website doesn’t even list pies. It just reads: Pizzas vary between $10-$20. I was most excited for a pie with cheese, squash, basil and onions. But this pie was a little disappointing. I love all of these ingredients, but the pie was a bit short on cheese. And the onions could have used some caramelizing. Next up, was a pie with pork, chard, onions, and cheese. This pie was better. Although, again, I would have liked some more cheese and some sweeter onions. The pork was sliced very thinly, and used sparingly.

My favorite pie was actually the most traditional, featuring sauce, cheese, and basil. Again — not enough cheese (does Hogstone’s have a cheese problem?). But the sauce was super tasty. Whereas the first two pies — which had no sauce — felt a little dry without a ton of cheese. The sauce compensated for that on the last pie. 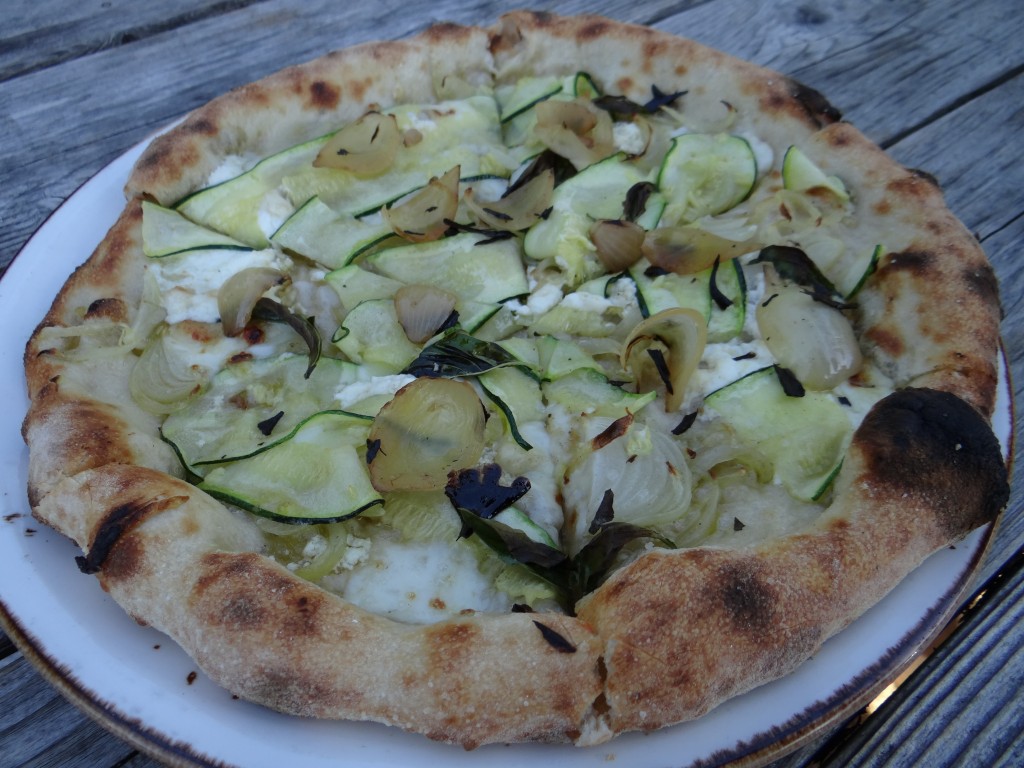 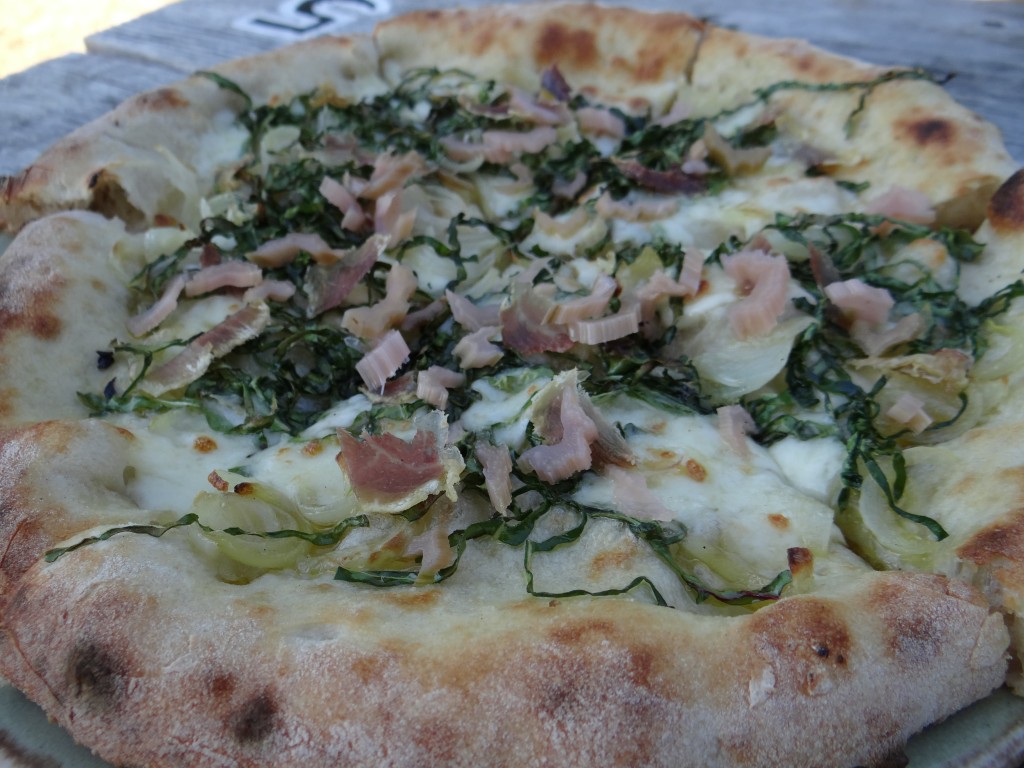 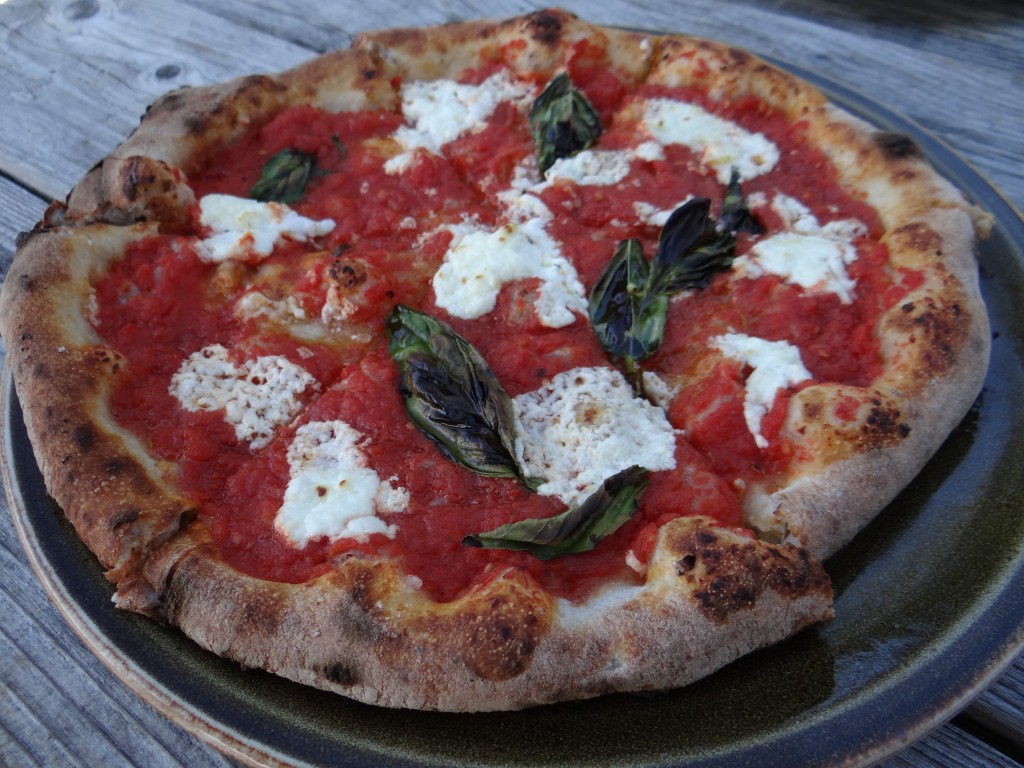 There are about five picnic tables in the backyard of Hogstone’s (although they could probably fit about 20). My friend and I were lucky enough to snag one, which is the best place in the house, if you ask me. I mentioned there was a fire-pit back there, but unfortunately there was a ban on outdoor fires in effect at the time.

There aren’t so many dining options on Orcas Island. In fact, the island itself is great for relaxing, but not much else. So if you’re there for a couple of nights, you definitely need to check out Hogstone’s. There isn’t much else to do + you can feel like you’re an extra in an episode or Portlandia.

Previous: Pizza With A View In Singapore
Next: Halloween 2015: The Top 10 Pizza Rat Costumes