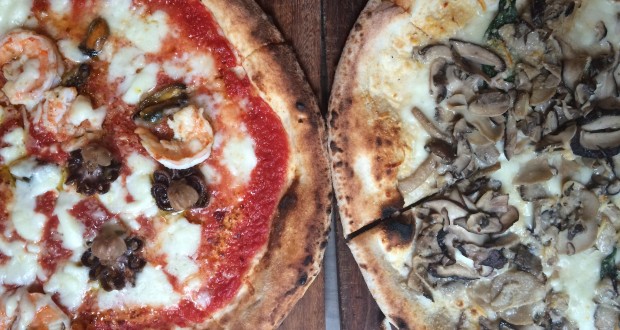 This September, I took my 5th annual trip to Asia, where I visited Hong Kong and Taipei. As with my prior trips, I made sure to try some pizza in each spot (check out some of my previous reviews from Thailand, Vietnam, Cambodia, China, Singapore, Malaysia, and Japan). So I’m no stranger to pizza in …

Summary : Hong Kong is not known for its pizza. And while this spot has some unique decor -- its pies are expensive and relatively standard.

This September, I took my 5th annual trip to Asia, where I visited Hong Kong and Taipei. As with my prior trips, I made sure to try some pizza in each spot (check out some of my previous reviews from Thailand, Vietnam, Cambodia, China, Singapore, Malaysia, and Japan). So I’m no stranger to pizza in Asia. And I’ve definitely had a range of experiences — from the delicious 4P’s in Ho Chi Minh City, Vietnam to the disappointing Girasole in Chiang Mai, Thailand. So I had what I would classify as “uncertain” expectations, prior to this trip.

The food in Hong Kong, which was under British rule until 20 years ago, remains heavily influenced by China. Yet there are plenty of Westernized dining establishments, probably even more so today as Hong Kong has solidified its status as one of the world’s most important business hubs. My research didn’t lead me to any universally regarded pizza spots. There is an outpost of New York City’s Motorino, but I didn’t really want to eat at a place that is also two blocks from my apartment. Ultimately, I settled on 208 Duecento (208 Hollywood Road) — an Italian spot in the hip Sheung Wan area which contains a mix of old school storefronts and more modern looking shops. 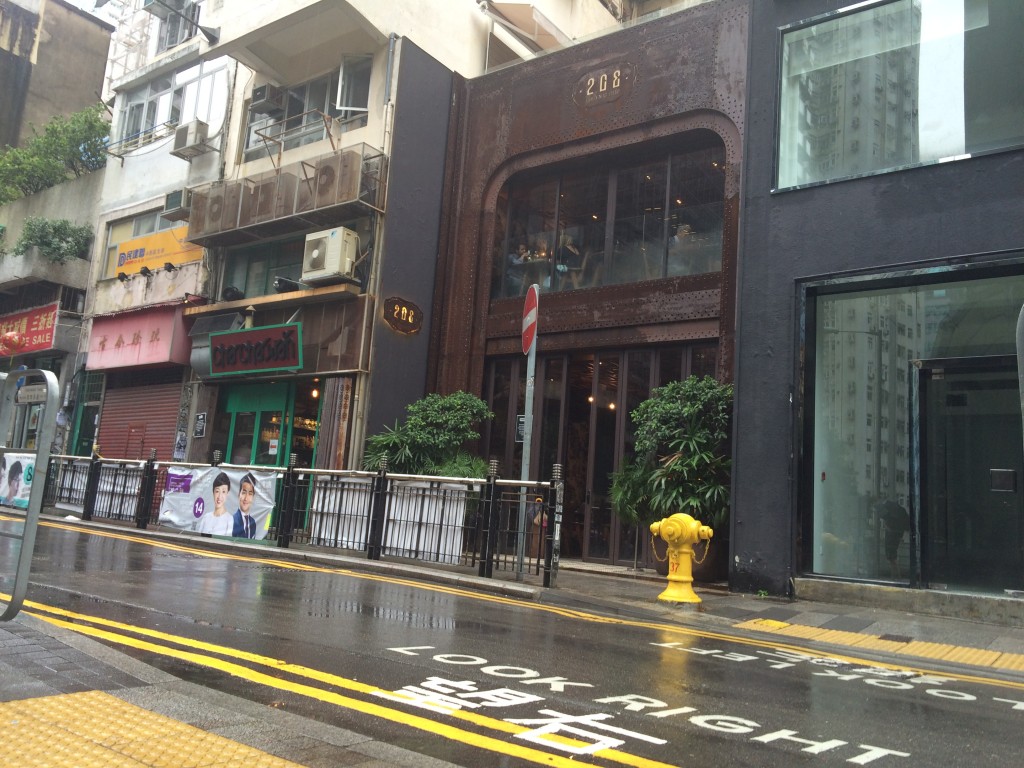 208 Duecento is one of those newer establishments — which is clear from its exterior of exposed metal. However it fits in well with its surroundings and when you enter the space you’ll find a mix of modern amenities contrasted with decorations that reflect Hong Kong’s Chinese influence. 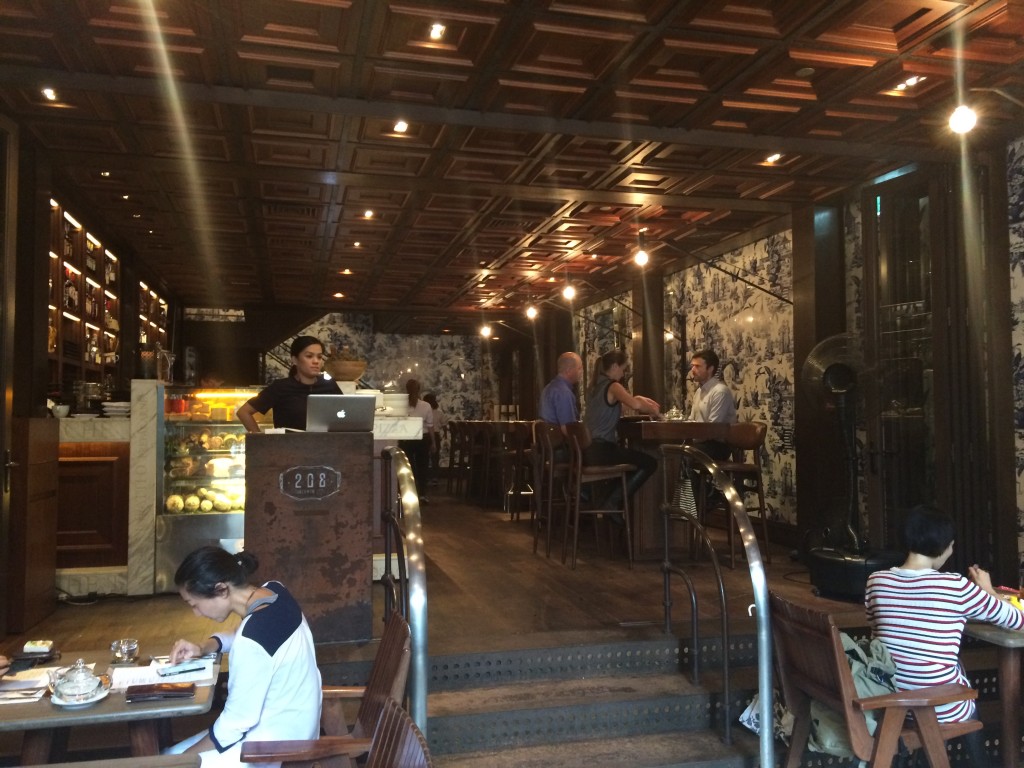 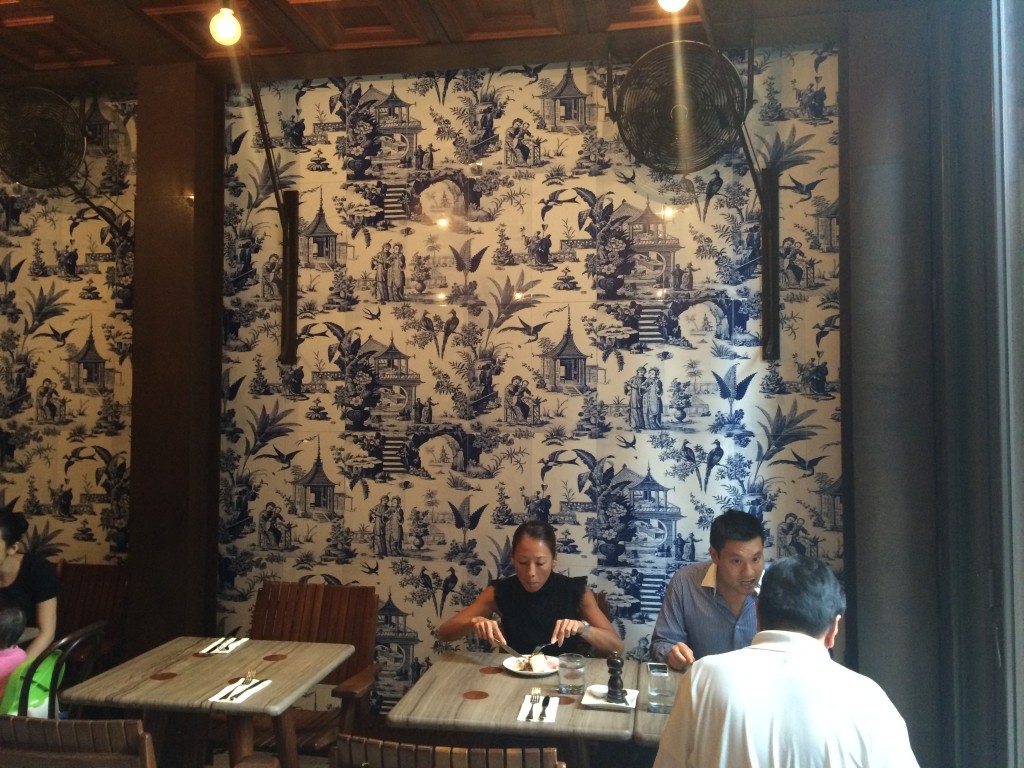 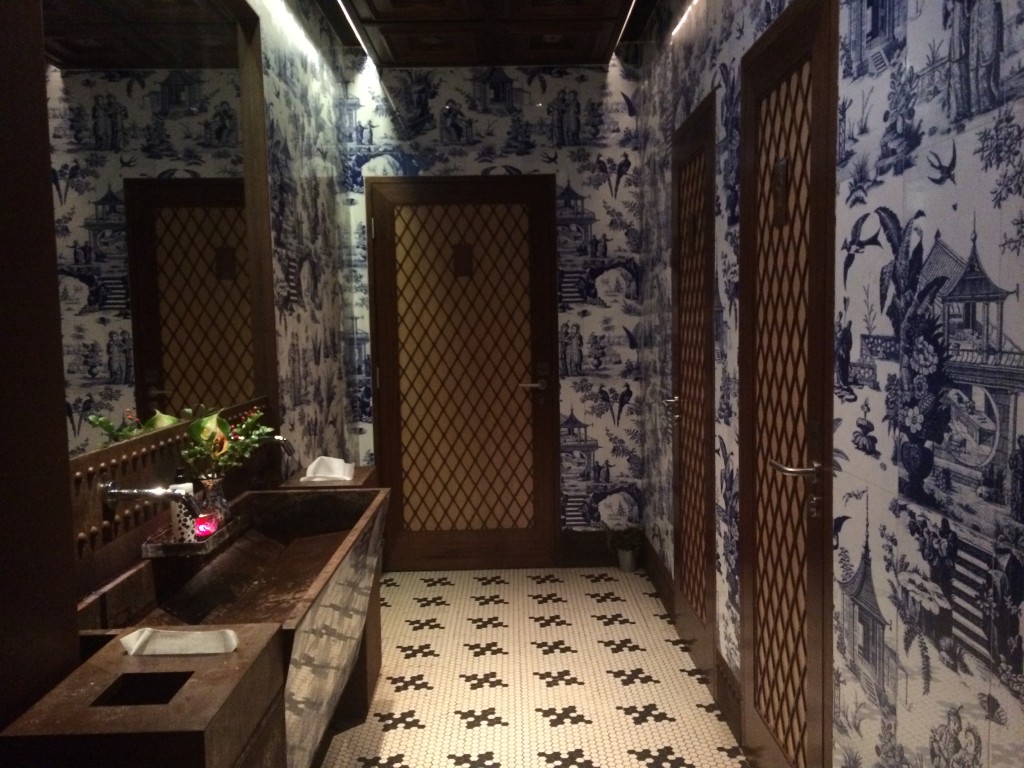 The restaurant is an incredibly spacious, bi-level establishment, with multiple seating areas. At lunch time on a Tuesday, there were only a handful of tables occupied. The restaurant offers a number of lunch specials including an antipasti buffet paired with pasta or pizza offerings. My friend and I ordered off of their regular menu which features 12 pizzas priced between $178 HKD and $208 HKD — which comes out to between $23 and $28 per pie. Very expensive! In Hong Kong, as with many foreign countries, the tax and service charge are already baked into the price. But even so, these prices would make 208 Duecento one of the most expensive pizza places in New York City.

Most of the pies had pretty standard toppings — comparable to what you might find at an upscale pizza place in New York City or Italy. Although there was a “Salmone Affumicato” pie with mozzarella, smoked salmon, horseradish, creme fraiche and black olive. It sounded interesting, but we didn’t get it. Instead we went with a “Pescatore” (tomato, mozzarella, baby octopus, prawn, and mussel) and a “Quattro Funghi” (mozzarella, four kinds of mushrooms, basil). Yes — the menu actually says “four kinds of mushrooms” without specifying what they are. 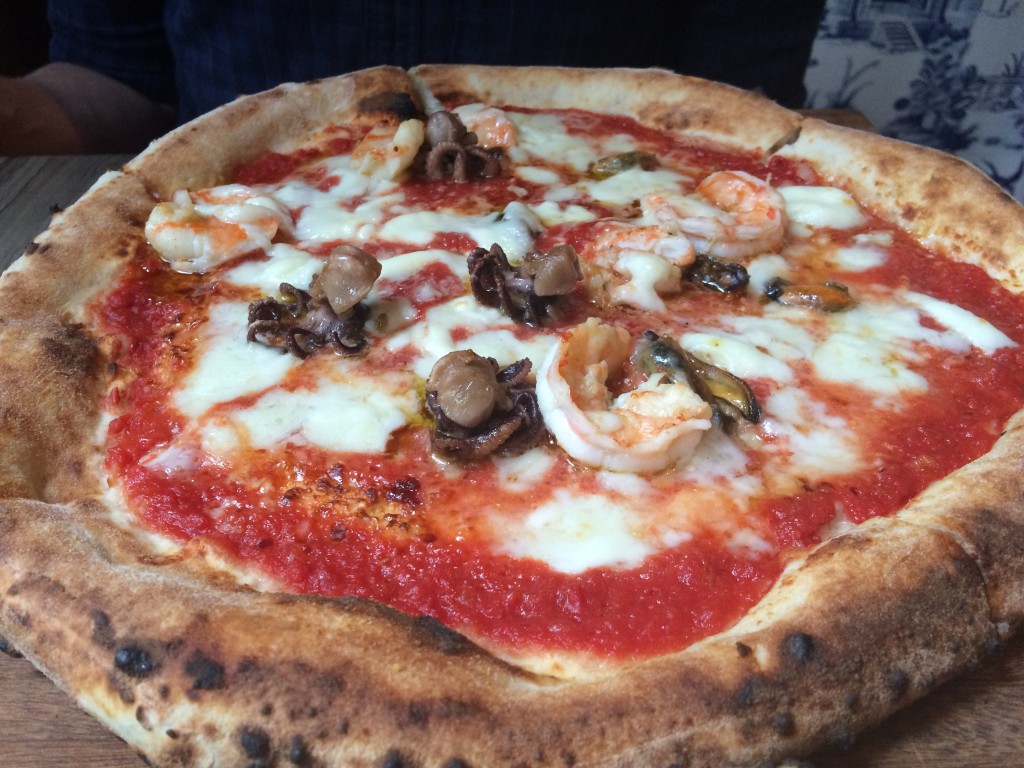 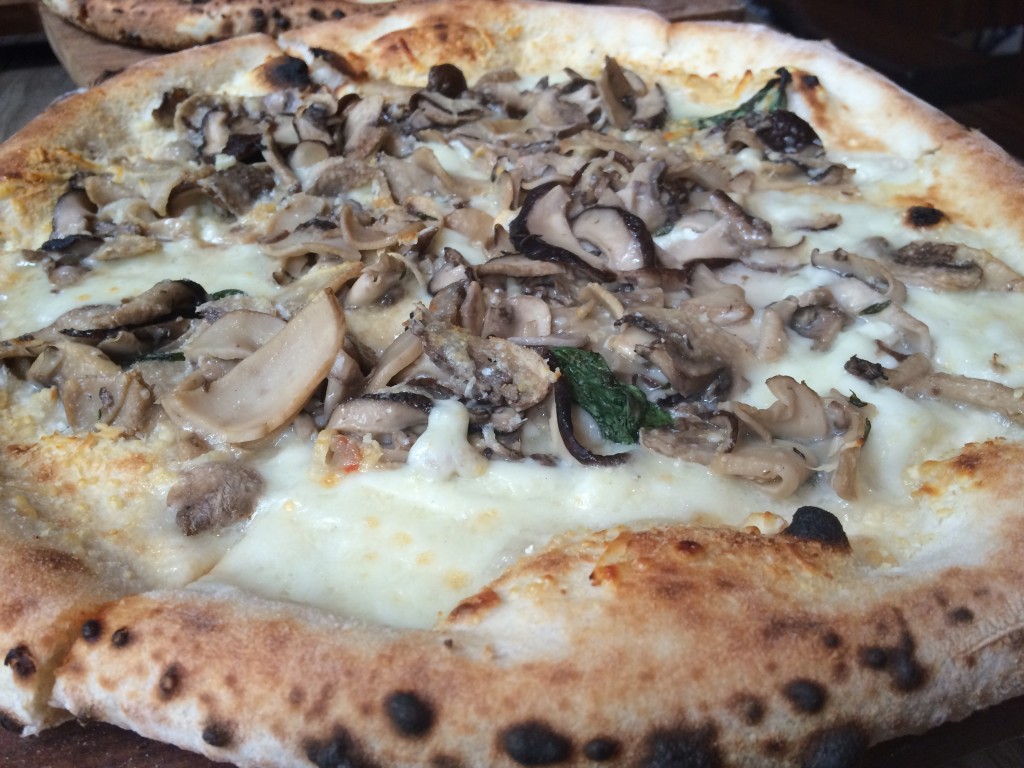 I wasn’t particularly excited about the Pescatore, since I’m not a huge seafood fan. But my friend really wanted to get this pie, so I obliged. There was so little seafood on this pie, that it was easy to pick off. You’re left with what is essentially a margherita. It was pretty good although there was nothing particularly distinguishable about it. The other pie — with the mystery mushrooms — was also good. It tasted like a typical mushroom pizza. The basil was essentially just a garnish. Were both these pies tasty? Sure. Were they worth $23? Probably not. Do you know how many bowls of noodles you can eat in Hong Kong for $23?

Other than the decor, my favorite part about 208 Duecento was that they serve their pies on slabs that look like pizza peels. No plates for your pizza! I’ve never seen this concept before, but I liked it. 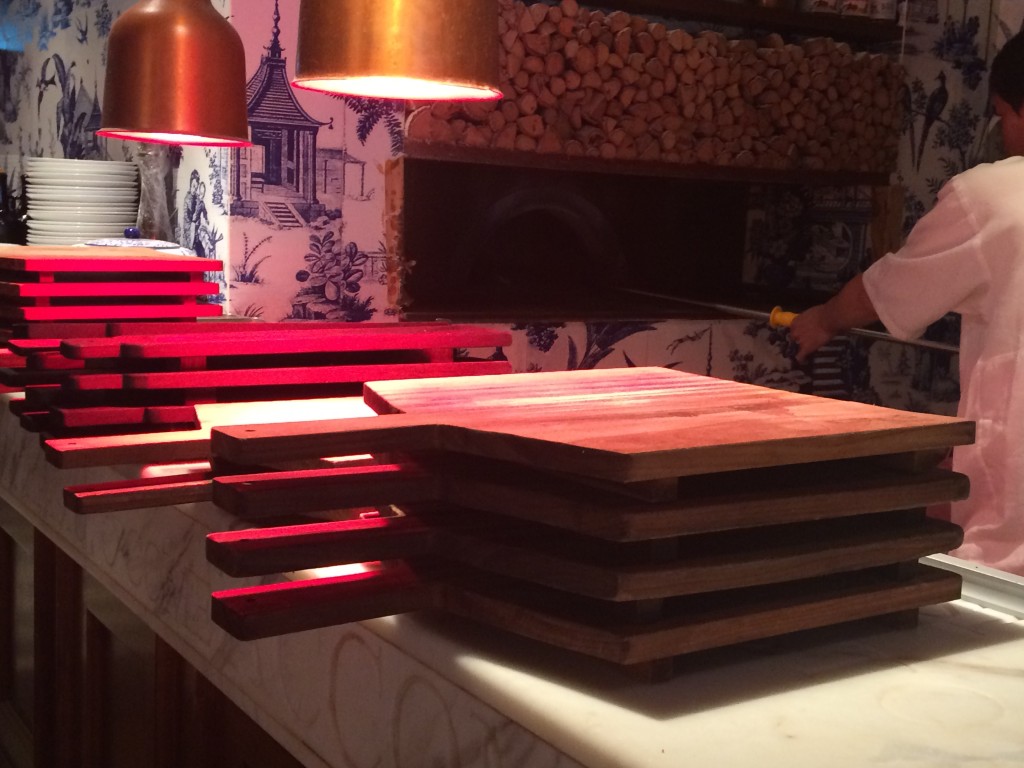 208 Duecento is definitely a spot that caters to expats and Westerners. If you’re spending a while in Hong Kong or you’re desperately craving some pizza, it could be worth your while. But there is so much other good food in Hong Kong, I would not recommend it, if you are short on time there.