As the sun set over New Haven, Pizza Club’s day trip was coming to a close. But before we headed back to New York, there was one more place we had to try: Modern. Our first stop of the day was at Frank Pepe, which was followed by Sally’s. Even though our stomachs were full, it was imperative that we dined at Modern in order to complete the New Haven pizza trifecta. When we had arrived at Frank Pepe’s at noon, I was eager to down as many slices as I could. I’d been awake for three hours and was anxious to get some food in my stomach. The exact opposite was true at Modern. Please… no more pizza – I thought to myself. However, once we entered the place, I was able to rally myself. This all looks delicious! 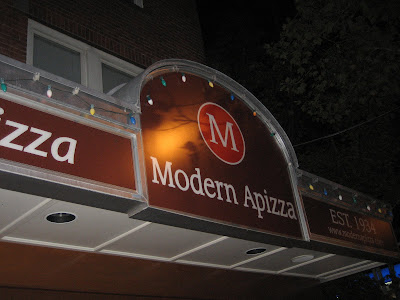 I do think it’s true that it is impossible to accurately rate a pizza place after you’ve already been eating pizza elsewhere for seven hours, and I might have had a completely different feeling about each place had we visited them in a different order (I might add that I practically starve myself every time I make the trip out to Di Fara, which might inflate my ratings from amazing to heavenly).

Modern, established in 1934, reminded me most of a New York City pizza place — it had a bit more of an upscale feeling than the previous two spots. But once again the prices distinguished itself from places in the city. Large pies ranged from $12 – $22 and the most expensive small pie was $12. There were six of us left at this point and we decided on one medium Italian Bomb (with bacon, sausage, pepperoni, garlic, mushroom, pepper & onion), one medium plain pie (1/2 with pepperoni), and one mozzerella pie (1/2 with mushrooms).

I’ll be honest. Much of my dining experience was a blur. I was full, a little drunk, and exhausted. I didn’t try The Bomb, and I remember the mushroom pie being solid. I’m not a huge topping guy when it comes to pizza, but mushrooms are my favorite add-on followed by onions. This was the first mushroom pie of the day we’d ordered, and I’d love to go back and try mushroom pies at the other two places. The plain pie didn’t live up to that at Sally’s, but there was more cheese on this one. The pie at Sally’s was essentially tomato sauce on crust.

Unlike the first two places, Modern had a number of non-pizza menu items including Baked Ziti, Manicotti, and Eggplant Casserole. I never understood ordering these types of items somewhere that’s known for it’s pizza — but it’s an option for those who are interested.

If there’s one conclusion I’d like to draw from this whole experience it’s the following: No place in New Haven would crack the list of my top 10 favorite pizza places in the city, but that would be holding New Haven to New York’s pizza standards. New York is the pizza capital of the world. We have world class pizzaiolos, Dom DeMarco, and a pizza scene that is constantly looked at under a microscope — being critiqued, criticized, and praised on a minute by minute basis.

New Haven is not in the spotlight. And even though it’s pizza is famous… at heart, New Haven is a small town. And for that reason, the pizza there should be compared with that of other small towns. I grew up in Rockville, Maryland and the pizza in New Haven is as good as, if not better, than the pizza we had there (of course, I do have some hometown bias). I remember visiting my sister in St. Louis last year and the pizza was better than what I had there. It was even better than the pizza I had in Toronto last month. Living in New York City has given me overly high expectations of pizza.

It’s hard to beat New York. And I understand that every time I eat pizza elsewhere, especially when drawing conclusions about how those places compare to New York. But New Haven is and always will be known for the iconic pizza it serves. And I’m sure pizza lovers will continue to make the journey out there for years to come, just as Pizza Club did. It’s definitely worth the trip. But if you’re coming from New York: beware. Lower your expectations and you’ll be pleasantly surprised.

Here are some photos of Modern: 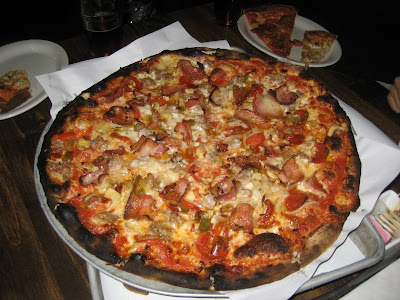 Medium Mozzerella Pie
(with 1/2 mushrooms)
Plus a lucky bubble! 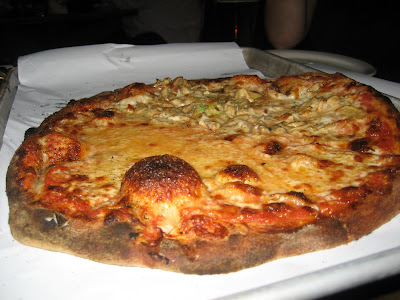 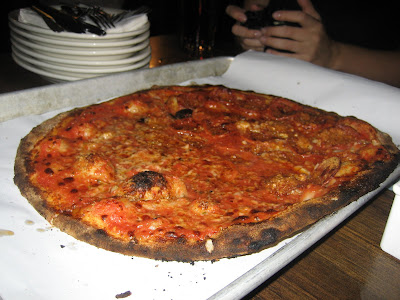