K! Pizzacone: "Pizza" On The Go

K! Pizzacone (325 5th Avenue) is a quirky — and perhaps slightly over hyped — new spot in Midtown that serves pizza in a cone. It’s opening last month was covered by the likes of nearly every NYC food blog (see Slice, Midtown Lunch, Gothamist, Grub Street and Eater). Was all of the attention warranted? Probably not. But it’s not surprising given that the opening of every new eating establishment is treated like the birth of a first born child.

Here’s the thing with K! Pizzacone — it’s pretty tasty, but I don’t really consider it pizza. It’s more like cheese in a breaded cone. I typically have a very lenient definition of pizza (i.e. a crepe with tomato, mozzarella, and basil), but I can’t seem to convince myself that what K! Pizzacone actually serves is a form of pizza. But definitions aside, here’s what I thought of whatever it was that I actually ate:

1) The space is very tiny. There’s almost nowhere to sit inside. So it essentially acts as a takeout place. There are a few stools, but during lunch when it’s crowded it can’t possibly be comfortable to sit there. 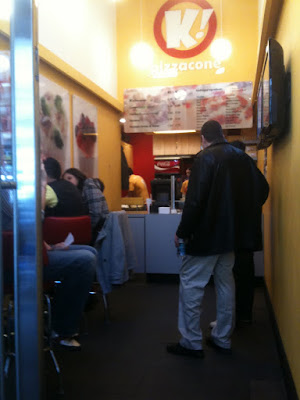 2) They are slow. This is both good and bad. On one hand, it’s nice that every cone is made to order. But on the other hand, you encounter a very long wait — not fun in such close quarters. Ideally they’d find a way to speed up the process while still maintaining the quality of their product. After all, nobody wants to eat a reheated pizza cone. 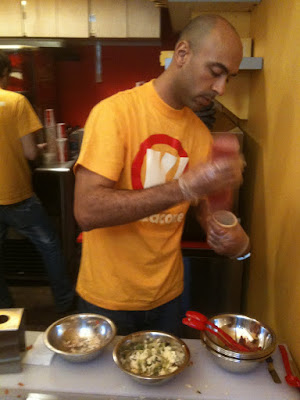 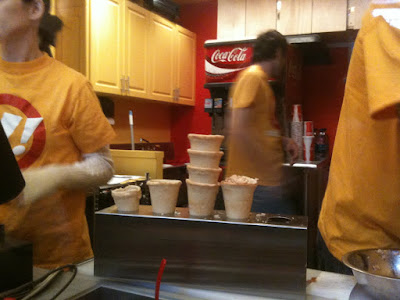 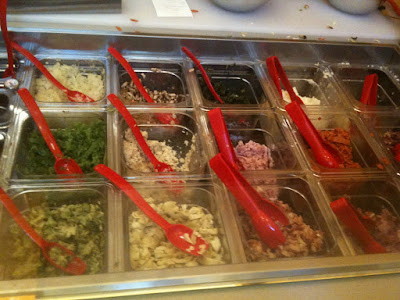 3) It’s a little pricey. Two small pizza cones are required to fill a moderate appetite and one large pizza cone doesn’t quite do the trick (while two large cones might be over doing it). Two small cones with a soda + tax comes out to about $9.00. Although this isn’t so expensive for a filling lunch, it is expensive for pizza. Elsewhere you can get two slices and a soda for about half that price, so it is a bit of a splurge. 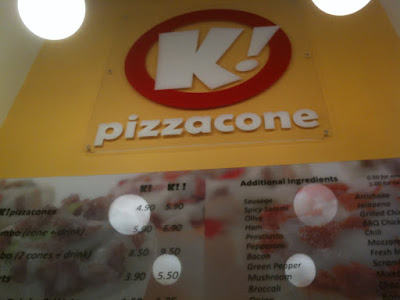 4) The eco-friendly aspect. Well there really isn’t one. Each cone comes individually boxed with more wrapping than a Christmas present. While the presentation is great, it’s a complete waste. And since nearly every cone is ordered to go, I can’t imagine how much packaging they go through in a day. Maybe if they get rid of the packaging, they can cut their prices a little and everyone will go home happy. 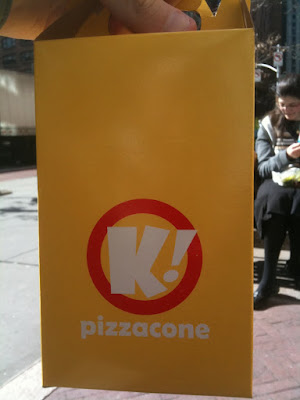 The food itself was good. All of the ingredients are very fresh and you can watch your cone made which is pretty cool. But I wouldn’t rush back there. It did satisfy my lunch needs on a given Tuesday though.

I ordered a one plain tomato and mozzarella cone and one with mushrooms. I will say that they could have gone a little heavier on the mushrooms. They were spread few and far between throughout my cone. Not only would I like to have seen more mushrooms cooked into the cheese, but some sauteed mushrooms on top of my cone (which is inverted or concave, rather than convex) would have been nice. That is, the cheese doesn’t come out of the cone, but rather there is room between the cheese and the top of the cone for a topping. 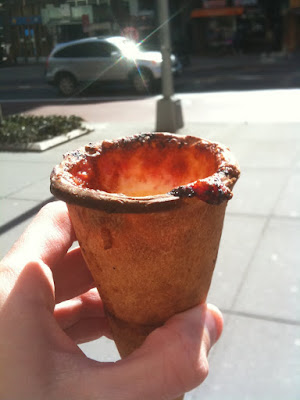 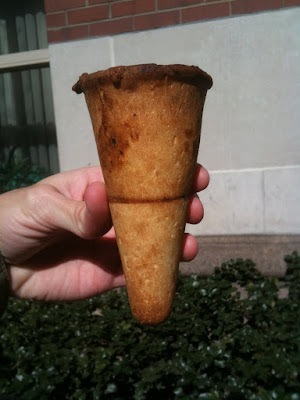 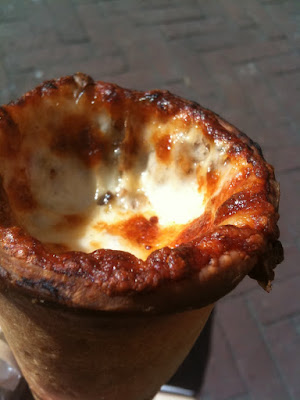 The cones are less messy to eat than a greasy slice of pizza. But not necessarily less messy than a slice that’s held together well. Picture a pizza cone like an ice cream cone. If you bite into an ice cream cone, sometimes the ice cream starts to drip out. Same with the pizza cone. A bite might result in some cheese leaking out. My friend also noted that the cheese at the bottom of his cone was scolding hot when he got to it. I didn’t notice that on mine, but I guess hot cheese in a cone doesn’t allow for the same cooling process as an exposed slice.

Bottom line: A little pricey. But still tasty. If you want something that is a cool spin on pizza, check it out. If you like it, go back. But if not, you’re better off a few blocks away at Pizza 33 (489 3rd Avenue).