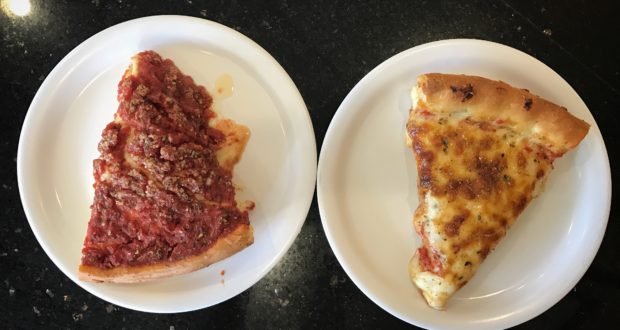 In Chicago, Deep Dish By The Slice At Art Of Pizza

In Chicago, Deep Dish By The Slice At Art Of Pizza

During a recent road trip I took to the South and Midwest, I made a number of stops along the way for pizza. Stop #1 was Five Points Pizza in Nashville, Tennessee, followed by Garage Bar in Louisville, Kentucky. Which brings us to… Chicago. Land Of The Deep Dish Pie. It had been seven years …

Summary : This non-descript shop sells an assortment of deep dish pizza by the slice. Get a stuffed slice with the sauce on top.

During a recent road trip I took to the South and Midwest, I made a number of stops along the way for pizza. Stop #1 was Five Points Pizza in Nashville, Tennessee, followed by Garage Bar in Louisville, Kentucky. Which brings us to… Chicago. Land Of The Deep Dish Pie.

It had been seven years since I was last in the Windy City, so I was excited to return. I’ve previously reviewed deep dish pies at Pequod’s and Lou Malnati’s (in addition to the non-deep dish pies at Spacca Napoli and the short lived Great Lake). This time around I was only in Chicago for 48 hours and it didn’t feel right to leave without having some more deep dish pizza. After a bit of research I settled on Art Of Pizza (3033 N. Ashland Avenue). 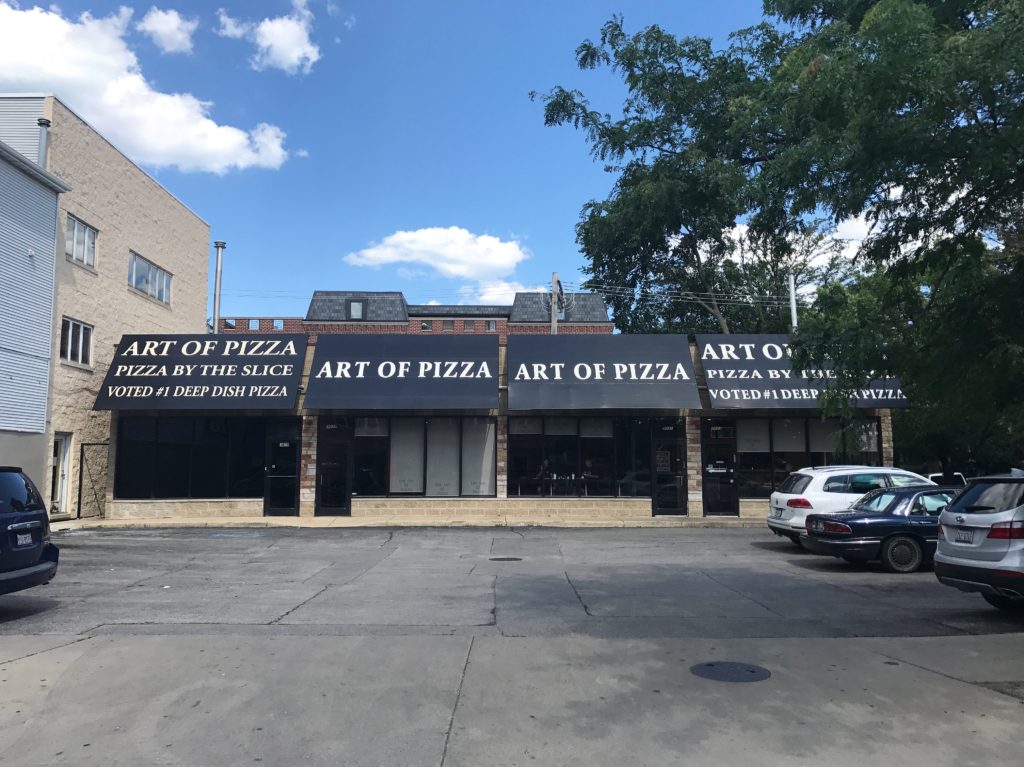 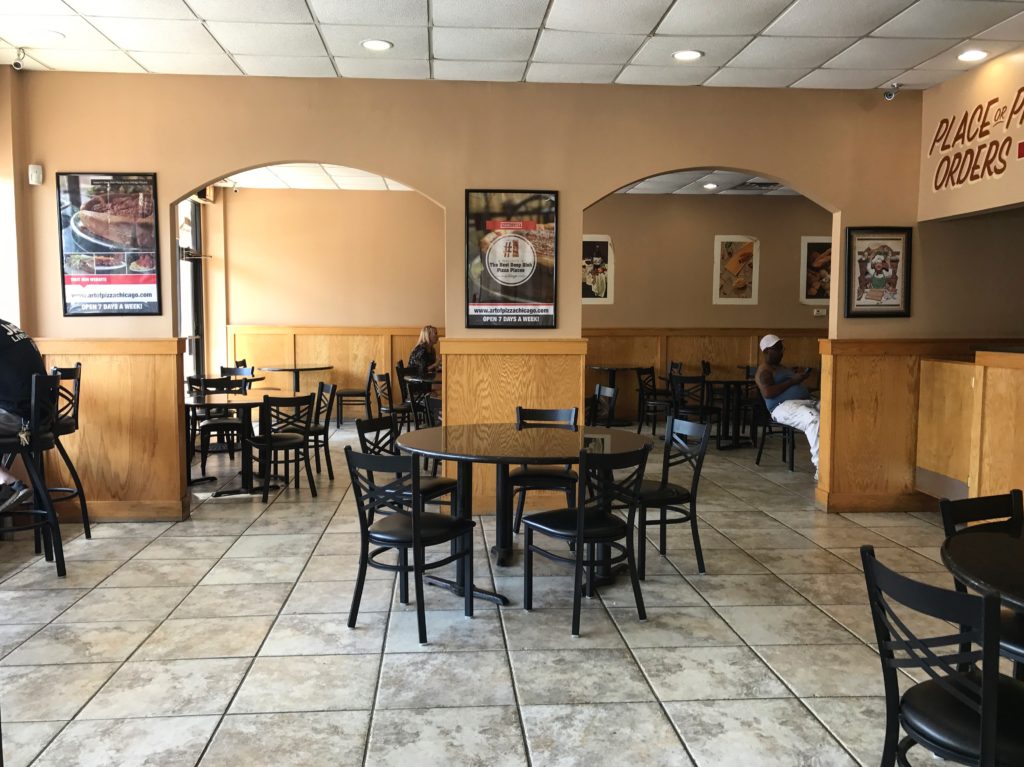 I’m not going to spend time ranting on about whether or not deep dish should be considered pizza (but FYI, I do), or whether or not it’s inferior to other styles of pizza. But one thing I think we should all be able to agree on is that the desire to eat deep dish pizza is a separate craving from that of other pizza styles. And unfortunately, for deep dish lovers, that’s not a craving that can be satisfied instantaneously. Deep dish pizza can take upwards of 30 minutes to prepare, whereas a Neapolitan pie cooks in about 90 seconds. And most places that serve deep dish pizza only serve whole pies that need to be custom ordered. But that’s not the case at Art Of Pizza where they specialize in slices. In my book, that already gives Art Of Pizza a leg up on the competition.

You see… one of my qualms about deep dish pizza is that its so filling. I always feel full and bloated after eating it. But a single slice of deep dish pizza? Now that seems like a more reasonable quantity. Art of Pizza has a half dozen pre-cooked pies that you can order a slice of and they’re just $3.95 each. They come in two “styles” of deep dish: pan and stuffed (technically they also service “thin” pies, but who goes to Chicago for that?). 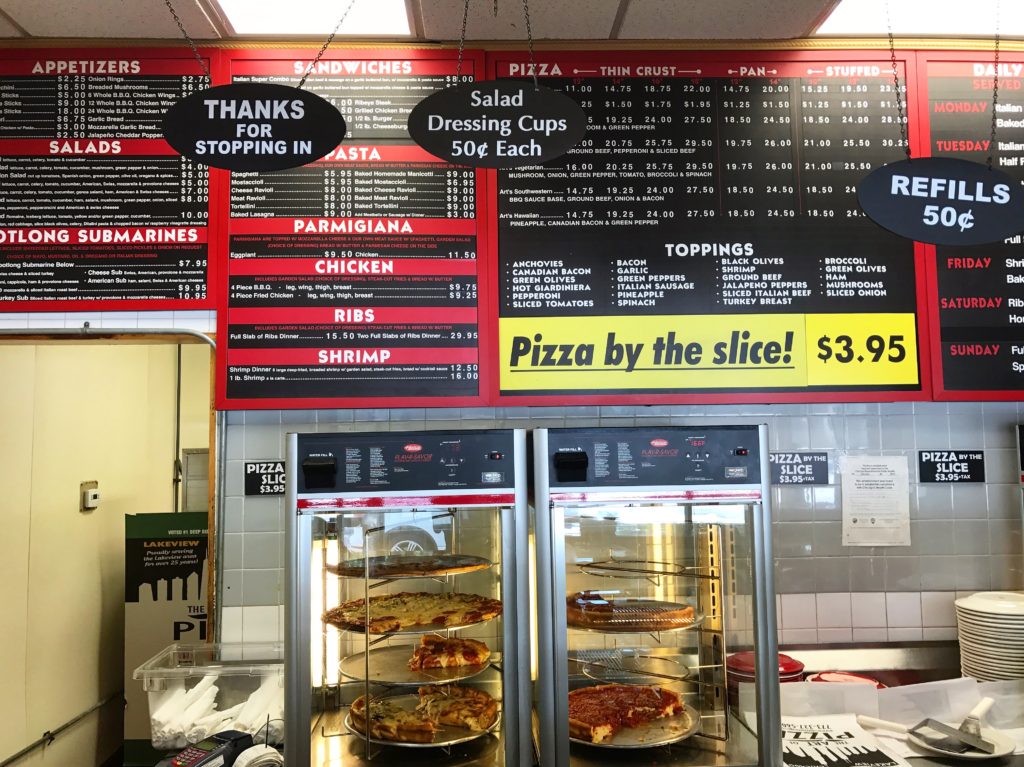 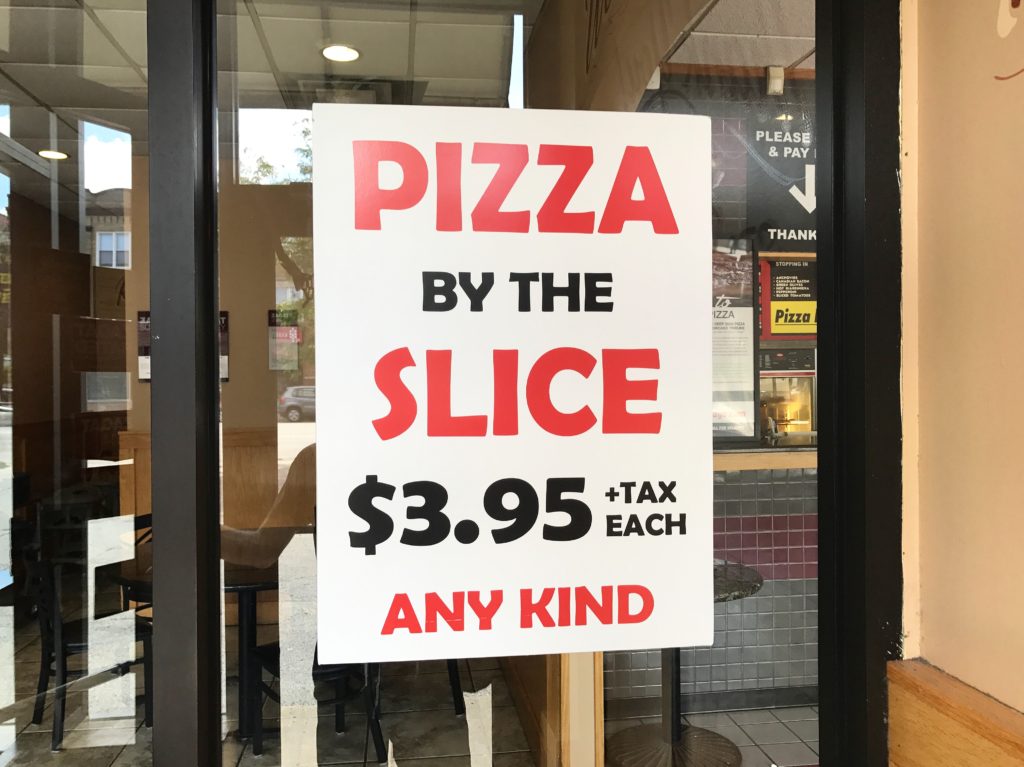 Most of the pies contain a standard assortment of toppings (or, ehem, fillings). There is one, for example, with sausage, onions, mushrooms and green peppers. Another has a sauce base with ground beef, onions and bacon. There are two vegetarian pizzas on the menu: a simple pie with cheese and sauce and another with mushrooms, onions, green peppers, tomato, broccoli and spinach. Another qualm I have about deep dish pizza is that it’s often served with too many toppings. It’s already filling enough before dumping loads of meats and vegetables in/on it.

So at Art of Pizza, I kept things simple. I ordered one slice of pan cheese pizza and one slice of stuffed cheese pizza. They were both pretty good, but I preferred the stuffed, which has its sauce on top. The highlight was definitely the red sauce which engulfs the stuffed slice. A delicious combo with the cheese and crust underneath. Simple and full of flavor, this was one of my favorite deep dish experiences. 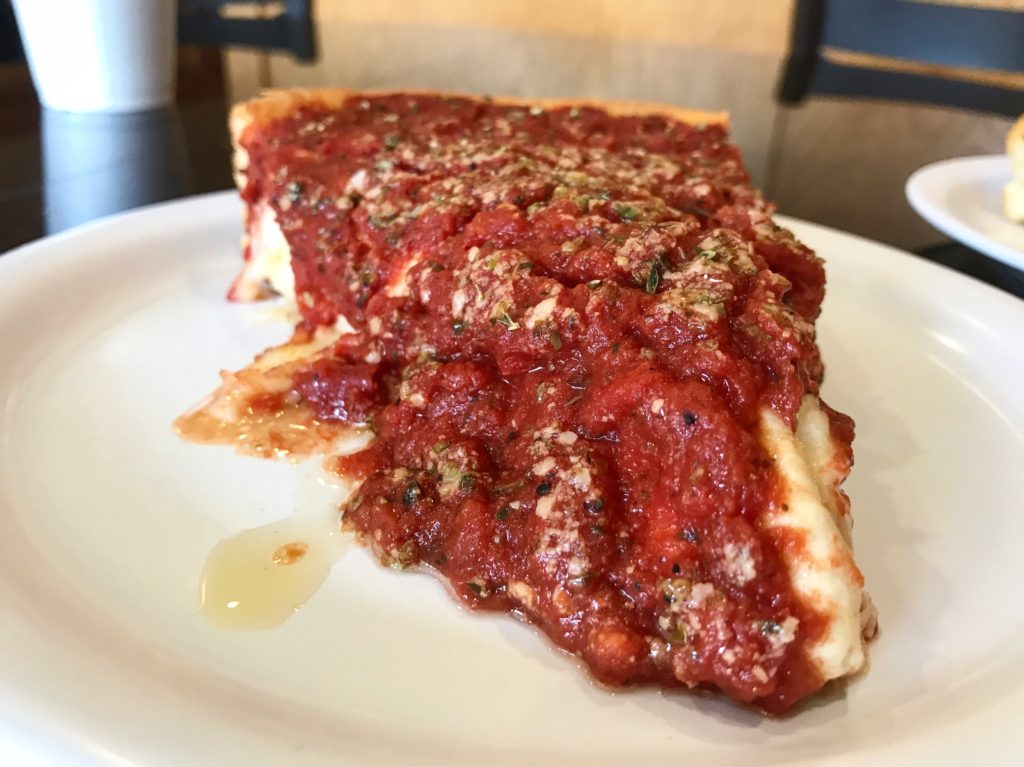 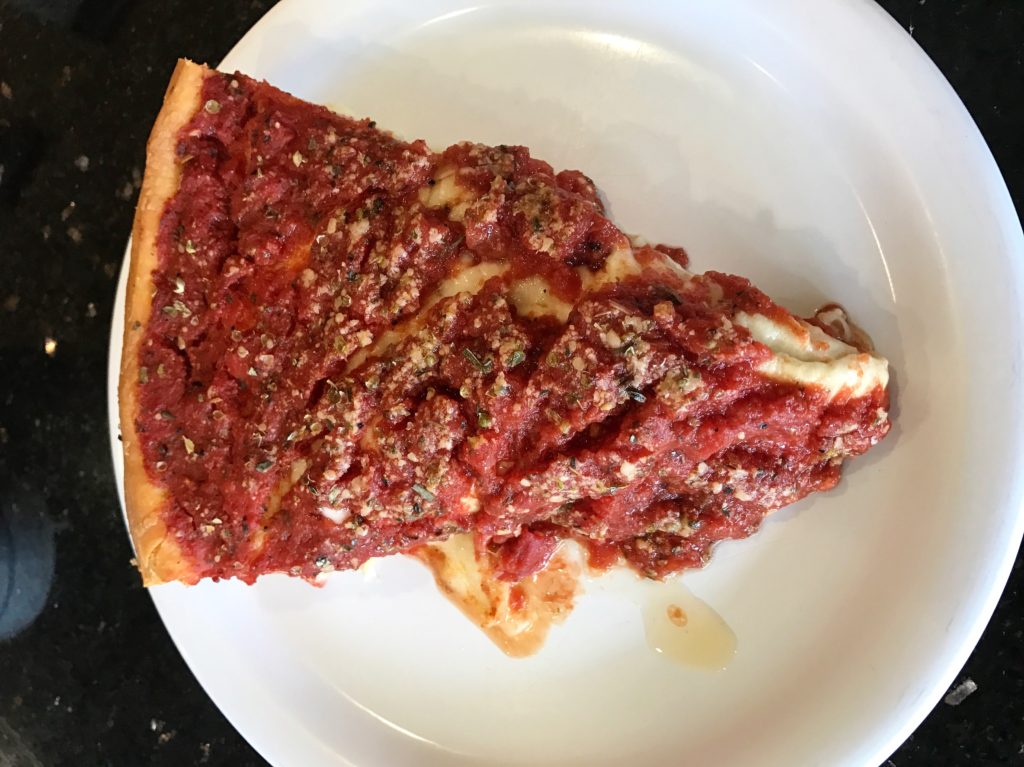 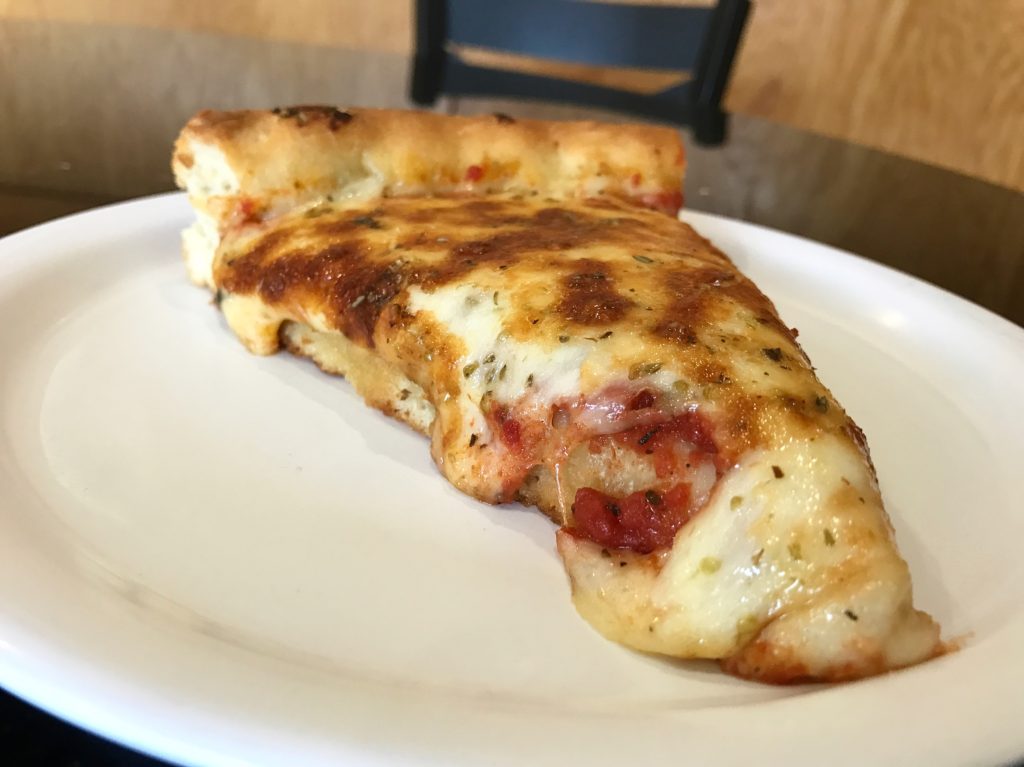 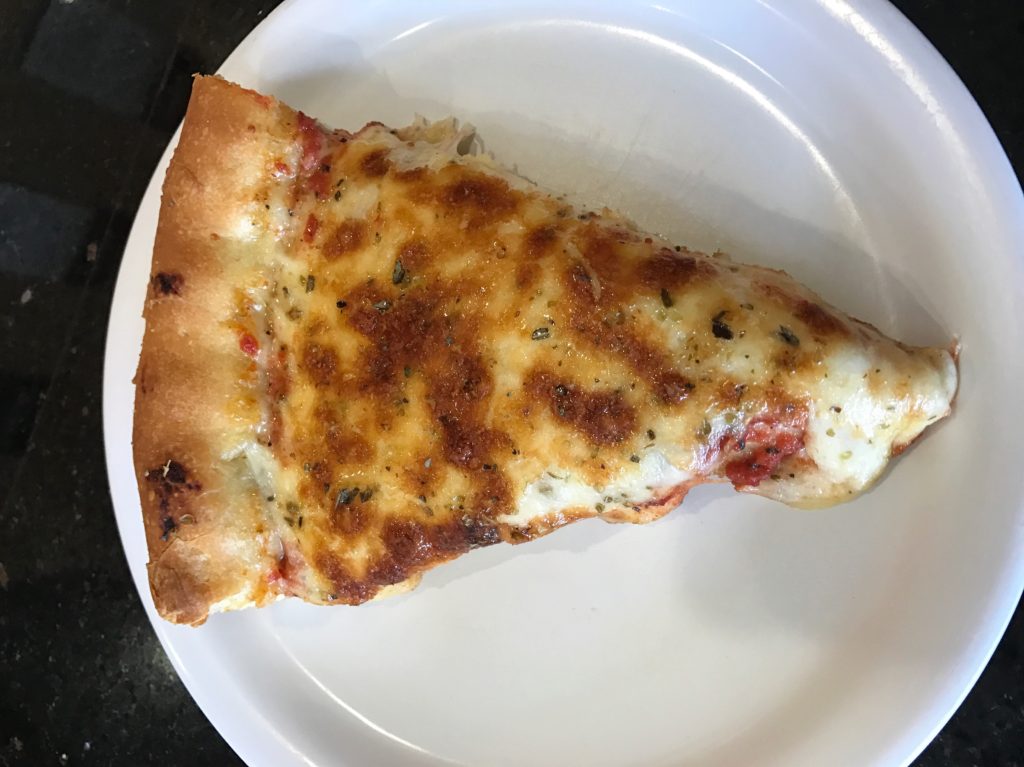 I’m not someone who loves deep dish pizza. But from the moment I arrived in Chicago, I was genuinely looking forward to having some. Would I eat it on a weekly or monthly basis if it were prevalent in New York? Probably not. But because I only eat it every couple of years, it remains a treat. And because Art of Pizza serves deep dish slices, I was even able to try a couple variations, something that you can’t really do when only full pies are available (at least without a big group). There aren’t too many voids in the NYC pizza market, but one of them is a slice shop that serves deep dish pizza. It works in Chicago and I see no reason is can’t work elsewhere too.

Previous: Traditional Neapolitan Pies In Kyoto @ Pizza Mercato
Next: At Garage Bar In Louisville, Pizza In A Former Gas Station