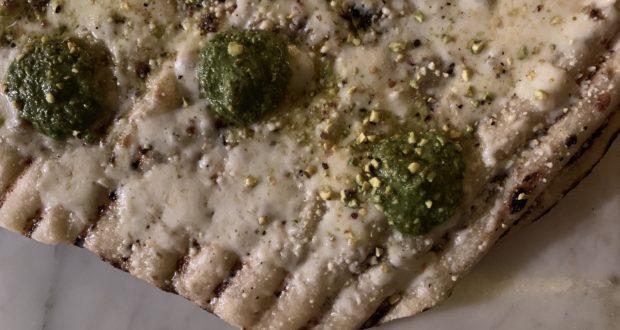 Have you ever had grilled pizza before? If your answer is yes, then there is a good chance it was pizza that someone made for you on their home grill. But it’s unlikely that it resembled the phenomenal grilled pizza that’s currently being served at Violet (511 East 5th Street), the latest restaurant from the …

Have you ever had grilled pizza before? If your answer is yes, then there is a good chance it was pizza that someone made for you on their home grill. But it’s unlikely that it resembled the phenomenal grilled pizza that’s currently being served at Violet (511 East 5th Street), the latest restaurant from the team behind Emily and Emmy Squared. Those two namesake spots I would consider to be pizza places that happen to serve some other notable dishes (like the well regarded Emmy Burger and Spicy Chicken Sandwich). The original Emily restaurant in Clinton Hill has 16 pizzas on its menu, while Willamsburg’s Emmy Squared outpost boasts 13 Detroit-style pies. But Violet offers a much more concise pizza menu — just six pies, served alongside a dozen other dishes including pastas and salads. It’s a restaurant that happens to serve some delicious grilled pizza. And you should try as many of them as possible. 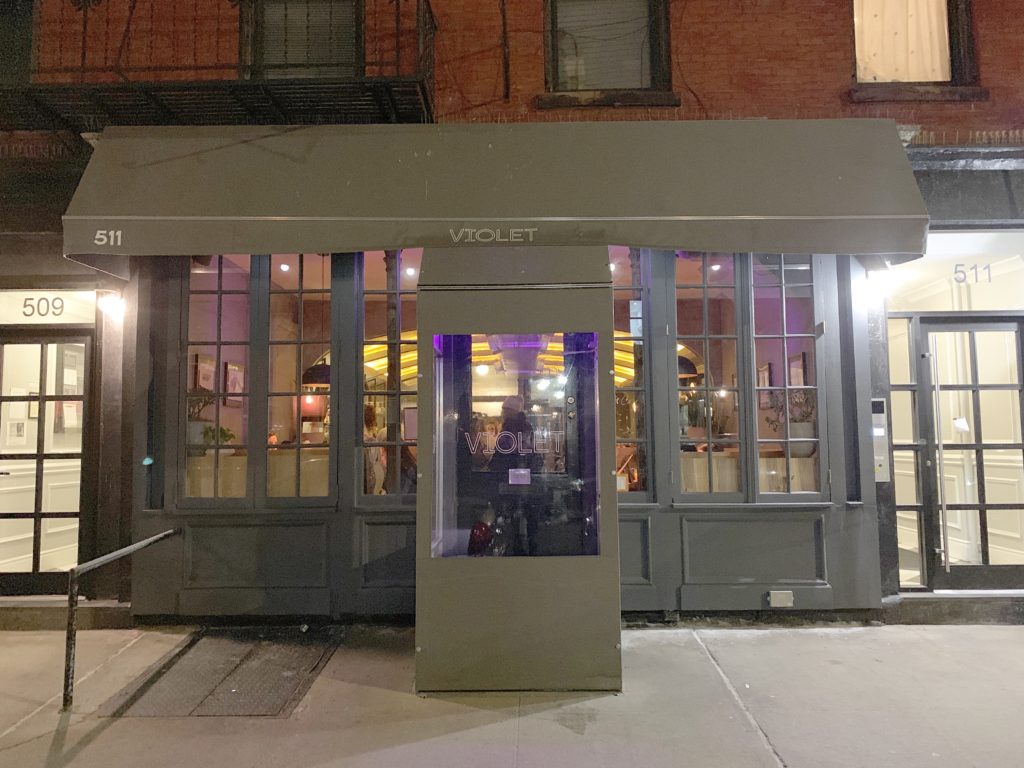 The space itself (which previously housed GG’s, another pizza spot) is not particularly spacious. You can fit about 40 diners between the bar, chef’s counter, and tabletops. And the restaurant utilizes what feels like every square inch. In fact, trying to squeeze in and out of the tiny gaps between tables is part of the adventure of dining at Violet. I know that every additional two-person table could bring in upwards of $100,000/year (based on three seatings per night and an average check of $100 per couple), but removing just a single table from the back seating area would provide a more comfortable dining experience for everyone there.

The most notable design element in the restaurant is a wall of mirrors, which provides the illusion of a larger space. But what the restaurant might lack in ambiance, it makes up for with its delicious food. 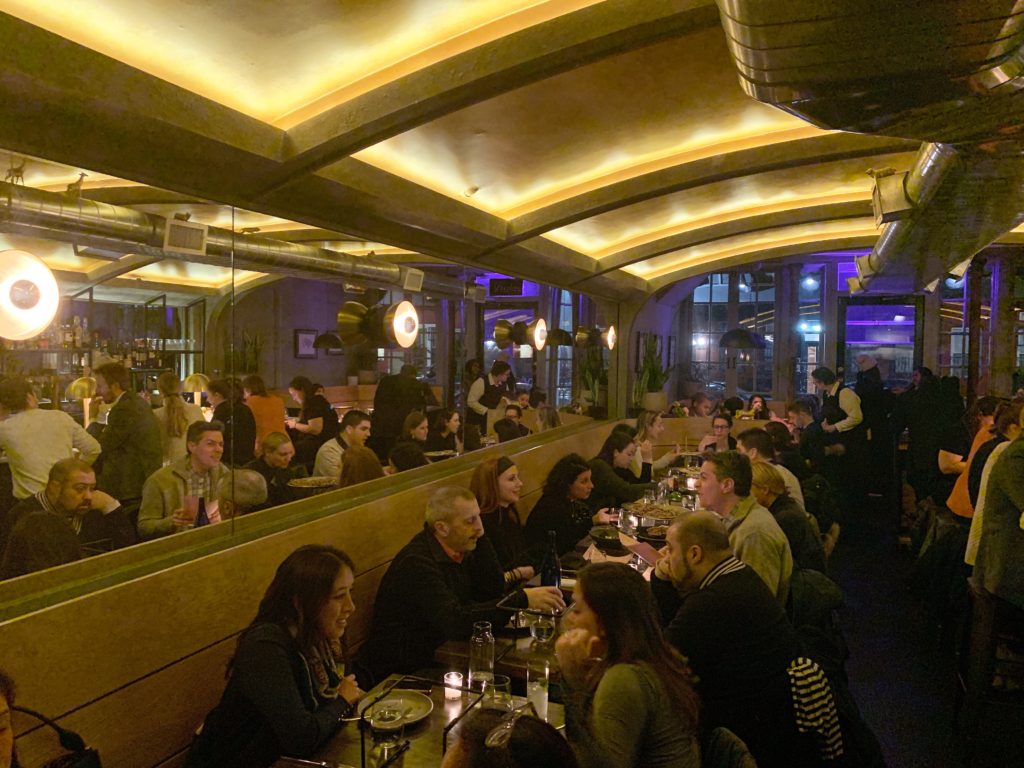 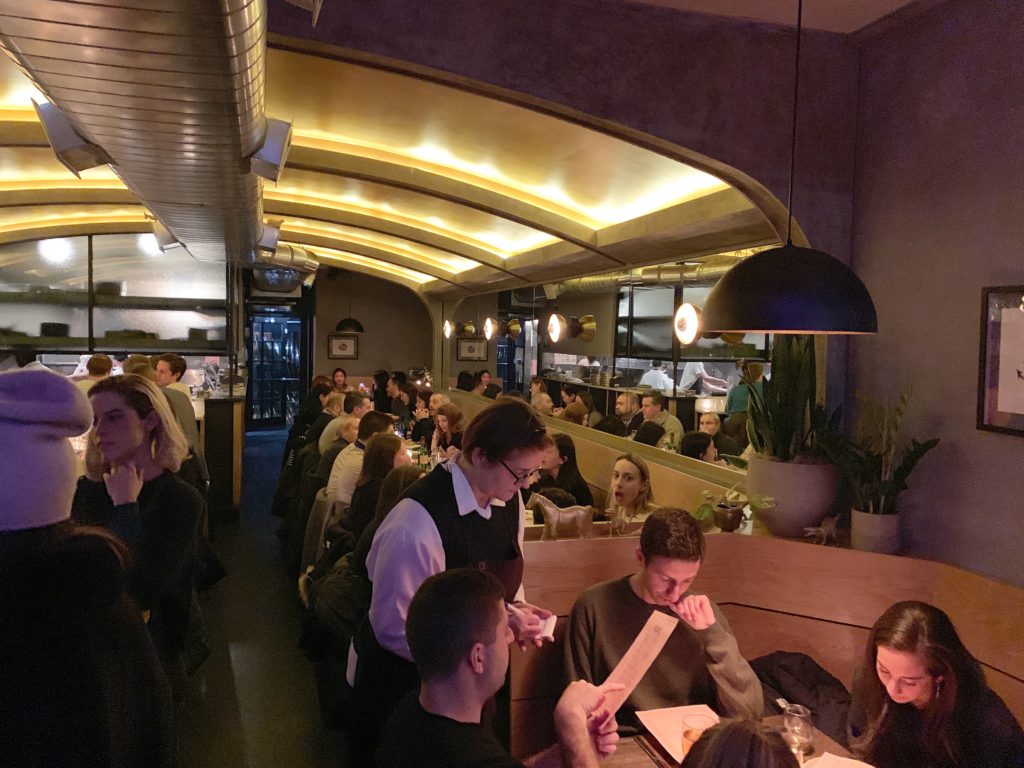 The best seats in the house are actually at the chef’s counter — where four fortunate diners can overlook all of the action in the kitchen. And that action starts with the pizza. Dough, which appears to barely have risen, is pounded out by hand on a granite counter until it’s as thin as a cracker. The heavily oiled dough is then placed on the grill for 1-2 minutes. Slight bubbles arise from the top and char marks appear on the bottom. The dough is then removed from the grill, flipped over, topped, and placed back on the grill for another minute. Then it’s time to eat. 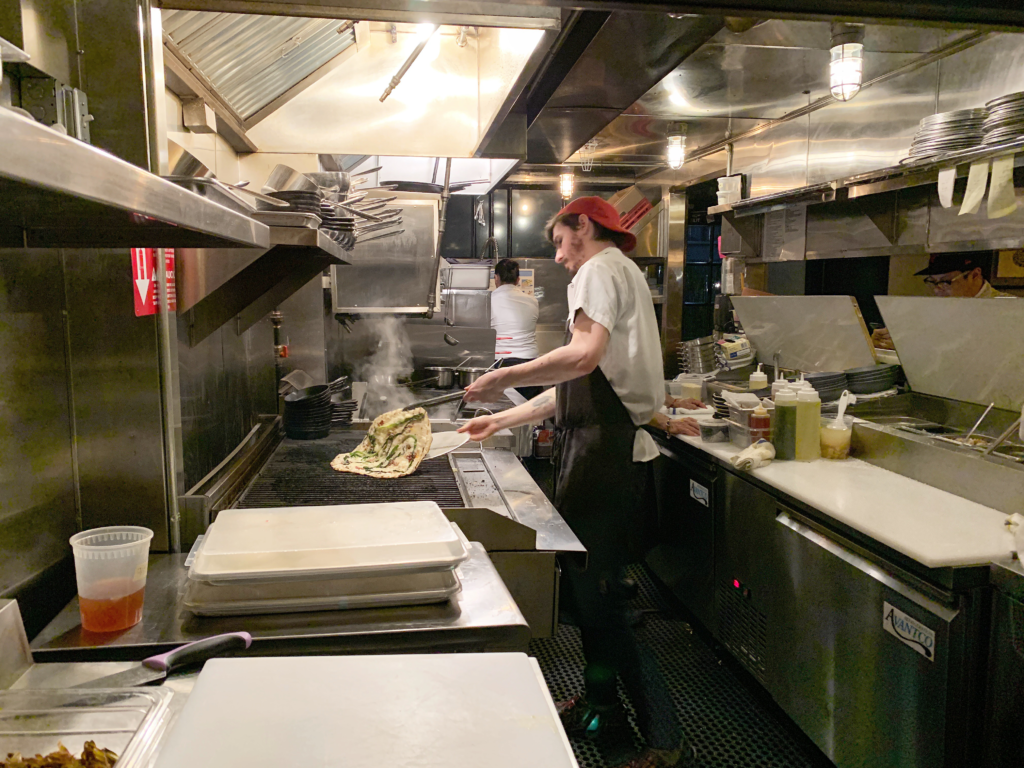 Although the pies are thin, they are surprisingly filling. Two hungry people can finish two pies. But they might not have much room for any of the other menu items. The price point per pie ($17-$22) is reasonable and on par with other pizza places in the neighborhood. Neapolitan pies at Sorbillo, a few blocks west, are similarly priced, as are the 10-inch pies at Joe & Pat’s over on 1st Avenue. There are six pies on the menu at Violet (although the first “pie” is actually a $10 interpretation of garlic bread featuring garlic pickle, herbs, crispy neem leaf). I tried three pies during two separate visits in March: their classic, pesto, and mushroom/onion pie. But those simple descriptions don’t do them justice.

The classic comes topped with fontina, tomato sauce, scallions, and herbs. It’s hard to choose a favorite component to this pie, but the scallions are a nice surprise and add a little bit of crunch to each bite. And the sauce tastes like an old Italian grandmother made it from scratch. The pesto pie (called “Atwells”) features a combination of four cheeses and dollops of pesto sauce made from broccoli. It’s topped with some pistachios too. Although the coverage of pesto appears to be sparse, somehow it’s possible to taste the sauce in every bite. And that’s a good thing — it’s incredible. And finally there’s the mushroom/onion pie (“Beech Vibes”) which is the most unique of the ones I tried. It features tahini duxelles, thyme, hon shimeji, caramelized onions, and Truffleist salt. The duxelles are essentially a mushroom based paste. And hon shimeji are button-capped “beech” mushrooms (hence the name). But my favorite part of the pie was the onions, which are caramelized to perfection. 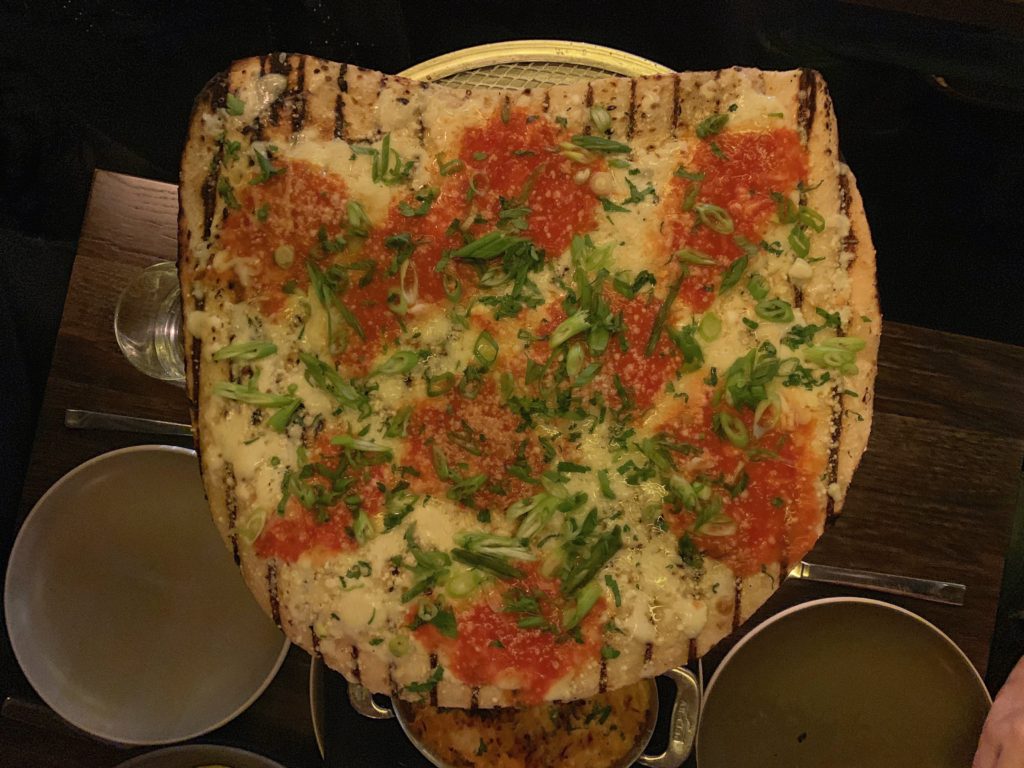 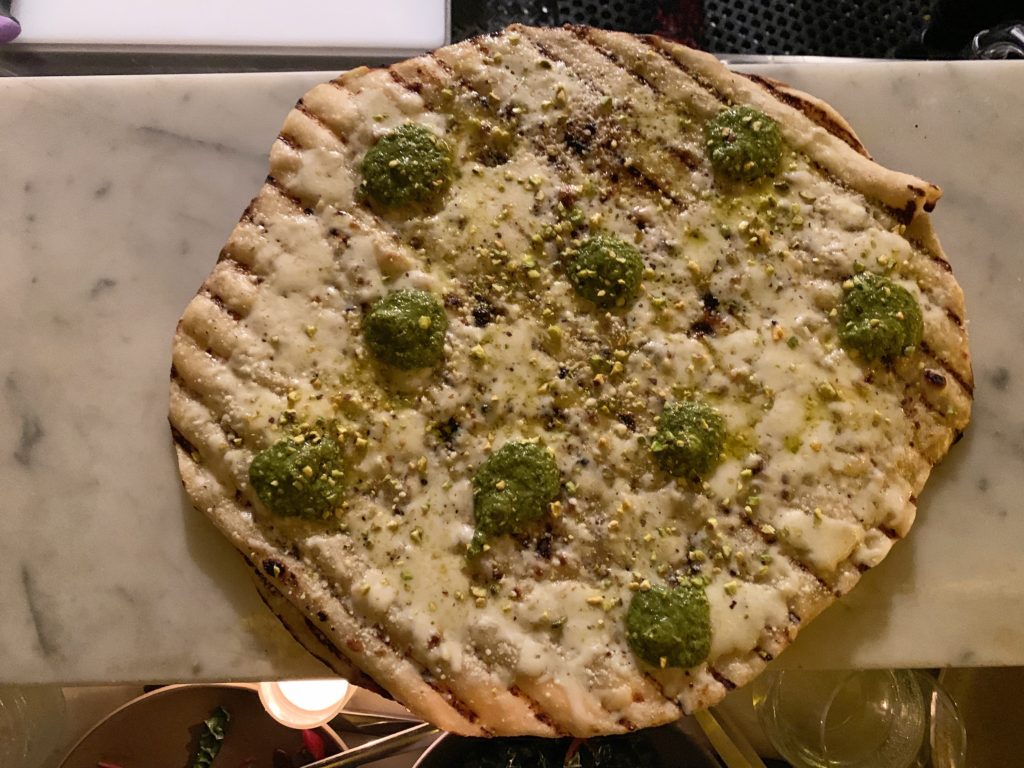 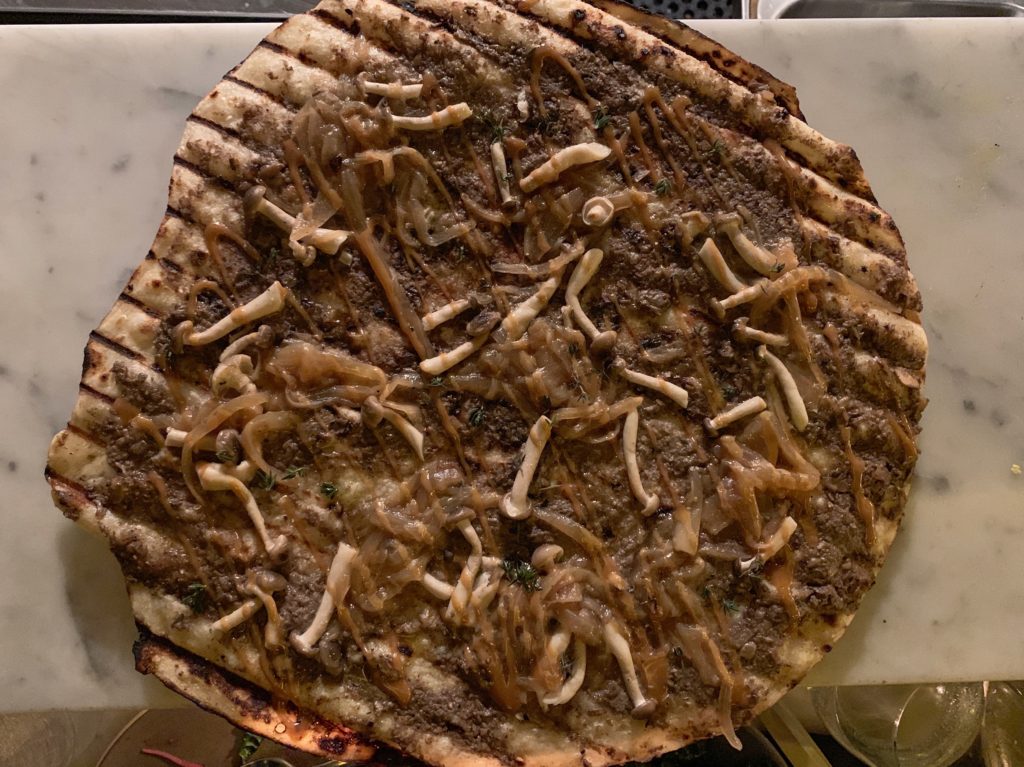 I’ve thought long and hard about which pie I enjoyed the most and I honestly can’t tell you. They’re each so different — which is important since there are only a few options. I’d say that the “Classic” is a good way to ease into the whole grilled pizza experience and I tend to judge pizzerias on their most most basic offerings. So I’d recommend starting with that and then building your order from there.

Another thing I love about Violet is that each pie is served with a scissors. I’ve written about why this is a logical way to serve pizza (The Parlor in Dobbs Ferry employs a similar tactic towards its pizza slicing). When dining with a group it effectively ensures that you can divide the pizza in a proportion that best suits everyone’s tastes and appetite. Plus it’s interactive.

There are so many styles of pizza that are still unrepresented in New York (deep dish, St. Louis, etc). But now there is a formidable spot to get grilled pies (which traces its roots to Rhode Island). What will the Emily team tackle next? Only time will tell. But for now, head down to the East Village and grab some grilled pizza at Violet.

2019-03-15
I Dream Of Pizza
Previous: Far Flung Pizza At The Hound In Saintpoint, Idaho
Next: Yankees CC Sabathia Tries Good NYC Pizza For The 1st Time