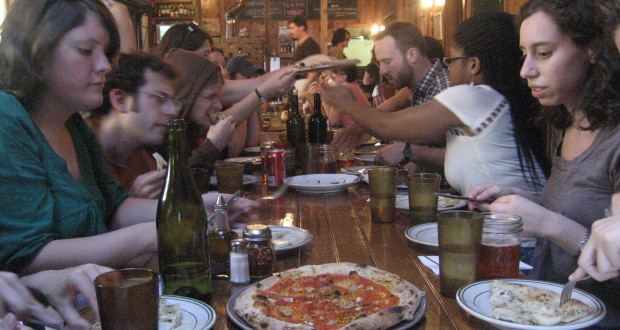 Of the hundreds of hours I spend each year reading about the New York City food scene, there is no restaurant I can think of which has gotten more press than Roberta’s (261 Moore Street). Since it opened in the Bushwick neighborhood of Brooklyn in early 2008, it has become not only a model for …

Summary : One of New York's best pizza places, Roberta's spearheaded the farm to table movement while revitalizing Brooklyn's Bushwick neighborhood. Their pies change daily and much of the produce is grown locally.

Of the hundreds of hours I spend each year reading about the New York City food scene, there is no restaurant I can think of which has gotten more press than Roberta’s (261 Moore Street). Since it opened in the Bushwick neighborhood of Brooklyn in early 2008, it has become not only a model for great pizza, but also for the sustainable food movement. What started out as an underutilized backyard with a vintage Mercedes that served as a planter led to a sprawling rooftop garden. And this year, Roberta’s has laid the groundwork for a true urban oasis, taking over a vacant lot next to the restaurant so that it can efficiently grow an even a larger percentage of it’s produce than it has been in recent years. It’s not just pizza; it’s a movement. 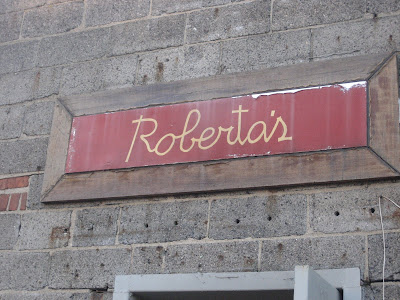 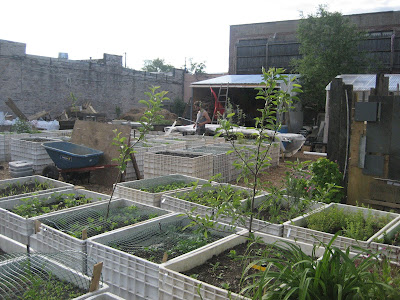 I can envision a future in which all restaurants are run like this. Everything about Roberta’s screams local — from the beer they have on tap (Sixpoint Sweet Action! Greenpoint Summer Ale!) to the meats and cheeses they ship in from area farms. Other restaurants might have a single local beer on tap or have a relationship with one local meat distributor, but at Roberta’s keeping things close to home is the rule rather than the exception. As a result, diners are treated to a rotating selection of delicious seasonal pies that rival those of any other Neopolitan pizza place in the city. 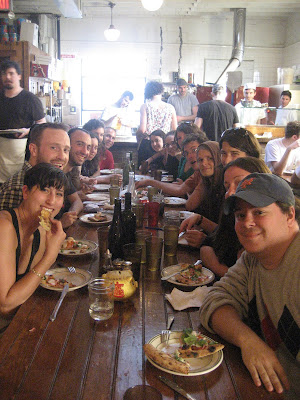 The only way to give Roberta’s the proper treatment was by bringing Pizza Club there to try every pie on the menu. There were 11 on the night we went, and with some alterations we ordered a total of 15 pies. I’ve never been a place in the city with such creativity when it comes to topping combinations. It’d been years since I’d had pineapple on a pie, and ingredients like crema fresca, shaved radish, and ramps aren’t things you see on a pizza menu everyday. While some restaurants seem to have a small selection of ingredients on a given night which they use on pies in different combinations, Roberta’s seems to limit the majority of its most intriguing ingredients to a single pie. In fact, all of the aforementioned ingredients appear only once on the entire pizza menu.

One of the highlights for me was the Cheeses Christ (black pepper, mozzarella, taleggio, parmigiano, heavy cream), a successful variation of a quatro formaggi pie. It happened to be the first pie that came out, and after going through the entire pizza menu we decided to order another one just to see if we liked it as much. Without a doubt, it was a hit.

The J Street (tomato, mozzarella, ramps, pecorino) featured similar ingredients to Motorino’s ramp pie (ramps, marinara sauce, pecorino), but the ramps themselves were used quite differently than at Motorino. While Roberta’s takes the entire leaf of the vegetable and serves it on top of the pie, Motorino dices the ramps before they’re placed on the pie. I’m not sure I prefer one over the other. But what I do know is that ramps are delicious and if you ever see a ramp pizza on any menu you should get it. 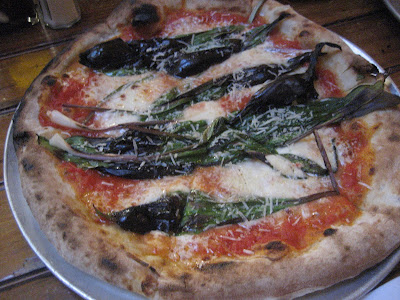 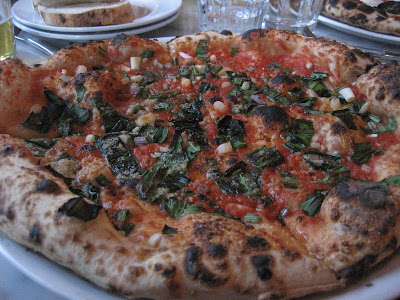 Despite all of the funky topping combinations available at Roberta’s, every trip should include a taste of their Margherita pie, which is simple, solid and only $8. Even their Russo (tomato, oregano, and garlic) is tasty and a steal at $7. Nowhere can you find personal pies this tasty for this cheap. At Paulie Gee’s the comparable pies arethe Regina (fior di latte, italian tomatoes, pecorino romano, fresh basil) which costs $12 and the Marinara (italian tomatoes, chopped fresh garlic, pecorino romano, sea salt) which costs $10. And at Motorino, a Margherita pie (tomato, fior di latte, basil) goes for $12, while a Marinara (tomato, oregano, olive oil, garlic) costs $10. The pies at Roberta’s seem to be slightly smaller, but just as tasty. 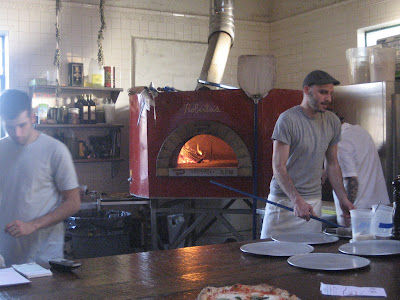 Roberta’s is meant to be enjoyed with a large group. No two pies on the menu are similar which means you’ll just have to try them all! Lucky for you, there’s always a party in the backyard where beer taps are flowing freely and there is a DJ spinning some tunes. And inside, there’s another bar and picnic style benches that can accommodate a party as large as you can put together (15 of us sat at a single table, and there was room for more). The restaurant is easily accessible, just a two minute walk from the Morgan stop on the L train. 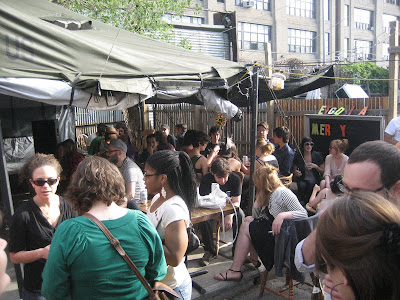 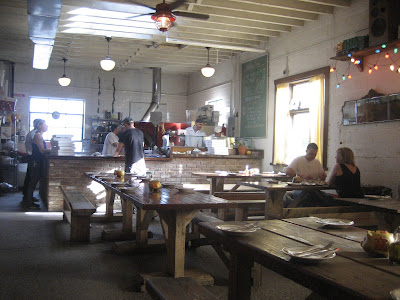 As I walked out of Roberta’s on a warm summer evening, I thought about the future of pizza in New York City. A place like Roberta’s could never exist in Manhattan or in a more populated area of Brooklyn. It takes a brave soul to open a restaurant away from the hustle and bustle of Greenpoint and Williamburg. The reason being that there are so many good places to eat in those neighborhoods, that you have to give people a reason to want to make their way out to Bushwick. You have to be confident in your product and offer an experience that other, more centrally located places cannot. And Roberta’s does just that.

The space is rustic. The pizza is great. And the jalapenos on your pie were grown out back.

Check out photos of all of the pies we tried: 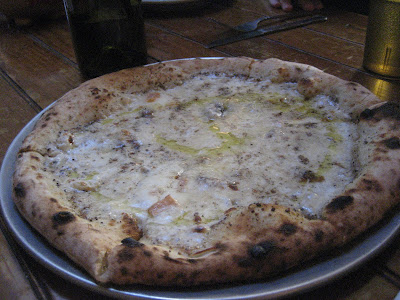 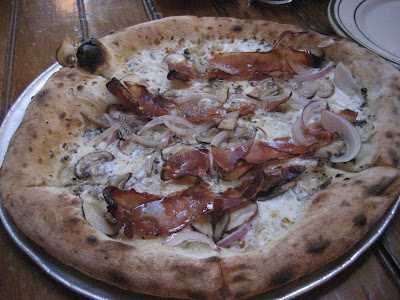 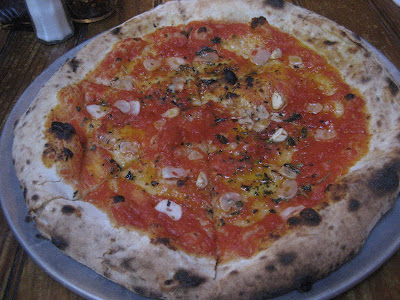 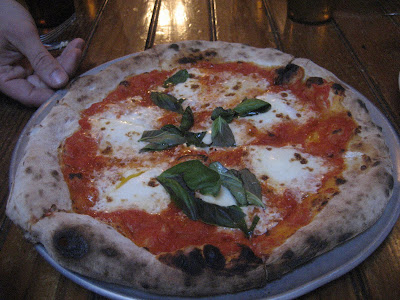 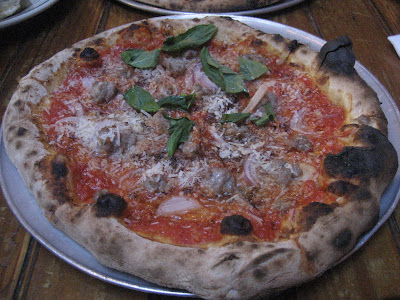 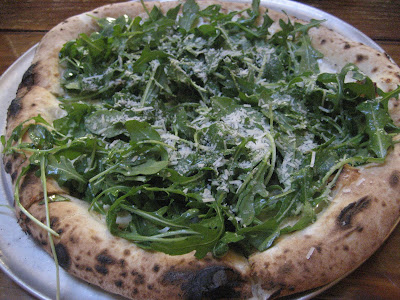 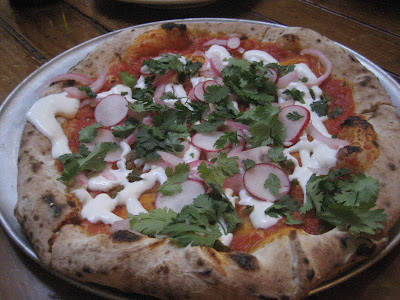 (no pork sausage on the pie in this photo) 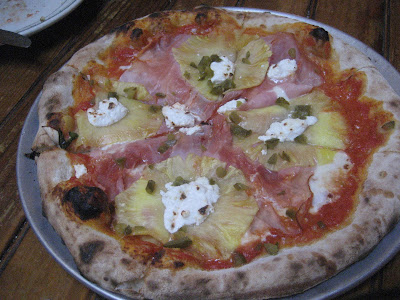 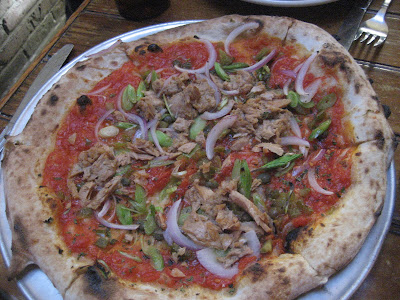 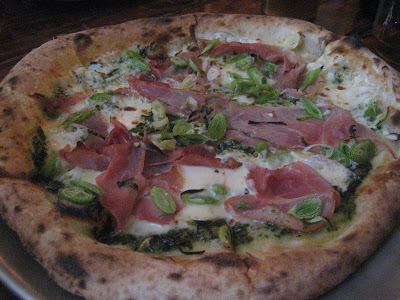 Previous: Get A 30% Discount At Veloce Pizzeria
Next: The New York Times Shines The Spotlight On Homemade Pizza