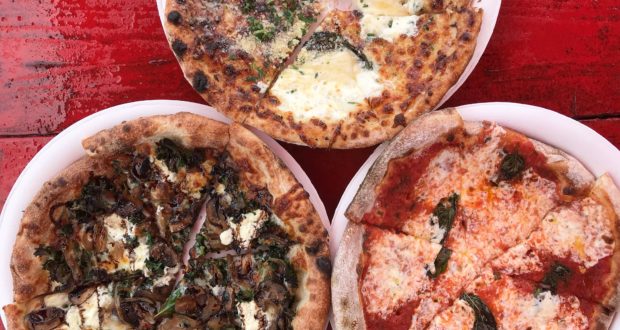 Earlier this year, I made my third trip to Hawaii – and my first to the island of Kauai. My prior pizza experiences in Hawaii had been mixed (Rocco’s Pizza Pub on the Big Island was solid, but I had less success finding a good pie on Oahu). Some friends of mine who recently visited …

Summary : A non-descript truck located on the island of Kauai serves up some of the best pizza you'll find in Hawaii.

Earlier this year, I made my third trip to Hawaii – and my first to the island of Kauai. My prior pizza experiences in Hawaii had been mixed (Rocco’s Pizza Pub on the Big Island was solid, but I had less success finding a good pie on Oahu). Some friends of mine who recently visited Kauai had raved about a pizza truck that parks on the island’s east coast, not far from the town of Kealia. So I made sure to set aside some time to give Scorpacciata a try. 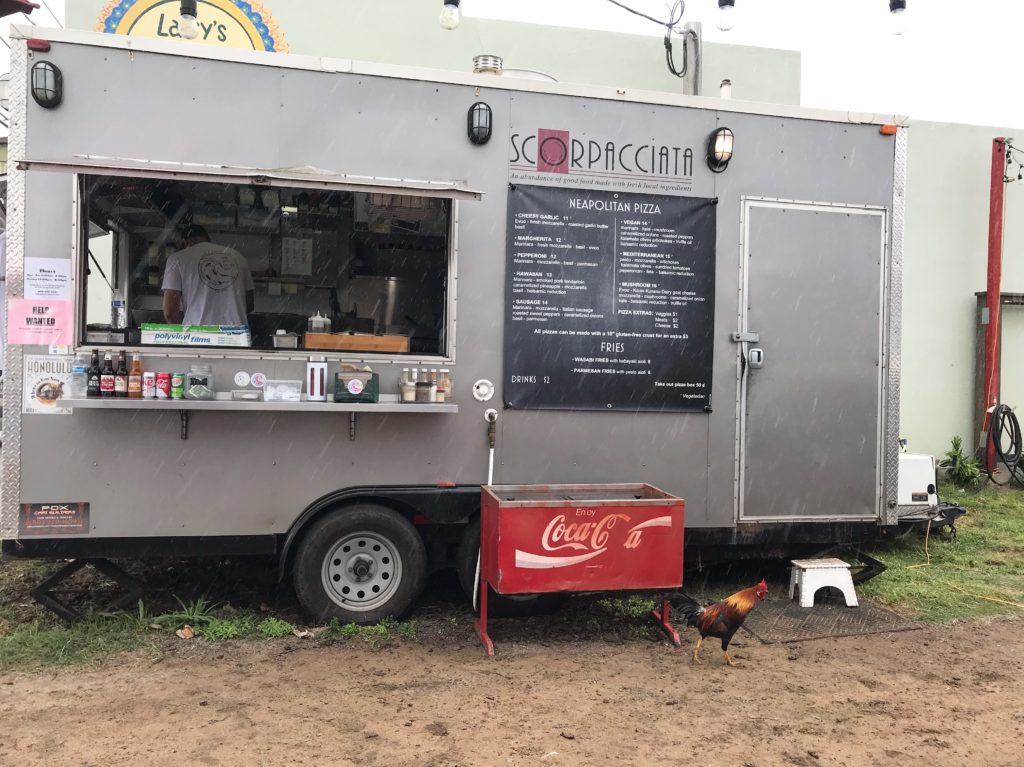 My wife and I swung by for dinner on our first night on Kauai, but unfortunately the truck was closed. A quick peek at the truck’s latest Instagram post explained that the owner was away snowboarding for a few days. My friends had also mentioned that they tried to go one day and the owner had closed to go surfing. So even though Scorpacciata posts regular business hours (11AM-8PM daily, except on Sundays when they open at noon), take those with a grain of salt. This is not uncommon on Kauai – where the island’s laid back vibes take precedent over the maintenance of predetermined business hours which most of us are accustomed to.

On our final day in Kauai, my wife and I paid another visit to Scorpacciata (which is parked next to a popular shave ice truck called Wailua Shave Ice). This time: success!

The truck, which has been around for almost 3 years, serves eight pies ranging from $11 to $16. Gluten free crust is available for an extra $3. The pies are listed as being “Neapolitan” but they are not as large as what you might find at a more traditional Neapolitan place (I ate nine slices which I could never do at somewhere like Keste or Motorino). One pie should be enough to fill you up, unless you are super hungry. 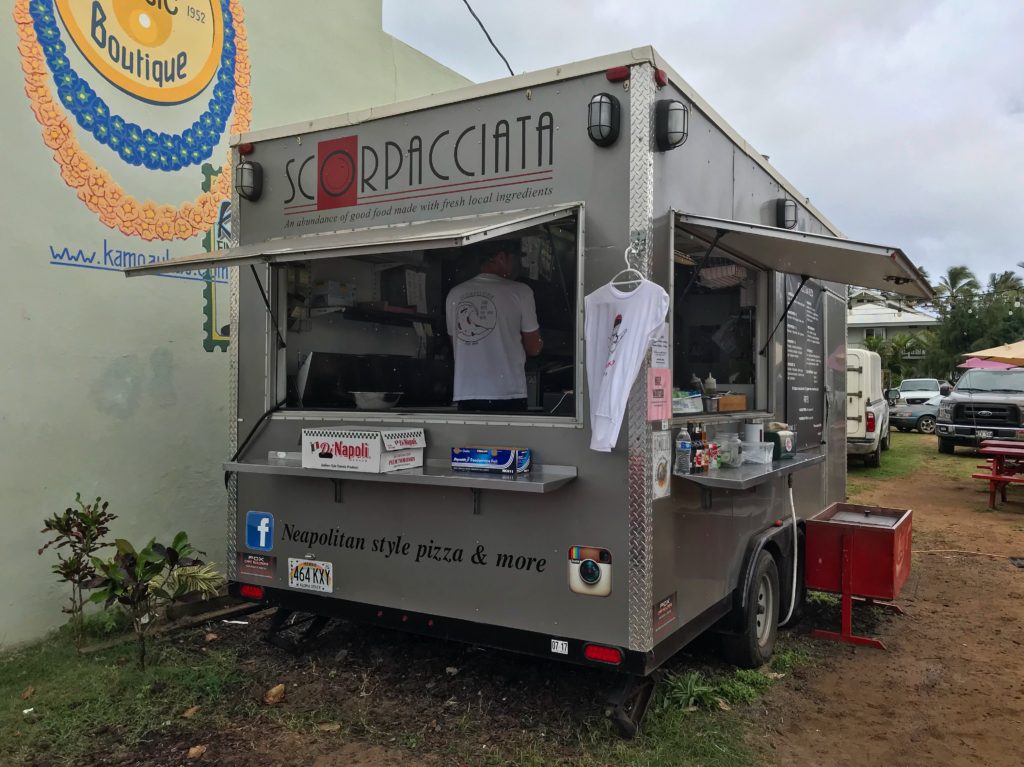 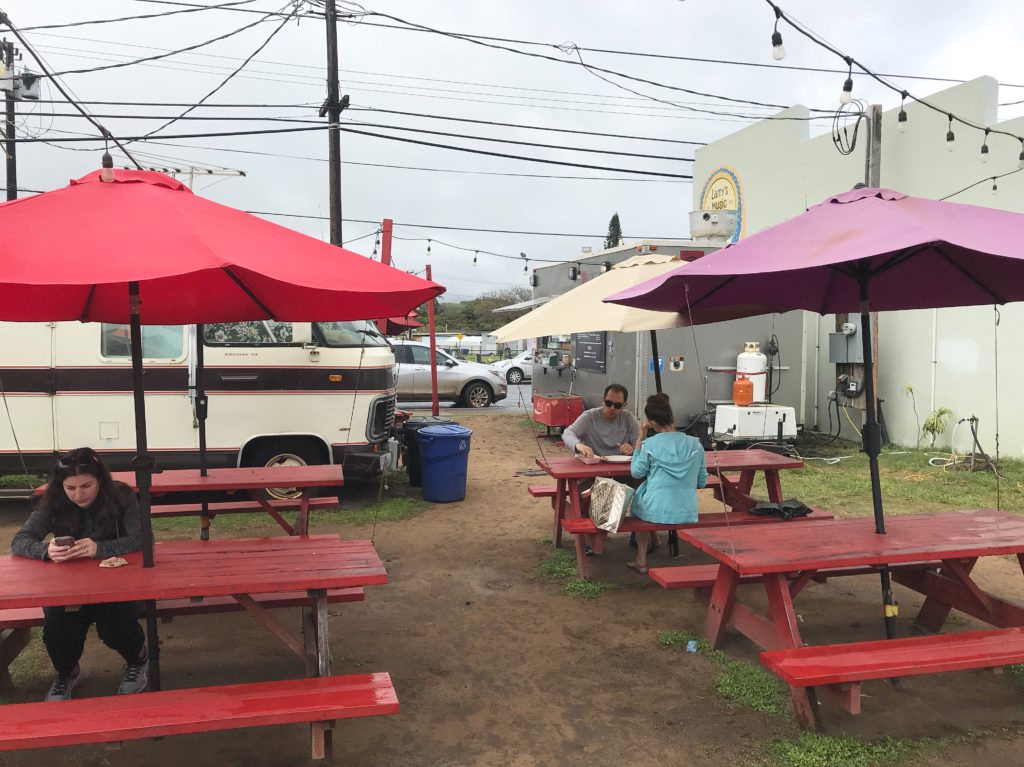 My wife and I ordered 3 pies: a margherita pie, a cheesy garlic pie, and a mushroom pie. All three were delicious – the margherita was the least interesting of the three, but was as good of a margherita pie as I’ve had out of a truck. The main topping on the cheesy garlic pie (in addition to olive oil, basil, and mozzarella) is roasted garlic butter. How can anyone not love roasted garlic butter? I enjoyed the simplicity of this pie, which focused on this standout ingredient.

And finally, the mushroom pie. This was by far the most “complex” pie on the menu featuring mushrooms (obviously) goat cheese (from Kauai Kuana Dairy), mozzarella, olive oil, caramelized onions, kale, balsamic reduction, and truffle oil. Even though this was called the “mushroom” pie it could have just as easily been named after any of the other ingredients. They were all proportioned relatively evenly – and that’s part of the reason I loved this pie so much. A great combination of toppings. 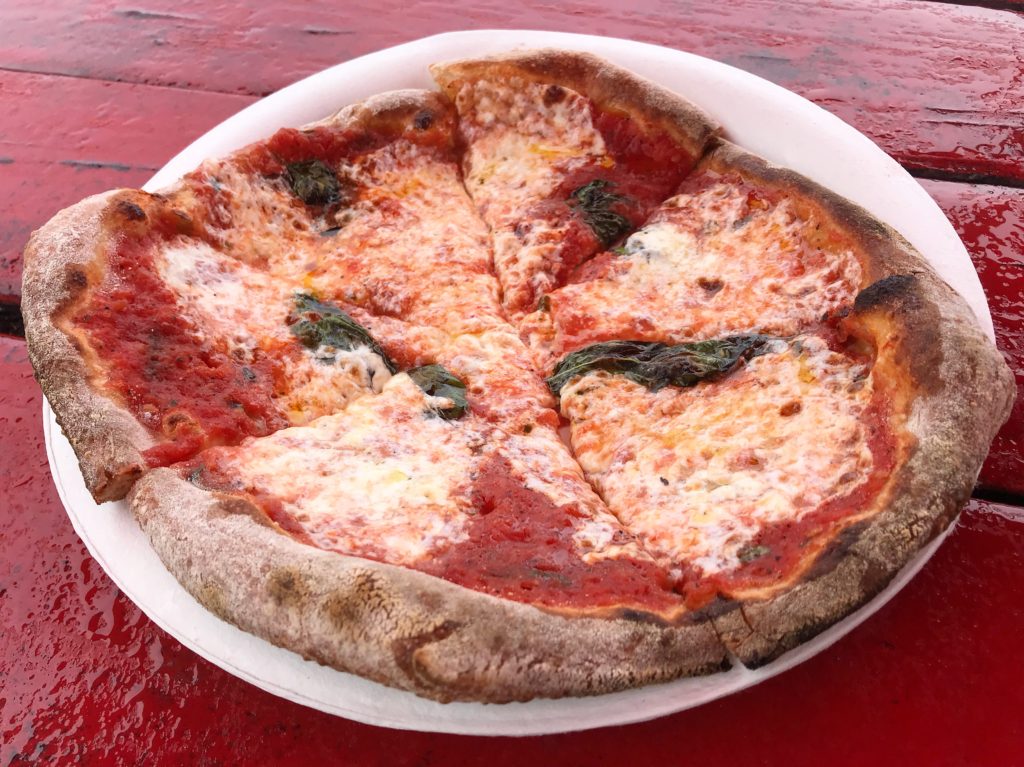 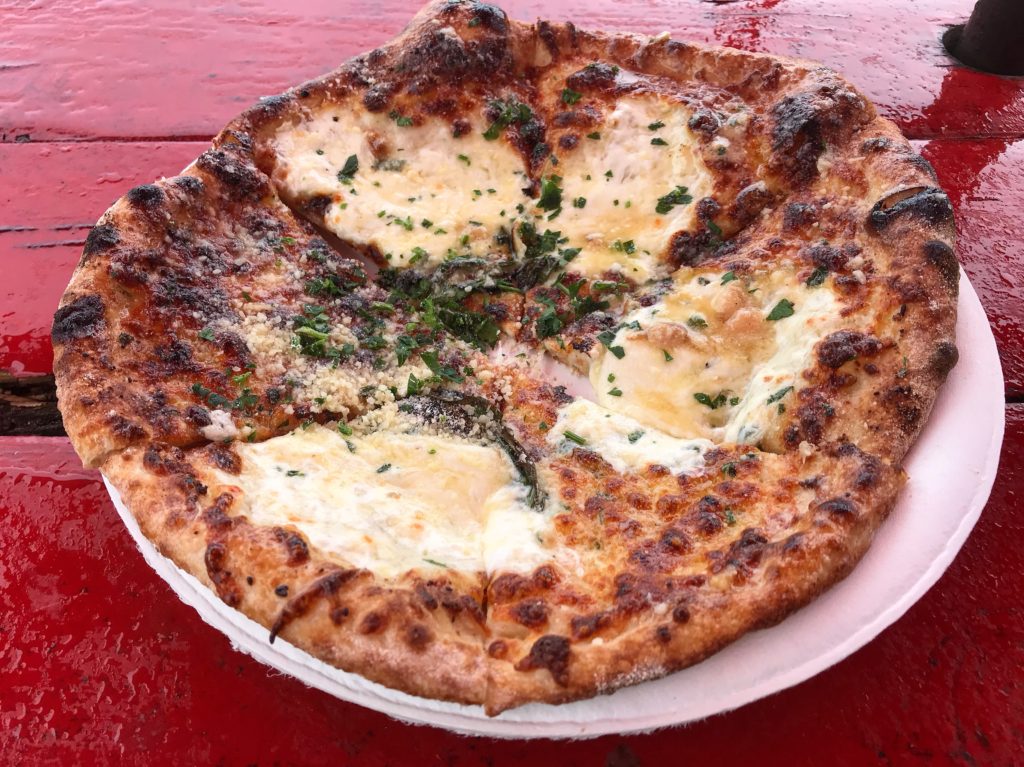 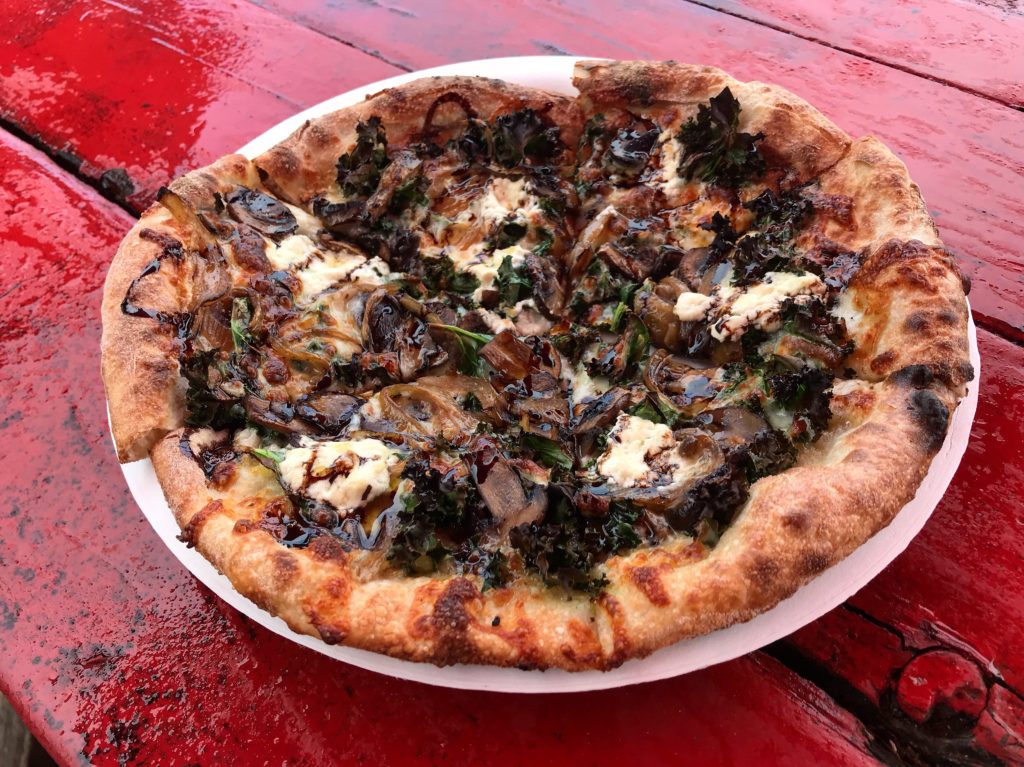 Although pizza is the focus at Scorpacciata, they also serve two versions of french fries: wasabi fries with kabayaki aioli and parmesan fries with pesto aioli. We ordered the latter and it was excellent. Pizza and fries don’t typically pair well together, but when you’re vacationing in Hawaii, who cares about what goes with what.

Over my three trips to Hawaii in recent years, one of my main discoveries is that the best food generally comes from trucks, carts, and vans. And the offerings at Scorpacciata prove that pizza is no exception. If you find yourself on Kauai, grab some pies from Scorpacciata… and some fries… and some shave ice next door for dessert. Mahalo!