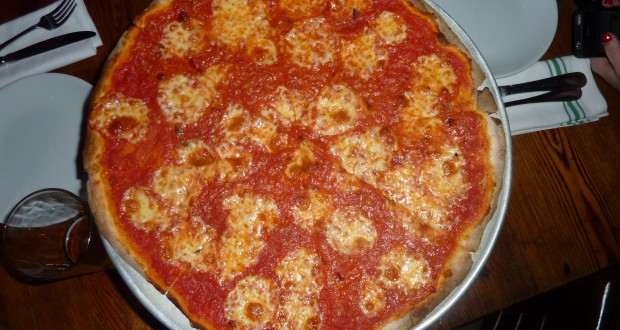 Rubirosa (235 Mulberry Street) in Nolita is an Italian restaurant which has been garnering rave reviews since opening last year. It’s run by the same folks behind Joe & Pat’s — a well known pizza place on Staten Island. Other than some photos in the bathroom, which contained the Joe & Pat’s name on little …

Summary : Rubirosa is an Italian restaurant that serves decent pies along with other Italian offerings. The vodka and pesto pies

Rubirosa (235 Mulberry Street) in Nolita is an Italian restaurant which has been garnering rave reviews since opening last year. It’s run by the same folks behind Joe & Pat’s — a well known pizza place on Staten Island. Other than some photos in the bathroom, which contained the Joe & Pat’s name on little league jerseys, there is no indication the two places are related. I’ve always enjoyed my experiences at Joe & Pat’s and was curious how Rubirosa would compare.

With eight pies on the menu, I figured I’d gather eight friends and try them all. Rubirosa has small pies — ranging from $15-$17 and large pies — ranging from $22-$24. Because they’re so thin, a small pie is similar to a person pie. Alternatively, it can be split between a few people as an appetizer. The full menu features nearly a dozen pastas along with bruschetta, anitpasti, salads, and some main courses. In other words, pizza isn’t the main attraction here. Nor should it be. Even without trying any of the other food, I know that. The pizza was tasty, but it’s not good enough to draw people in by itself. Given the other food options at Rubirosa, that’s more than fine.

Initially I was intrigued by the topping combinations. There is a Classic pie and a Fresca Pie (mozzarella, tomato, basil), but then things get more interesting. There’s a Vodka pie (vodka sauce and mozarella) which I don’t see enough on menus in New York (in fact, I can recall having ever seen it at a decent pizza place in Manhattan). Their Mushroom pie is spruced up with peas, pecorino, and prosciutto) and a Sausage & Broccoli Rabe pie contains just that. Their Pesto pie is basic, but also underrepresented on local menus. Least interesting were perhaps the Bianca pie (ricotta, mozzarella, parmigiano), and the Arugula pie (cherry tomato, parmigiano, balsamic).

I am biased towards pesto and vodka pies, and those two stood out among the others. They were flavorful and filling. A great way to start off your meal at one of the most talked about Italian restaurants to open recently. 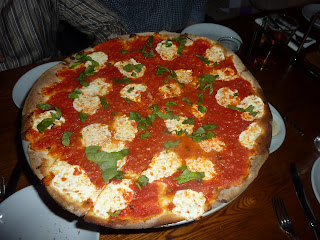 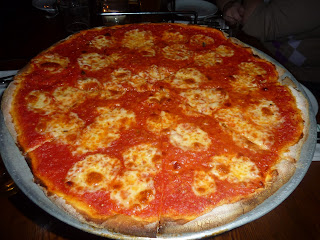 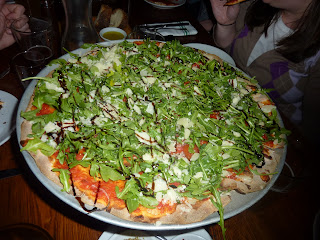 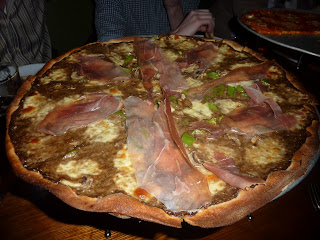 Pesto Pie (mozzarella)
*served with tomatoes, although they aren’t listed on the menu 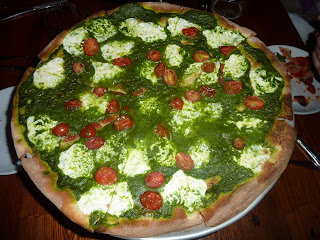 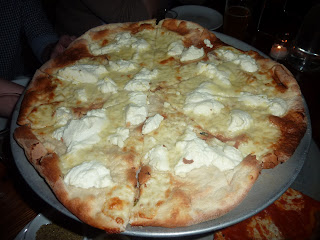 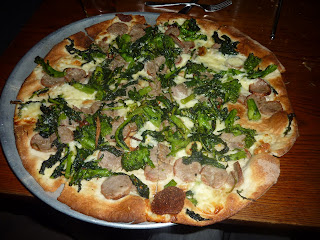 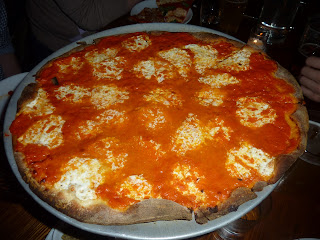