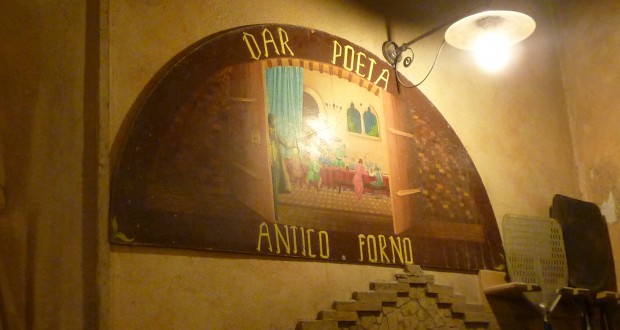 Posted by: I Dream Of Pizza in International, Italy, Reviews May 6, 2011

After spending four days in Naples, primarily eating pizza, I made my way up to Rome. I only had about 36 hours to spend there before flying out to Barcelona and while I intended to try some pizza, it was not the primary purpose of the trip. In fact, I had a long list of …

Summary : One of the more disappointing places I visited in Italy, Dar Poeta's pizza simply isn't that good. The homey Italian feel is worth something, but this place should be avoided.

After spending four days in Naples, primarily eating pizza, I made my way up to Rome. I only had about 36 hours to spend there before flying out to Barcelona and while I intended to try some pizza, it was not the primary purpose of the trip. In fact, I had a long list of non-pizza restaurants I wanted to try in Rome. Although the best meals I had there did not involve pizza…. like this duck in an orange sauce from Trattoria Monti or this poached egg with asparagus mousse and black truffle from Antico Arco…

… I will write only about the pizza I ate in Rome. Since I just made it to three places, it is difficult for me to make generalizations about the pizza in Rome or draw any conclusions based on my experiences. I can, however, make some suggestions about places to go (and avoid). 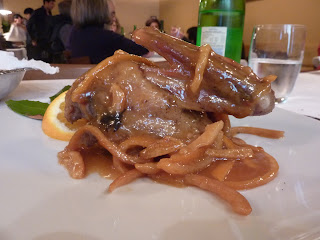 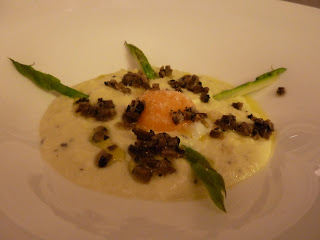 The first place you should avoid is Dar Poeta (45 Vicolo Del Bologna, 39-06-6830-7769) which is located in the funky and hip Trastevere neighborhood on the west bank of the Tiber, south of Vatican City. The place had gotten mixed reviews online, but I decided to go there for two reasons: (a) I wanted to check out Trastevere and (b) I was there on a Sunday when many places are closed or have odd hours. I knew it was open, in a cool area, and at least some people who’d eaten there raved about it. 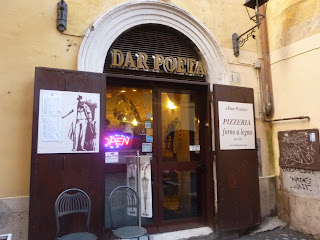 To be frank, it was the worst pizza I had during my trip. I ordered a Margherita pie (€6.00, about $8.00) and it was difficult to proceed past the first bite. The cheese was perhaps the worst part — definitely a far cry from fresh mozzarella that adorned pies in Naples. And the cracker-like crust was hard to work through. There was no basil. It’s not really a place worthy of being reviewed, but as I’m recapping all of the pizza I ate in Italy, I have no choice but to dedicate a post to Dar Poeta. 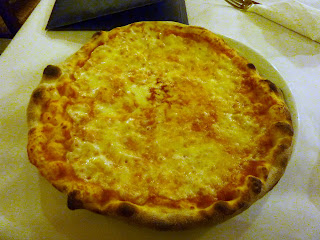 If I sound harsh, here are a couple of things to consider (this is me hoping that maybe the pizza wasn’t as bad as I actually thought it was): (1) I had just come from Naples, where I had some of the best pizza on the planet, so perhaps my expectations were heightened; (2) I had just eaten a delicious lunch at Trattoria Monti and was dining at Dar Poeta on a somewhat full stomach (3) I went at an off-hour (5PM) and perhaps whoever made my pie was out of sync or the oven wasn’t at the proper temperature.

Although I try to avoid reading other reviews, this place baffles me. It got a pretty good write-up on Slice which noted that “this is the real deal,” but the user comments below range from “easily the best pizza we had in Rome” to “the pie I had there was the weakest I had that week in Rome. I felt like I had been suckered into a tourist trap.” On Chowhound, one user writes, “we went twice while we were there” and another notes that “it was a revelation” — using words likes “amazing” and “unprecedented.” But a review on Hidden Palette points out the following: “It’s not the service or the price that I have a problem with here, as they are both perfectly reasonable; it’s the Pizza… Making things worse is the quality and quantity of the toppings they use. Both pizzas I tried were barely visible underneath the abundance of tasteless cheese and the tomato was scarcely detectable.” That’s how I felt.

The best thing about Dar Poeta was the space itself. Checkered table cloths, wooden chairs, and brick walls, give the space a very homey Roman vibe and there is a lower level which is somewhat secluded and, I imagine, hopping during regular business hours. Even if it is a place to be seen once dinnertime roles around, it’s a place where I won’t been seen ever again. 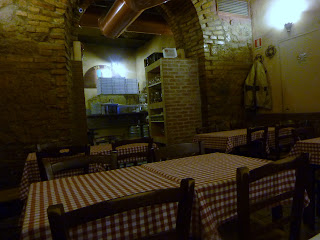 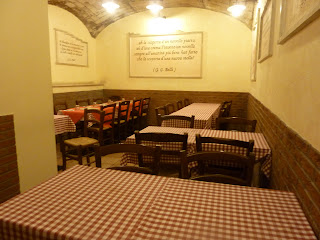 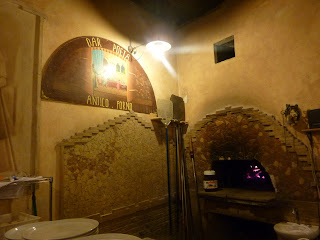 The above piece is the 10th article in a 13-part series about my pizza adventures in Italy (January 2011 – February 2011). You can access the other parts of the series here:

Previous: Scenes From My Kitchen
Next: Tomorrow: Free Pizza At Campo ‘de Fiori In Park Slope