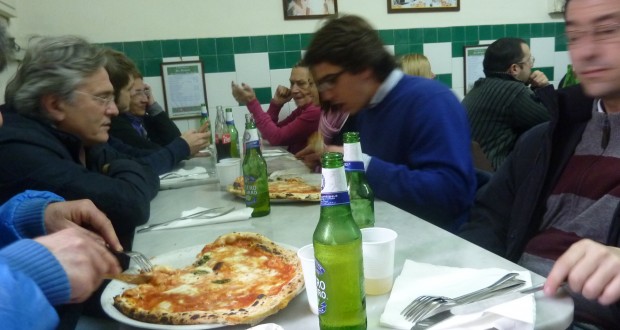 Posted by: I Dream Of Pizza in International, Italy, Reviews March 4, 2011

And the pizza journey begins… I arrived in Naples on a Wednesday afternoon in late January with Scott from Scott’s Pizza Tours. We’d both done extensive, independent research before our travels so it was great to compare our notes and see where they overlaped. It was also beneficial that Scott had traveled to Italy in …

Summary : What is perhaps the most famous pizza place in Naples didn't quite live up to expectations. The wait is long, the prices are very cheap, and depending on how much time you have in town, a stop here may or may not be worth it.

And the pizza journey begins…

I arrived in Naples on a Wednesday afternoon in late January with Scott from Scott’s Pizza Tours. We’d both done extensive, independent research before our travels so it was great to compare our notes and see where they overlaped. It was also beneficial that Scott had traveled to Italy in 2009 and had dined at many of the pizza places we were determined to visit during our trip. Although I had studied abroad in Italy in 2004 (and spent weekends in Naples and Rome), pizza was not a priority of mine at the time. There was only one purpose to this trip: pizza.

Perhaps the most famous pizza place in Naples — at least internationally — is Da Michele (1/3, Via Cesare Sersale, 081-553-92-04). For decades, it’s been common to experience a long wait time there, but the spot has seen an even greater flux of tourists stopping by over the past year. The reason? It was prominently featured in the film Eat, Pray, Love. If it’s good enough for Julia Roberts, it should be good enough for you and me, right? 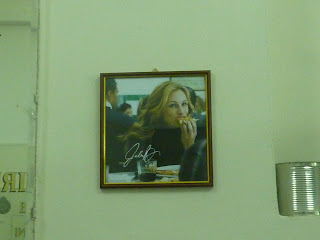 I had incredibly high expectations for Da Michele. My friend Arthur — who is a food writer for The Daily Meal — claims its the best pizza he’s ever had (going so far as to call it perfect). And Scott had visited there on his last trip and raved about it. So immediately after throwing our bags down at the hostel we headed there. I was surprised to find a large crowd gathered around on a weekday afternoon, especially since January is one of the least touristy month of the year. It figures that most of the people waiting to be seated spoke Italian. In fact, we ended up sitting next to two Italian sisters from Salerno who were on a shopping trip to Naples for the day. 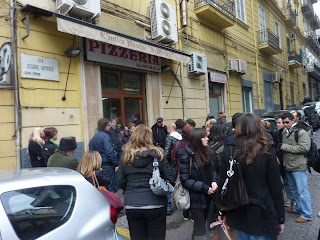 We popped inside and grabbed numbered ticket to reserve a spot in line. Although it might look chaotic out front, its actually a very systematic process. Every five to ten minutes, a man opens the front door and calls out a group of numbers. There were about 20 parties in front of us which equated to a 40 minute wait.

Second, like at many of its counterparts, the pizza is incredibly cheap by American standards — especially given the quality of the food. They could easily hike up their prices, but instead, the price of a pie tops out around $6.00 depending on the conversion rate. We ended up ordering a “Medium” of each pie and two beers. Our total bill: €12.00 (about $16.00). 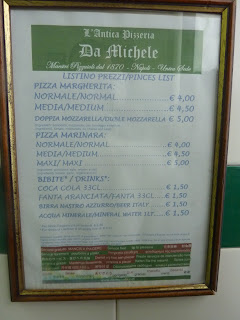 The place itself is pretty no frills. You enter in the front of a main dining room, with adjacent dining rooms off to the side. The oven is in the back of the main dining room. All menus are posted on the walls. Within a minute or two after being seated, the waiter will come by for your order. The menu is too simple to have any questions or special requests. It’s easy to be in and out of there in 30 minutes. 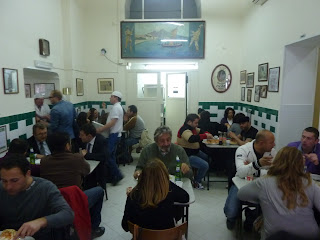 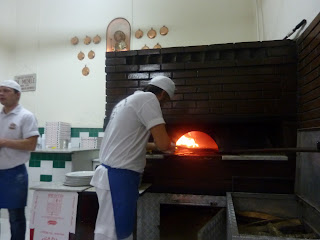 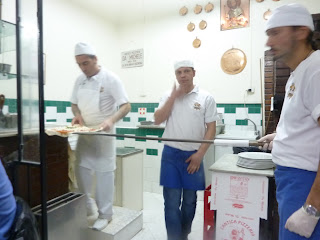 Although I thought the pies were decent, they did not meet my very high expectations. At the time, I didn’t have any other pizza places in Naples to compare it to. But as I ate at more and more places throughout the week, it was clear that Da Michele was not, in fact, worthy of being part of a conversation about the best pizza in Naples. Many pizzas I ate throughout the week were difficult to dig into with out a knife and fork. But at Da Michele, it was impossible. The pies, and especially the Margherita, were soggy and instantly feel apart. The cheese and sauce was uninspiring. The crust was a little bit undercooked. Scott had different memories of the pizza from his prior trip there. 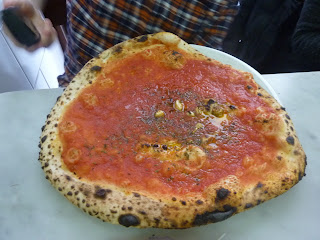 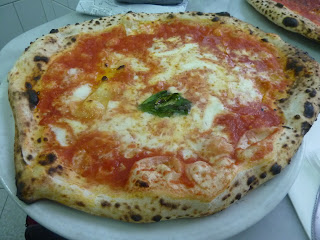 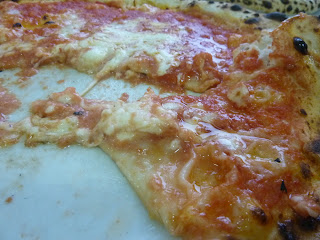 Despite all of this, I’m not going to tell you that Da Michele isn’t worth a visit. But if you have time to go to just one pizza place in Naples, don’t make it Da Michele. Especially if there is a wait. Go for the scene. Go because you saw it in a movie. Go because it’s cheap. But don’t go because you’re looking for the city’s best pizza.

It was a nice introduction to pizza in Naples, but I had hopes that more spectacular pizza would soon be on it’s way…

The above piece is the 2nd article in a 13-part series about my pizza adventures in Italy (January 2011 – February 2011). You can access the other parts of the series here:

Previous: Pizza Jokes: A Pie Walks Into A Bar…
Next: Name That Film