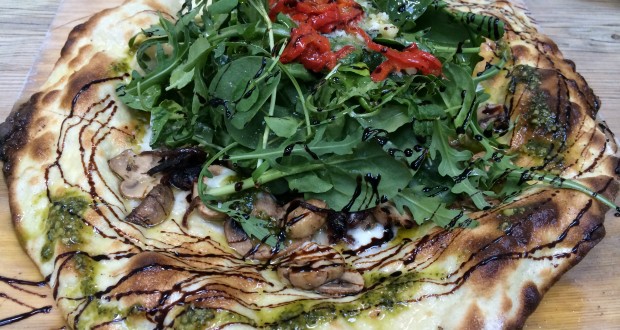 Story Deli In London: What Is Pizza Anyway?

Posted by: I Dream Of Pizza in england, International, Reviews May 20, 2015

Story Deli In London: What Is Pizza Anyway?

What is pizza anyway? It’s a question that you could debate for hours. When people ask me what the most important aspect of pizza is — the sauce, the cheese or the crust — I always say that the crust is most important. You can have great pizza without any sauce at all. And you …

Summary : Eccentric, organic pies on a paper-thin wafer crust served in a restaurant that looks like an art studio in London's East End.

What is pizza anyway? It’s a question that you could debate for hours.

You see, Story Deli makes a food that they call pizza. And there is cheese on top. And some sauce on top. And usually some sort of vegetable or meat too. But what is most unique about the pies there is the crust. They don’t use any yeast. What that means is that the crust never rises. So you’re eating ingredients on what is essentially a cracker. Is that pizza? Or is something else? I’ll let you decide for yourself, but I am always someone who has had a loose interpretation of pizza. If someone calls it pizza, well then that’s good enough for me.

So now that we’ve gotten that out of the way, let’s talk about Story Deli. 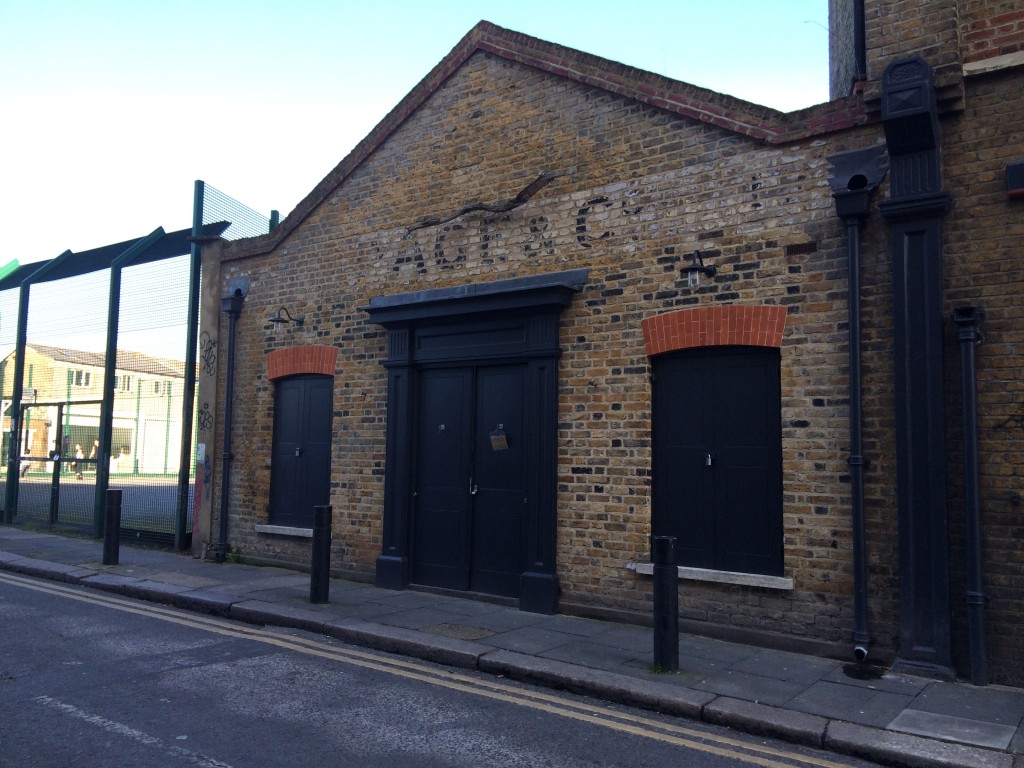 Story Deli (123 Bethnal Green Road) is a little hard to describe. It’s technically a restaurant. But there are no signs indicating that. I stopped in for lunch on a recent Tuesday afternoon. And even though I had the address on my phone, I almost couldn’t find it. “They must have moved,” I thought to myself. Finally I decided to ask someone, so I opened the black doors of the building in the photo above and inside there was an artist sitting at a table in his studio. “Do you know where I can find Story Deli?” I asked him. “You’re here,” he replied. “Really? Are you open?” I continued.

As I looked around, I realized I was not, in fact, in an art studio, but rather in a restaurant. And the man I was speaking with was not an artist, but the chef.  And what I’d thought were paint brushes and art supplies, at first glance, were actually eating utensils. I was the only person there so I sat down and made myself comfortable. 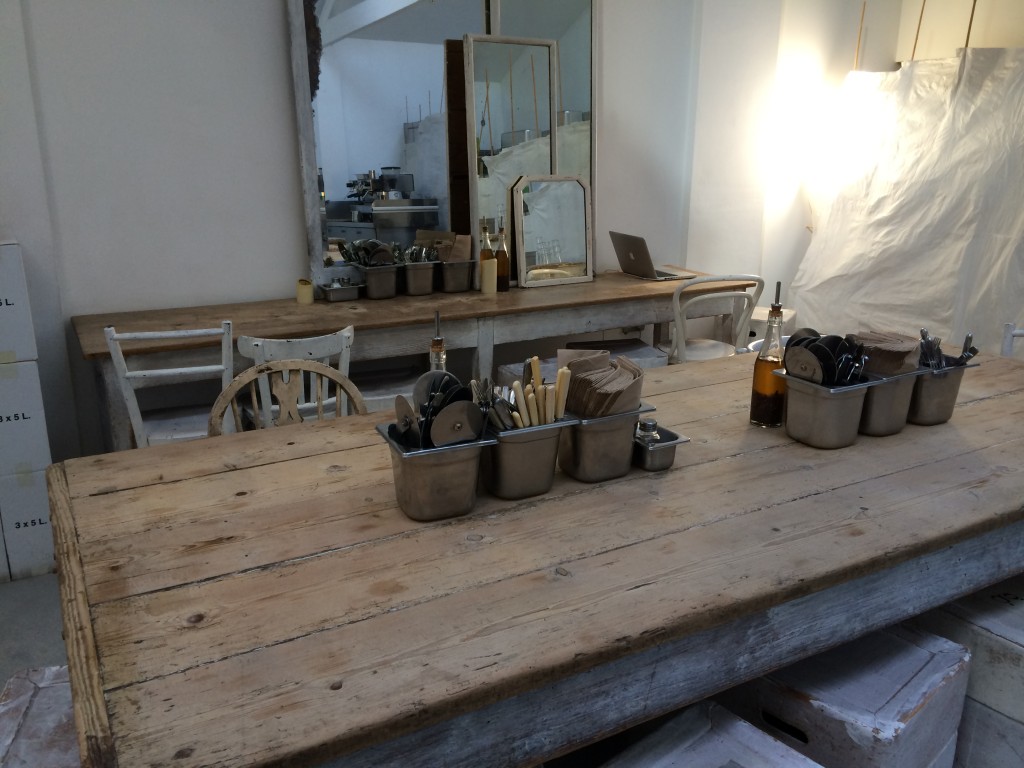 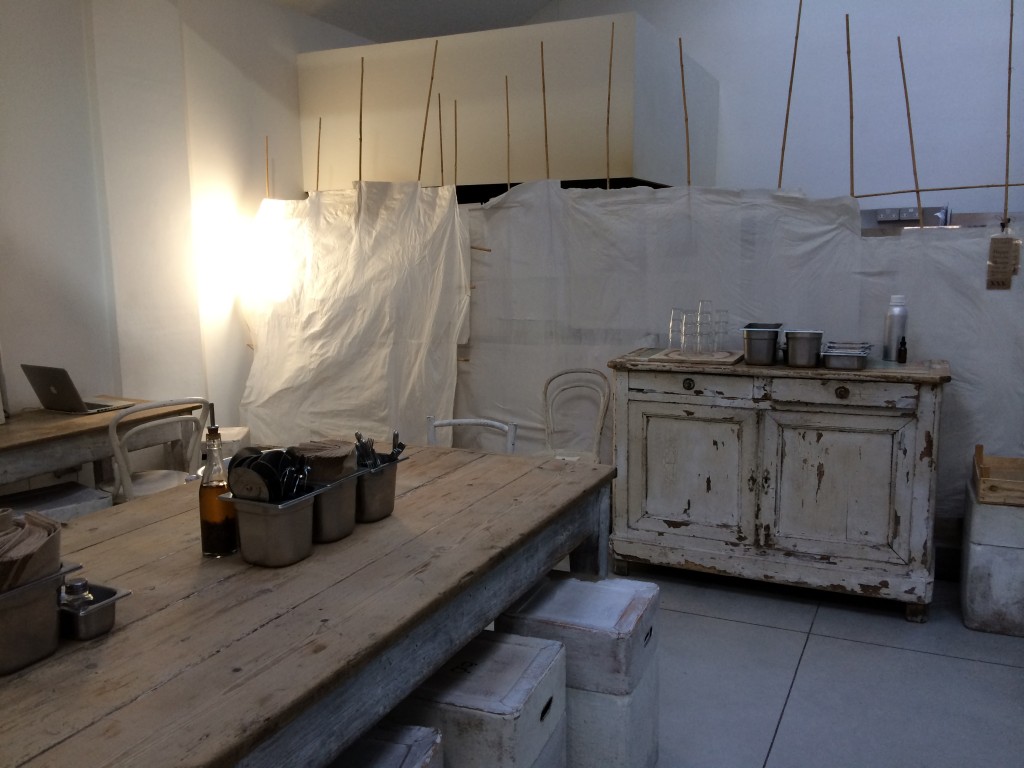 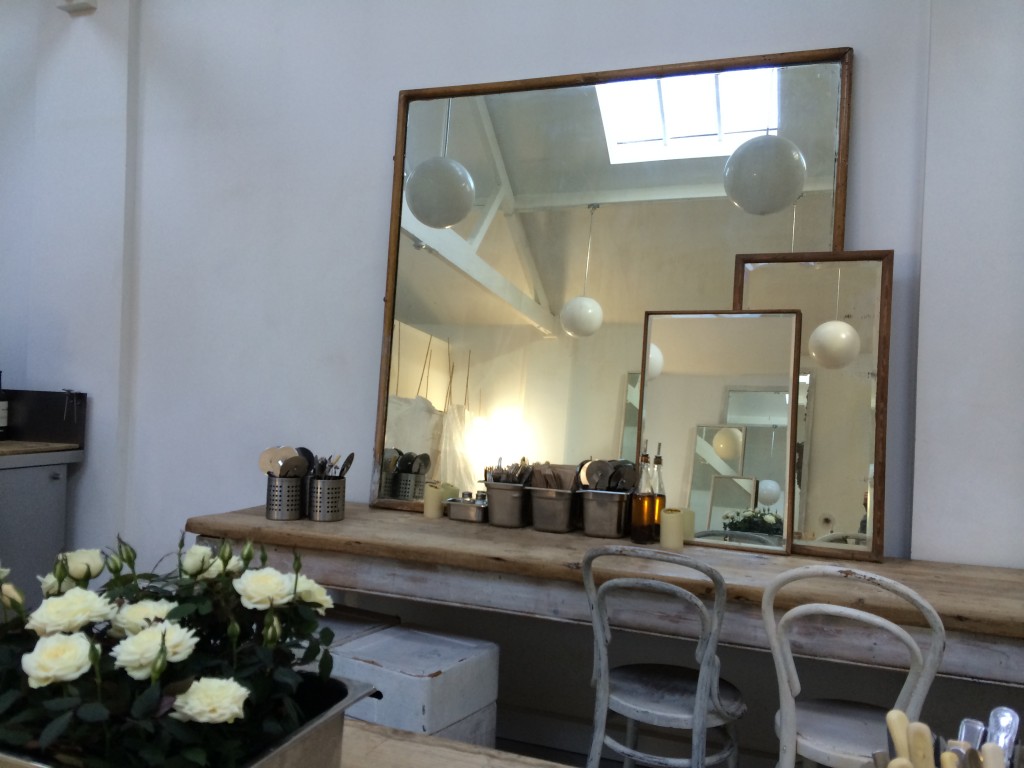 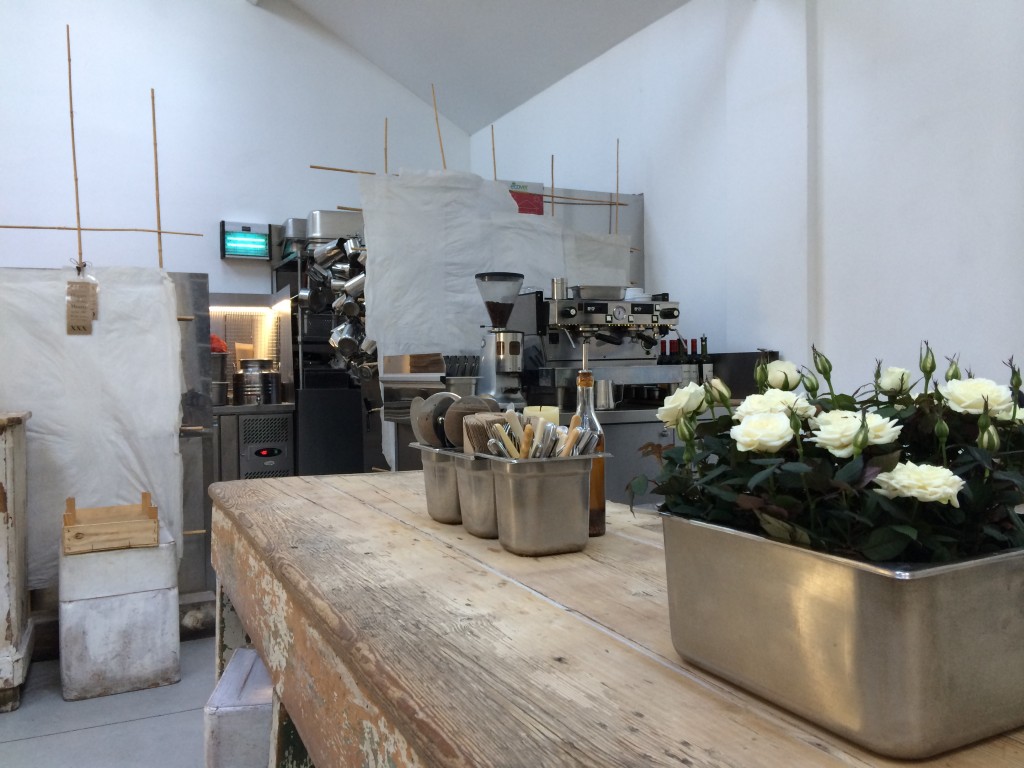 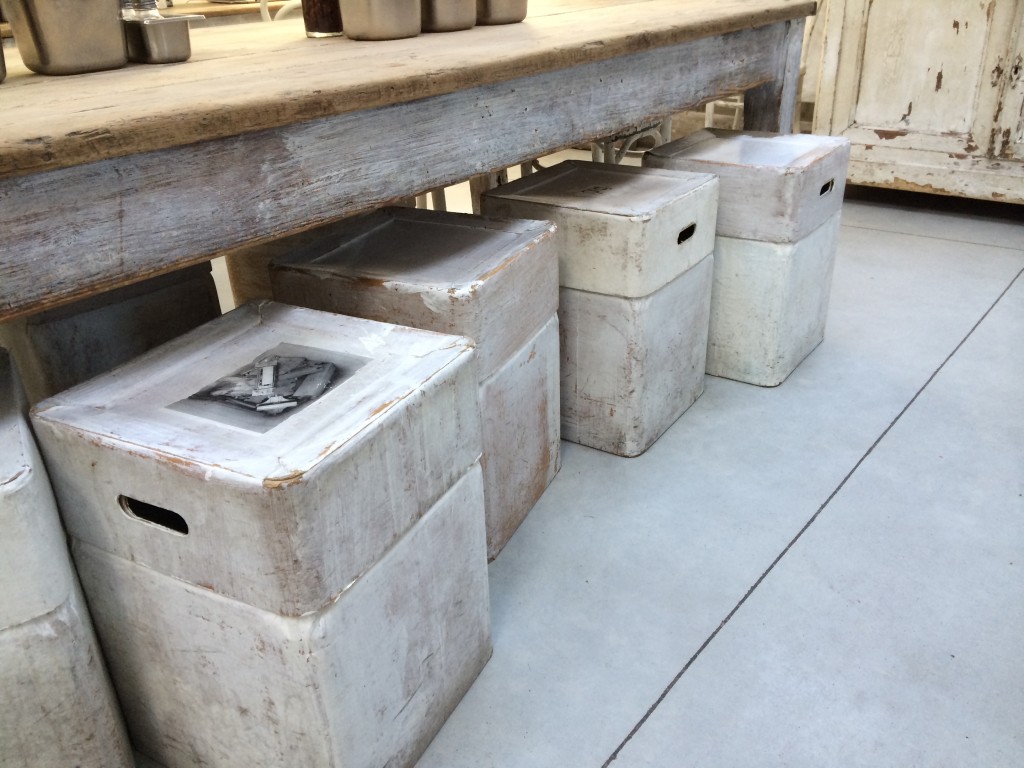 I placed my order and as the artist/chef – Lee Hollingworth – made my pies, I learned a bit about the place itself. This is actually the third location for Story Deli. It moves around every couple of years. Its currently lease is set to expire later this year and another move is anticipated. I didn’t quite follow the reasoning behind these moves, but it seemed to be some combination of good deals on rent and a desire to be located in an up and coming neighborhood.

As far as the pizza goes, Hollingworth explained that he only uses ingredients that are 100% organic. And since he’s yet to find yeast that meets his standards, he simply doesn’t use it. Since nothing needs to rise, the pizza only cooks for 30 seconds. One thing I really like about Story Deli is that they offer a kids size Margherita pie for 5 pounds. All the other pies are 17 pounds (roughly $25-$26). It’s up there with the most expensive pizza I’ve ever eaten. We’ll get to quality of the pizza in a moment. But the kid’s pie was a pretty decent size. If you’re on a budget or just want a sampling of Story Deli’s offerings, I’d recommend you come in and order that. 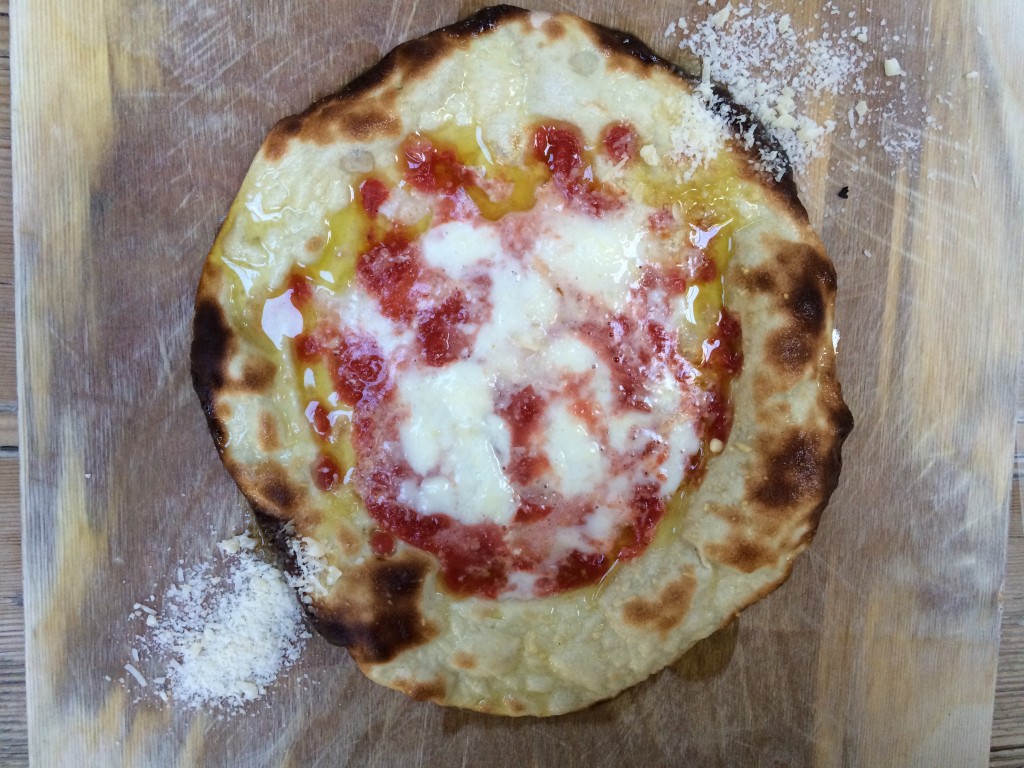 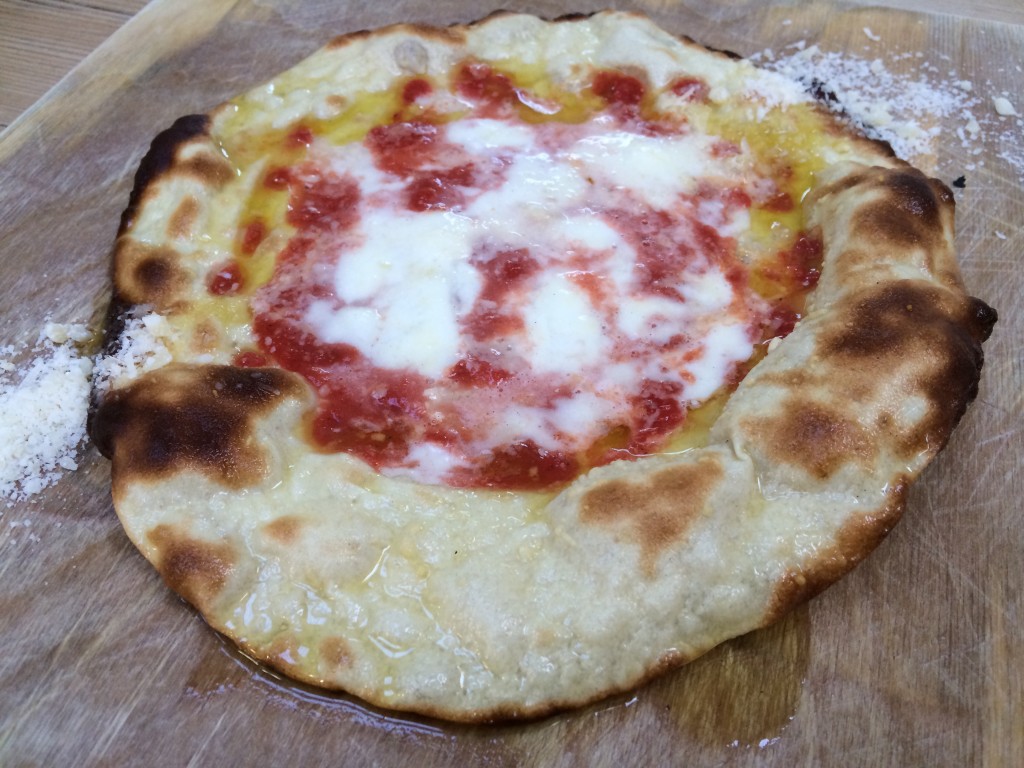 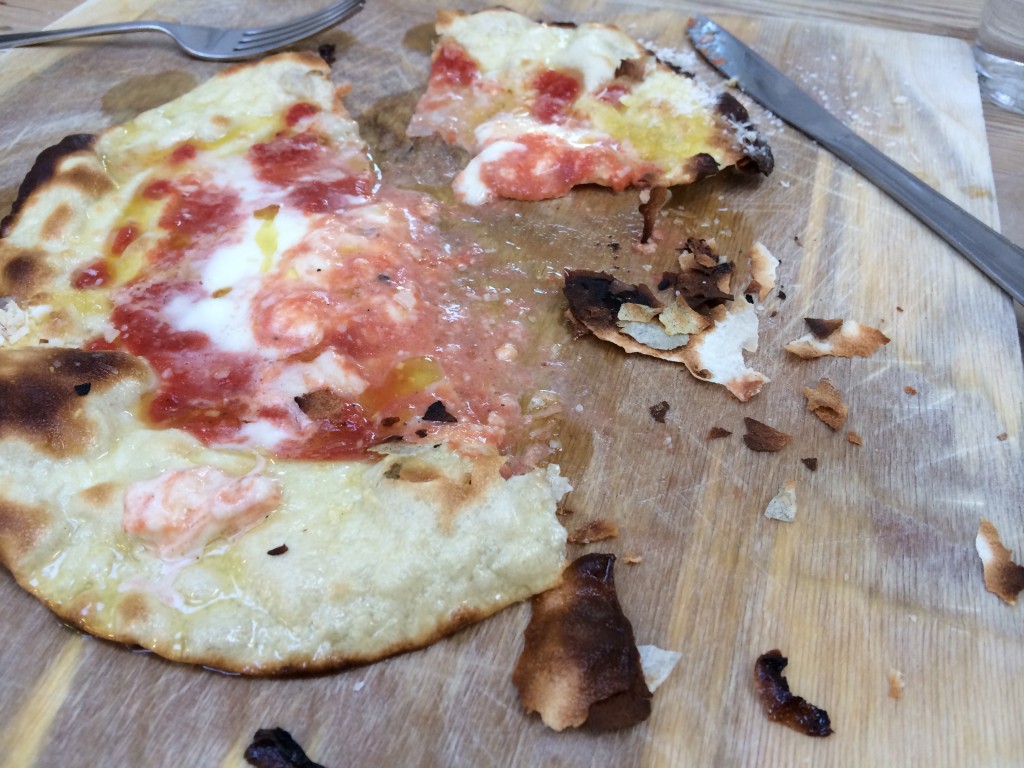 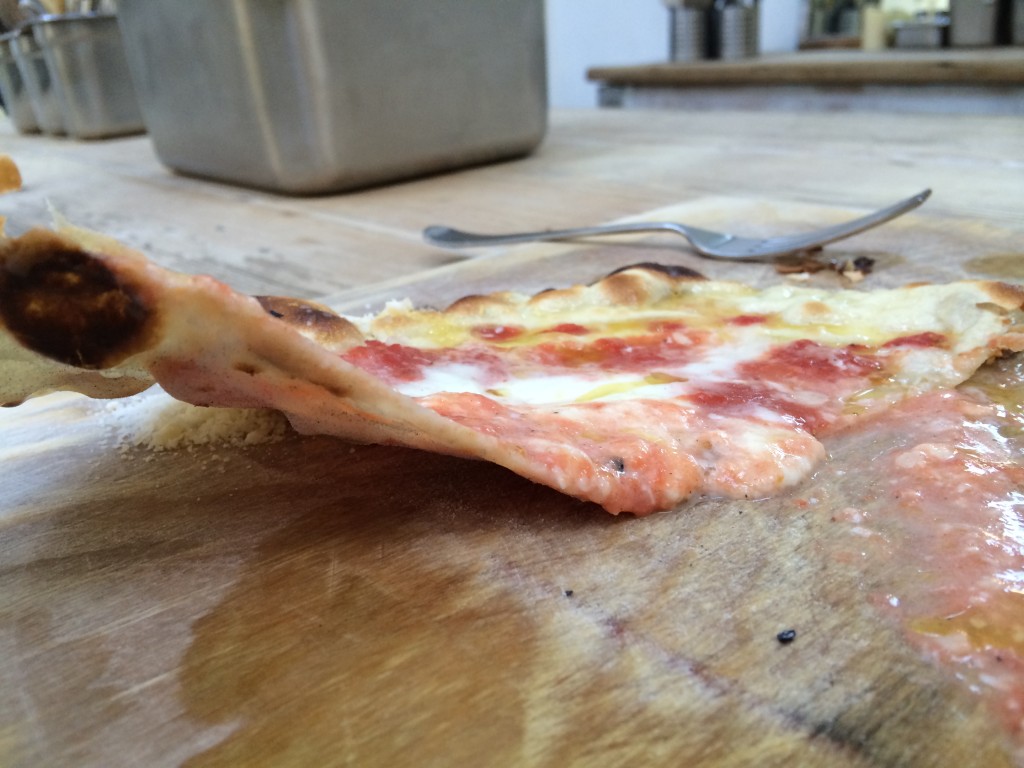 My margherita pie was delicious. You could taste the quality in each ingredient. The cheese and the sauce are top notch. It’s just that it’s nearly impossible to pick up. The pie is served whole (and remember this was a mini pie) and you really need to use a knife or fork to get at it. The center is so paper thin that it just collapses. Imagine putting sauce and cheese on a paper thin (really, paper thin — no exaggeration here) wafer cracker and picking it up. Womp.

The first pie only had two main ingredients on it and was hard to pick up. So you could imagine how difficult it was to eat my mushroom pie. I tried, but was unsuccessful, as picking it up. It was like eating a salad with a thin base underneath it. Really, I felt more like I was eating a salad than eating pizza. But that’s okay. It’s called pizza, so it’s still pizza in my book. That being said, I’m not a huge fan of salads. And I’m not a huge fan of tons of greens on my pizza. So this wasn’t life changing pizza, in my opinion. But it was better than almost any salad I’ve had. Take that for what it is. 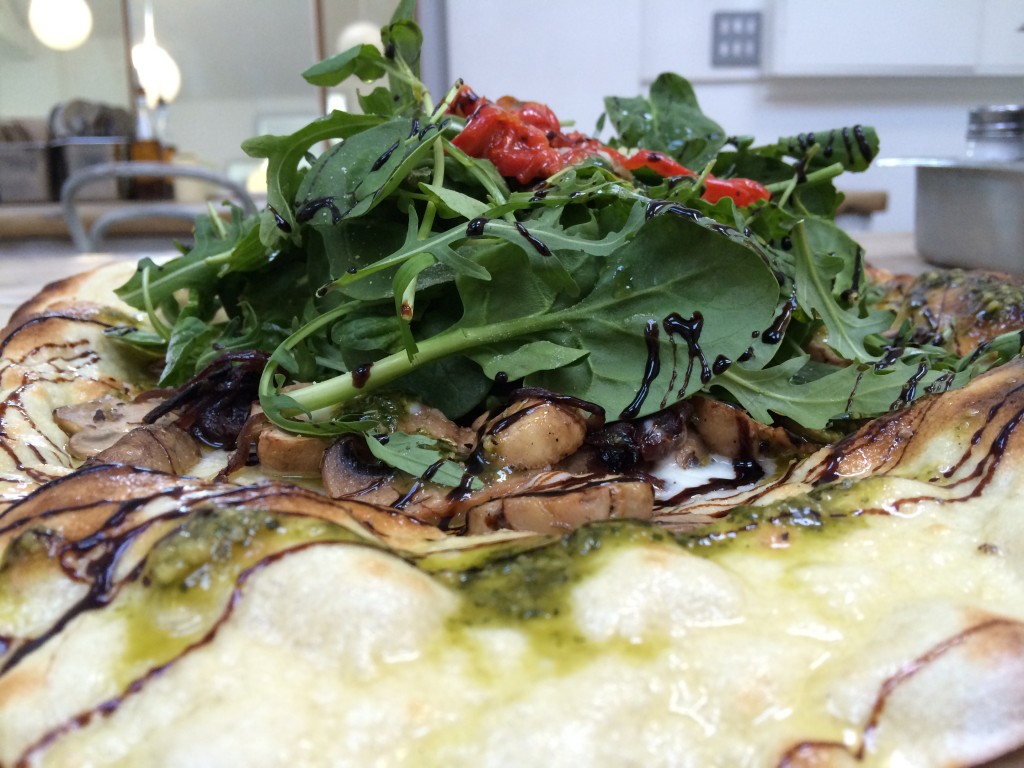 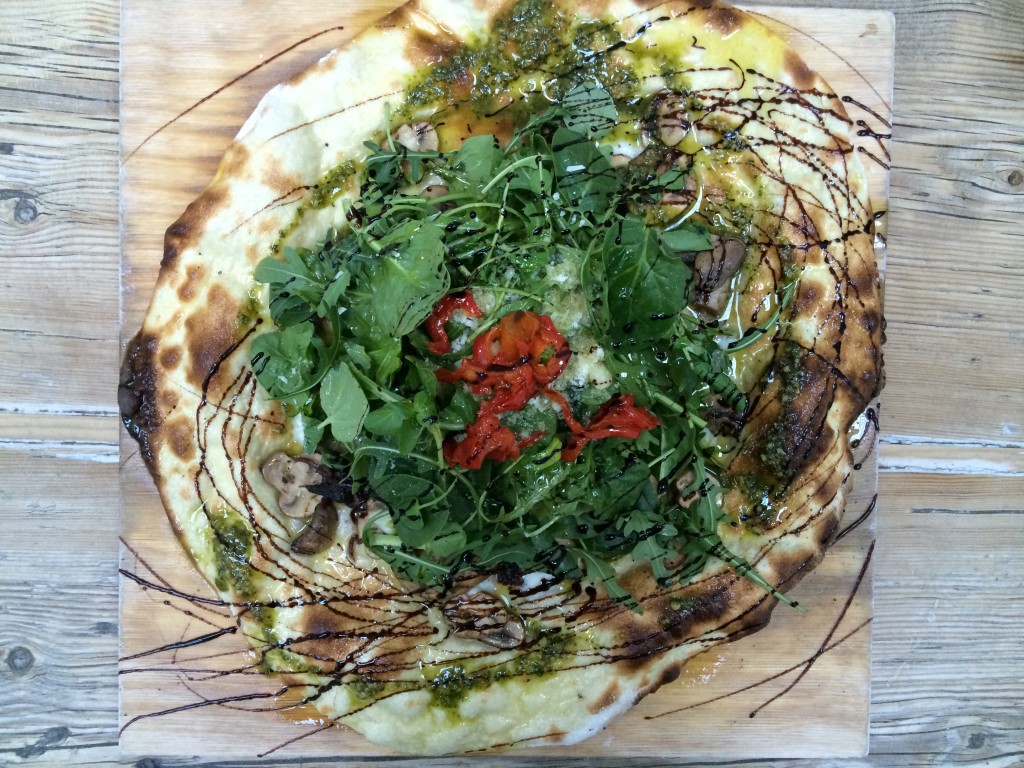 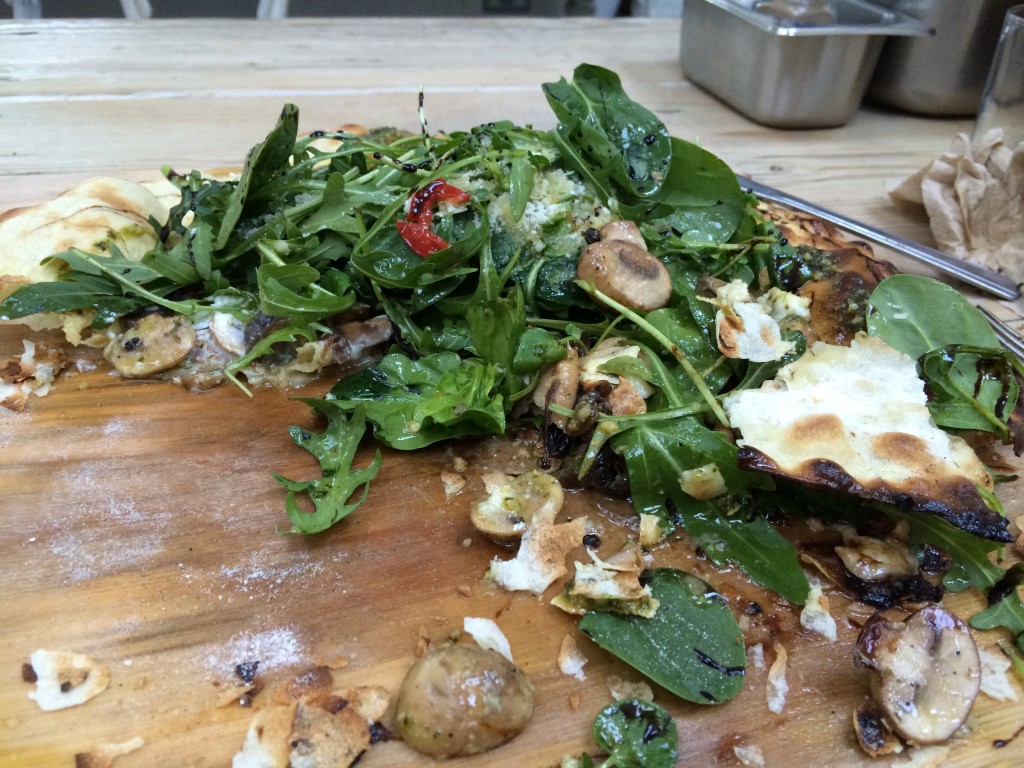 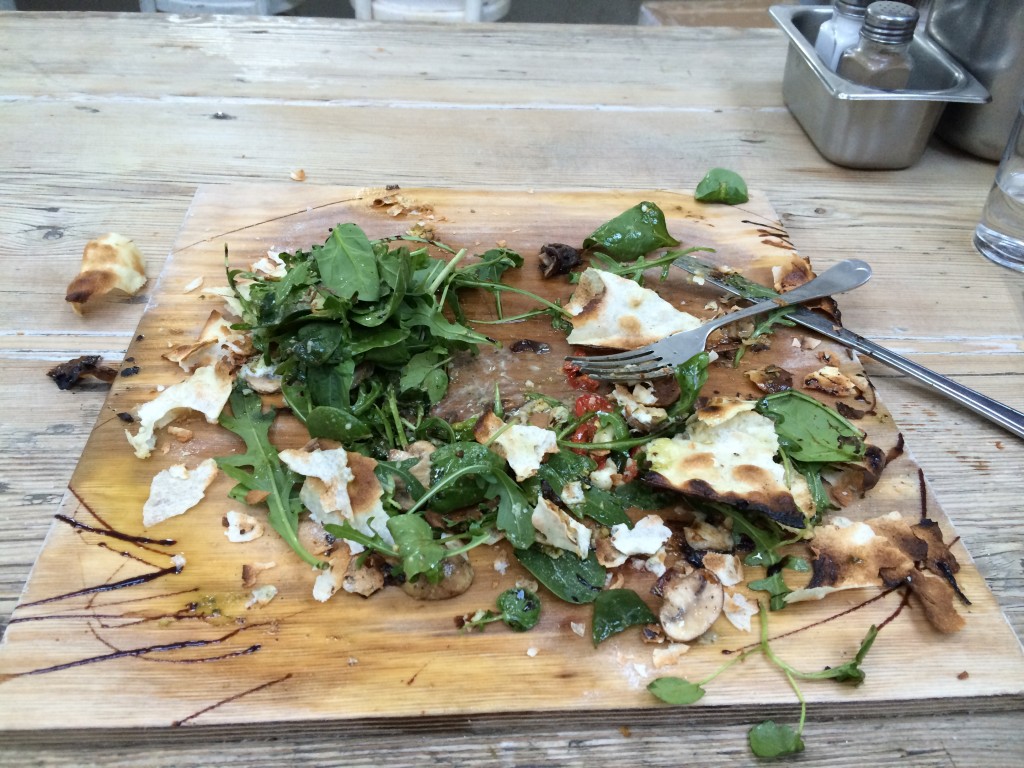 When it’s all said and done, I have to admit Story Deli is pretty awesome. The space is phenomenal (a pizza place in an art studio!) although likely short lived. And the quality of the ingredients is as good as you’ll find. I wish they’d just put those ingredients on some freshly kneaded “00” dough. Then I might consider the pies at Story Deli some of the best out there. But remember — the crust — is the most important part of the pie. And in this area, Story Deli fails.