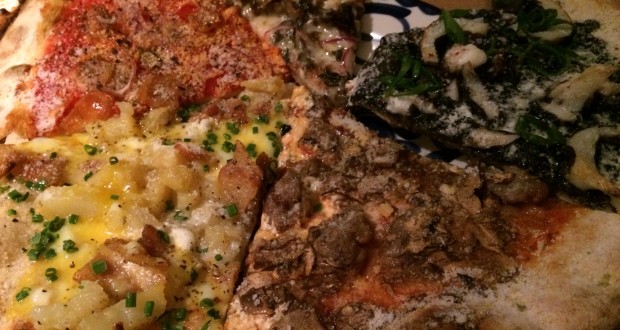 It’s been a while since I’ve reviewed a pizza place in NYC. The truth is, there haven’t been many review-worthy spots that have opened in recent months. But one place that hasn’t lacked any buzz is Danny Meyer’s new-ish spot Marta (29 East 29th Street) which opened inside of the Martha Washington Hotel last year …

Summary : Danny Meyer's pizza restaurant is hip, but the pizza isn't great. Visit here to see and be seen. But not to be fall in love with the pies.

It’s been a while since I’ve reviewed a pizza place in NYC. The truth is, there haven’t been many review-worthy spots that have opened in recent months. But one place that hasn’t lacked any buzz is Danny Meyer’s new-ish spot Marta (29 East 29th Street) which opened inside of the Martha Washington Hotel last year (the Marta vs. Martha distinction is a little confusing, isn’t it?). The restaurant boasts 11 pies (six red and five white) in addition a handful of entrees like beer brined chicken, slow roasted lamb shoulder, and grilled striped bass. Is Marta a full fledged restaurant masking itself as a pizzeria? Or is it a pizzeria that happens to have some entrees on the menu?

Part of the problem for me, is that nothing stole the show there on a recent visit. I was dining with a few bloggers from Chowzter and we ordered five pizzas and five entrees. For the purposes of this review, I will only focus on the pizza. But of the entrees, a duck special was my favorite. Nothing was bad. But there was nothing I’d rush back to the restaurant for. 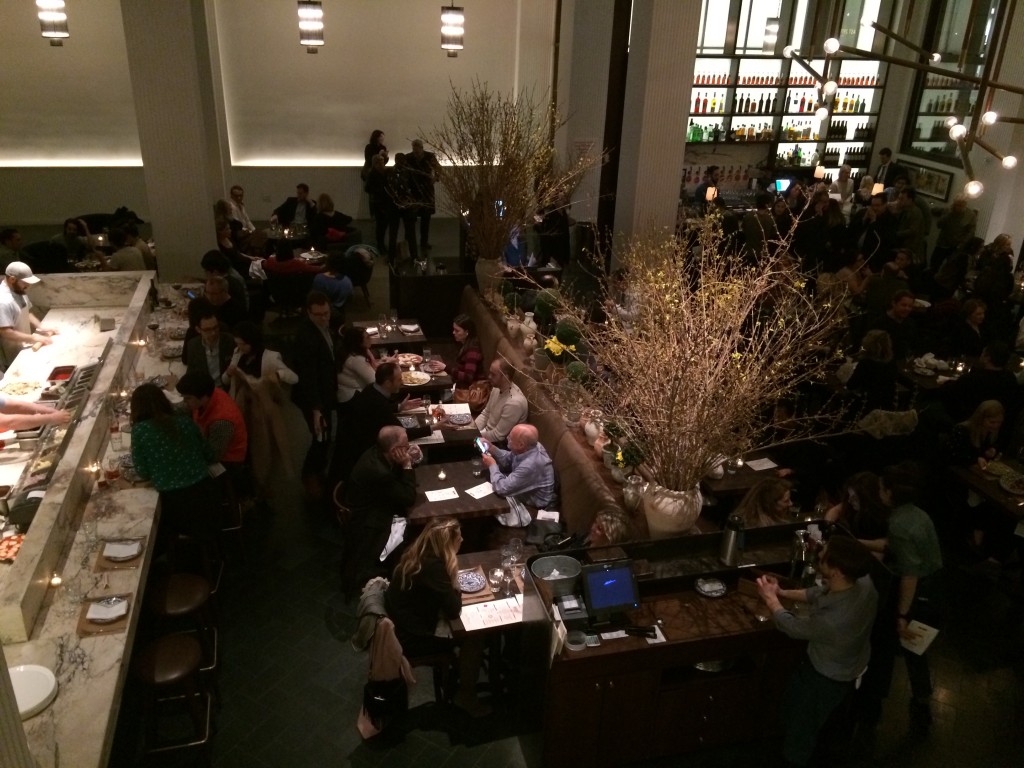 Many early reviews of Marta have focused on how awful the space is. It’s as if someone set up a kitchen and put out tables in a vast hotel lobby. I actually didn’t mind the space much. The best seats in the house are up in the balcony where you overlook the scene that’s unfolding below you. And that’s exactly what Marta is… it’s a place to be seen. How else can one explain the packed house every night. The food isn’t that great. But it’s a restaurant in a hip neighborhood (Nomad), located inside a hip institution (a hotel lobby), taking advantage of a hip concept (pizza), under the eye of a hip restaurateur (Danny Meyer). In addition, Marta has an active social media presence too (its Instagram account, for example, has twice as many followers as Mailino, another Danny Meyer restaurant located nearby). So hip!

So about that pizza. I didn’t have a clear favorite pie, but I did have a least favorite: the Patate All Carbonara. Prior to visiting Marta, I’d heard that this was a “can’t miss” pie on the menu, but I wasn’t digging the potatoes. They lacked flavor and I felt that really did this pie in. I’m a big mushroom fan, and that was featured heavily on the Funghi and Salsiccia pies. But were these in the top tier of mushroom based pies I’ve had? No. I really liked the red sauce on the Amatriciana (which also featured guanciale, pecorino, onion, and chile). But that was the only pie that featured sauce prominently (the Funghi was technically a red pie, but the other ingredients overwhelmed the sauce). And finally, we had a Seppia pie which featured cuttlefish, squid ink bechamel, scallion, and pecorino. This was certainly the most unique pie — I’m not sure I’ve ever had squid ink bechamel on a pie before — and one of the better of the bunch.

I think my biggest issue with the pizza at Marta is their crust, which is stretched with a rolling pin. Their pies all contain a cracker-like crust which I don’t find particularly appealing. It’s not quite a bar pie — it’s thicker than that. And there is a lot of it. You’ll notice in the photos below, that there is generally a decent amount of crust space on each pie. You only get 2-3 bites per slice, before you run out of toppings. If the crust was delicious, I’d be okay with that. But in my opinion it’s the least appealing part of the pizzas there.

Here’s what we ordered: 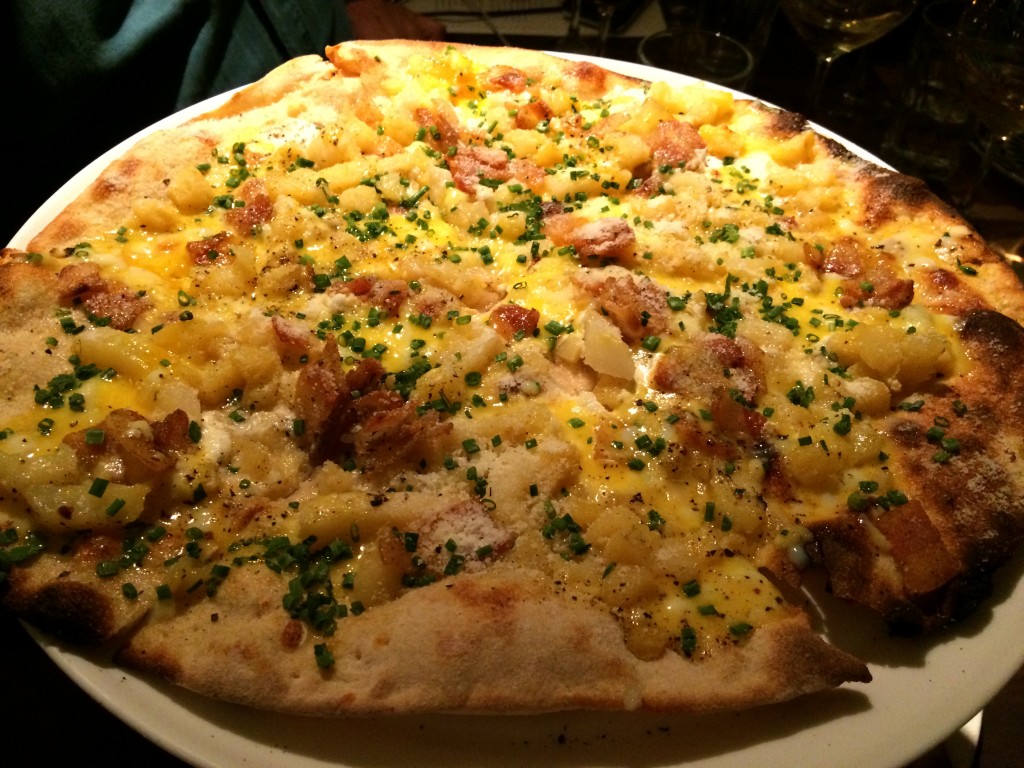 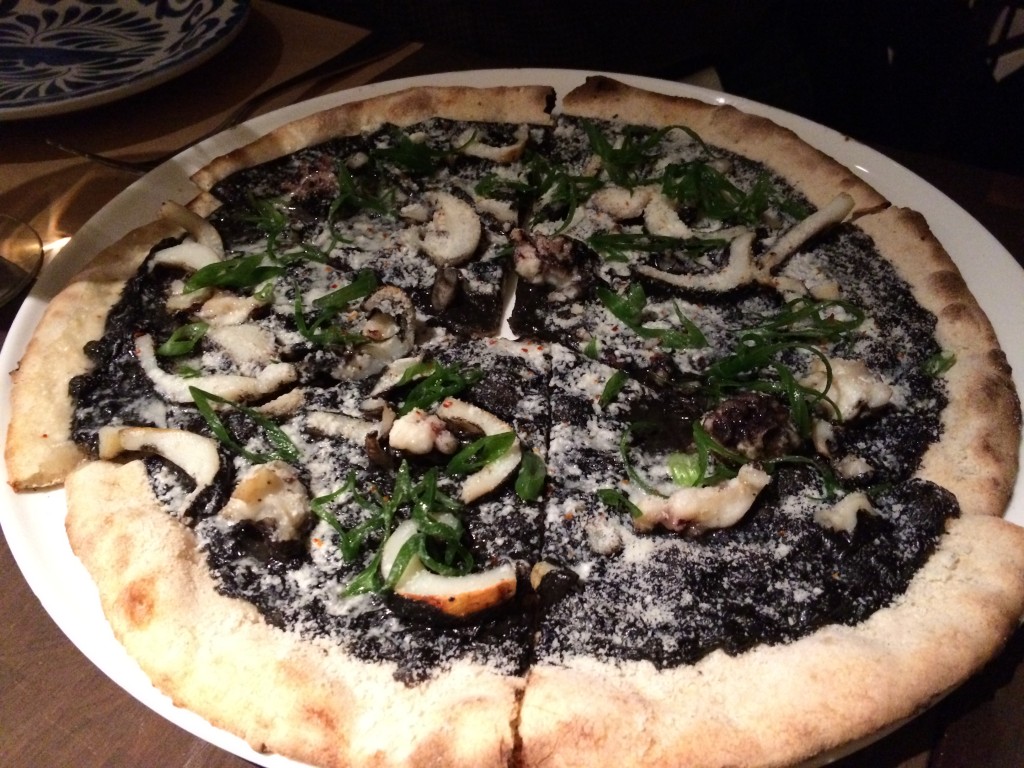 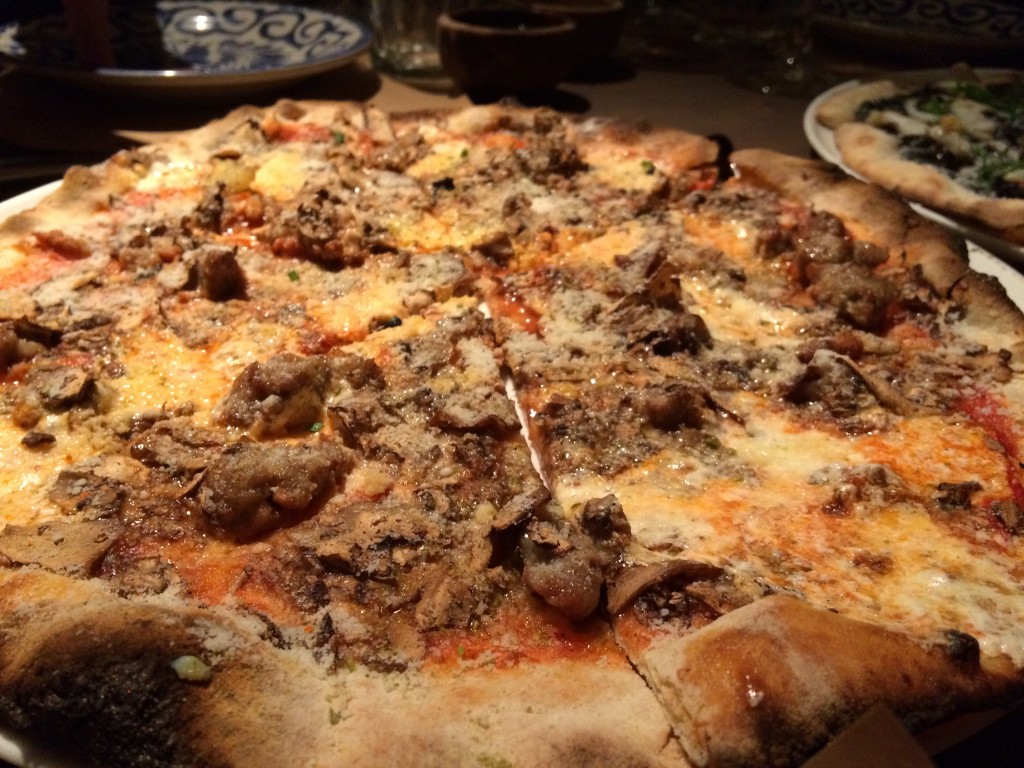 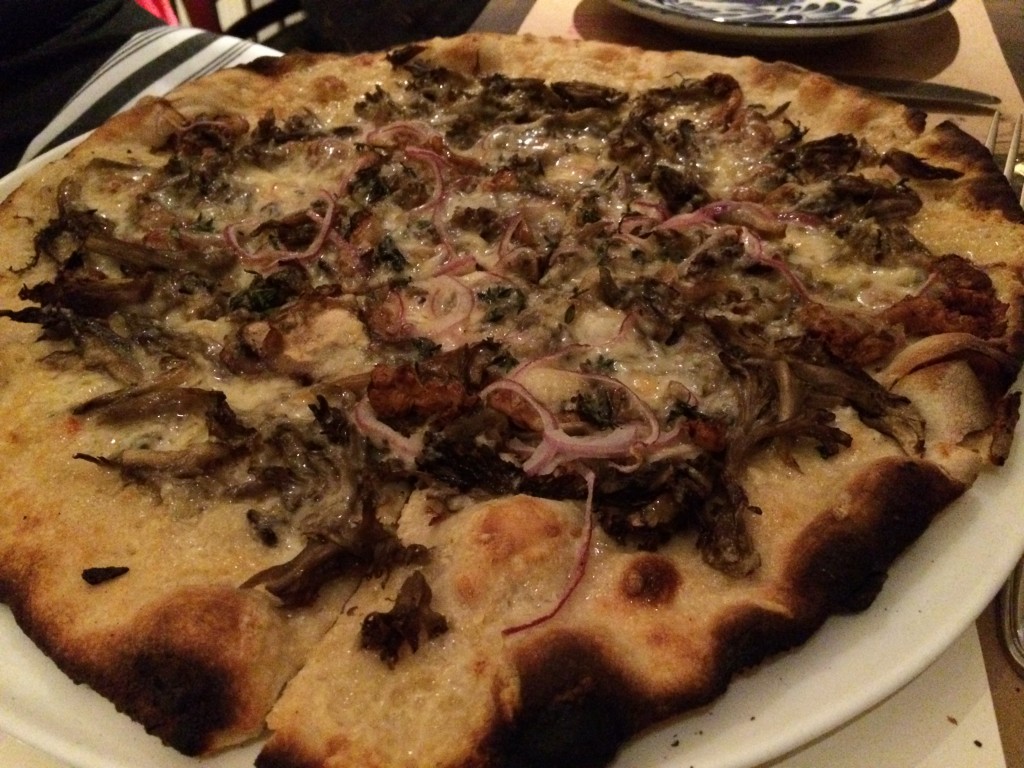 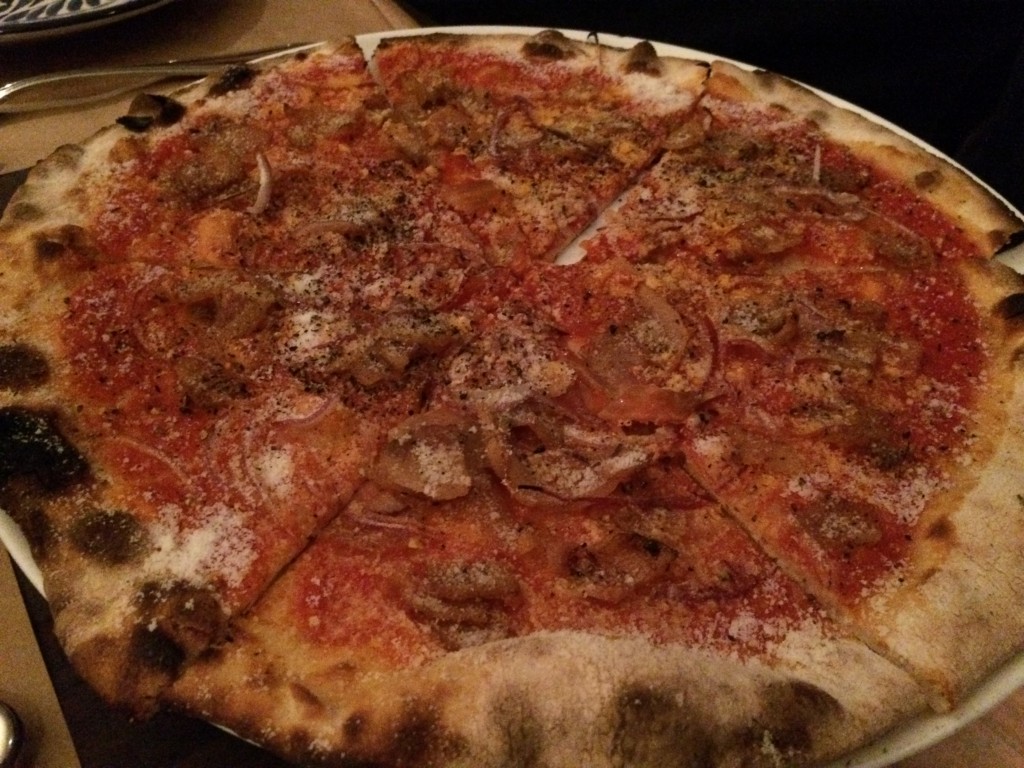 There are things to like about Marta. I’m a huge fan of Danny Meyer and the service is certainly the level of what you’d expect in one of his establishments. There is only one pie that costs more than $20 — so it’s affordable, especially given the area it’s located. And there are some other decent bites on the menu besides pizza. At the end of the day, maybe Marta is somewhere you go for dinner with some friends and start with a pizza before ordering entrees? At Upland, for example, which is a new Stephen Starr restaurant located a couple of blocks from Marta, there is also a pizza section on the menu. But it contains fewer pies (usually 3-5) and they are positioned as an item to share rather than being the star of the show. And all of the pies there are delicious. Which is more than I can say about Marta.

Previous: LA’s 800 Degrees: Cool Concept, Not So Great Pizza
Next: La Dolce Vita: Pizza With A View In Puerto Vallarta