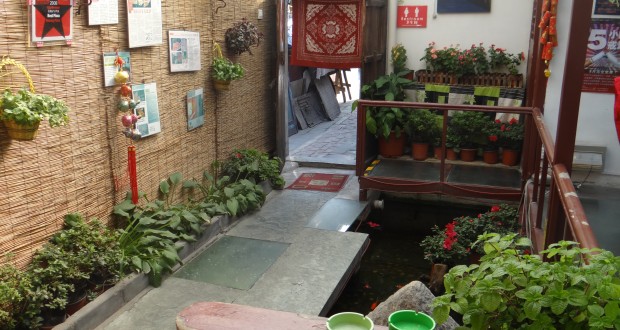 Posted by: I Dream Of Pizza in China, International, Reviews March 29, 2015

I recently went on a two week trip to China. Similar to my previous trips to Asia (Thailand, Vietnam, Cambodia, and Japan), I was not planning on eating too much pizza throughout my travels. Every pizza meal results in one less bowl of noodles or basket of dumplings. But I made it a point to …

Summary : This pizzeria is located in such a cool space, down a hidden alleyway in Beijing. But the pizza is nothing to be desired.

I recently went on a two week trip to China. Similar to my previous trips to Asia (Thailand, Vietnam, Cambodia, and Japan), I was not planning on eating too much pizza throughout my travels. Every pizza meal results in one less bowl of noodles or basket of dumplings. But I made it a point to try one pizza place and some online research led me to Hutong Pizza in Beijing (9 Yindingqiao Hutong). 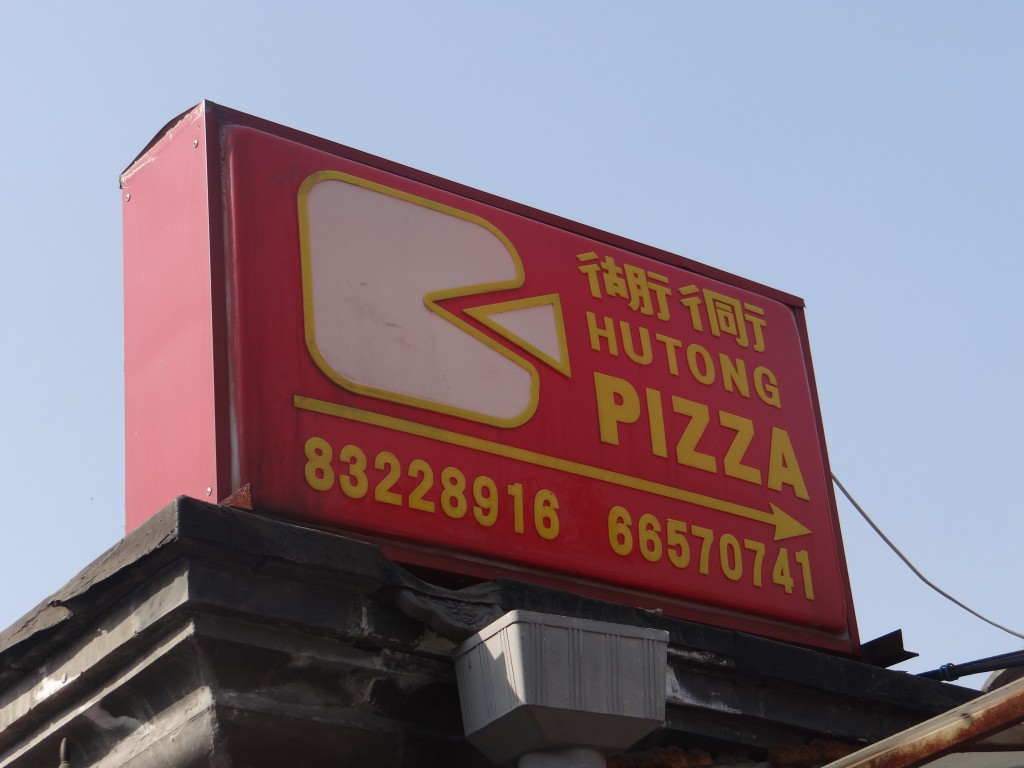 So… pizza in China. Not normally what you’d associate with the world’s most populous country. But with nearly 1.4 billion customers, it’s no surprise that there is a market for pizza there. While there is certainly not a pizzeria on every block, wander around any of China’s major cities and you’re certain to come across a spot here and there. Sometimes that spot would be a Pizza Hut location or other American chain, however there was certainly a fair share of independently operated places too.

When doing research about where to get pizza in Beijing — the world’s third largest city with a population of 21 million people — I came across a helpful contest that a local website was running. The Beijinger pitted the city’s top 64 pizzerias against each other in a March Madness style tournament and let the general public vote on their favorite (you can see the initial bracket here). When I embarked on my trip, voting was not yet open, but I had the field help me. One place that stood out to me was Hutong Pizza. It was a #4 seed (so a bit of an underdog to go all the way) and I was intrigued by its name. A hutong is simply a narrow lane or alleyway  — and Beijing is characterized by its hutongs. Much of the city used to be comprised of hutongs, but many of them were destroyed for modern development and skyscrapers. The ones that remain are really special places to navigate.

It’s worth noting that upon returning from my trip, I checked out the bracket and it turns out Hutong Pizza was eliminated in the second round by a pizzeria named Gung Ho! Gourmet Pizza Factory. That’s not surprising. It wasn’t that good. But what a cool space it was!

As you can tell from the photo below, despite being located in a hutong, there is plenty of signage directing you to the pizzeria. In fact, it’s hard to miss! It’s located right near the west bank of the Qianhai Lake, which is a happening part of town… especially at night when the establishments along the lake are covered in Christmas lights and music is pumping out of the dozens of bars in the area. But I was there during the day time when things were much more mellow. 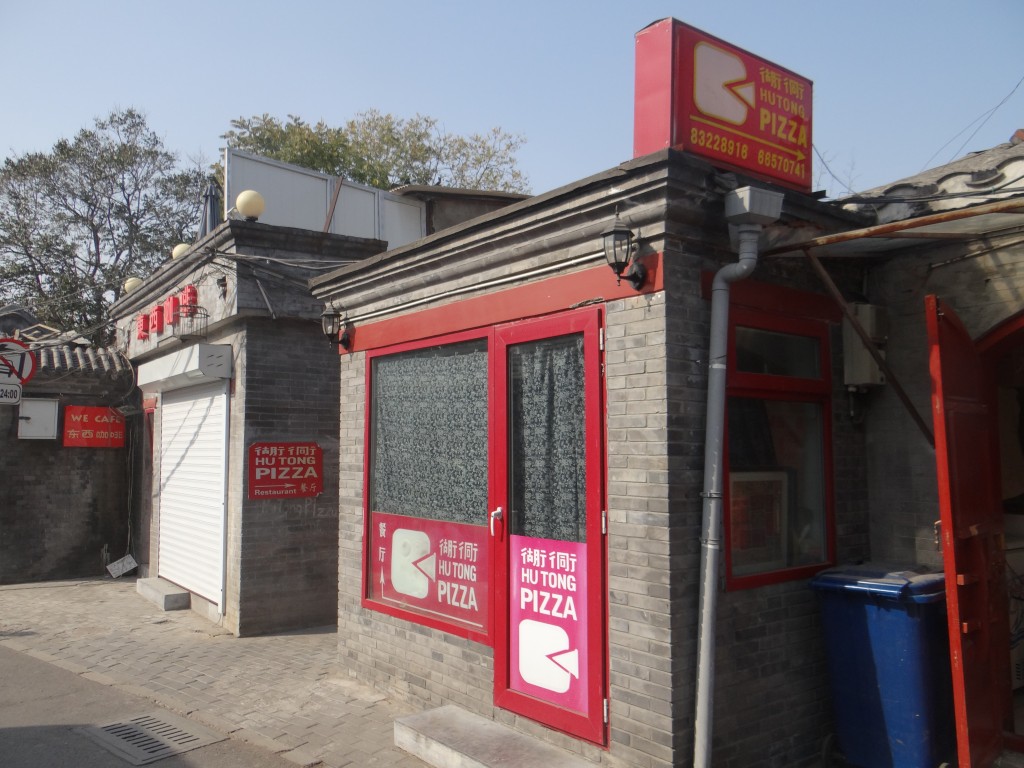 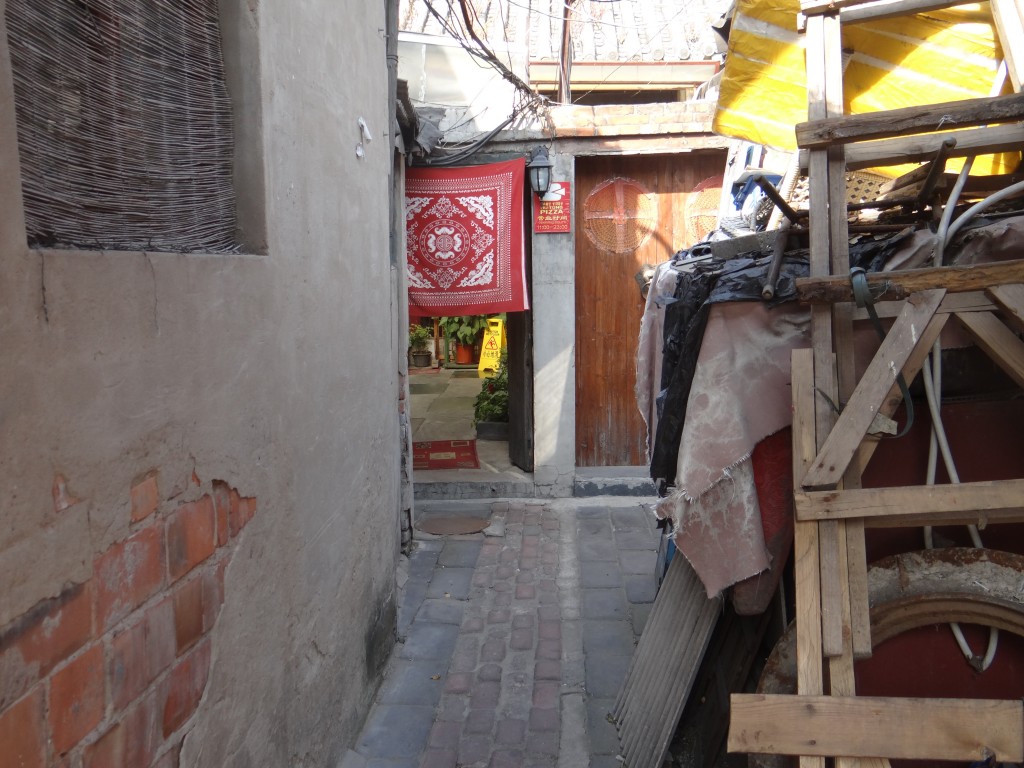 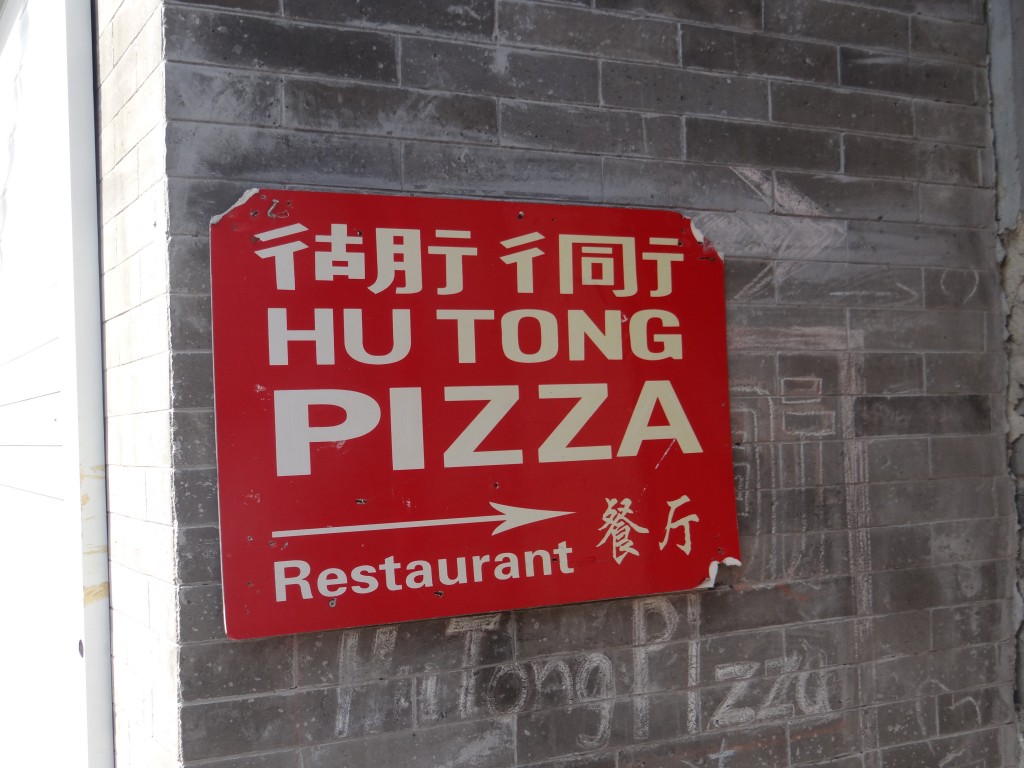 Upon entering the restaurant you feel as if you are in an ancient Chinese garden. Which makes sense because, after all, I was in China! The walkway even has fish swimming underneath it. To the left is a family-style table for large groups (although I suppose the tables there can be separated for smaller parties). 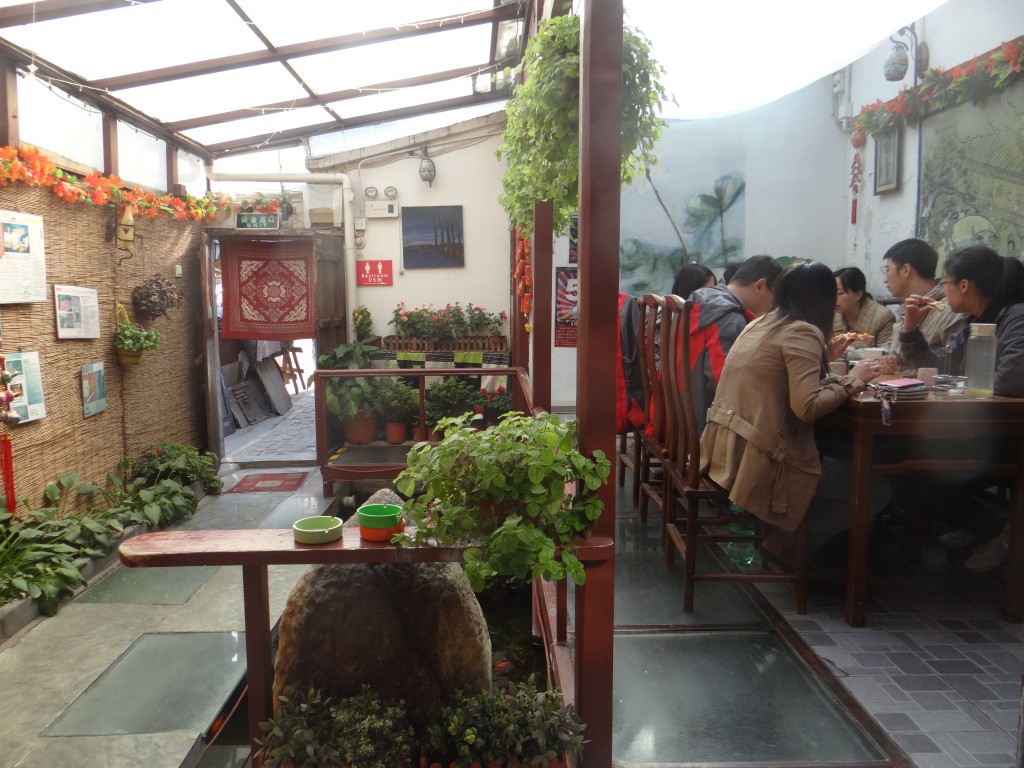 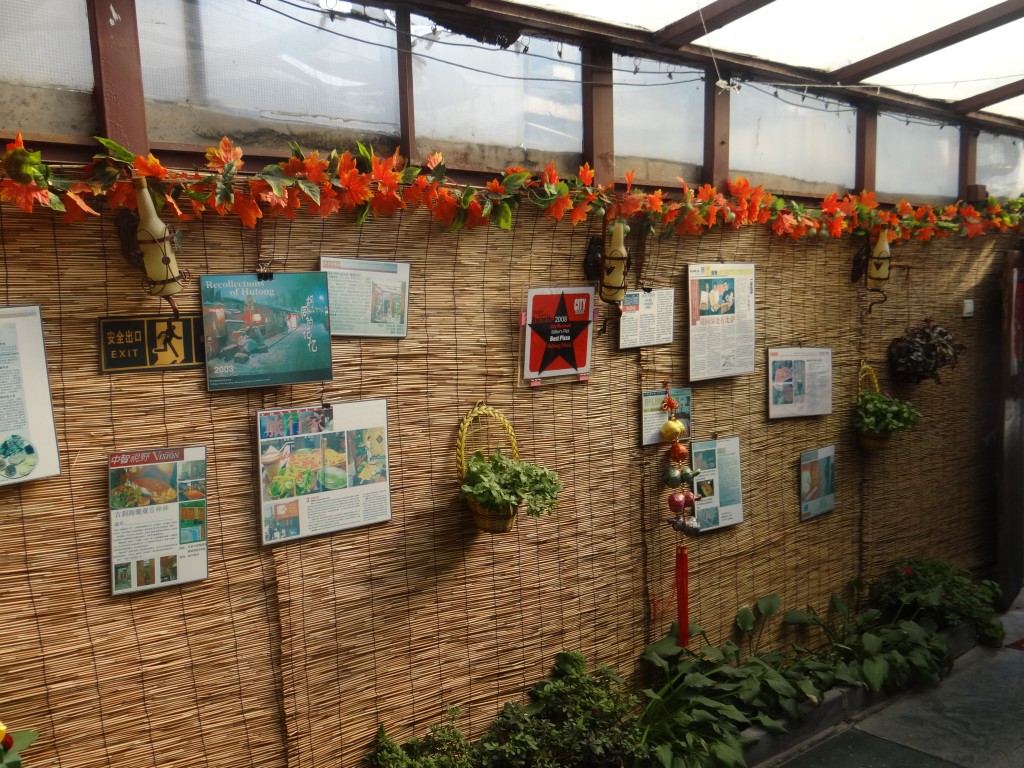 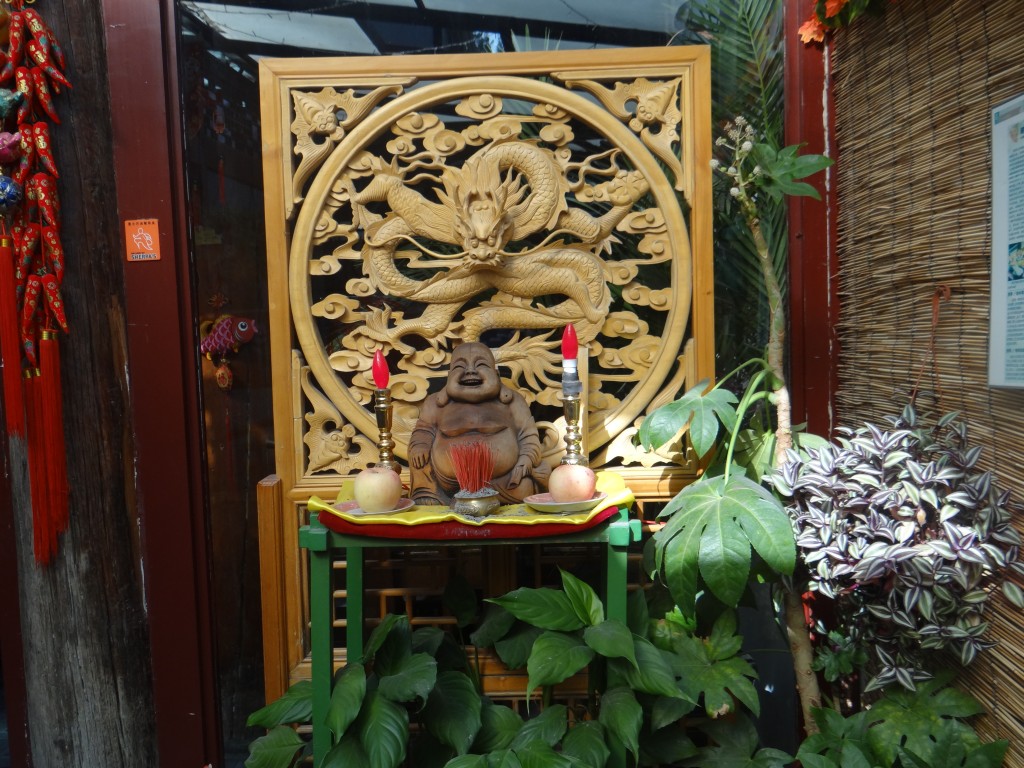 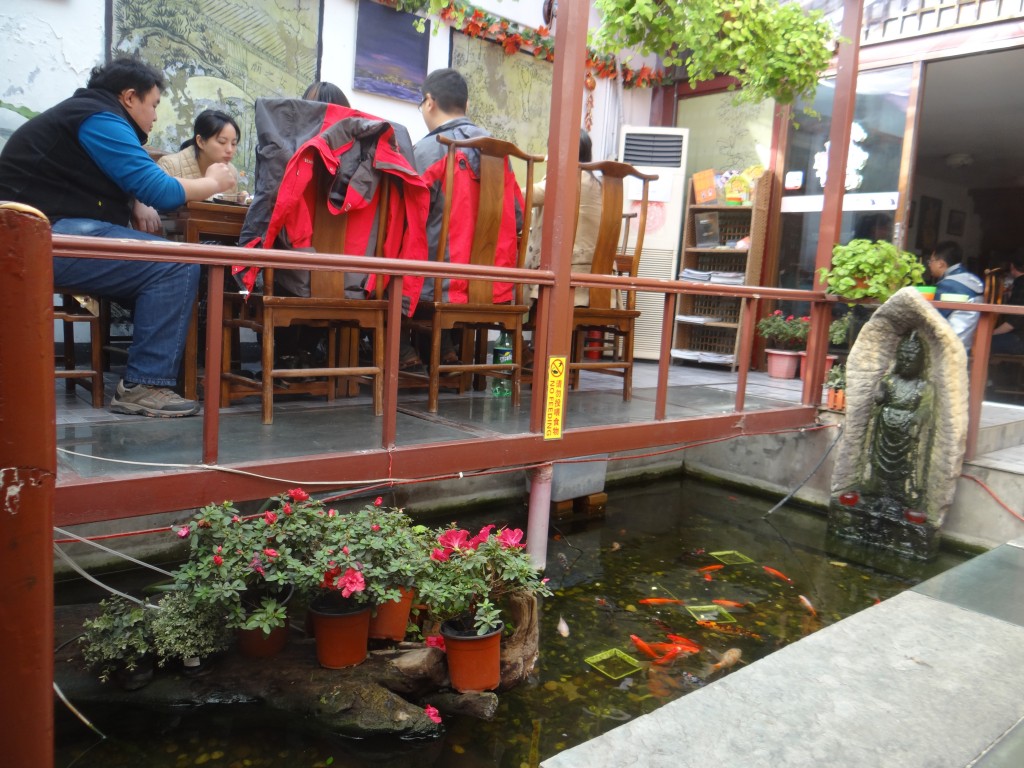 We headed to the back room which seats about 25 people. On a Monday around lunch time there were a couple of other parties there. What was not in use was seating on the second floor. But I “snuck” up to grab a pic. Just another cool aspect of the space. 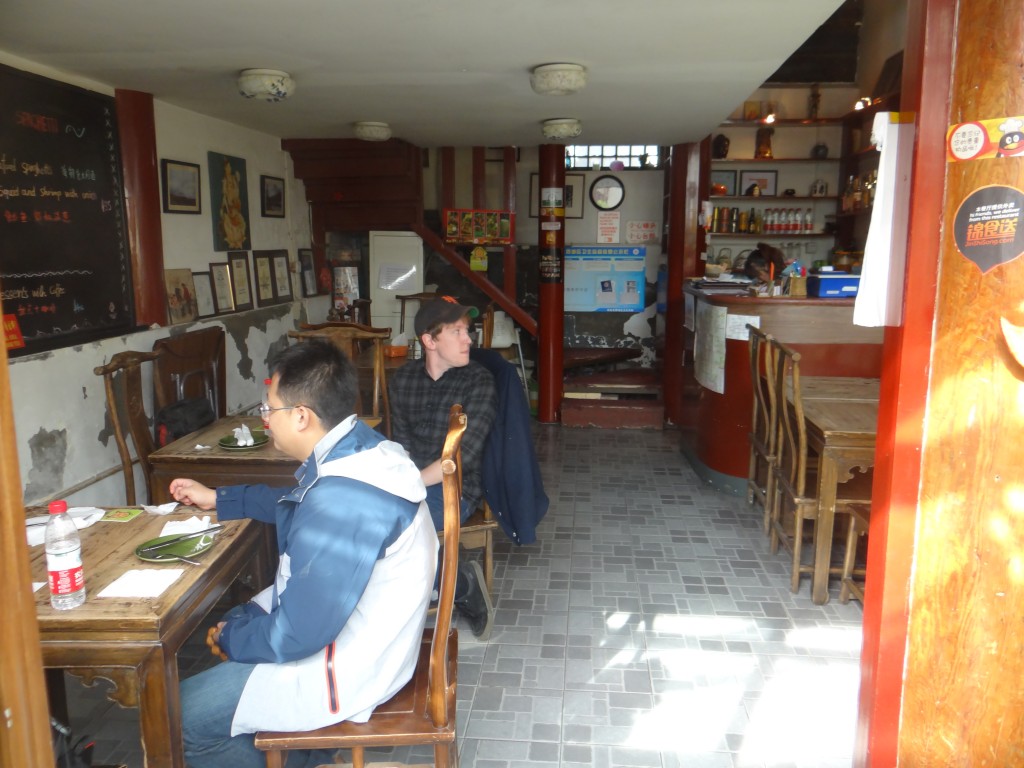 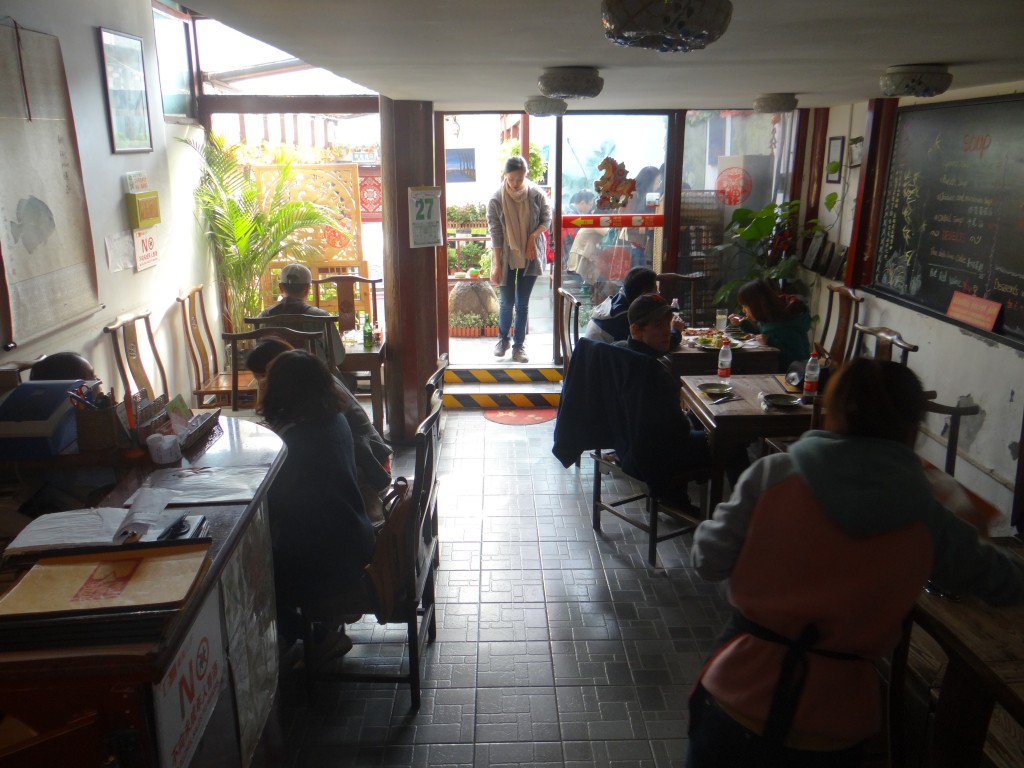 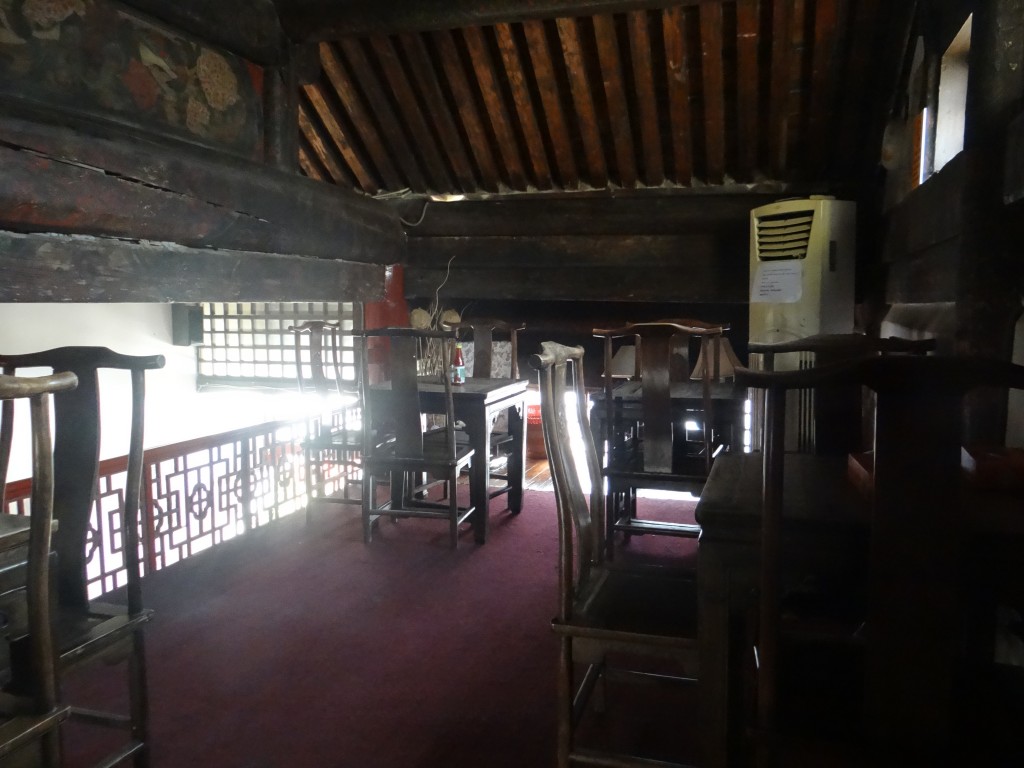 The menu — which is in both English and Chinese —  has 13 “vegetarian and seafood” pizzas and 15 “meaty” pizzas. Some topping combinations you’d probably recognize from pizzerias in the US, but others seemed strange to me. One thing that was consistent, however, was that almost all of their pies seemed to contain too many toppings. For example, a chicken curry pie contained: mozzarella cheese, tomato sauce, curried chicken pieces, green peppers, fresh chilies, natural yogurt, fresh mint, onion, and mozzarella. First off, I know they listed mozzarella twice (what’s up with that?). But yogurt? No thanks.

We kept things simple and ordered a “cheese and tomato” pie, along with a “pumpkin mushroom” pie. The later sounded particularly interesting as it contained pesto, mozzarella, pumpkin, mushrooms, and apple. 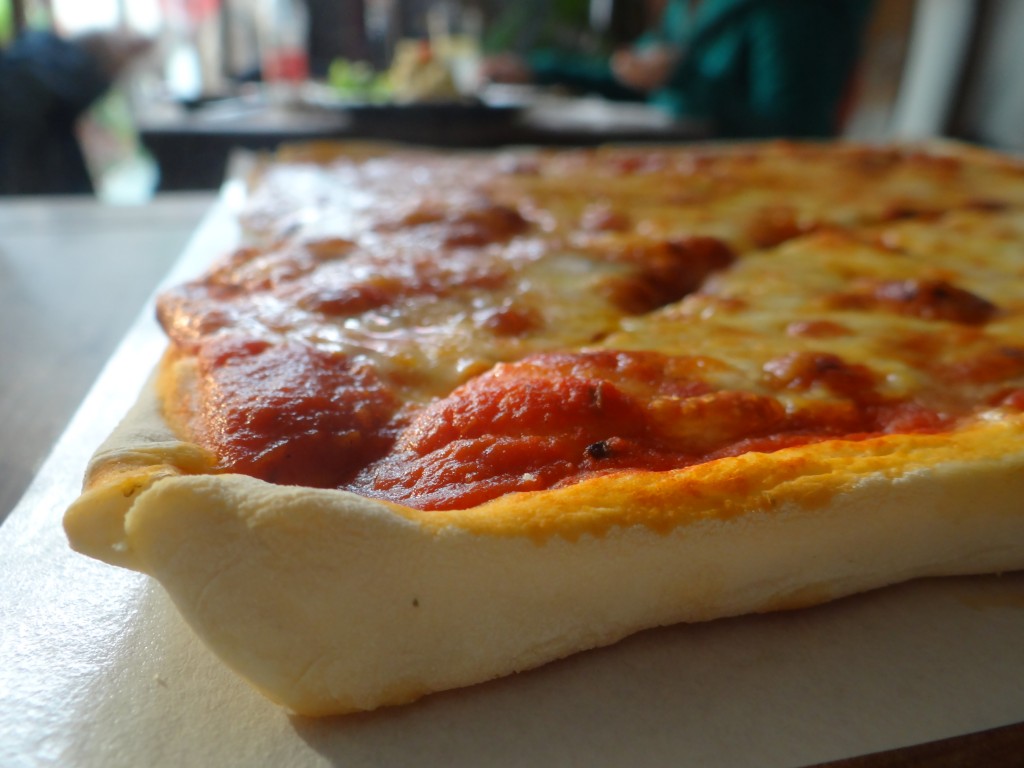 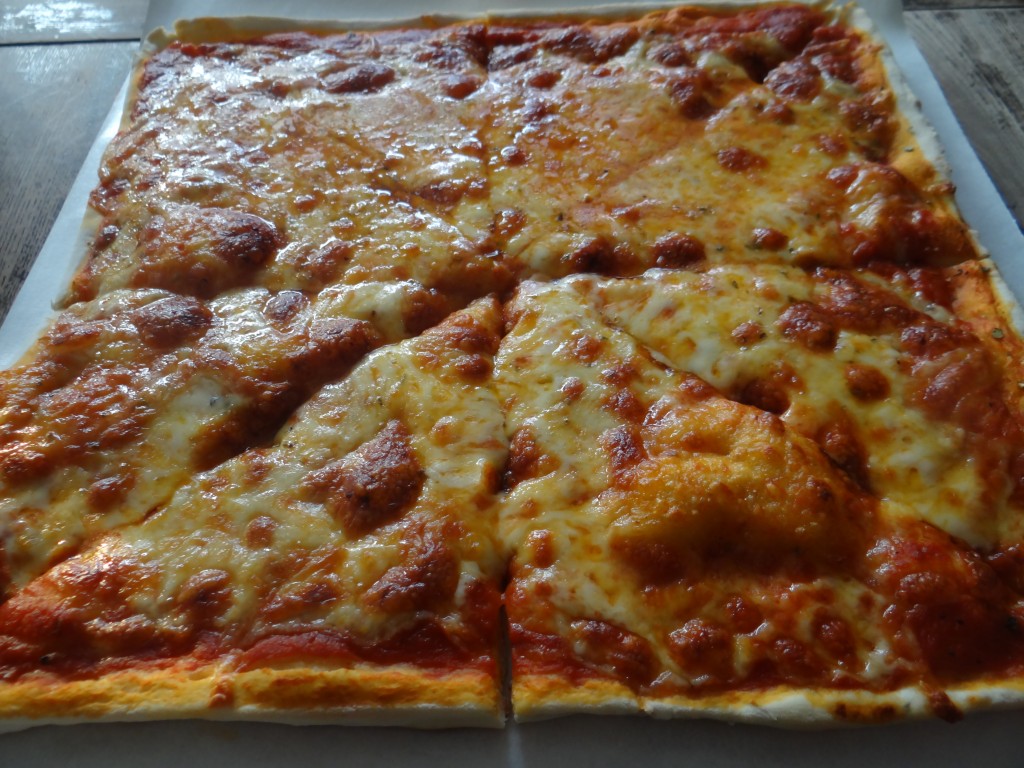 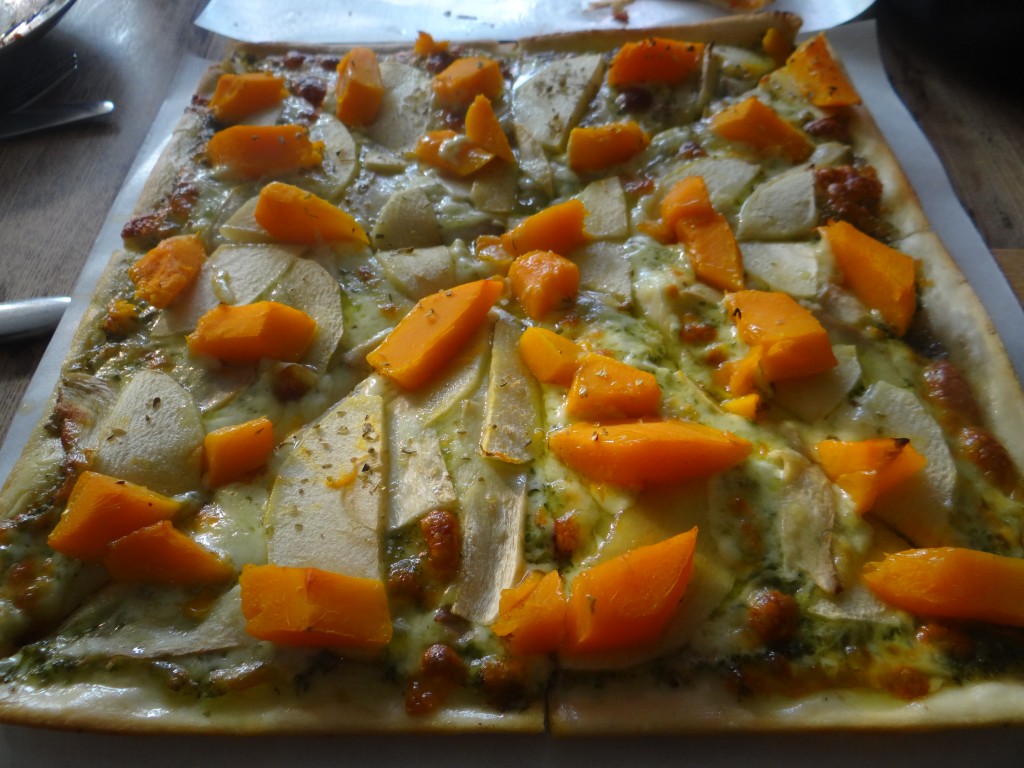 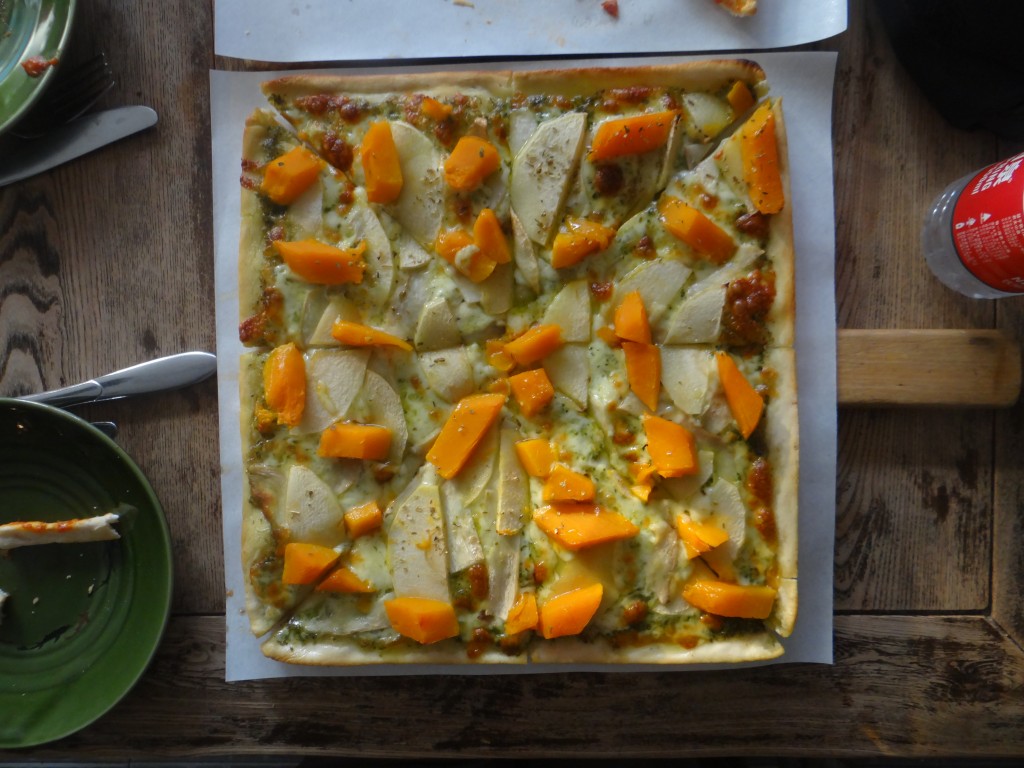 The pizza was not very good. The crust was an odd texture — it sort of tasted like it wasn’t fully cook, but also managed to fall apart. The cheese was not good quality. And on our second pie, I expected some sort of pumpkin sauce, but there were actual pieces of pumpkin thrown onto the pie. It seemed like the pumpkin had been put on pre-oven, but obviously needed more time to cook and soften. The pesto was impossible to taste. And apple and mozzarella cheese don’t go that well together. So it was a strange pie. I preferred the cheese and tomato pie, but even that wasn’t much better than what you might find at a fast food spot in the US.

In addition to the disappointing meal, Hutong Pizza is expensive by Chinese standards. Small pies start at 68 yuan (about $11) and run up to 93 yuan (about $15). Large pies top out around 135 yuan ($22). It was one of the most expensive meals we had during our trip.

So if you find yourself in China. Skip the pizza. Eat some dumplings.

Curious where you should eat in China? Check out this document I put together: Where To Eat In China (Beijing, Xi’an, Shanghai)

Previous: I Dream Of Pizza Featured on Pizza TV
Next: EVO in Charleston Makes Solid Pies With Creative Toppings