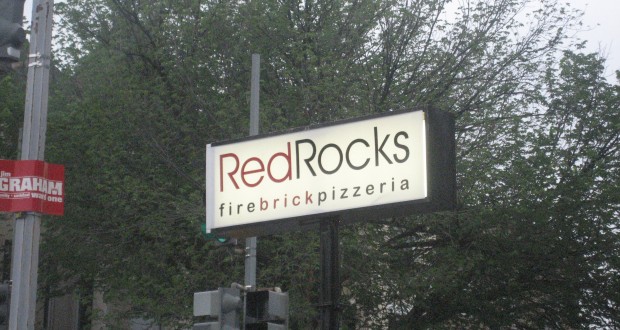 I grew up outside of Washington, DC and I’ve always believed that there isn’t really anywhere to get great pizza there. This view has been solidified, having spent the past eight years in New York City. And it is frequently confirmed by my friends who live in Washington. In fact, Washington is probably better known …

I grew up outside of Washington, DC and I’ve always believed that there isn’t really anywhere to get great pizza there. This view has been solidified, having spent the past eight years in New York City. And it is frequently confirmed by my friends who live in Washington. In fact, Washington is probably better known for its jumbo slices than the quality of its pies. This is not to say that there isn’t a huge pizza scene in Washington. New places appear to be popping up with great frequency and there is definitely a lot of debate as to what the best pizza in the area is.

Although I haven’t been to a whole lot of places in Washington, I’ve found what I consider to be the city’s best: RedRocks (1036 Park Road, NW). I plan to visit many more places in the future, so it is yet to be seen if RedRocks will live up to other area pizzerias. But for the time being, there is no doubt that RedRocks serves the best pizza I’ve had in Washington. Perhaps this is due to the uncanny resemblance it has to a New York City pizza place. 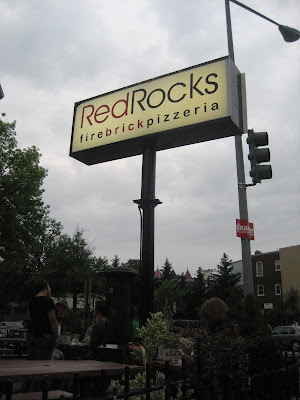 The first thing I noticed when I walked in was that there were two televisions at the bar. One was playing the Yankees game and the other was playing the Mets game (they happened to be playing the Nationals). On tap — what else, but beer from Brooklyn Brewery? And once the pizza came out, it would have been possible to convince me that I was still in New York.

But before I get to the pizza, there were some other things I liked about the place that were unique to Washington — for instance, the space itself. Where as most New York pizza places are attached to larger buildings or stand still structures, RedRocks appears to have taken over the space of a two story townhouse. The bi-level seating areas make it easy to accommodate private parties, while not having to shut down the whole restaurant. Downstairs – where the kitchen is located – there is room for about 30 people in addition to a bar. And upstairs, there is room for another 30 people or so. There is also an outdoor area. There was a small wait on the Thursday evening I was there. 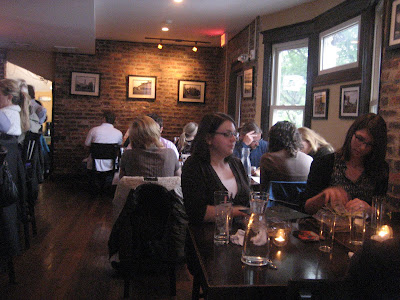 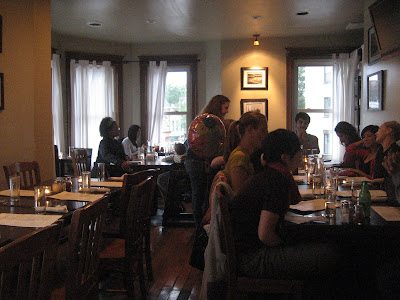 Another thing I liked was the fact that their menu provides a bit of an explanation about their pizza making process. It reads:

Welcome To RedRocks! We proudly serve authentic Neapolitan Pizza. We use Caputo “00” flour, imported Italian tomatoes, and only fresh mozzarella, including Buffalo mozzarella on our Margherita pies. Our pizzas are cooked in an authentic Italian wood-burning brick oven that keeps temperatures near 900 degrees. High heat creates unique flavors through caramelization of sugars, as well as interesting textures – it is not uncommon to find at least once flame-blackened blister on our crust. Our pizzas are approximately 11″, ideal for one person! 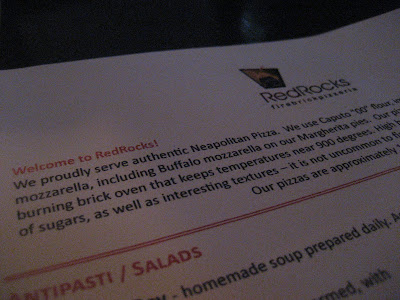 What a great write-up. I assume that most people are unfamiliar with what exactly a Neapolitan pie is and this introduction gives a great overview of the process. They mention the ingredients which make their pies unique, the way in which the pies are cooked, and even the size of the pies. I’ve never seen this before. Perhaps pizza places in New York City are too pretentious to include this type of explanation on their menus (Huh? You don’t know what a Neapolitan Pies is? Get outta here!), but I found it very helpful and informative. Especially given that oven temperatures and other factors can vary, this is a nice preface for what’s to come.

My party of five ordered five pies and they were each great.

First off – that description wasn’t kidding about flame blackened blisters. Check out this scorched bubble on our Ananas pie! 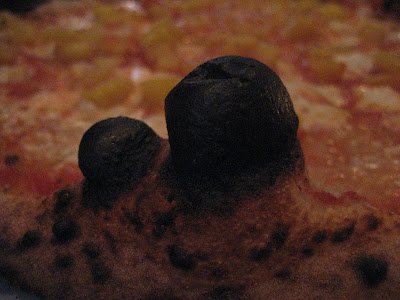 As you might recall, I had my first pineapple pizza in some time at Roberta’s recently. It’s rare to find pineapple as a topping at a Neapolitan pizza place in New York City, so I was curious how this would fare. And to be honest, I’m still torn. I love pizza. And I love pineapples. But I’m still not convinced it’s an ideal topping for pizza. The pie tasted great, but there is just something about it that feels un-pizza like.The Margherita was a very solid base for our group of pies. Unlike some other places I’ve been to recently, the basil was pretty well distributed. The crust was cooked to perfection. It was the best pie I had at RedRocks. There were also fans of the Marinara pie which had a bit of a kick to it from the spicy marinara. I’m not much of a fan of marinara pies, but for those who don’t like cheese, it’s a good option. The Pesto pie was also quite tasty. I was glad the pesto was used in moderation, as not to overwhelm the other flavors of the pie. The ricotta and the cherry tomatoes added a nice touch. Great topping combinations.

I’ve noticed other places in Washington that separate white pies (cheese based pies) from red pies (sauce based) on their menus — another thing I rarely see in New York City. I suppose it’s a good tactic, as it helps diners select a wide range of pies. A couple, for instance, might have an easier time deciding to get one pie from each list.

At the end of the day, it would appear that there are some very New York-like things going on at RedRocks (which is great!) and some very un-New York-like things going on there too (which is also great!). They’ve adopted the best parts of the New York pizza scene and put a Washington spin on it. The result is one of Washington’s most talked about pizza places — and hopefully an example for future pizza places in the area to emulate.

Here are photos of our pies: 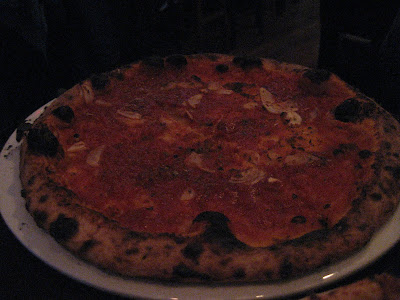 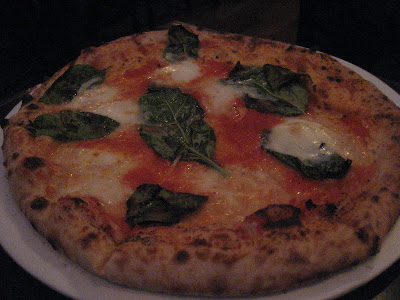 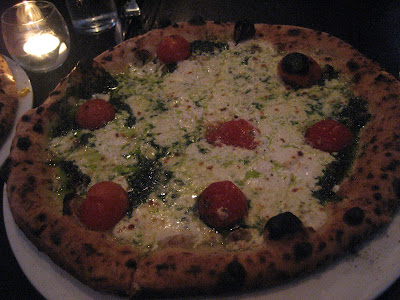 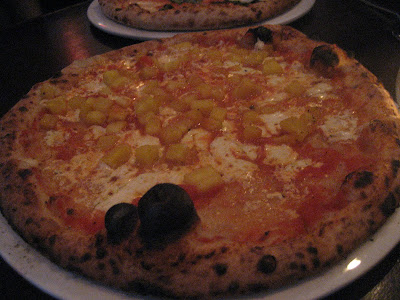 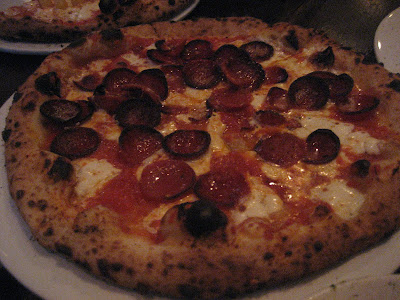