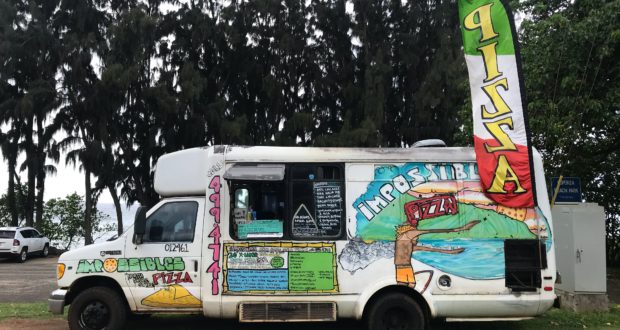 Impossibles Pizza: Pies From A Van On Oahu’s North Shore

Impossibles Pizza: Pies From A Van On Oahu’s North Shore

The North Shore of Oahu is known for its surfing and its shrimp trucks, not for its pizza. But as I was driving along Kamehameha Highway – the North Shore’s main roadway – on a recent vacation, I came across a man… in a van… serving pizza. His truck looked like it belonged outside of …

Summary : Enjoy pizza with a view when you grab a pie from this van parked along Oahu's North Shore.

The North Shore of Oahu is known for its surfing and its shrimp trucks, not for its pizza. But as I was driving along Kamehameha Highway – the North Shore’s main roadway – on a recent vacation, I came across a man… in a van… serving pizza.

His truck looked like it belonged outside of Woodstock (or maybe Burning Man) with hand scrawled menus and pizza artwork covering every exterior surface. But it was the pizza “flag” that caught my attention. So as any astute pizza blogger should do, I pulled over to investigate. 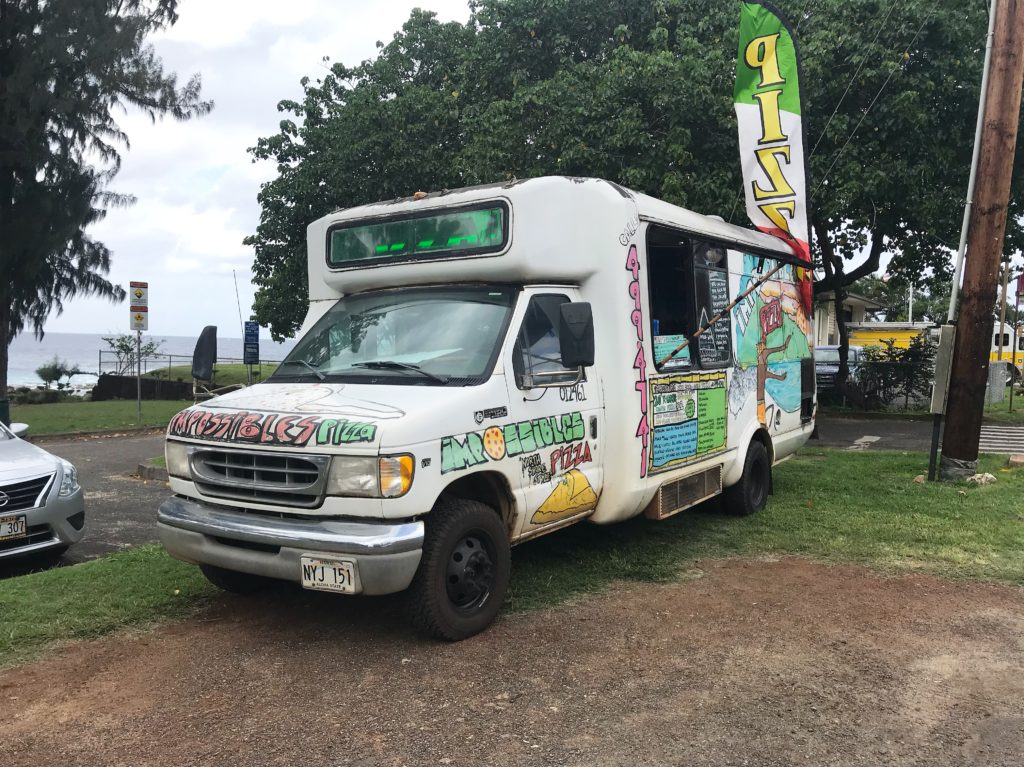 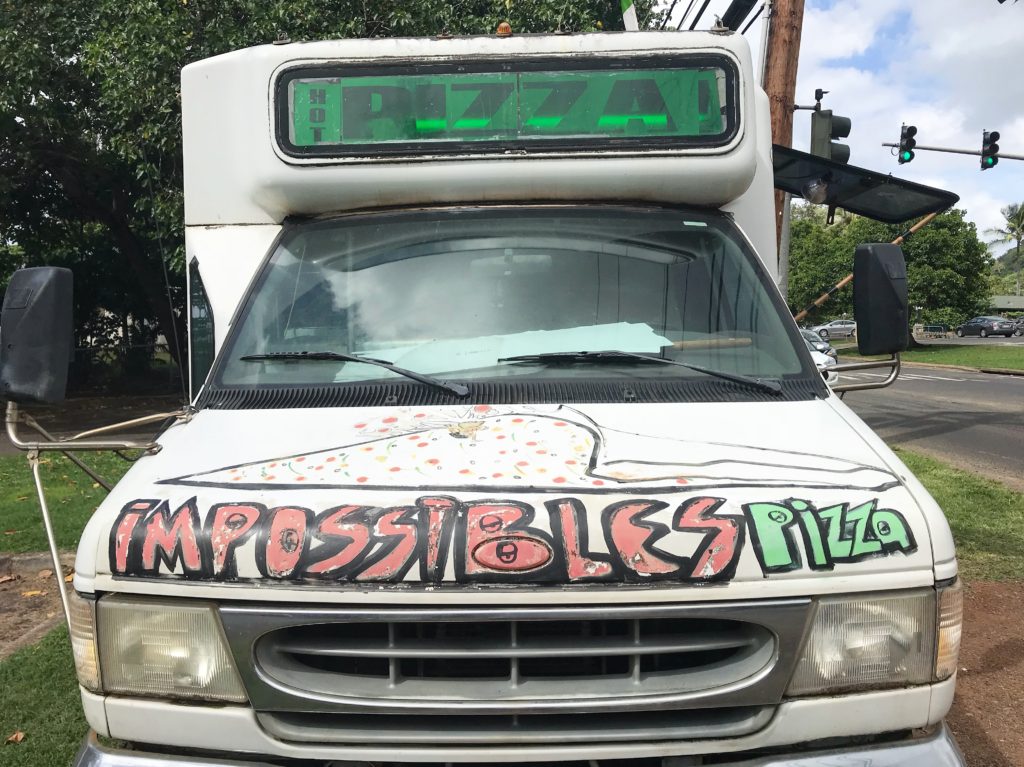 The truck – more formally known as Impossibles Pizza (that’s right, plural, no apostrophe) — has been serving slices and pies for a decade, according to the owner. They are open from 3PM-8PM on Thursday, Friday and Saturday. For what seems like a laid back operation, there are an abundance of rules on the truck:

– No Slices After 6PM. Slices Are Served from 3PM-6PM Only 🙂

– Please Be Patient. Only 1 Person Runs This Truck (Me)… And I Run At Max Capacity

– We Stop Taking Orders For Custom Pizzas At 6 Or 7.

The last one is my favorite. Is it 6PM? Or 7PM? Why even specify if it varies?

Only one size pie is served (extra large). And it’s cash only (there are no signs that indicate that, but it’s a safe assumption by the operation at hand). There was one special listed when I visited (spinach, jalapeno, pepperoni, Maui onion, and goat cheese) in addition to eight “awesome pizzas” including BBQ Kalua Pig, Thai Chicken and Pesto Veggie. Then, on another part of the truck, there were 13 pies listed (presumably, less awesome pizzas?) like Meatlovers, Super Hawaiian, and 6 Veggie. Finally, in another section, there are 26 toppings listed if you want to build your own. It’s about as disorganized of a menu as you’d expect to find, given that it’s hand written on the side of a van.

I ordered (an extra large) pie – half cheese and half special (sans pepperoni). 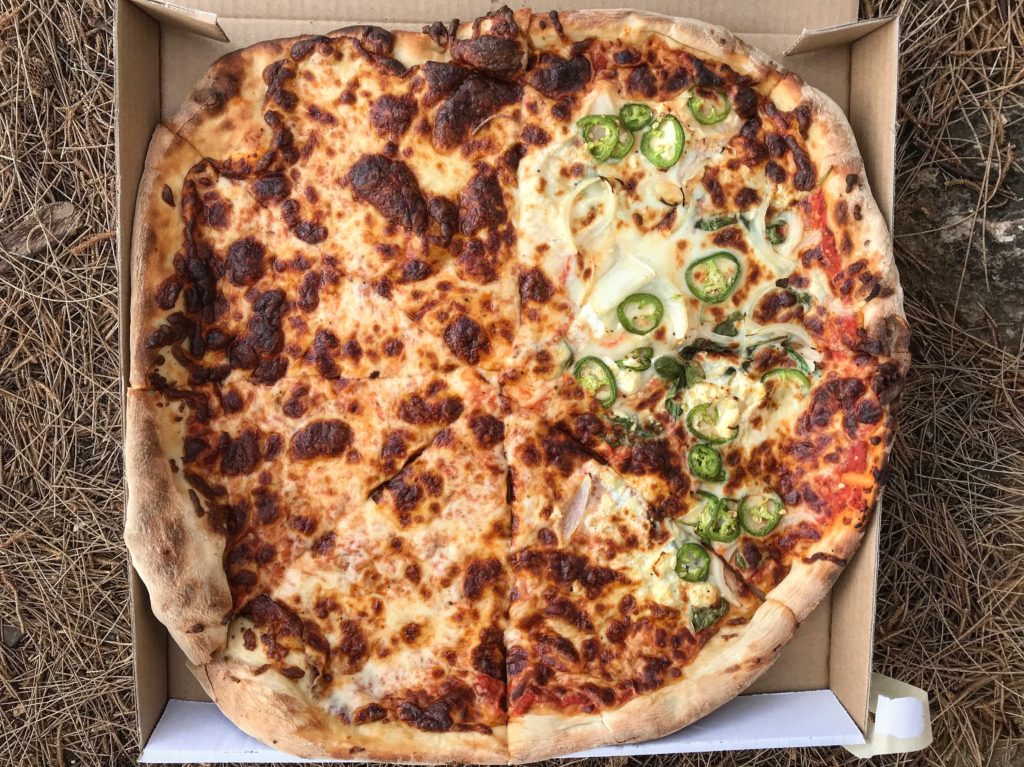 Before I get to the pizza itself, let’s talk about the prices. Slices are $6, which makes Di Fara’s $5 slices look like a steal. And whole pies start at $22. There are no other prices listed (other than $2 for a 4 ounce cup of ranch). I was charged $26 for my pie.

Each pie takes about 15 minutes to make, so the wait can vary depending on how crowded it is. On a Friday afternoon around 3PM, I was the only one there. There is a phone number listed on the truck (499-4741) and a few regulars did seem to come by to pick up phone orders. I suppose Impossibles isn’t on Seamless…

The pizza itself was good – better than what you’d expect to find on the side of a highway in Oahu. It was very cheesy and resembled a classic NYC slice. I much preferred the cheese slices over the special. The vegetables on the special were raw, and had the onions been sautéed, I think I would have enjoyed it more (but again, there is only so much you can expect from one man operating part-time out of a van. 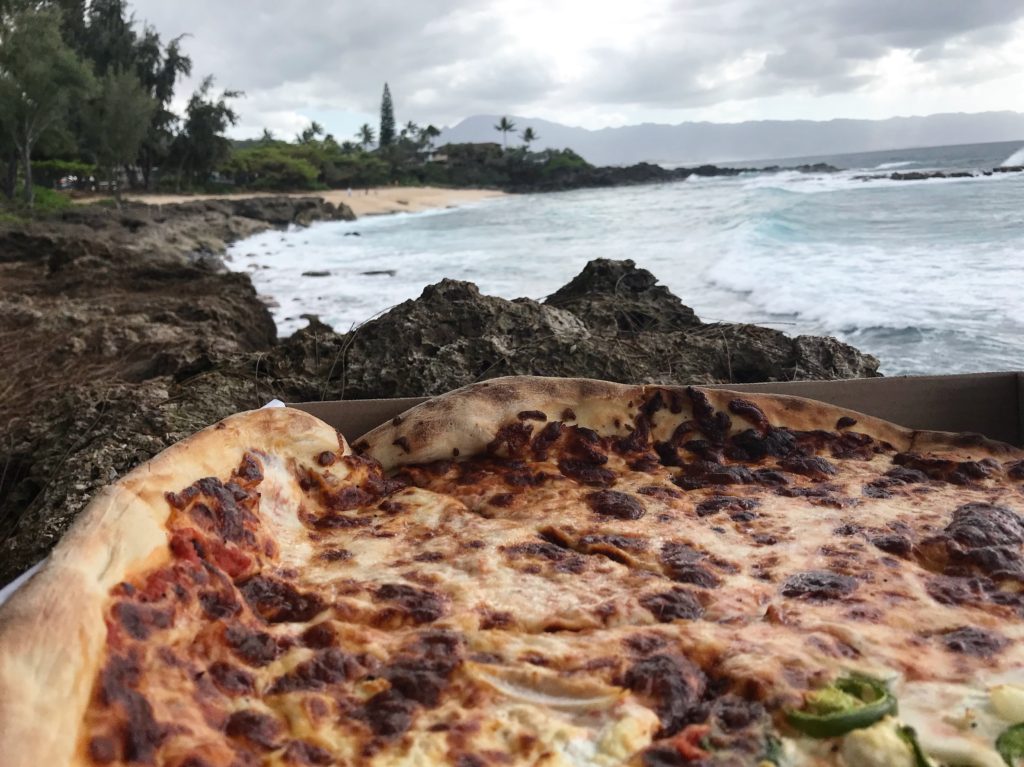 By far the best argument for ordering a pie from Impossibles Pizza is the view you get to enjoy it with. There are few pizzas I’ve eaten in a more scenic setting. That’s not to say that there aren’t other delicious eats along Kamehameha Highway — including the famous haupia cream pies from Ted’s Bakery and the best acai bowls I’ve ever had from a Brazilian truck called Crispy Grindz. But if it’s pizza you’re craving, why not give Impossibles Pizza a try? The views are lovely enough to compensate for any insufficiencies in the pizza. While that might not sound like a raving review, I can assure you won’t be disappointed. You’re in Hawaii. As they say: Good Vibes Only (Decent Pizza Is Just A Bonus).

2020-04-02
I Dream Of Pizza
Previous: Pizza In Portugal’s Wine Country At Pizzeria Limonete
Next: A New Meaning For “Bar Pizza” 2 Hours North Of NYC