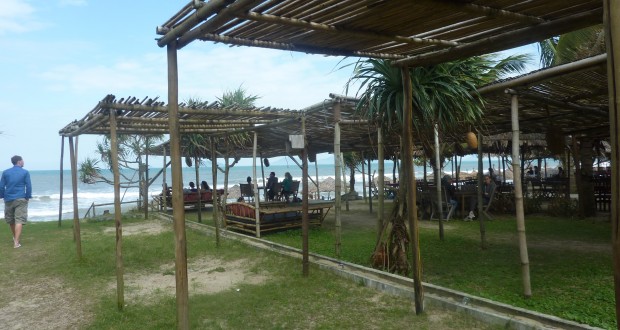 Posted by: I Dream Of Pizza in International, Reviews, Vietnam April 1, 2013

As you might recall, I recently returned from a three week trip to Eastern Asia, during which I made it my mission to try a different pizza place in each of the three countries I visited: Thailand, Vietnam, and Cambodia. The first place I visited was Girasole (in Chiang Mai, Thailand) which I enjoyed, but …

Summary : The scenic setting cannot be beat, so it's hard not to enjoy the pizza here. The white pies were better than the red.

As you might recall, I recently returned from a three week trip to Eastern Asia, during which I made it my mission to try a different pizza place in each of the three countries I visited: Thailand, Vietnam, and Cambodia. The first place I visited was Girasole (in Chiang Mai, Thailand) which I enjoyed, but it would not compare to the experience I had in Hoi An, Vietnam on the eleventh day of my trip.

Hoi An is a quaint town of 120,000 inhabitants along the South Central Coast of Vietnam. It is recognized as a World Heritage Site by UNESCO and today it is perhaps most well known for producing incredibly cheap, high quality custom-made clothing. Although I spent many hours at the tailor, one of the highlights of my time there was a bike ride my friends and I took to check out a hidden pizza place along the beach. The heart of Hoi An is just a few square blocks and is easily navigated by foot. But I recommend renting a bike and riding 5 miles east (approximately 8 kilometers) to the beach along Cửa Đại Road.

Our final destination: Luna D’Autunno. If you know where you’re going, the restaurant is quite easy to find. And if you follow my directions, you’ll have no problem. First off, it’s important to realize that there doesn’t appear to be an address for the restaurant, as it’s essentially a hut on the beach, and Googling directions won’t get you anywhere either. The most reliable source of information was a Foursquare page which led me to a map with the GPS coordinates. 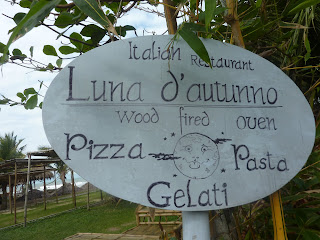 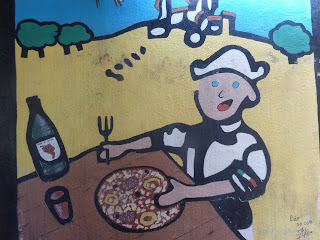 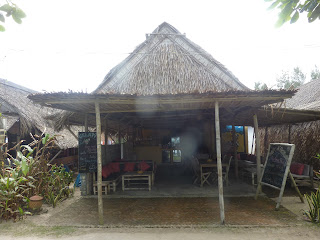 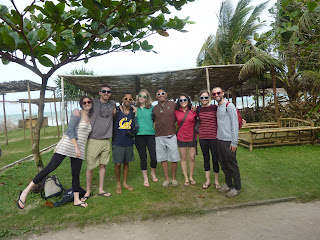 You don’t need a phone with Google Maps or GPS through. Simply ride your bike east along Tran Hung Dao, which turns into Cửa Đại Road for approximately 4.5 kilometers. As you approach the beach, you’ll go over a little bridge (it’s tiny, but it’s the only bridge you’ll encounter along your ride). When you get over the bridge, make a left on Lạc Long Quân and stay on that for approximately 3.2 kilometers until you reach the restaurant. Note that after about 2 kilometers on Lạc Long Quân the road splits, and you should bear right, going down a dirt pathway which appears to be a little off the beaten path, but is manageable even for a novice biker.

One final tip: Throughout your ride, you may encounter bike stations. These look like official stations where bikes are parked. People will try to flank you down and tell you that it’s illegal to ride your bike any further and that you must pay to park your bike at the station. This is a scam. Continue riding, no matter what anyone tells you. We rode our bikes right up to the restaurant and this is really the only feasible way to get there.

Follow these directions and you’ll find yourself in one of the most relaxing and scenic pizza places I have ever seen. Located on a secluded plot of land along the beach, my friends and I enjoyed 8 pies while overlooking the South China Sea. 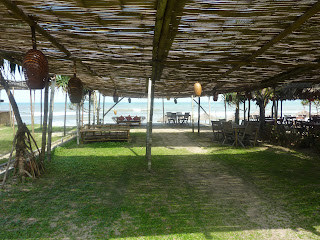 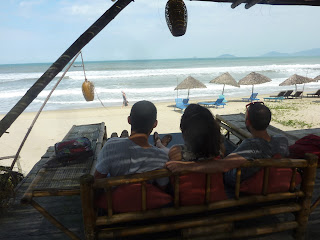 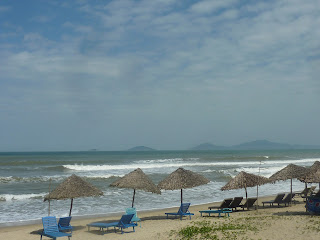 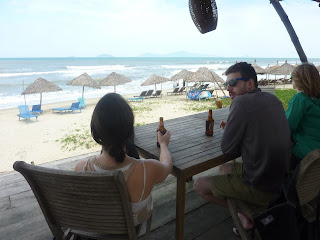 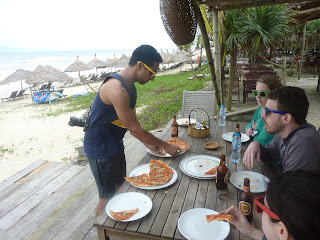 Upon arriving at Luna D’Autunno, the first thing I noticed was a sign that read: Foie Gras Party. I knew I was in the right place. They had a special pie on the menu that day featuring mushrooms and foie gras, which I was excited to try. I wouldn’t say it was necessarily a big hit, but I love foie gras and this was the first time I have ever gotten to try it on pizza. It was, in fact, the best foie gras pizza I’ve ever eaten! In seriousness, I don’t have much else to compare it too, but if they have this pie on the menu when you go, I’d highly recommend it. 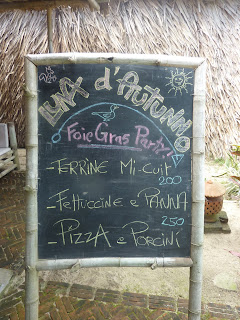 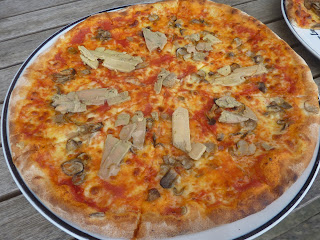 General consensus was that the best pie was the Pizza Raph which contained mozzarella, onion and egg (we got it without the bacon). It was creamy and as you sliced it, the egg yolk spread over the pie. The onions were grilled to perfection and this pie is still on my mind, even weeks after the fact. A close runner up was the Primavera pie which featured mozzarella, tomato, eggplant, zucchini, and mushrooms. There were only three “Pizza Bianche” pies on the menu (without sauce) and we got two of them which happened to be two of the best. My advice? Add a couple more sauceless pies to the menu, as this is where Luna D’Autunno really shines.
Pizza Raph
(mozzarella, onion and egg) 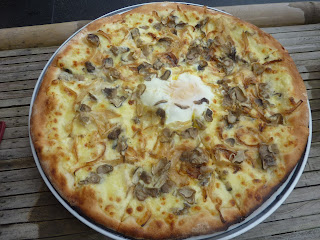 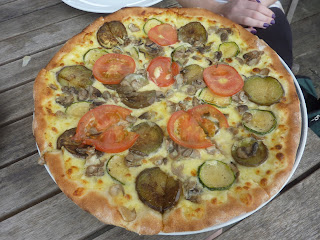 The rest of the menu contains 27 pies that feature sauce and none are overly adventurous sticking to toppings that it would be normal to find on a New York City pizza menu (except for the foie gras special). The were all decent — I think the spinach & ricotta pie and the quattro stagioni I could have done without. The four cheese pie would have been better without sauce, and I think a true four cheese pie shouldn’t have any — especially at a place which such great white pies.

In the end, however, this visit wasn’t so much about the pizza. It was about the atmosphere and ambiance at what was one of the most awesome pizza places I’ve ever been. Was my perception of the pizza enhanced by the environment I was in? Perhaps slightly. But there was nothing I would have rather been doing at that moment that enjoying a pie overlooking the waves. 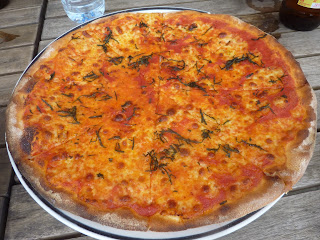 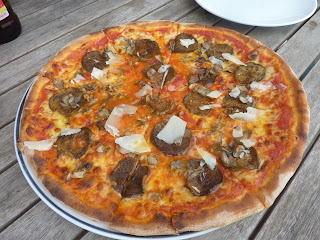 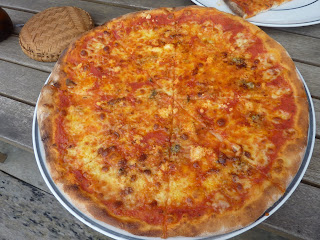 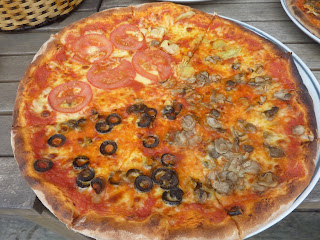 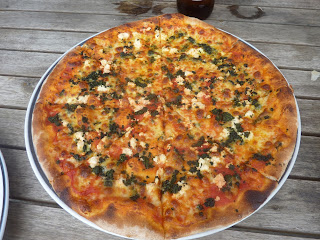 Tagged with: Foie Gras Pizza Hoi An Pizza On The Beach Vietnam