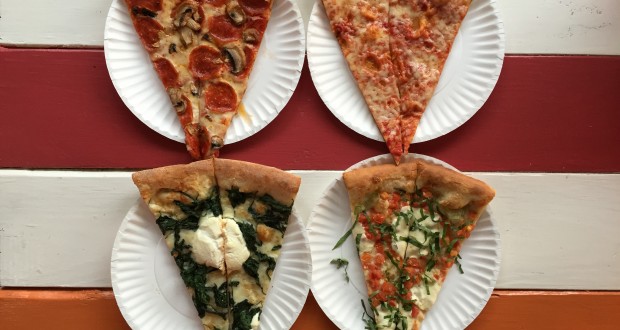 Austin has a lot of good food — scratch that — GREAT food. I’ve made four trips there in recent years and each has included a stop for pizza. In 2012, I went to The Backspace which is located right off 6th Street and was pretty tasty, though not groundbreaking. In 2013, I went to …

Summary : Home Slice has cool decor and fun vibes, but its pizza is pretty average, especially when compared to a New York slice spot.

Austin has a lot of good food — scratch that — GREAT food. I’ve made four trips there in recent years and each has included a stop for pizza. In 2012, I went to The Backspace which is located right off 6th Street and was pretty tasty, though not groundbreaking. In 2013, I went to Via 313 – a Detroit style pizza truck — which I really love and still frequently crave. And in early 2015, I went to Bufalina which was solid, although I didn’t review it. Even though I hate to sacrifice a meal of brisket for pizza in Austin, my prior experiences suggested that I wouldn’t regret it this time around.

My place of choice: Home Slice (1415 South Congress Avenue). The pizza spot is located in a bustling area just south of downtown Austin filled with shops, restaurants, food trucks and markets. It’s a hopping strip! And in the heart of it is a landmark pizza place which you can’t miss. Its old school, retro signage stands out even during the day time. And it’s not uncommon to see crowds forming out front.

If only their pizza was better… 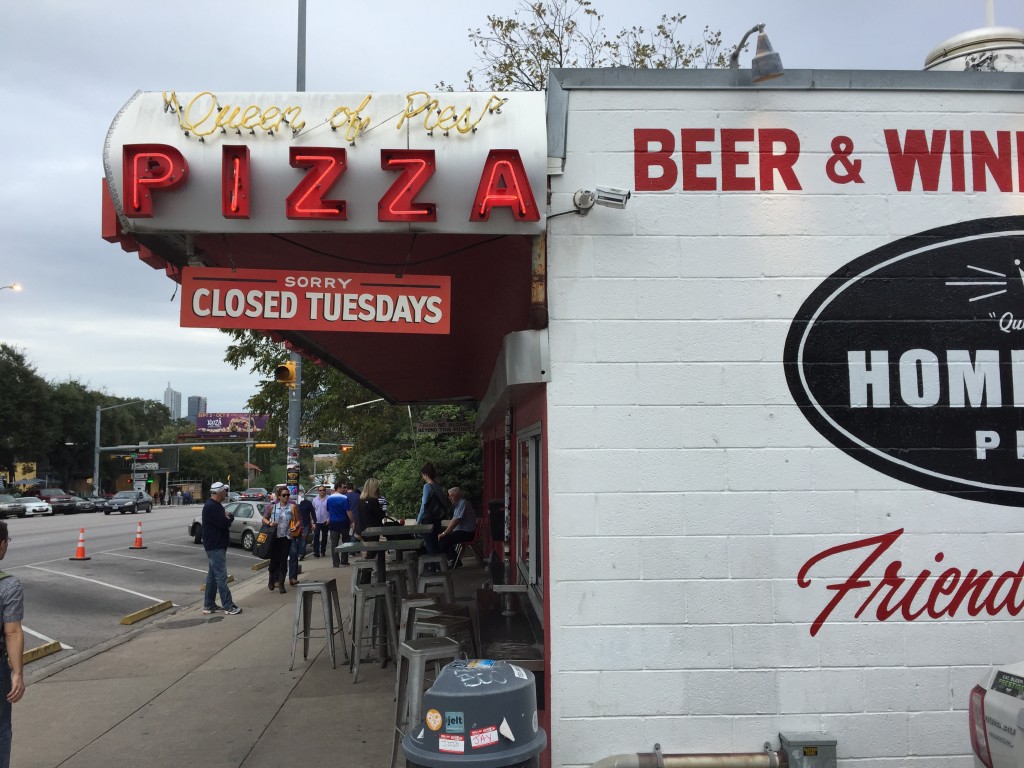 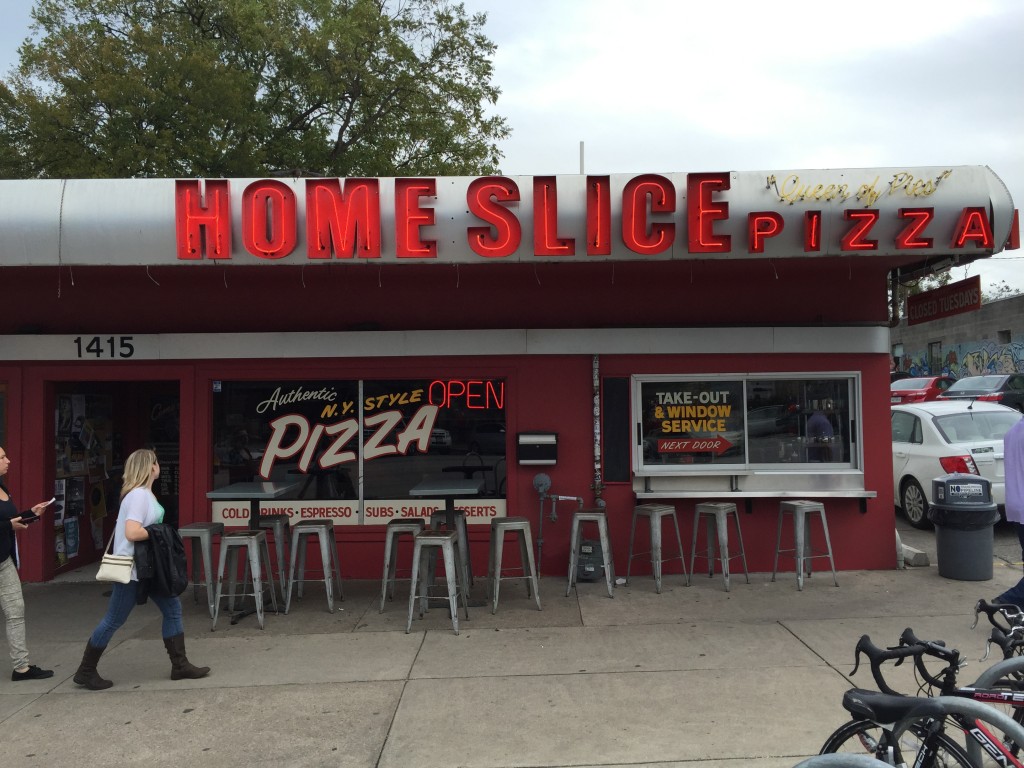 Let me say this. Home Slice is a cool place. All other pizza places are probably envious that Home Slice is too popular to hang out with them. There is a sweet backyard which has picnic tables and ping pong tables. And inside there are a couple of rooms and a bar where diners can sit. There were families, couples, and solo patrons there on a Sunday afternoon. Even past prime lunchtime — at 3PM — the place was packed. 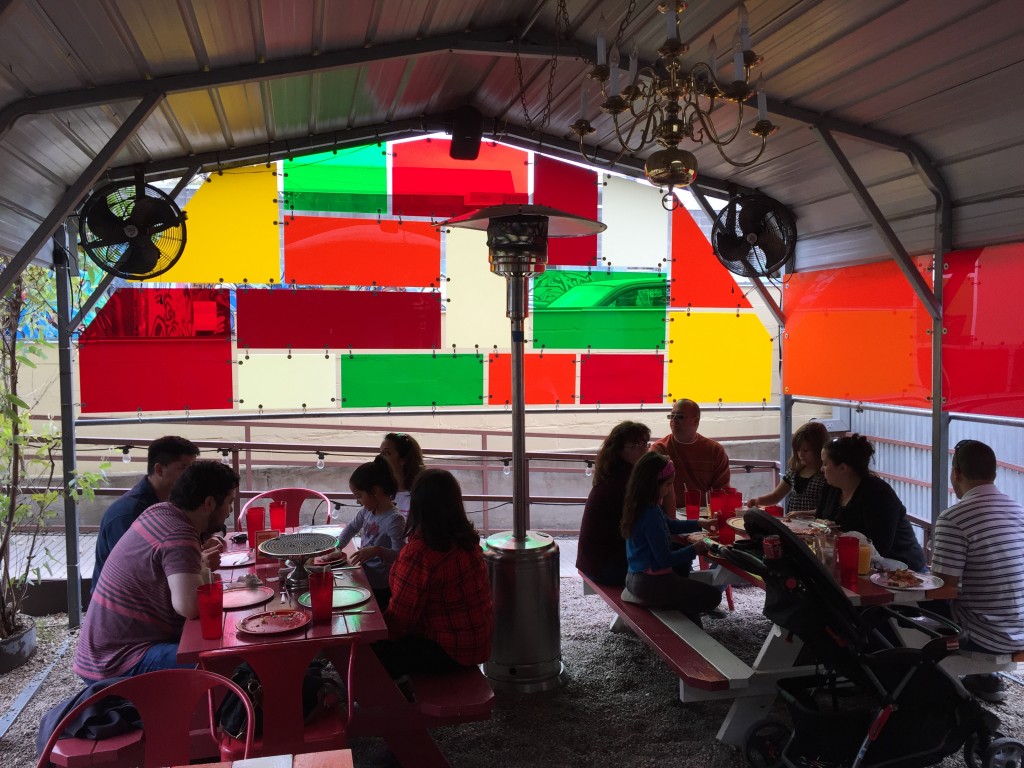 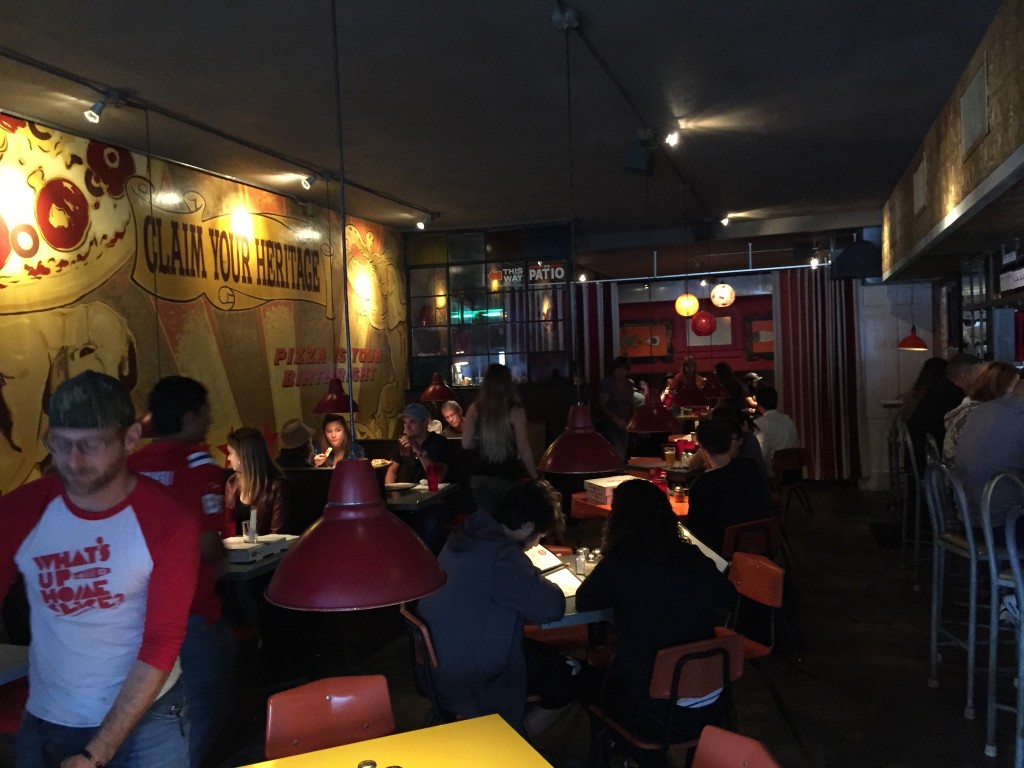 There was clearly a lot of thought put into the theme and design. It’s suppose to mimic an old school New York pizza joint (although it’s hard to believe that any New York pizza place every looked like this). Maybe, more accurately, it’s how a bunch of hipsters in Austin would re-imagine a New York pizza place. The net on the ping pong tables read “In Crust We Trust” and the waiters wear baseball tees that read “What’s Up Home Slice.”

Even the parking signs are… you know what… fuggedaboutit. 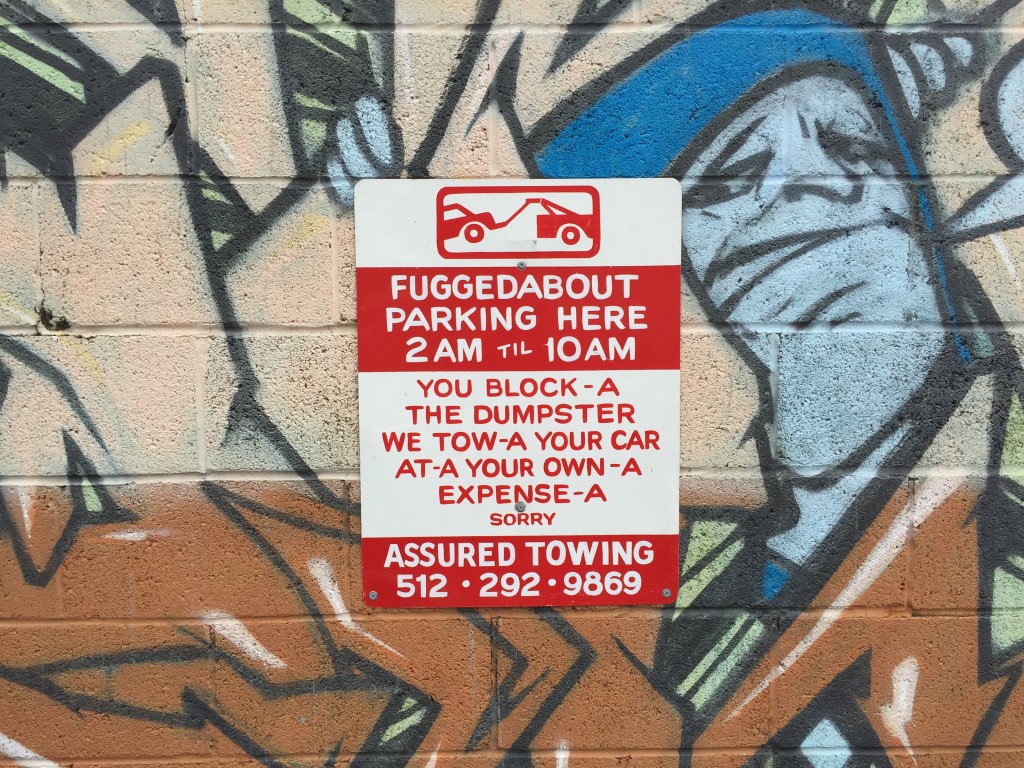 Truth be told, I liked everything about Home Slice except for the pizza. It’s not that it was bad. It just wasn’t anything special. The pizza tasted like a very average New York corner slice spot. And maybe that’s what Home Slice is going for. I just wish the execution was better. You walk in and you have such high expectations. And the pizza just doesn’t live up to the space and vibe you get.

There are seven “Tried and True” pies on the menu: margherita; white pie with spinach; eggplant; spinach, roasted red pepper, green olives and onion; pepperoni and mushroom; sausage, ricotta, and roasted red pepper; and a white clam pie. Each comes as a medium ($18.00) or a large ($21.00) except for the clam pie which is $21.00/$25.00. None of the pies are particularly creative and I actually like their limited selection. That typically enables a pizzeria to focus on what they do best.

You can also build your own pie on a red or white base. And add some 25 toppings to it.

Home Slice also offers four pies by the slice (which should be a given since “slice” is in its name): cheese, pepperoni, margherita, and a rotating slice from their “specialty” menu which happened to be the white pie with spinach when I was there. In a perfect world, it would be great to go there with a large group and order full-sized fresh pies. But since I was only with one friend, we opted to try all four slices.

The margherita wasn’t what I was expecting. It came out with diced tomatoes and chopped basil. Very average. The same can be said for the rest of the slices. The mushroom and pepperoni was probably my favorite, but more by default than for the fact that it was noteworthy. The slices range from $3.50 to $4.00. So at least they accurately represented New York on that front! 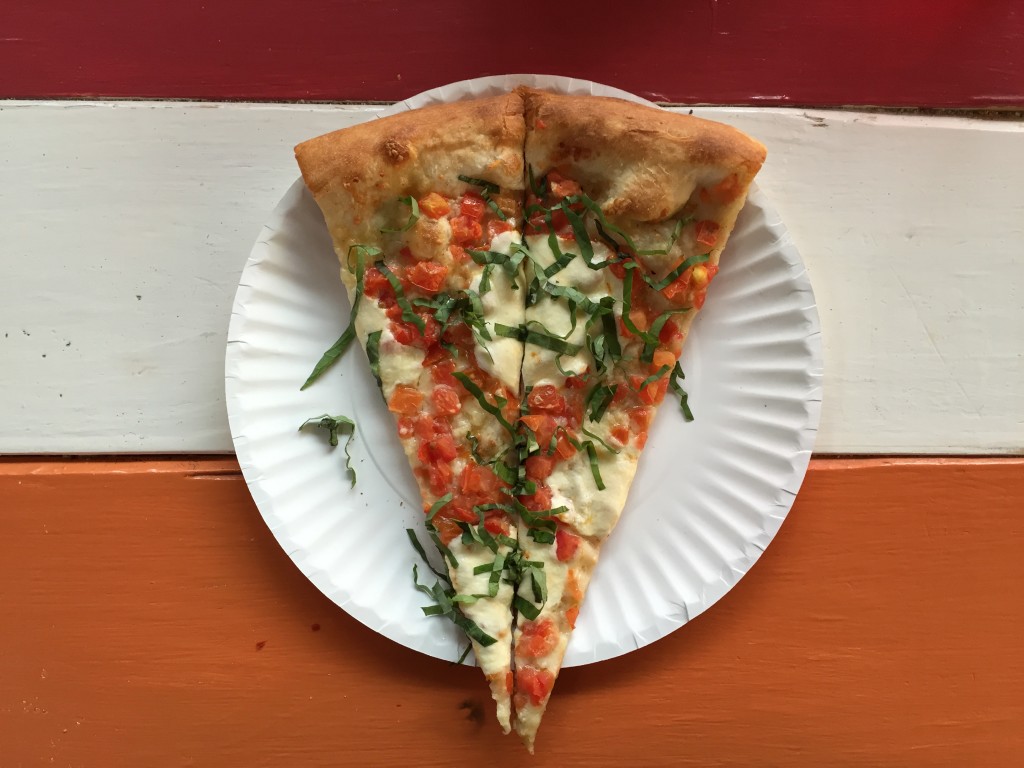 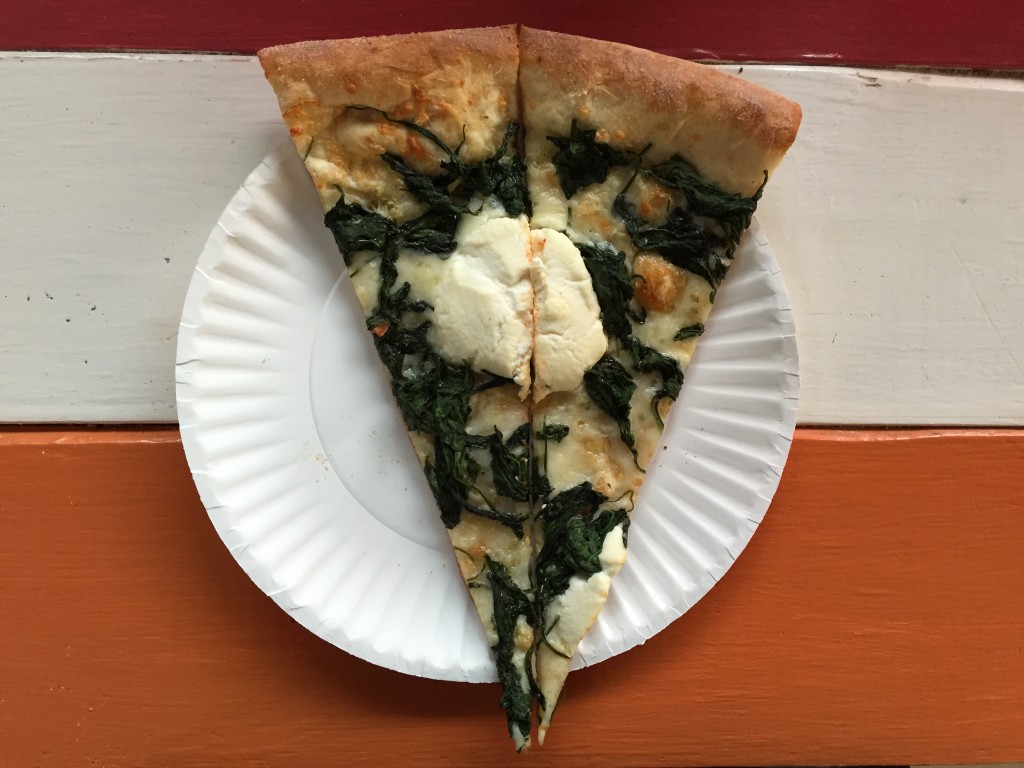 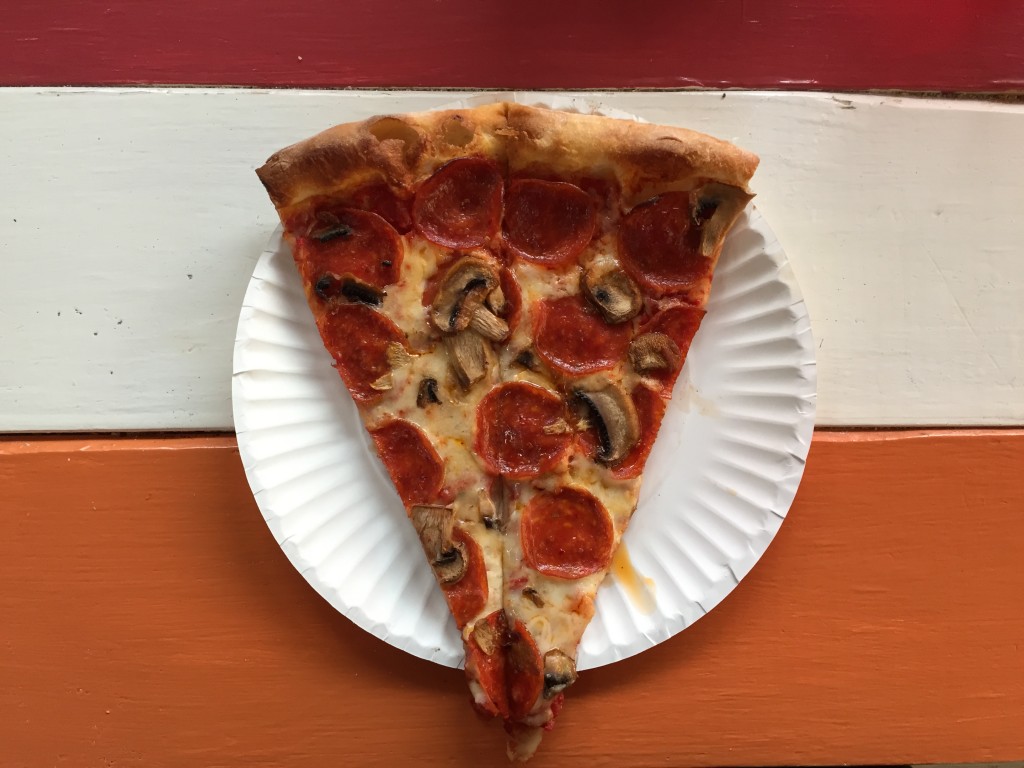 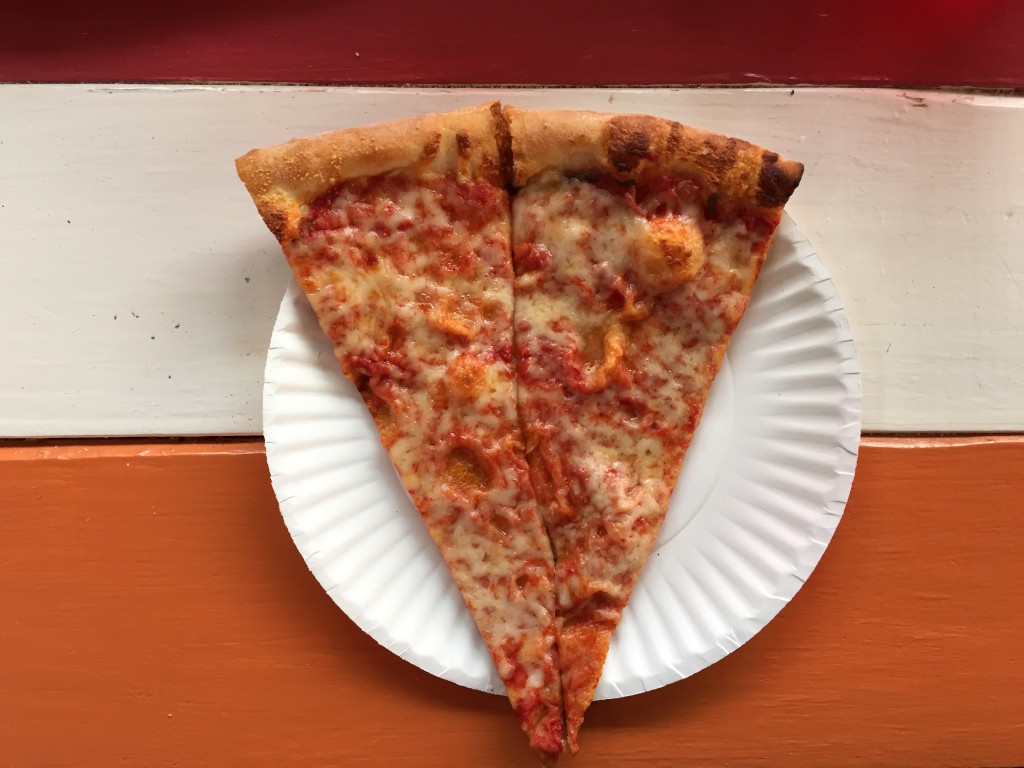 We also ordered garlic knots. It’s hard to make garlic knots taste bad. And these ones were decent. Of note: they are massive. Certainly not a “must order” item, but they will fill you up. 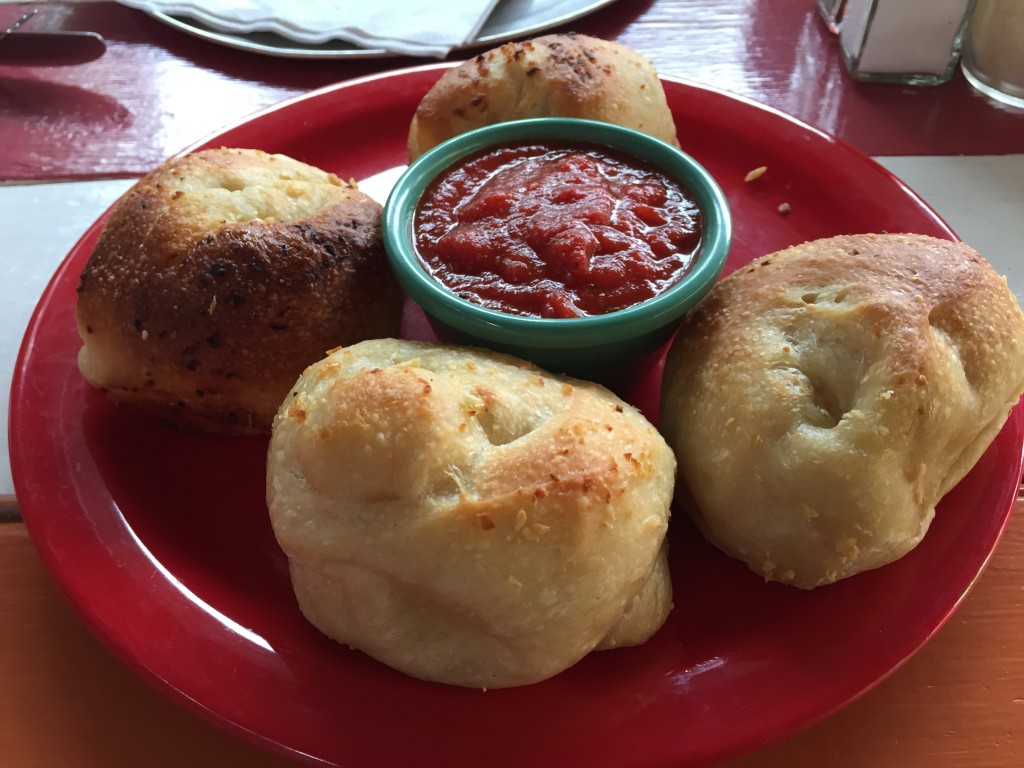 And finally — next to Home Slice is a take out spot called More Home Slice. So if you want a slice and don’t want to dine in, that’s always an option. If I ever go back, this is probably the way to go. 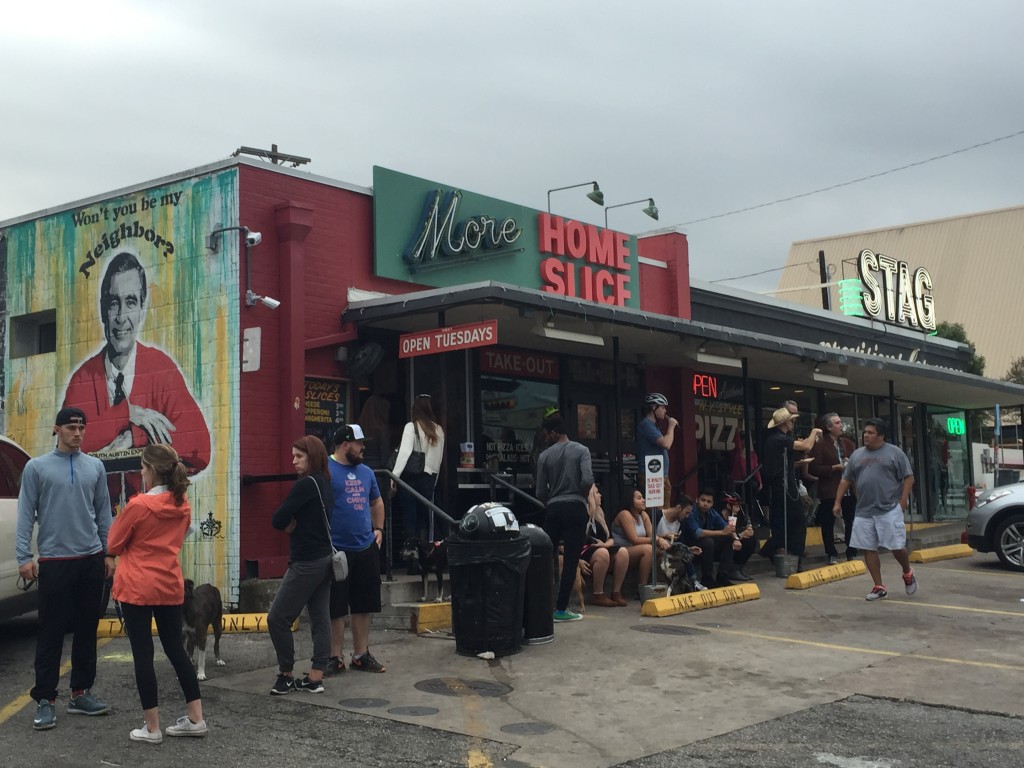 So where does that leave us? Home Slice is a cool spot. They have a fun vibe going on and its places like this which make Austin such a fun and alluring city. The food itself is very average, especially when compared to what you might find in New York. I don’t compare every pizza place around the country to New York. But Home Slice’s motto is “Authentic New York Style Pizza” so in this case I feel the comparison is warranted. That being said, I eat average New York slices from time to time. And if I lived in Austin, I could definitely see a place like Home Slice being my go-to spot for a late night slice (More Home Slice is open until 3AM on Friday and Saturday). Wash it down with a Shiner or Lonestar and you’ll be good to go!

Previous: Table On Ten’s Weekend Pizza Nights Are Awesome
Next: The Parlor: The Best Pizza Place You’ve Never Been