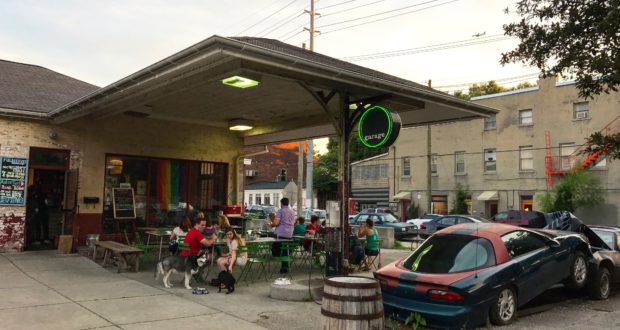 As I mentioned in my previous review, I recently returned from a roadtrip through the South and Midwest and made sure to try pizza in each of the four states I visited: Tennessee, Kentucky, Illinois, and Wisconsin. After a very average pizza outing in Nashville at Five Points Pizza I was hoping to have better luck in …

Summary : Reasonably priced pies served in a former gas station. The toppings are great, but the crust left much to be desired.

As I mentioned in my previous review, I recently returned from a roadtrip through the South and Midwest and made sure to try pizza in each of the four states I visited: Tennessee, Kentucky, Illinois, and Wisconsin. After a very average pizza outing in Nashville at Five Points Pizza I was hoping to have better luck in Louisville, Kentucky — home to the Louisville Slugger Museum & Factory, Churchill Downs Racetrack, and more bourbon that you could possibly consume in a lifetime.

On my final night in Louisville, I visited Garage Bar (700 East Market Street) which was built inside of an old gas station. The best part is that the restaurant’s outdoor seating area is located underneath the original gas station roof. It’s a pretty cool atmosphere to enjoy some pies. Another interesting tidbit which I didn’t realize until I arrived in Louisville is that the city is actually situated in the eastern time zone. That means the sun sets about 45 minutes later than on the east coast. So when I was there at the end of June around the summer solstice, it was still light out at 9:30PM.

Where else in our great nation can you eat pizza at a retrofitted gas station in daylight at 9:30PM? 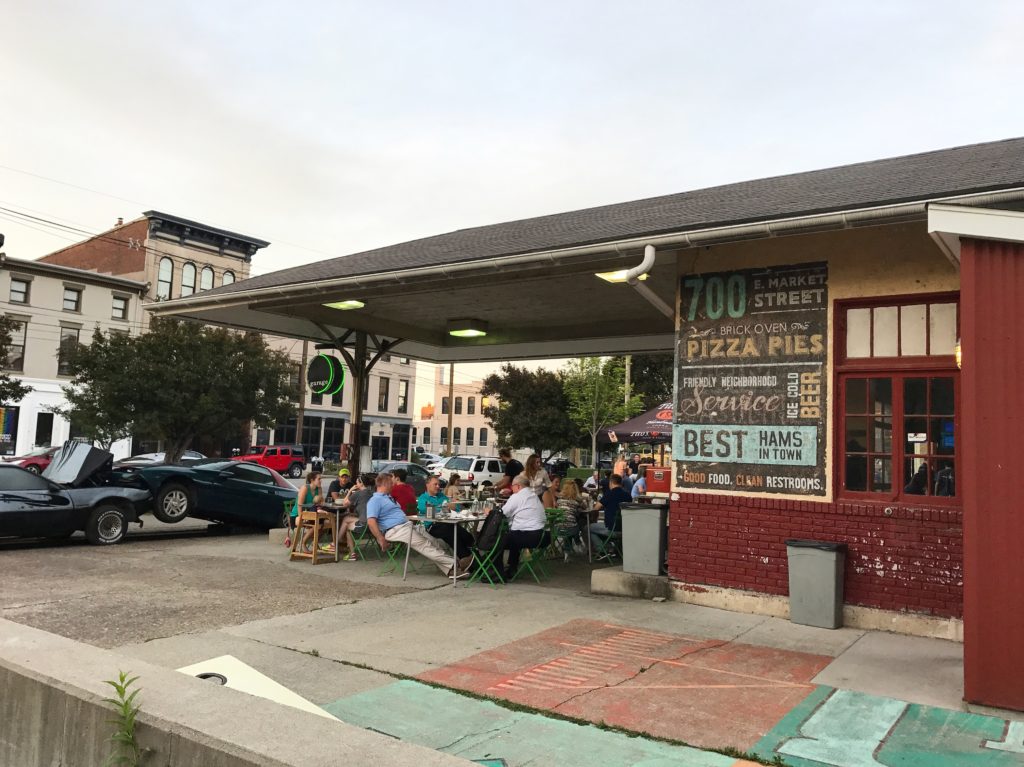 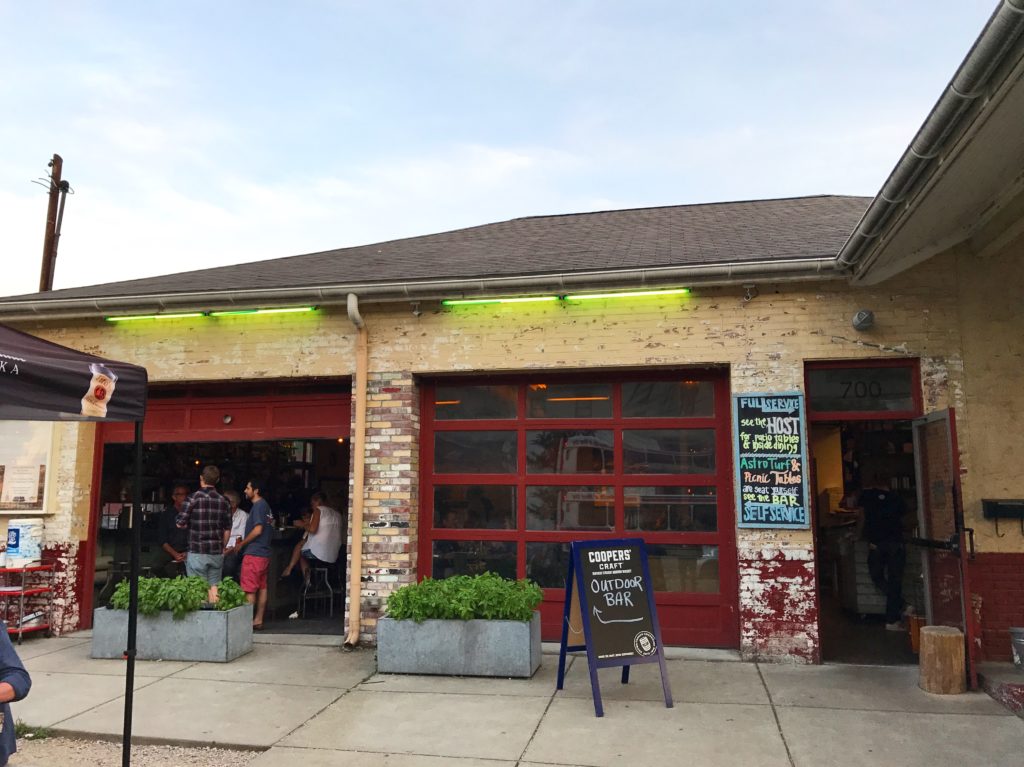 Around the side of the gas station they have an outdoor bar which has some steps covered in artificial grass and a couple of ping pong tables. It’s hipster-central, and after dark the place really came alive with the “younger” crowd (I’m 33 now, so I can say that, right?). 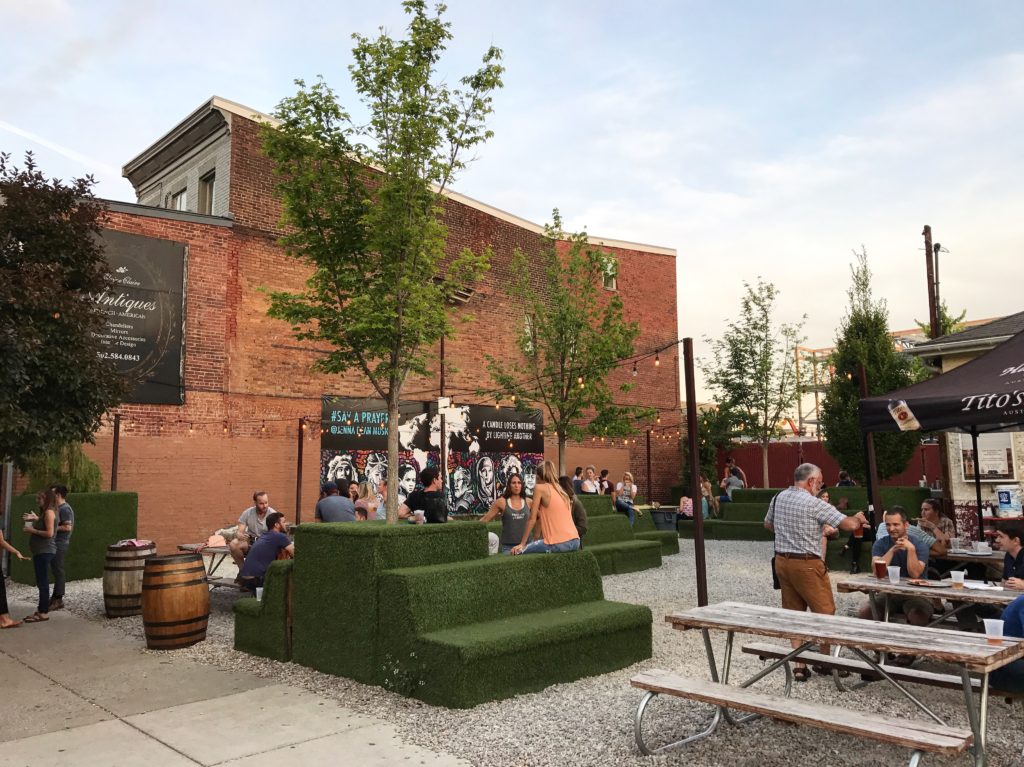 Inside of the old station there is also seating, which was full the night I was there. 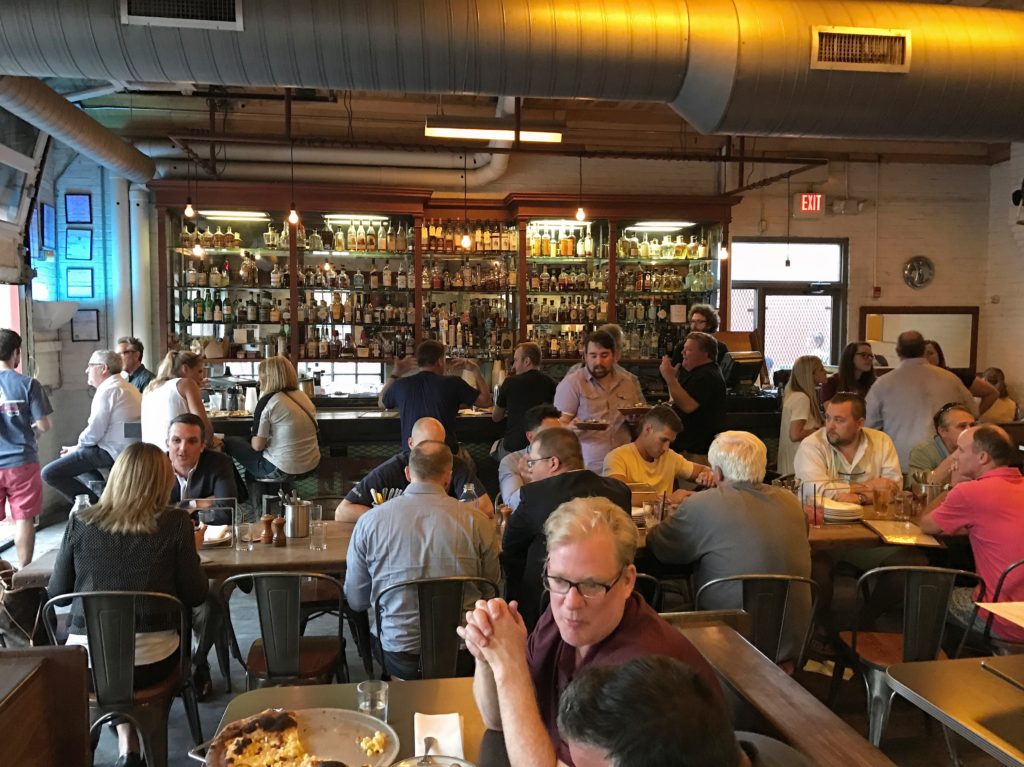 Now that I’ve set the scene, let’s get to the pizza. Unfortunately, my obsession with the building and atmosphere didn’t quite transfer to the pizza. There were eight pies on the menu the night I visited, each priced between $11-$17. Four were vegetarian and four contained meat, but even the meat pies featured particularly unique vegetables. For example, a “Sweet Corn” pie contained broadbent bacon, cream, bourbon pickled chilies, garlic puree & fior di latte. And a “Ramp and Pancetta” pie was topped with milled tomato, local pancetta, ramps, mint, fior di latte & Calabrian chilies.

The ramp pie sounded good, but I knew ramps were already out of season. I asked the waiter about this and he told me that the ramps were pickled, which would have been a nice detail to add to the description of the pizza since pickled ramps are a completely different taste and texture than fresh ramps. Regardless, my wife and I decided to order this pie. She doesn’t eat pancetta and the waiter recommended substituting kale for the pancetta. What we were ultimately served was essentially a kale pie. The kale was really tasty, but you couldn’t taste — or even see — the pickled ramps. Takeaway: if there is a pie with kale on the menu, go for it.

We also ordered a margherita pie. The toppings on it (milled tomato, fior di latte & garden basil) were tasty, as well. 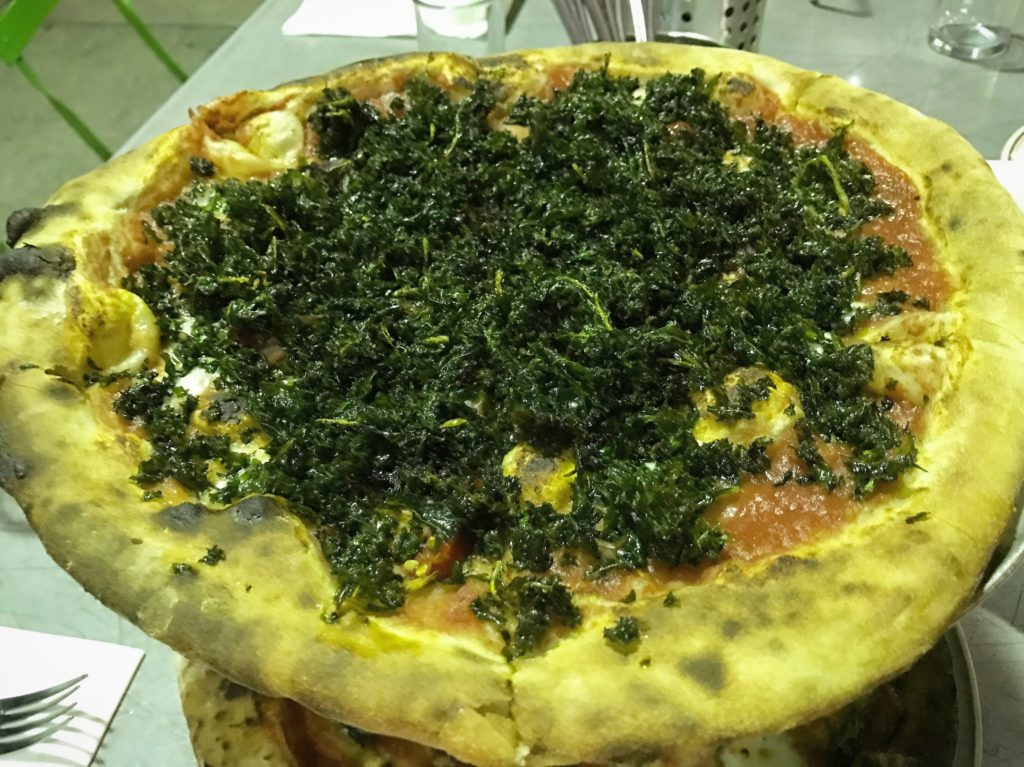 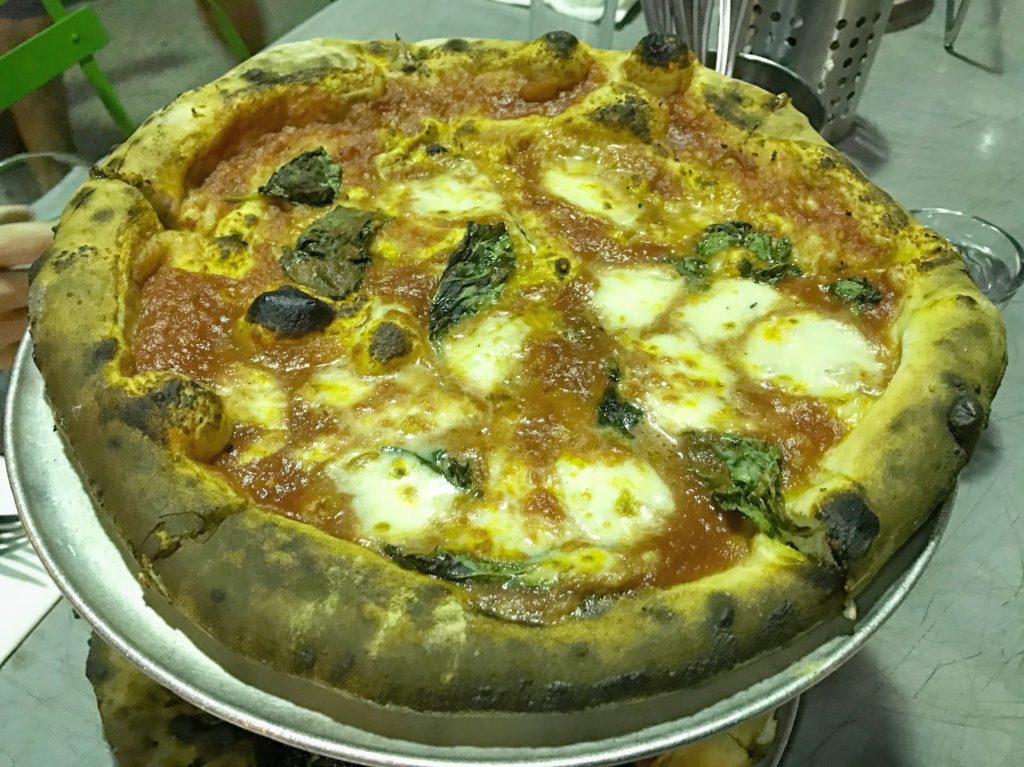 While the toppings we had on both pies were great, the same cannot be said for the crust. Parts of the crusts on both pies were burnt. And when I picked up the slices I noticed something I’d never before been served on the bottom of a pie: raw flour. I’m not sure how or why this happened, but the bottom of our pies had a generous coating of raw flour. We tried our best to dust it off, but in many of the bites I had I could actually taste raw flour. Pretty gross when you think about it. I always say that the crust is the most important part of the pie, and Garage Bar didn’t fare well in terms of their crust. 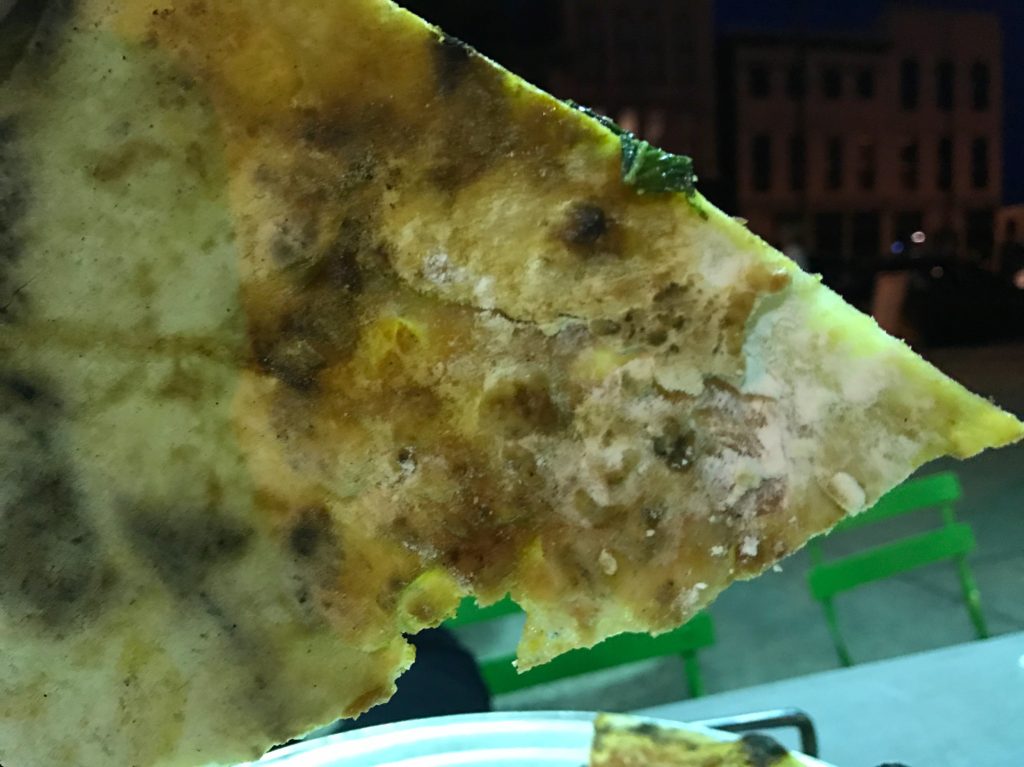 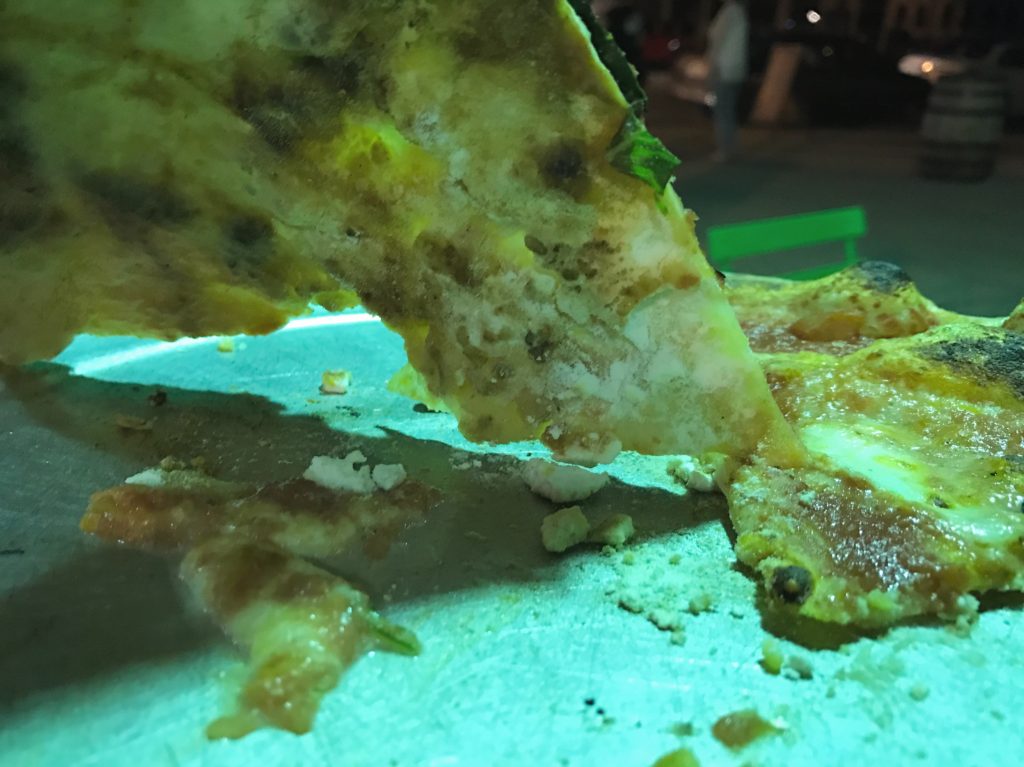 So where does that leave us? Cool atmosphere, fun topping combinations which actually tasted quite good. But crust that I wouldn’t wish on my worst enemy. I’ll give Garage Bar the benefit of the doubt here. Maybe it was an off night.

If you’re in Louisville and the weather is warm, I’d still recommend swinging by for a drink and a pie. Worst case scenario: you’re eating not so great pizza in an awesome retrofitted gas station. And if you order a few beers to go along with it, I think the experience will still be worth your while.

Previous: In Chicago, Deep Dish By The Slice At Art Of Pizza
Next: Mama’s Too: The Best Pizza Place In Manhattan