Toronto’s Pizza Libretto: Not Worth The Wait

Posted by: I Dream Of Pizza in Canada, International, Reviews September 14, 2009

I spent Labor Day weekend in Toronto and was intent on hitting up both of the city’s most talked about pizza places — Pizza Libretto and Terroni. The latter has been around for a decade while Libretto is the Jordan Knight of the two (the new kid on the block… c’mon follow me here, people).

Our first stop was Libretto and even though I’d been tipped off about the long wait by Yelpers, I figured it couldn’t be that bad for a two top, even though it was a Saturday night on a holiday weekend. We arrived around 8:30PM and were told the wait would be about 90 minutes. Although the hostess was taking cell phone numbers, since we were phone-less we were told to come back around 10:00PM. After filling up on beer and fries across the street we were seated at precisely that time.

I’ll be frank — pizza was not the restaurant’s strength. There were a lot of nice things about our experience… it’s just that food wasn’t one of them. So I’ll begin with what I liked:

Number 1: Prix Fix. The have a $25 prix fix menu. This is a great value. Because we’d filled up across the street, we weren’t hungry enough to take advantage of this deal, but they offer you (a) mixed bruschetta (the chef’s choice of seasonally available ingredients) which looked delicious, (b) a choice of three salads, (c) one of their 12 pizzas, and (d) a dessert. Considering a pizza alone is $10 – $18, it really makes sense to take advantage of this special. In fact, the four courses ordered separately could run you as much as $40. So if you come here, order the prix fix. I’d like to see more pizza places in New York have options like this. 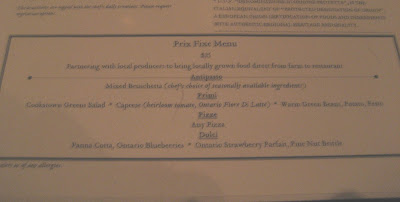 Number 2: Quattro Stagione. Although not explained on the menu, the restaurant serves a pie called Quattro Stagione (as did Terroni) which has a number of toppings: Tomato, Ontario Fiore Di Latte Mozzarella, Bella Olives, Mushroom, and Artichoke. The interesting this about this pie is that each topping is only on a quarter of the pie. This works out well if certain people only like certain toppings. I, for example, don’t like olives so my friend Becky was able to take care of that quarter of the pie. In the States, I often find myself ordering pies that are half mushroom and half onion, partially because I don’t think restaurants would even make a pie with four different toppings on four quarters, but the Quattro Stagione pie solves that problem. Even so, you can see how uneven the toppings on our pie are in the photo. 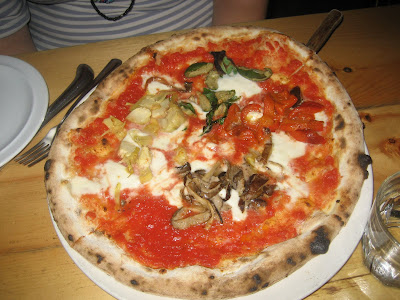 Number 3: Decorations. I loved the restaurant’s decorations. The place is strategically laid out in a way that made pefect sense. Room for a couple of small parties up front, followed by a bar and some tables, and finally in the back — a big open space with group seating. The decorations were homey (picture frames, etc) and the lighting was sophisticated. 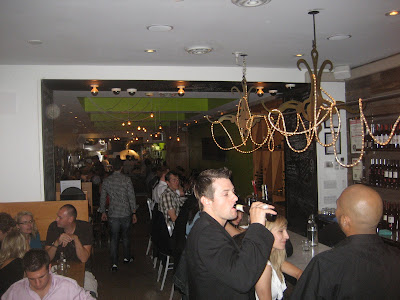 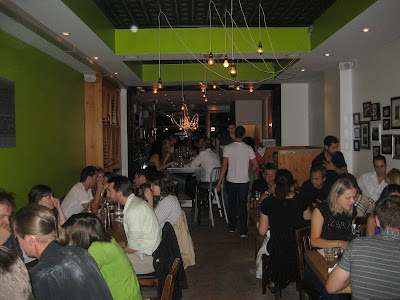 So now for the pizza. As I mentioned, we order one Quattro Stagione and a Margherita D.O.P pie. Both were average. Definitely not worth the wait. The pies did come out within 5 minutes of ordering them (too soon, maybe?) and they were oddly flimsy, so much so that it was impossible to eat it without a knife and fork. I kept on trying to fold my slice in order to eat it, but it kept falling apart. It would definitely help if the crust was cooked better. I don’t like my crust burnt by any means, but a little char would help the pizza stay together. The toppings were pretty bland as well. The sauce and cheese were standard and with an inconsistent base, there’s not much to say for the rest of the pie.

I can absolutely see why people wait hours to dine here. It’s cheap. It’s hip. And it’s a fun place to go with a group of friends. But when it comes to the actual pizza, I’d have to give this place a thumbs down. 2009-09-14
I Dream Of Pizza
Previous: Fall Pizza Preview
Next: Pizza Is Only Part Of What Makes A Meal At Toronto’s Terroni So Great