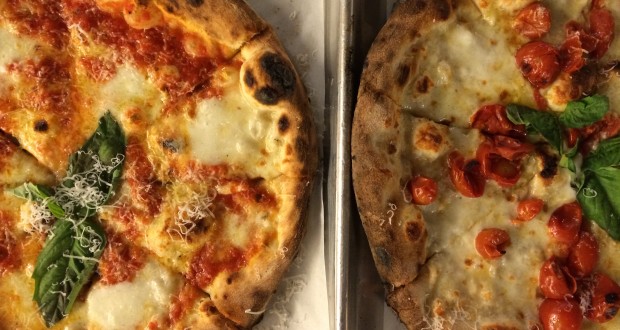 I recently made my first ever visit to Nashville. And although I made sure to hit up all of the area institutions (Pancake Pantry, Loveless Cafe) I also had to grab some pizza while in town. The destination? DeSano Pizza Bakery (115 16th Avenue South). I hadn’t heard too much about DeSano Pizza Bakery, although it …

Summary : This enormous Nashville pizzeria churns out good pies -- but it also unique in its size, decorations and the atmosphere it creates. If a barbecue joint morphed with a beer hall and started serving pizza, this is what you'd get.

I recently made my first ever visit to Nashville. And although I made sure to hit up all of the area institutions (Pancake Pantry, Loveless Cafe) I also had to grab some pizza while in town. The destination? DeSano Pizza Bakery (115 16th Avenue South). I hadn’t heard too much about DeSano Pizza Bakery, although it was on Eater’s list of 18 Essential Nashville Restaurant which is generally a good sign. What I found when I arrived was an incredibly cool, pizza-centric warehouse with awesome pizza inspired decorations throughout the facility. Although it was relativity empty when I was there on a Monday afternoon (Labor Day), I could envision this place being packed at prime hours. No wonder they have three ovens (three!) and tables that can seat a couple hundred people. It reminded of the pizza equivalent of a barbecue joint / beer hall. 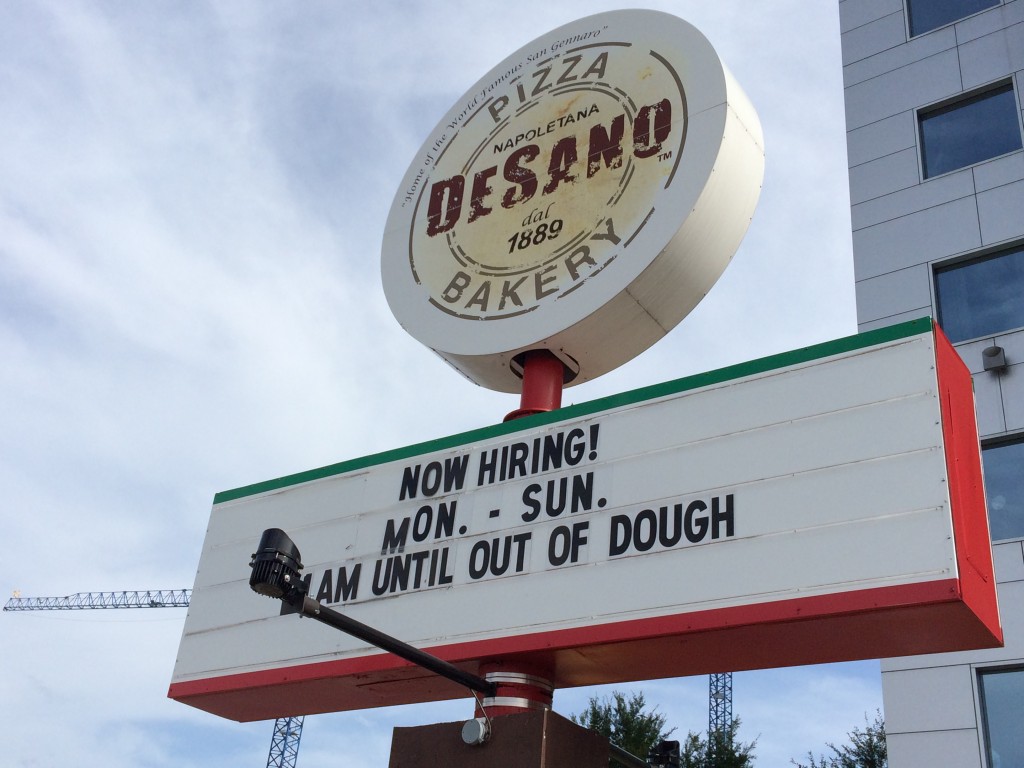 We’ll get to the pizza in a moment, but the design of DeSano’s was so cool, that it’s necessary to share some photos of what makes this place so special. There are two doors that you can enter through. One is for takeout and the other is to the main attraction — what they refer to as the “Bakery & Market.” 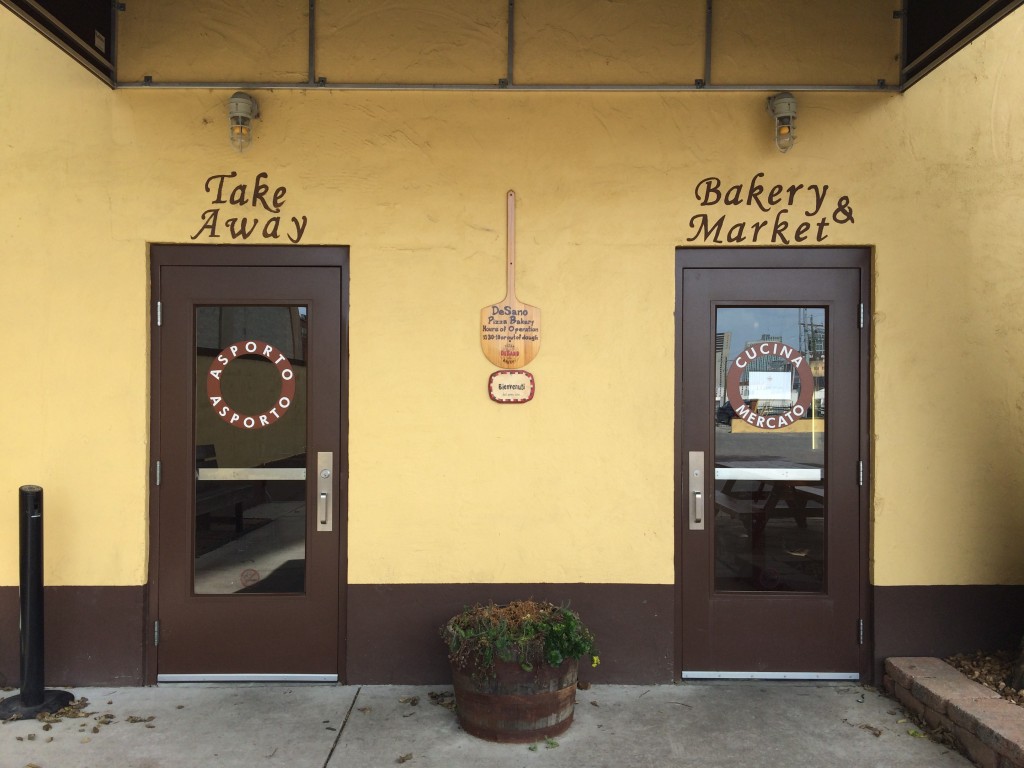 The first room you enter is where you place your order (or pick up your order if you’re taking out). Although they sell beer and wine they are also BYOB which is incredibly cool. You could sit there all day, drink beer, eat pizza and watch the Titans on TV. There were 11 pizzas on the menu (5 traditional pies and 6 special pies). A small, personal pie will run you an average of $13 while a larger pie costs about $21. My friend and I ordered a small Margherita D.O.P. (buffalo mozzarella, San Marzano tomatoes, basil, garlic) and a small Pomodorini (Vesuvian cherry tomatoes, buffalo mozzarella, garlic and basil). If you can’t tell by the ingreidnets, they are trying to be very Italian. Their website even has a “.it” domain! 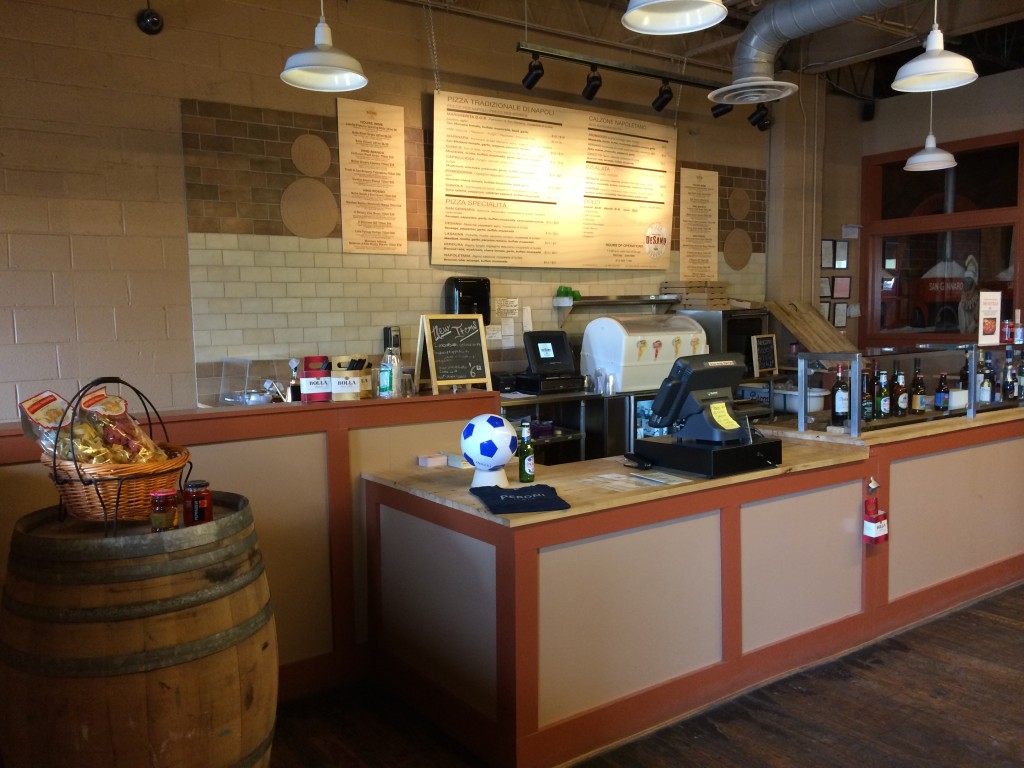 After placing your order, you are given a number and then you can proceed to a big pizza hall. I’ve never used that terminology on this blog before, but the room really reminded me of a beer hall. Except at a pizza place. It was decorated with pizza peels, ingredients on display, and the requisite Italian flag. 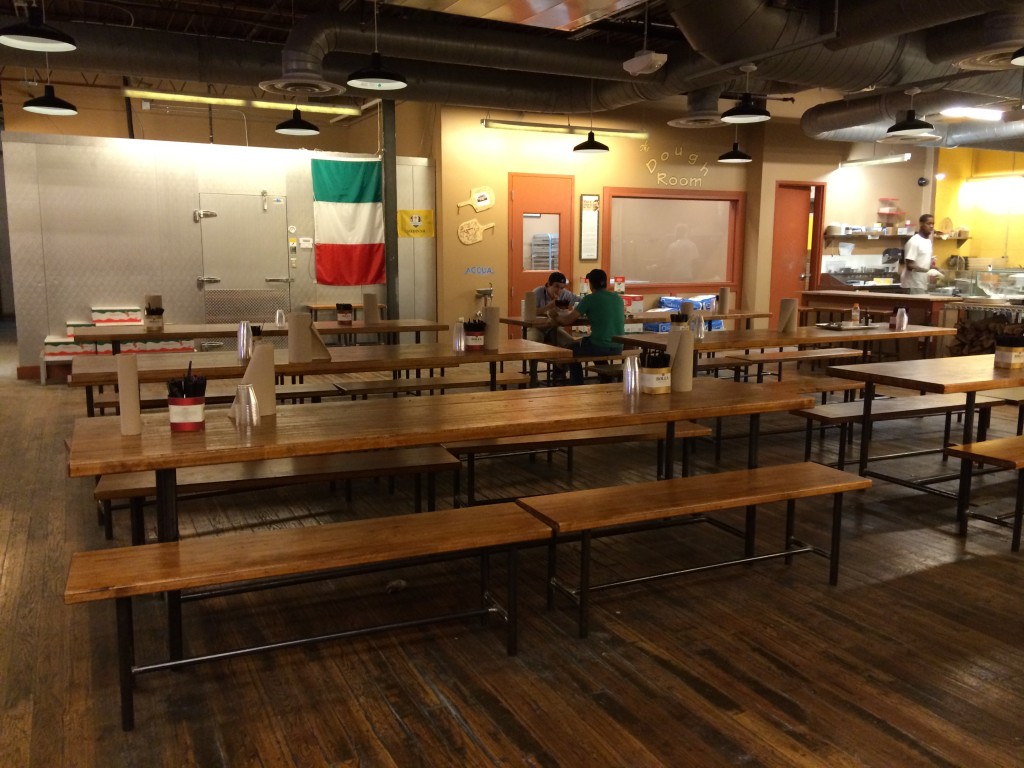 One of the coolest parts about the venue, which I mentioned before, is that they have three pizza ovens! Only one was in use when I was there, since it wasn’t crowded. But in order to feed a crowd of a couple hundred people — at capacity – it makes sense that they would need a bunch of ovens. Assuming a pie takes two minutes to cook, and each oven can hold three pies at a time… that would mean DeSano’s can crank out a pie every 13 seconds or so. That’s 270 pies an hour if they’re efficient. Just some back-of-the-envelope calculations for you! 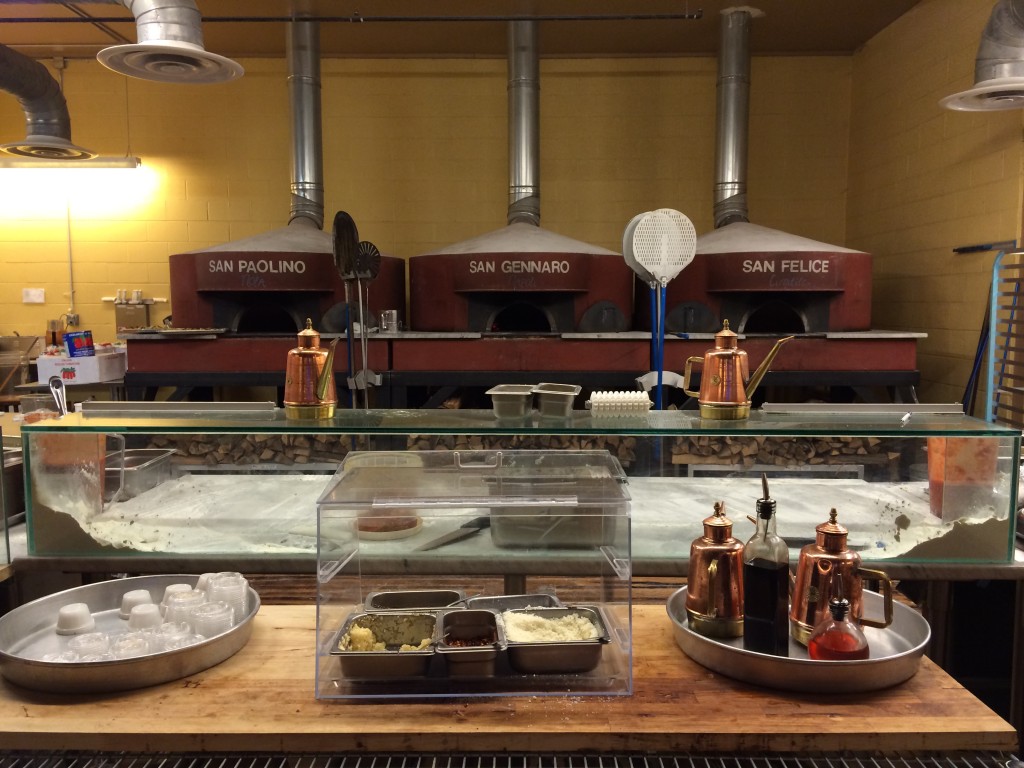 While you wait for your pizza, you can check out some “attractions” around the pizzeria including a glass windowed room where they make their dough. It’s full transparency here, folks! Dough wasn’t being made when I was there, but I imagine it’s pretty fun to watch — something you wouldn’t see at a typical pizza place. Even as an adult I think this is super cool… imagine how much kids would enjoy this! Something to keep you occupied during the wait. 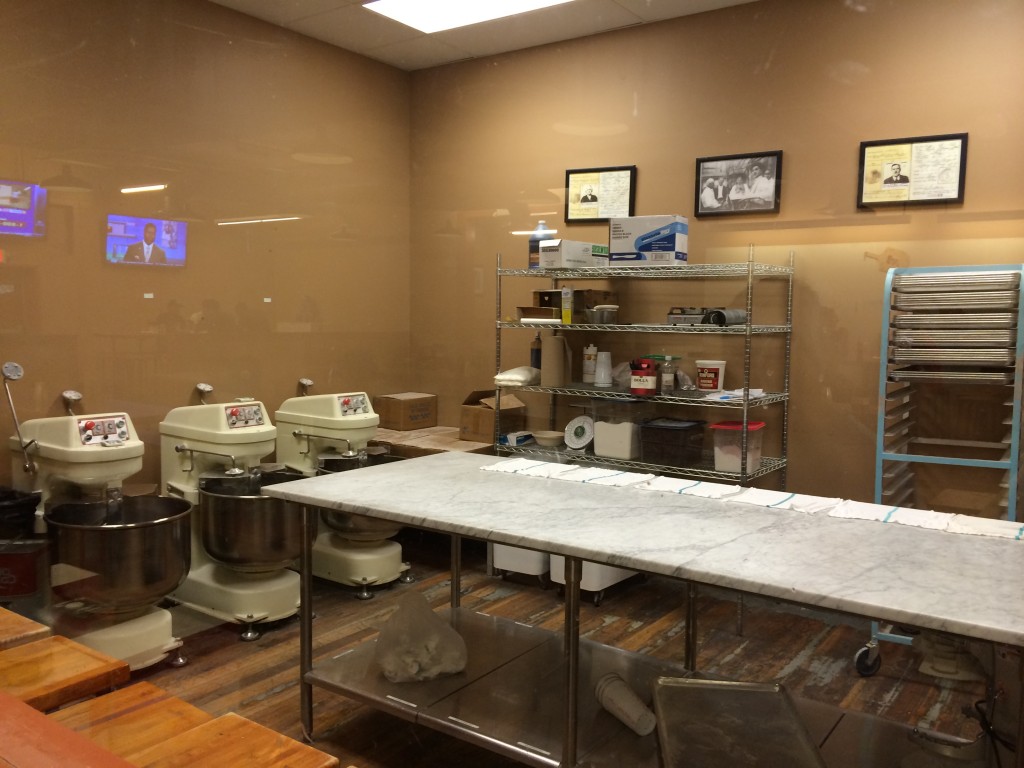 The next few photos are of some oven action. The fresh dough sits out for patrons to admire. Hopefully it doesn’t dry out! On busy days this isn’t a problem, but things were slow when I was there. They better throw some Saran wrap on there! 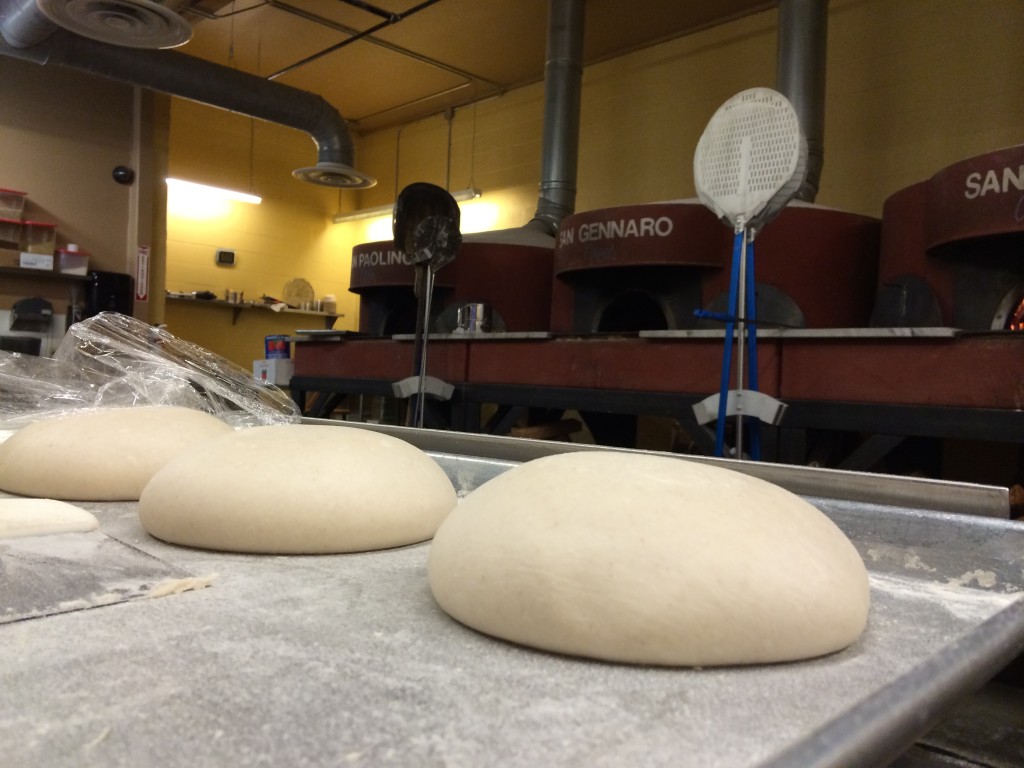 There is a “topping” station in front of the ovens too. DeSano’s is interactive. You can pour olive oil or chili oil on your pies. Or throw on some garlic or parm. 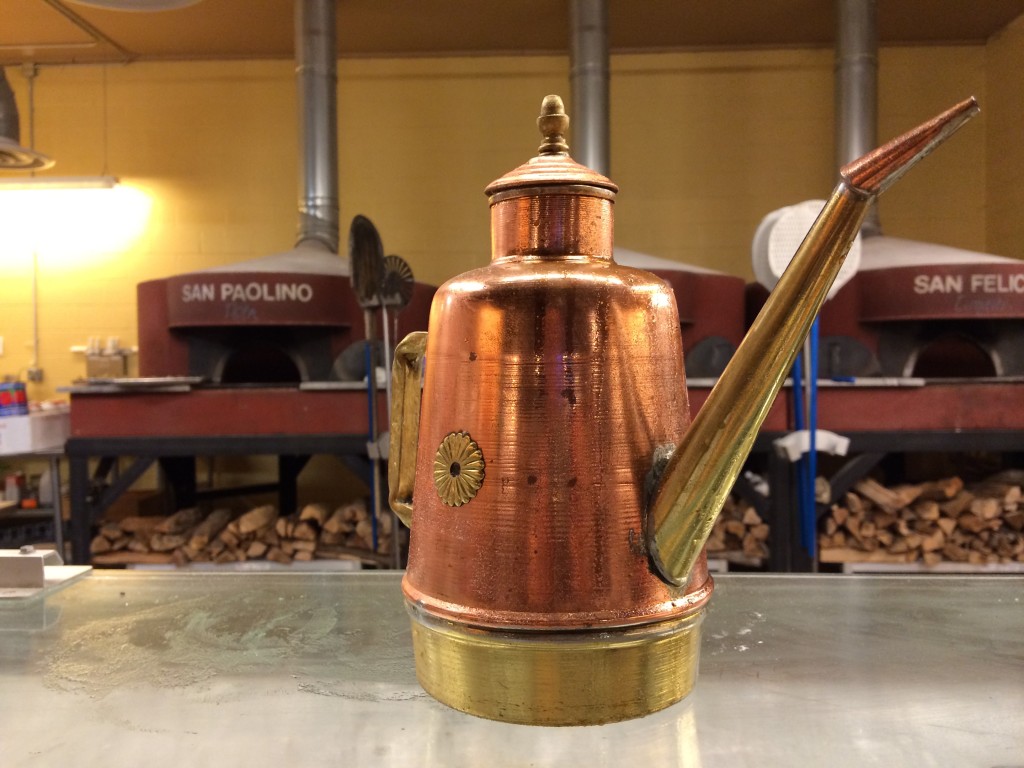 And then there is the show itself. The pizzaiolo doesn’t just stretch your pie on the table, as might be the case at a standard Neapolitan pizza place. No, he tosses it in the air. Want to try it yourself? They have a rubber throw dough sitting out (not pictured) that you can play with. 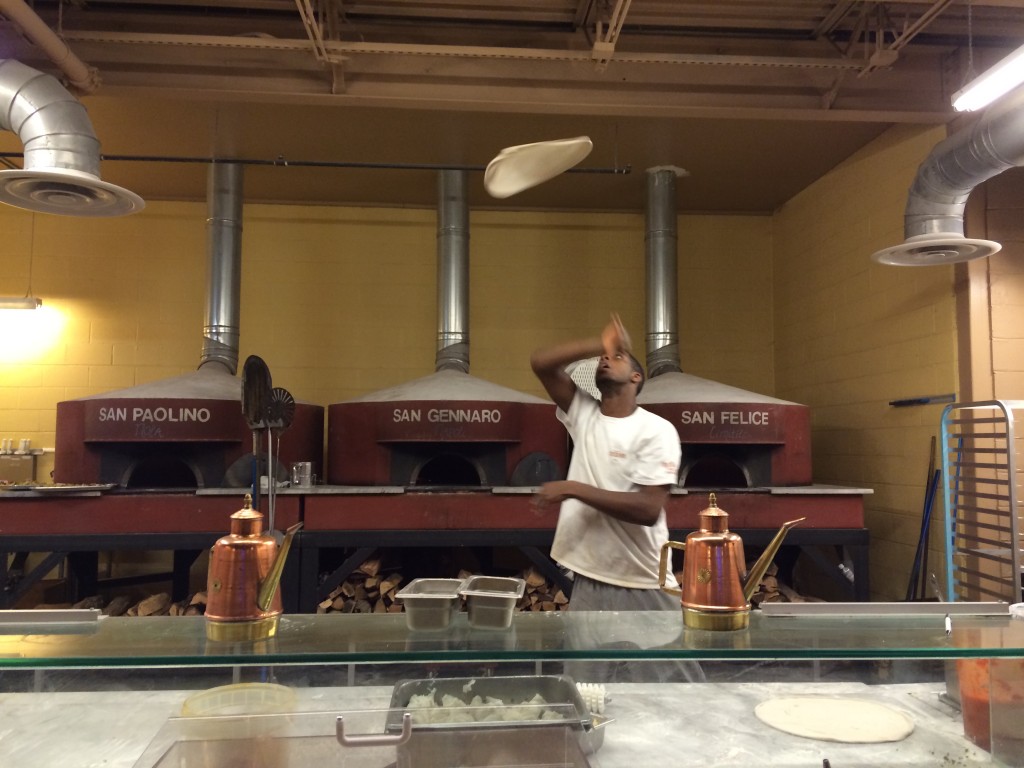 At this point who cares how the pizza tastes? Right? You’ve already gotten your money’s worth. Plus, you’re drinking the beer you brought in. Okay, but seriously… the pizza was decent. This place just puts you in such a good mood that how could it not be tasty? They use high quality ingredients and maybe some of the experience is a little kitschy. But hey — it’s Nashville. Home of biscuits and pancakes. Want people to come out to your pizza place? Well then you need to differentiate yourself somehow. 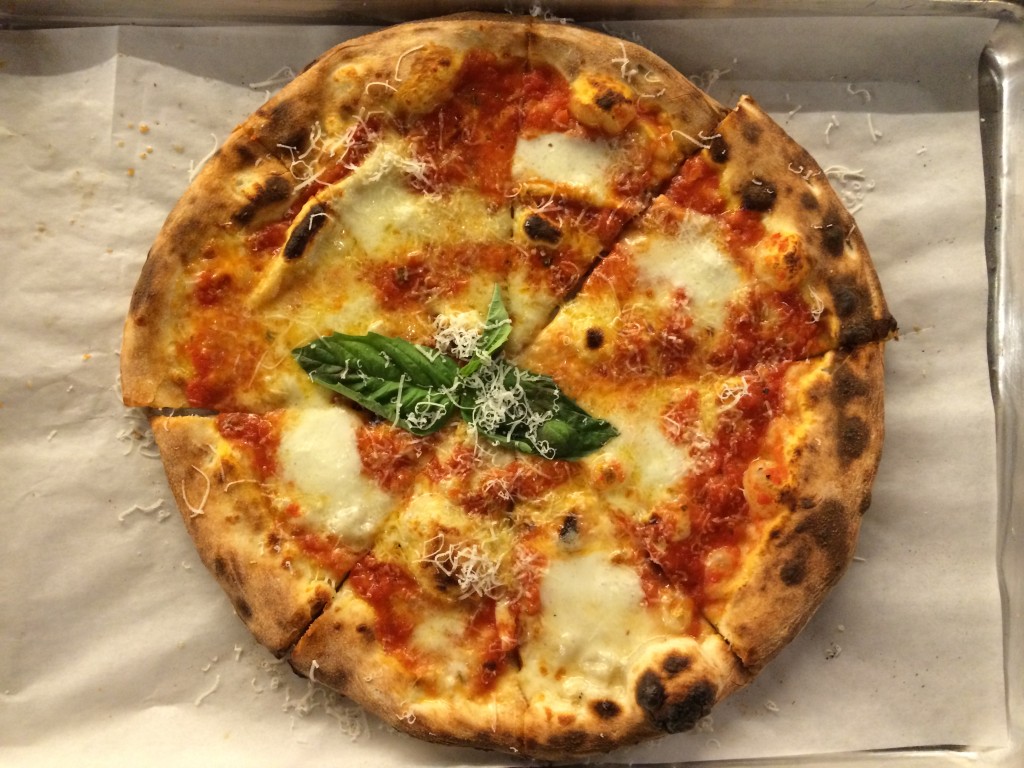 I think I liked the Margherita better than the Pomodorini, but they are both just beautiful to look at. And they’re served on paper lined tin trays… as if you were at a barbecue joint. Notice the grated parm on the pies. Oh yes, I did that myself at the topping station. 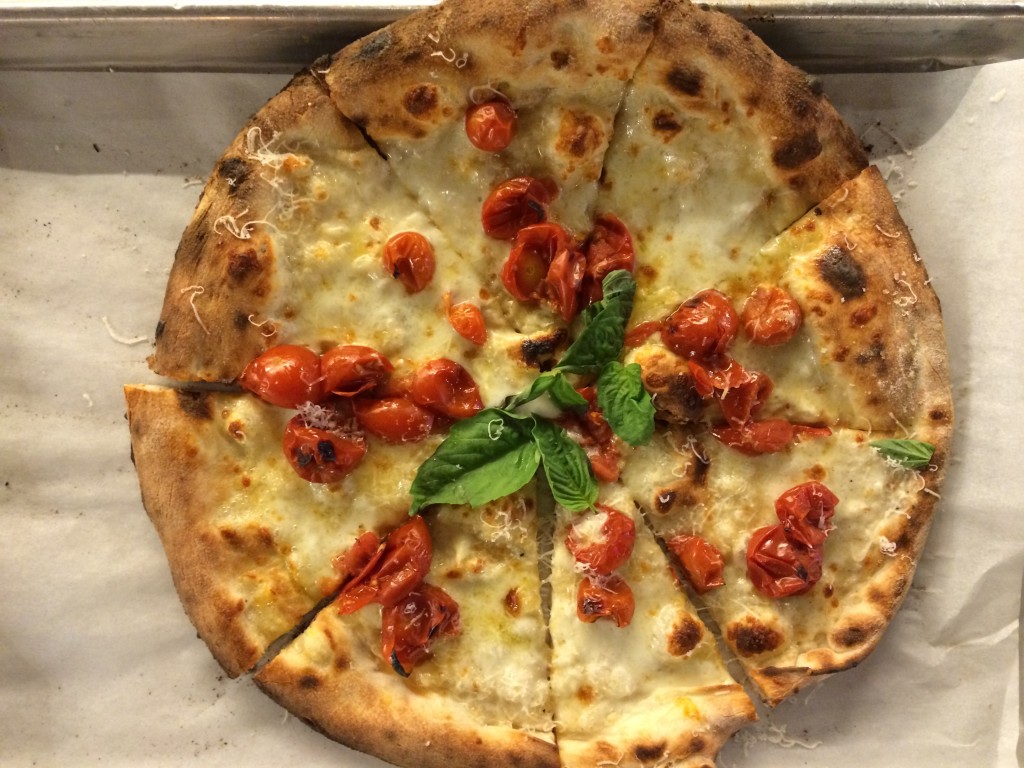 So that’s it, right? Wrong! They also have insanely massive and delicious cannolis available. I like cannolis, but I’m not someone who goes crazy for them. But one glance at the cannoli display by the front counter and I was sold. 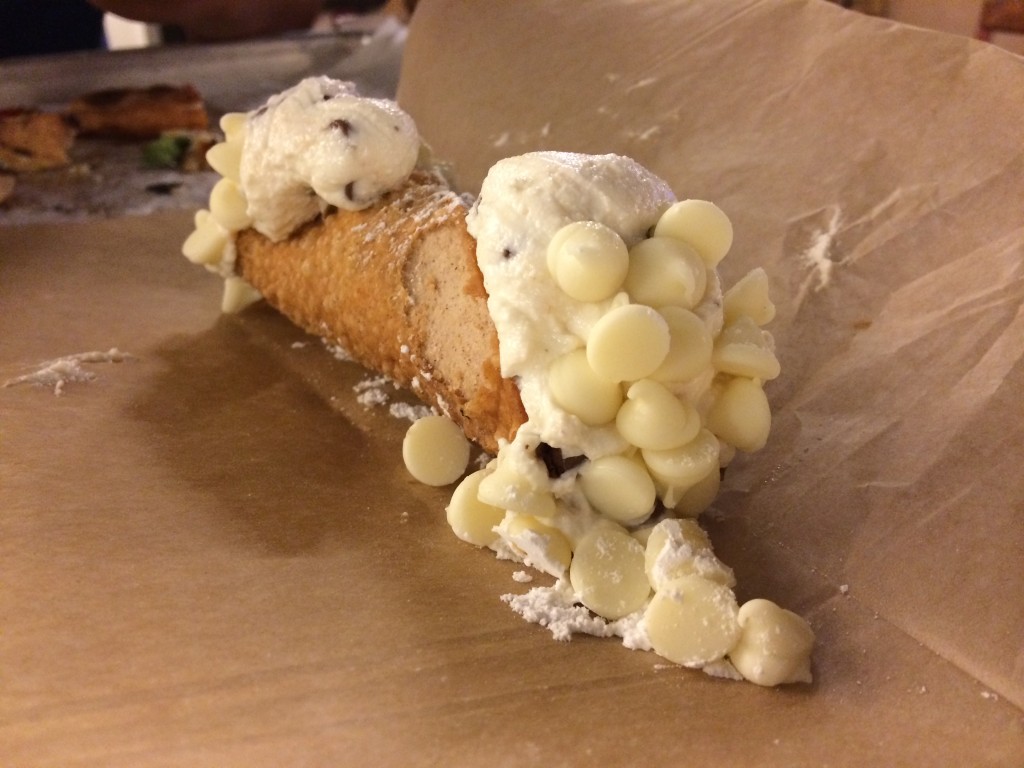 So should you go to to DeSano Pizza Bakery when you’re in Nashville? Yes! Why not? According to their website they also have locations in Los Angeles and Charleston. I could see this concept really taking off in other cities across America. There is an entertainment element, the food is good, and it’s affordable too. And if DeSano’s is successful, I wouldn’t be surprised if similar types of places open their doors in the coming the years. But for now, honky tonk down to DeSano’s and enjoy yourself some good ‘ole pizza!