Cafe Amore vs. Bravo Pizza. That’s what it’s come down to in Union Square. No, they’re not fighting over who can produce worse pizza. It would appear they’re actually fighting over… customers!

The battle intensified recently when this sign popped up in Cafe Amore’s window. Apparently they’ve been around for 20 years (could that really be?) and are offering an interesting deal — a 1/2 priced slice of pizza with the purchase of a soda, which essentially equates to a free soda when you do the math. Tricky!

Anyway, I have to think this is a marketing tactic to try to lure some customers away from Bravo Pizza which recently opened across the street. In fact, the letters on the sign are just large enough that you’d be able to read them from the Bravo Pizza window. Kudos, Cafe Amore. 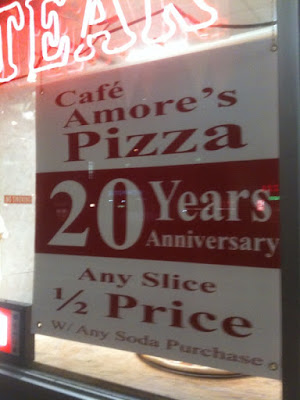 Previous: Washington DC’s RedRocks Takes A Cue From NYC
Next: Pizza And The GMATs… Continued.