All good things must come to an end. Those were my exact thoughts as I exited A Mano (24 Franklin Avenue) in Ridgewood, New Jersey. This massive pizza place was the final stop on a recent New Jersey pizza tour. The last stop is always a dangerous one. You have to make sure you’re not …

Summary : This massive New Jersey Neapolitan pizza places boasts two ovens and seats up to 300 people. Their pies are good, albeit a little on the pricey side, and there are more than two dozen to choose from.

All good things must come to an end. Those were my exact thoughts as I exited A Mano (24 Franklin Avenue) in Ridgewood, New Jersey. This massive pizza place was the final stop on a recent New Jersey pizza tour. The last stop is always a dangerous one. You have to make sure you’re not too full to enjoy the pizza. And you must not be fatigued from all of the pizza eating up to that point. Our travels earlier in the day had taken us to Santillo’s in Elizabeth (639 South Broad Street), Star Tavern in Orange (400 Hight Street), and Ah’ Pizz in Montclair (7 N. Willow Street). 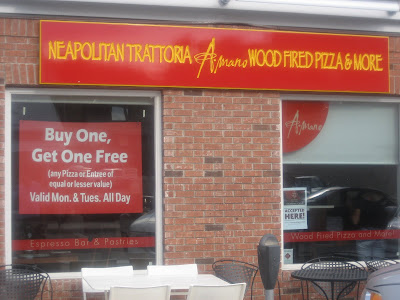 It’s impossible to write about A Mano without first focusing on the space. This bi-level restaurant is massive. Many of New York City’s most popular pizza places seat about 50 people (Does Size Matter?). A large place might hold 100-150. But A Mano is in a different league. Our waitress estimated that the restaurant could hold up to 300 people. To accommodate diners on busy nights there is not one… but two ovens. They are the centerpiece of the restaurant and can be viewed from the majority of tables. There is also a bar on the lower level which serves drinks and handmade gelato. 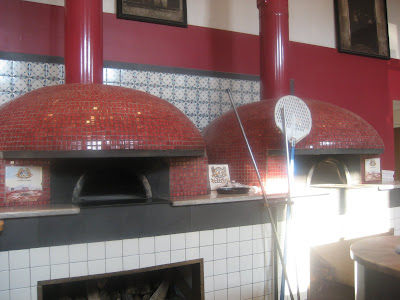 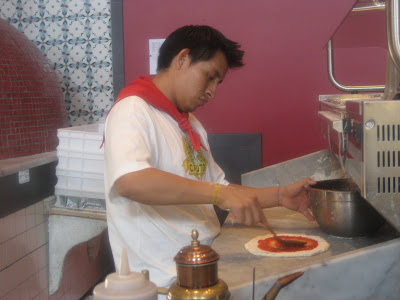 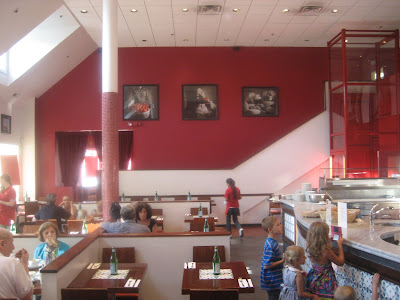 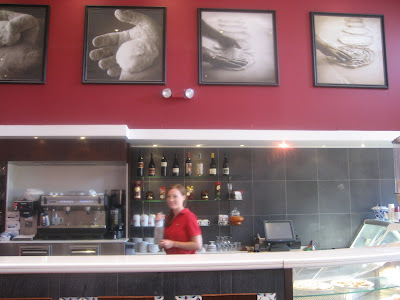 Although a place this size has the potential to come off as cheesy and commercial (i.e. the TGI Friday’s of pizza places), I found many aspects of the restaurant classy. The photographs of pizza above the bar provide a nice setting for a pizza dinner. Unlike Ah’ Pizza — where flat screen televisions hovered over our table — A Mano is able to cater to families while still maintaining the vibe of an authentic Neapolitan pizza place.

One of my concerns about A Mano is that there are 28 pies on the menu. This is by far the most pies I have ever seen on a menu at a Neapolitan pizza place (or any pizza place, for that matter). Although I understand they want to give their large clientele many options, it is impossible to make 28 spectacular pies. A Mano could benefit from shortening it’s menu a bit. I’m in favor of interesting and innovative topping combinations, but I don’t think A Mano would suffer from eliminating their 10-12 least popular pies.

The Margherita ($10.99) was solid, although they went extremely light on the basil as you can see below. At that point, what’s the point of even putting basil on the pie? Everything else about the pie was spot on. The crust was the best we’d had all day — airy and fluffy, yet strong enough to hold the pie together. 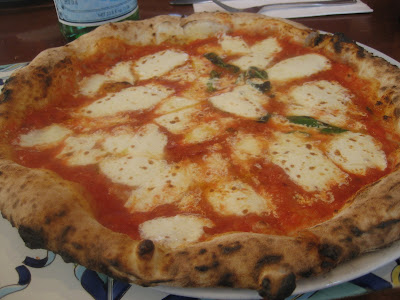 Our group had mixed opinions about the Pear & Gorganzola pie ($16.99). The general consensus was that they skimped on all of the toppings. There was neither enough pear nor gorganzola — especially the latter. In turn, the pie lacked flavor. Personally, I thought the toppings could have been spread out further on the crust, as the last couple of bites of each slice were simply bread. I’m not a huge fan of gorganzola (yes, it’s spelled that way on the menu), so I didn’t mind the fact that the cheese didn’t overwhelm the pie. In turn, I think I enjoyed this pie better than my dining companions. 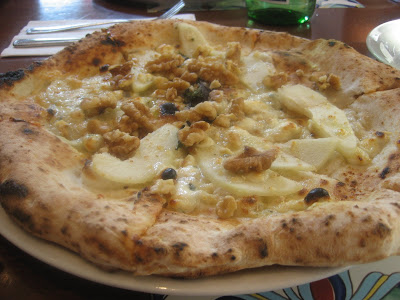 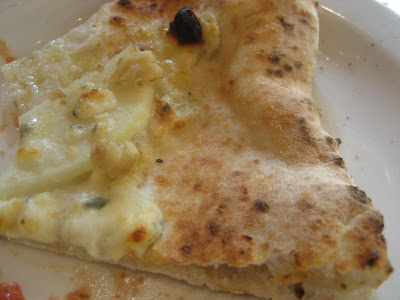 The price of some of A Mano’s pies neared $20.00 and considering the Margherita pie was more expensive than at Paulie Gee’s or Roberta’s, I’d say that A Mano is a bit of a burden on the wallet. Nevertheless, the space is magnificent and the pies are delicious. I’m not that familiar with Ridgewood, New Jersey… but if I had to guess… I’d say this is your best bet for scoring some good pizza in the area. Worth the trip out from New York City? Probably not. But it’s good to know that Jersey can at least give the Big Apple a run for it’s money. Literally.

Previous: Reviews From Around The Interwebs
Next: My First Ever Homemade Pizza: Simply Delicious