* This pizzeria changed its name to Stella Barra in May 2013 The final stop on my summer road trip down the west coast was Los Angeles. And while there are many foods that the city is known for, pizza is not one of them. In fact, Los Angeles is known for having particularly bad …

Summary : In what is generally considered a lackluster pizza city, Stella Rossa is a sceney Santa Monica hangout which produces decent pies -- enough so to warrant a trip there.

* This pizzeria changed its name to Stella Barra in May 2013

The final stop on my summer road trip down the west coast was Los Angeles. And while there are many foods that the city is known for, pizza is not one of them. In fact, Los Angeles is known for having particularly bad pizza. Ask any New York transplant (or east coast transplant, for that matter) and they’ll tell you that nothing in Los Angeles remotely compares to what they’ve had back at home. Although I’ve heard over and over again about the lack of a real pizza scene in Los Angeles, I had no doubt that there would be some decent pizza to find there.

About a month before visiting Los Angeles, I was in the midst of my pizza research for the trip when I came across an article on The Huffington Post that grabbed my attention. As I’d noted in a posting back in July, the author (a food writer, mind you) claimed to have found a place in Santa Monica that serves the best pizzas in the world. He wrote:

After reading such a adamant review of this place, there was no way I was going to step foot and Los Angeles and not visit the place. Stella Rossa Pizza Bar (2000 Main Street) landed itself on the top of my list of “must visit” pizza places. On a Tuesday evening, I met up with five dining companions to find out what the fuss was all about. 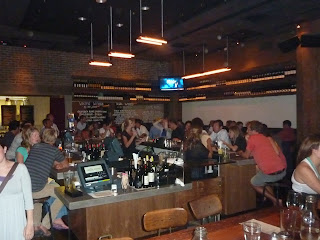 The place has a modern feel to it — almost like you’re at a lounge — fitting for its location in Santa Monica. Unlike in New York City, where you might have to wind your way to the back of a restaurant to be seated, Stella Rossa is essentially a large box. There’s a bar in the middle and tables around it; the open kitchen is in the back. The restaurant was full, although there didn’t appear to be much of a wait the evening we were there.

The menu (which also features some salads and starters) is divided between white pies and red pies. Although there were six red pies and only three white pies on the menu, the white pies sounded more interesting, so we ended up getting two white pies and two red pies. One of the highlights was the Bloomsdale Spinach pie which featured purple kale — a food item (and color!) you don’t usually find on pizza. The Shaved Mushroom pie was solid and rather than your typical pizza greens (basil, arugula, etc) the pie was topped with rosemary, thyme, and torn parsley. The Margherta was tasty, although nothing extraordinary. The same can be said for the Sausage pie.

What really differentiates the pies at Stella Rossa, other than some of the more unusual toppings, is the crust. What might be considered a personal pie by diameter actually ends up being an adequate meal for two people, as the dough is thick and chewy. In fact, once you work your way through the toppings, you’re left with a daunting amount of crust to finish. I’d even say it’s a bit too much.

One of our diners, who will remain anonymous, ended up with a plate like this. A new term was coined that night: a crust graveyard. 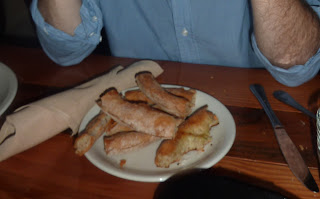 So was this the best pizza I’d ever had? Not a chance. Would I recommend checking it out? Absolutely. I had little time to visit any other pizza establishments in Los Angeles, but I was impressed with Stella Rossa. That’s not to say it’s a place I’d frequent if it was located in New York City. But for a city where it’s hard to find a good pie, Stella Rossa has you covered.

Here are the pies we ate: 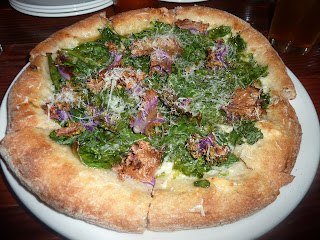 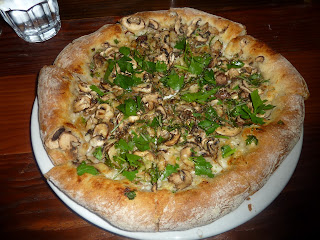 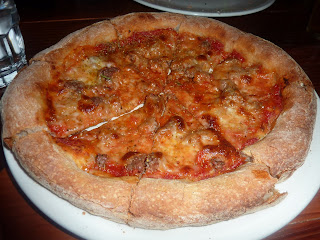 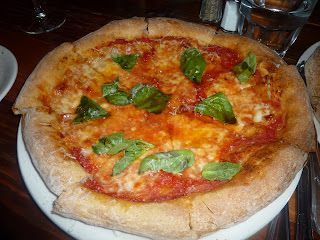 Previous: $7 Pizzas At Fornino All Week
Next: NYC Pizza Run: The Green Factor